Brass, an alloy mainly consist of copper (Cu) and zinc (Zn), is widely used in various industries because of their good formability, high corrosion resistance, strength to weight ratio, and ductility. Auto industries are always in need of light and strong automotive parts. Thus, it is possible to manufacture several parts and products for automobile applications using the brass alloy. Furthermore, high strength brass alloy contains some additional elements such as iron, manganese, tin, etc. These elements form a brittle inter metallic compound in brass, which increase the strength of the alloy but reduce the ductility and machinability [1]. During manufacturing of any parts in industries, the ductility and machinability plays a major role. On the other hand, the mechanical properties such as strength and ductility in the metal alloy are influenced by crystallite size and its distribution [2]. Currently, the crystallite size in nano material is controlled by using various heat treatment processes at certain temperature [3,4]. It is also reported that optimizing the crystallite size in material gives the desired magnetic properties [2]. Furthermore, the heat treatment processes require costly equipment set up and high power supply, to modulate the mechanical properties. Thus, after considering the properties of brass and cost aspect, authors wanted to investigate an alternative and economically safe approach that could be beneficial in global application to modify the physical and structural properties of the brass powder.

The law of mass-energy inter-conversion has existed in the literature for more than 300 years for which first idea was given by Fritz, after that Einstein derived the well-known equation E=mc2 for light and mass [5,6]. However, the conversion of mass into energy is fully verified, but the inverse of this relation, i.e. energy into mass has not yet verified scientifically. Moreover, the energy exists in various forms such as kinetic, potential, electrical, magnetic, nuclear etc. which have been generated from different sources. Similarly, the human nervous system consists of neurons, which have the ability to transmit information in the form of electrical signals [7-10]. Thus, a human has the ability to harness the energy from environment/universe and can transmit into any object (living or non-living) around the Globe. The object(s) always receive the energy and responded into useful way that is called biofield energy. This process is known as biofield treatment. Mr. Trivedi’s Biofield Treatment (The Trivedi Effect(R)) has been applied to transform the structural, physical and chemical properties of various metals and ceramics [11-18]. In material science, this biofield treatment has substantially decreased the particle size by 71% in zirconium oxide [17] and increased the crystallite size up to 66% in vanadium pentoxide (V2O5) [16]. The biofield treatment has also transformed the physical and molecular characteristics in several other fields like biotechnology [19,20], microbiology [21-23], and agriculture [24-26].

Where, ( d50)Control and ( d50)Treated are the particle size, d50 of control and treated samples respectively.

XRD analysis was carried out on Phillips, Holland PW 1710 X-ray diffractometer system, which had a copper anode with nickel filter. The radiation of wavelength used by this XRD system was 1.54056 Å. The data obtained from this XRD were in the form of a chart of 2θ vs. intensity and a detailed table containing peak intensity counts, d value (Å), peak width (θ°), relative intensity (%) etc. Additionally, Powder X software was used to calculate lattice parameter and unit cell volume.

The crystallite size (L) was calculated by using formula:

Here, λ is the wavelength of radiation used and k is the equipment constant (=0.94), b is full width half maximum of peak (FWHM). The percentage change in all parameters such as lattice parameter, unit cell volume and crystallite size were calculated using the following equations:

Where, ac and at are lattice parameter value of control and treated powder samples respectively

Where, Vc and Vt are the unit cell volume of control and treated powder samples respectively

Structure and surface morphology are the unique properties of brass powder. Control and treated brass was observed using JEOL JSM-6360 SEM instrument at 2000x magnification. Differences in the tendency of the particles to clump were easily seen at the lower magnifications, while variations in size and morphology become clearer at higher magnification [27]. 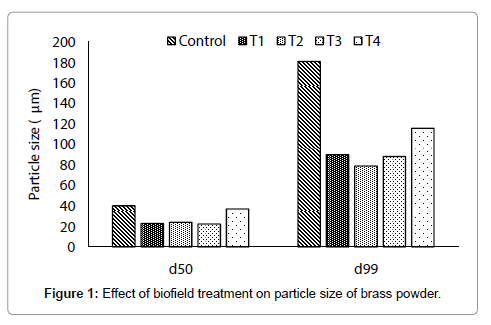 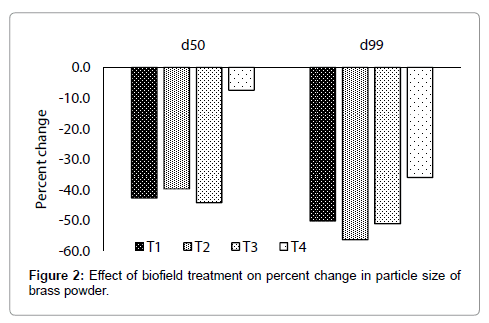 XRD analysis result of control and treated brass are illustrated in Figures 3-5. It was observed that lattice parameter and unit cell volume increased up to 0.06% and 0.19%, respectively as compared to control (Figure 3). Furthermore, it is well known that stress and volumetric strain have direct relationship as per Hooke’s law, which is given as follow [28]: 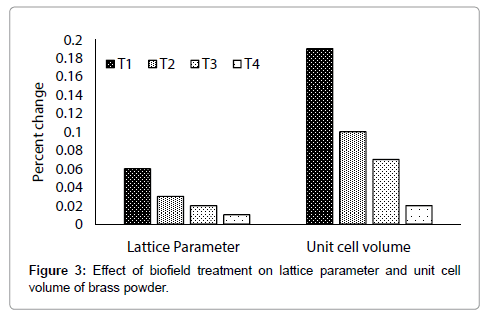 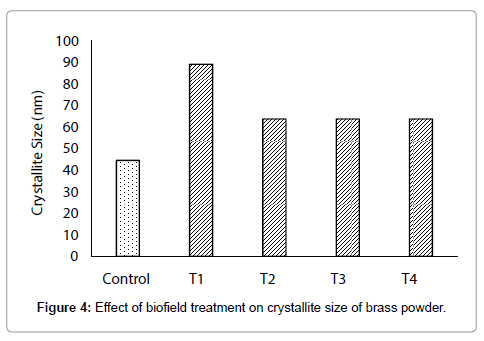 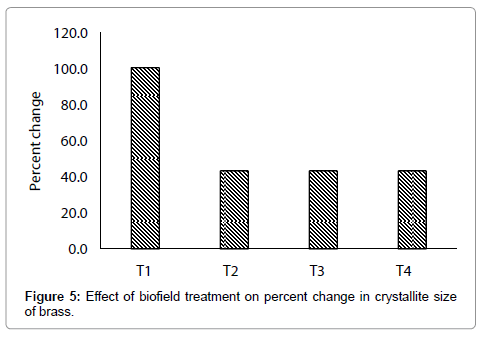 Figure 5: Effect of biofield treatment on percent change in crystallite size of brass.

Where, σ is stress applied, K is bulk modulus, and ε is volumetric strain

On the basis of particle size result, the reduction was found maximum in T1 as compared to other groups, thus it was further analysed microscopically using SEM. Surface morphology of control and treated brass powder are shown in Figure 6. Control brass sample shows the atomized, tear drop shaped welded particles, whereas fractured at satellites and intra particle boundaries were observed in treated brass sample. It indicates that brass powder particles were fractured after biofield treatment. Similar kind of surface morphology was also observed in biofield treated lead powder [15]. Thus, it is speculated that the biofield treatment may induced stress energy that resulted into high energy milling. Further, this high energy milling probably induced fractures in the particles. Figure 6: PostThe SEM image of (a) control and (b) treated brass powder (T1).

The FT-IR spectrum of control and treated sample (T1) of brass are presented in Figure 7. In IR spectra, the band observed at wave number 3450 cm-1 (control) and 3439 cm-1 (treated) were assigned to O-H stretching due to water absorption by samples. Band at wave number 1652 cm-1 (control) and 1637 cm-1 (treated) were attributed to H-O-H bending vibration [30]. The absorption peak at wave number 792 cm-1 observed in control and treated sample was attributed to Zn–O–H and Cu-O-H vibrations. In addition, a new peak was found at wave number 685 cm-1 in IR spectra of treated brass as compared to control that might be due to Cu2O vibrations [31]. It is hypothesised that biofield energy may be acting at atomic level to cause this modification. 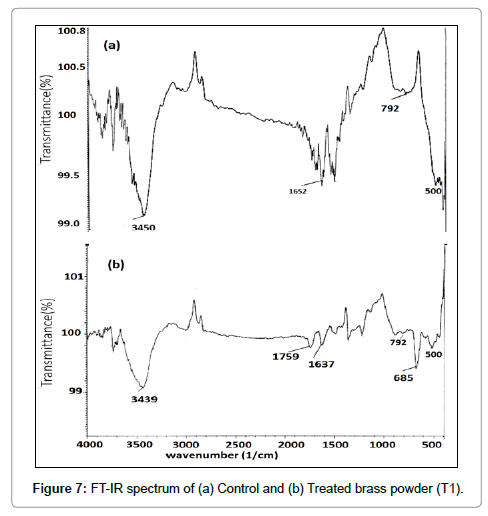 We thank Dr. Cheng Dong of NLSC, Institute of Physics, and Chinese academy of Sciences for their support in using Powder X software for analyzing X-ray Diffraction results.