Copyright: © 2015 Manoj K, et al. This is an open-access article distributed under the terms of the Creative Commons Attribution License, which permits unrestricted use, distribution, and reproduction in any medium, provided the original author and source are credited.

Chromium oxides gain significant attention due to their diverse technological application in various industries. Chromium based oxides are used in various chemical reactions due to their wide range of oxidations states, it includes CrO2, Cr2 O3, Cr2O5 and CrO3 etc [1]. Out of these, chromium oxides, CrO3 is an important compound for automobile industries due to its high corrosion resistance properties. In these industries, CrO3 is used for plating the chromium on car body and other auto components. In addition, it is a strong oxidising agent, which enables it to be used in various pharmaceutical and chemical industries [2,3]. It is also reported that Cr (VI) complexes exhibit the antibacterial activity against Pseudomonas aeruginosa bacteria [4]. In crystal structure of CrO3, its molecules form the chains of CrO4 tetrahedra, which are linked at corner oxygen [5]. Furthermore, the crystal structure parameters such as lattice parameter, unit cell volume of CrO3 play a crucial role in modulating its chemical and physical properties. Thus, based on the above applications of CrO3 powder, authors planned to investigate an approach that could modify its physical, thermal and structural properties.

In physics, energy is a property of object which can be transferred to other objects, but it neither be created nor be destroyed. Albert Einstein proposed the relationship between mass and energy i.e. E=mc2 [6]. This energy can be transferred through various processes such as thermal, chemical, kinetic, nuclear etc. Similarly, human nervous system consists of neurons, which have the ability to transmit information in the form of electrical signals [7-9]. Due to this, a human has ability to harness the energy from environment/universe and can transmit into any object (living or non-living) around the Globe. The object(s) always receive the energy and responded into useful way that is called biofield energy. This process is termed as biofield treatment. Mr. Trivedi’s unique biofield treatment (The Trivedi Effect®) is known to alter the physical, structural and atomic characteristic in various metals [10-12] and ceramics [13]. Additionally, the impact of biofield treatment has been studied extensively in various fields such as microbiology [14,15], biotechnology [16,17], and agriculture [18-20]. Moreover, biofield treatment has significantly altered the particle size and crystallite size in zinc powder upto six and two folds, respectively [21]. In addition, it has substantially altered the unit cell volume and molecular weight in vanadium pentoxide [13]. Thus, based on the literature and excellent outcomes of biofield treatment, authors interested to investigate the effect of biofield treatment on physical, thermal and structural properties of CrO3 powder.

The CrO3 powder was purchased from Sigma Aldrich, India. The sample was equally divided into two parts, considered as control and treated. Treated group was in sealed pack and handed over to Mr. Trivedi for biofield treatment under laboratory condition. Mr. Trivedi provided the biofield treatment through his energy transmission process to the treated group without touching the sample. The control and treated samples were characterized using Thermo gravimetric analysis-differential thermal analysis (TGA-DTA), X-ray diffraction (XRD), and Fourier transform infrared spectroscopy (FT-IR).

Where, T Control and T Treated are the melting point of control and treated samples, respectively

Similarly, percent change in ΔH and Tmax were calculated.

XRD analysis of control and treated CrO3 powder was carried out on Phillips, Holland PW 1710 X-ray diffractometer system, which had a copper anode with nickel filter. The radiation of wavelength used by the XRD system was 1.54056Å. The data obtained from this XRD were in the form of a chart of 2θ vs. intensity and a detailed table containing peak intensity counts, d value (Å), peak width (θ°), relative intensity (%) etc. Additionally, PowderX software was used to calculate lattice parameter and unit cell volume of CrO3 powder samples. Weight of the unit cell was calculated as, molecular weight multiplied by the number of atoms present in a unit cell.

The crystallite size (G) was calculated by using formula:

Here, λ is the wavelength of radiation used, b is full width half maximum (FWHM) and k is the equipment constant (0.94). Furthermore, the percent change in the lattice parameter was calculated using following equation:

Where A Control and A Treated are the lattice parameter of treated and control samples respectively. Similarly, the percent change in all other parameters such as unit cell volume, density, molecular weight, and crystallite size were calculated.

FT-IR spectroscopic analysis was carried out to evaluate the impact of biofield treatment at atomic and molecular level like bond strength, stability, and rigidity of structure etc. [22]. FT-IR analysis of control and treated CrO3 samples was performed on Shimadzu, Fourier transform infrared (FT-IR) spectrometer with frequency range of 300- 4000 cm-1 was used. 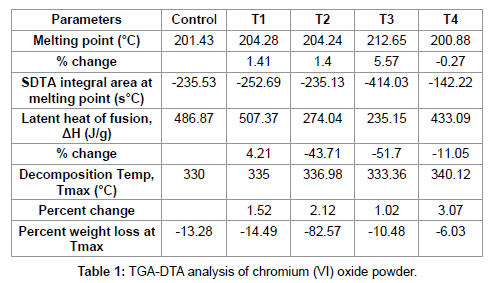 Figure 1: XRD pattern of chromium (VI) oxide powder. (a) Control and (b) Treated. 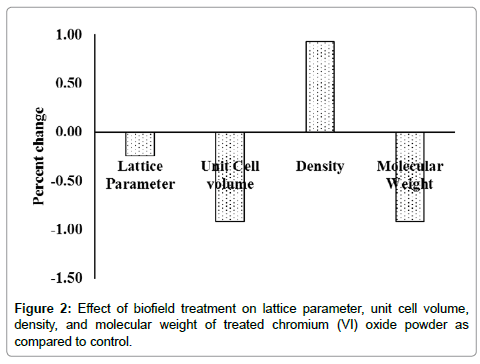 FT-IR spectrum of control and treated are shown in Figure 3. IR spectra exhibited the absorption peaks at 496, 736, 906, and 944 cm-1 in control, whereas these peaks were shifted to higher wavenumber i.e. 501, 741, 919, and 949 cm-1 in treated CrO3 spectra. The peaks at 906 and 944 cm-1 in control and 919 and 949 cm-1 in treated CrO3 can be attributed to chromyl (Cr=O) vibrations [30]. The wavenumber observed in IR spectra is directly proportional to bond force constant. Thus it is assumed that the increase in wave number for Cr=O vibration could be due to increase in bond force constant after biofield treatment.In our previous study on iron oxide, biofield treatment had altered the bond strength of Fe-O bond [25]. Thus, it is hypothesized that the energy transferred through biofield treatment probably enhanced the Cr=O bond strength in treated CrO3 molecules, which may lead to increase bond force constant, thus increase the wavenumber. In addition, the increase in Cr=O bond strength could increase the stability of CrO3 molecules. It is also supported by increase in thermal stability of treated CrO3 after biofield treatment. 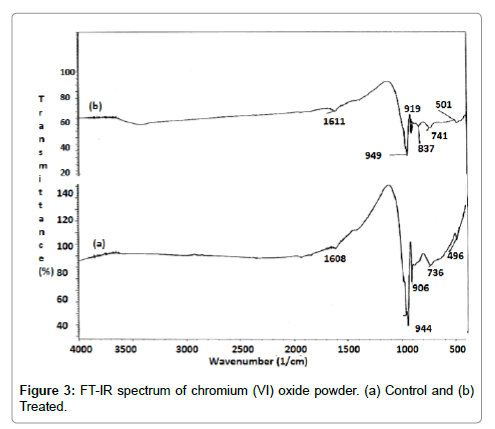 Figure 3: PostFT-IR spectrum of chromium (VI) oxide powder. (a) Control and (b) Treated.

Authors gratefully acknowledged to Dr. Cheng Dong of NLSC, Institute of Physics, and Chinese academy of Sciences for providing the facilities to use PowderX software for analyzing XRD data. Authors also would like to thank Trivedi Science, Trivedi master wellness and Trivedi testimonials for their support during the work.