Copyright: © 2015 Nasser MG. This is an open-access article distributed under the terms of the Creative Commons Attribution License, which permits unrestricted use, distribution, and reproduction in any medium, provided the original author and source are credited.

Insects are the most dominant group of animals on earth. They were invading the land about 400 million years ago during Devonian Period [1]. From these days, they occupied their niches in every corner of our terrestrial ecosystems including some fresh water habitats. Ranging from very small snow flea Hypogastrura nivicola (Fitch, 1846) of order Collembola in Arctic to large three-horned rhinoceros beetle Chalcosoma moellenkampi Kolbe, 1900 of order Coleoptera in Borneo tropics, the insects had all extremes of behavioral, morphological and physiological features that help them to achieve such evolutionary success. Their impressive story based on many different factors such as: possessing wings, external skeleton and huge progeny [2], but they seemed to fail in marine ecosystem exams leaving the space to their crustacean cousins to dominate. Seas with their high salinity, rhythm tides, surges weather and raging waves stand agnist the spread of Hexapoda on the largest ecological habitat of our planet, but these never ban them to be there. Yes, there is a great absent of large insect groups in marine habitats [3] however on the background there are very tiny insects adaptive themselves in completely different way to be one of few representative of Class Insecta in our marine mega fauna. These are the chewing Lice. Chewing lice are ectoparasites of order Phthiraptera. They are very small insects that act as parasites of birds and mammals. With about 4000 species they form one of the most diverse parasitic insects on Hexapoda [4]. These insects are completely permanent ectoparasites that spend their entire life on the bodies of their hosts and they feed mainly on feathers, dry flakes of dead skin and other debris that available by their hosts [5]. These insects are completely adapted to their way of life as they are very small to hide through their hosts feathers or hairs and armed with characteristic chewing moth parts and hanging legs to firmly attach to hosts bodies. Such adaptation confirmed their ability to invade the marine life through the bodies of sea birds [6]. There are more than 1600 species and sub-species of chewing lice recorded from marine birds [7]. Beside their relative of sucking lice of Pinniped, they form the largest insect group in the marine ecosystem. They recorded from all orders of sea birds including: marine Anseriformes, Charadriiformes, marine Falconiformes, Pelecaniformes, Procellariiformes and Sphenisciformes (Figure 1). They also found through all of our seas and oceans from Carduiceps lapponicus Emerson, 1953 of Bar-tailed godwit Limosa lapponica (L., 1758) of Pacific Ocean [8], Saemundssonia hexagona (Giebel, 1874) of Red-tailed tropicbird Phaethon rubricauda Boddaert, 1783 from tropical coasts [9] to Austrogoniodes mawsoni Harrison, 1937 of Emperor penguin Aptenodytes forsteri Gray, 1844 from Antarctica seas [10]. The distribution pattern of chewing lice among sea birds varied greatly from cosmopolitan species such as Saemundssonia lari (Fabricius, 1780) that infected almost all the gulls’ species of the planet (Figure 2) [11] to very restrictedly distributed species that infesting some endemic marine birds such as Eidmanniella nancyae Ryan and Price, 1969 which infested vulnerably endangered Socotra Cormorant Phalacrocorax nigrogularis Ogilvie-Grant and Forbes, 1899 around the Arabian Peninsula (Figure 3) [12]. The studying of chewing lice of wild birds forms a very interesting branch of entomology especially for species that parasitized marine birds. The important of achieving a complete understanding of surrounding fauna of any country form the main trigger for investigating such minute insects. The information concerning host/parasite interaction and distribution is also very valuable to study sea birds phylogeny and evolution [13]. Penguins chewing lice phylogeny of genus Austrogoniodes and Nesiotinus were studied and the result indicate potential instances of co-speciation between these lice and their host birds and consequently betterresolving of penguin phylogeny [14].The distribution pattern and host switching events of chewing lice among sea birds is of great significance especially for islands ecosystems. Recently, White cheeked tern Sterna repressa Hartert, 1916 were examined for chewing lice for the first time in two different islands in Arabian Gulf and the result indicated that each population has its own chewing lice parasite of genus Saemundssonia [15]. This may point out that the two populations are reproductively isolated from each other and such kind of ecological information is well worth for conservation biologists. Although the present of great heritage of chewing lice knowledge and species records from marine birds, the way is still very far from achieving complete understanding of these characteristic creatures. More and more new species of these insects discovered from sea birds every year [16,17]. Little is known about their biology, ecology and physiology [6]. A lot of marine birds are still never checked for chewing lice before [7]. Many obstacles usually face the scientists working in this field including: shortage in the number of peoples interesting in this group of insects, minimum requirements of ornithological knowledge either to collect or interpret the data by the entomologists working in this field, access to remote islands and sea birds breeding places which usually prohibited, catching these birds without harming them or their breeding populations. So, A lot of efforts are needed to achieve better apprehend the role of these insects in our marine ecosystems. 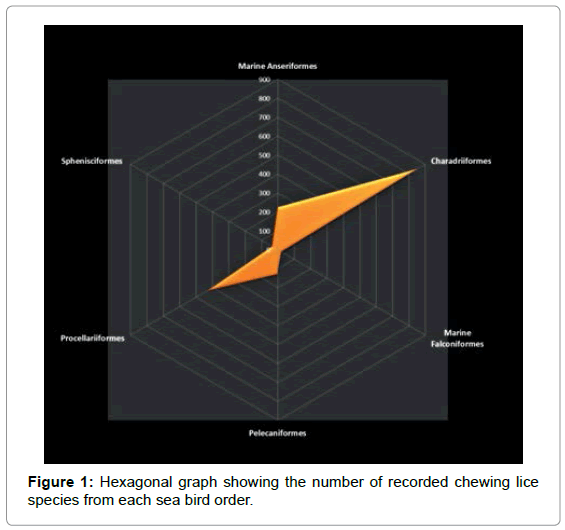 Finally, through the body of these birds flying around our harbors, diving under water for food, running in front of you on the shore or breeding on very far islands, there are small insects that chose their way to defy the odds of marine habitats to consummate the domination of their terrestrial relatives on the land and to well-deserved the title tiny insects in raging seas.