Choroid Plexus Calcification in a Case of Very Early Onset Schizophrenia: Coincidental or a Marker?

Copyright: © 2015 Kilic B, et al. This is an open-access article distributed under the terms of the Creative Commons Attribution License, which permits unrestricted use, distribution, and reproduction in any medium, provided the original author and source are credited.

Background: Early-onset schizophrenia is a neurodevelopmental disorder and its etiology is not entirely elucidated. Choroid plexus, contains serotonin namely 5 hydroxy tryptamine (5-HT) neurons, and the choroid plexus calcification seen in schizophrenia can be associated with altered 5-HT innervation patterns.

The choroid plexus (CP), which is an integral part of the blood brain barrier, is composed histologically of particularly vascular parts of fetal pia-arachnoidal membranes. It plays some roles, for example, in protecting the brain and providing an entrance gate to displaying the activity of psychotropic drugs, as well as secretion of cerebrospinal fluid (CSF). Choroid plexus calcification (CPC) often results from calcium and sometimes iron, and may be physiological or pathological. It can be recognizable radiologically [2].

A 16-year-old female patient was admitted with her family for various complaints such as thoughts that people would hurt her, the idea of chasing her and of putting poison in her own food, sudden anger and aggression, laughing without any reason, self-talk and introversion. It was discovered that the first complaints started with symptoms such as tall men wearing black clothes, ghosts, sighting of shadow people, and hearing her own name and noise for 4 previous years. During this period, our patient’s achievements significantly diminished and her self-care skills also suffered. This was followed with irregular intervals in psychiatry clinic where she was admitted because of these complaints throughout 3 years. This patient with a suspected psychotic disorder used medications including risperidone, citalopram, aripiprazole, and trifluoperazin. There has been a significant improvement with drug therapy.

Based on the psychiatric examination and DSM-V diagnostic criteria, she was admitted to an adolescent psychiatry service with a diagnosis of schizophrenia. Neurological examination was normal. Cranial computed tomography (CT) revealed calcification in the bilateral CP and pineal gland and cerebellar atrophy. CPC was located in the atrium of both ventricles, and its size was 12.5 mm and 13.5 mm in the central anteroposterior and right ventricle, and in the left ventricle, respectively (Figure 1). Electroencephalography was normal. The amount of calcium, phosphate, magnesium, levels of vitamin D, parathyroid and thyroid hormones were found within the normal ranges. No organic cause was found for the CPC. She was discharged with risperidone therapy after a one-month follow-up. 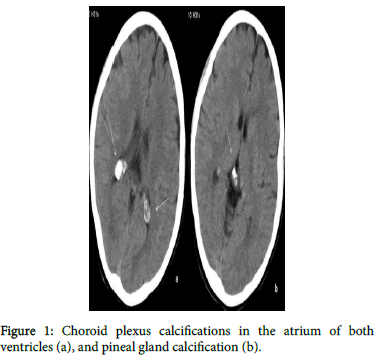 Figure 1: Choroid plexus calcifications in the atrium of both ventricles (a), and pineal gland calcification (b)..

This paper presents an adolescent patient having an association between very early onset schizophrenia and bilateral macro CPC. Agerelated physiological, congenital, infectious, endocrine, metabolic, vascular and neoplastic causes are known to be implicated in the etiopathogenesisof CPCs. This reason is not well understood although it assumes that physiological calcifications are associated with aging or degenerative changes.

CPC incidence increases with increasing age. Modic et al. [3] examined about 1,000 consecutive CT scans for calcification of the choroid plexus, and found that the incidence of calcification ranged from 0.5% in the first decade of life to 86% in the eighth decade. Relevant literature overlaps with the CPC seen in our patient and with the patient’s clinical picture. Sandy et al. [4] suggest that CPC size positively correlated with intensity of hallucination, and was unrelated to delusions, conceptual disorganization, grandiosity, excitement and global Brief Psychiatric Rating Scale psychopathology score, but might be a major marker for hallucinations seen in schizophrenia. The same study found that CPC was not related to patients’ age, sex, age at onset of psychiatric illness, duration of psychiatric illness, duration of patients’ education, and present IQ [4,5]. There was a significant relationship between CPC and depressive symptoms seen in patients with schizophrenia, this coincided with a change in the 5-HT functions of CPC. CPC might be useful as a marker of suicidality in patients with schizophrenia and bipolar disorder [5]. It is also reported that pineal calcification may serve as a marker of hallucinations in schizophrenia [6]. In our case, we also observed hallucinations, delusions and severe negative symptoms with bilateral CPC and pineal calcification.

It has been noted that CPC was associated with the atrophy in brain, and with important cognitive dysfunction, persistence of negative symptoms, decline in social functioning, incomplete remissions and multiple hospitalizations in a recent study, which suggests that cerebellar atrophy is especially related to severe cognitive impairment and resistance to treatment [2]. Cerebellar atrophy was present in our case, in which severe negative symptoms, marked cognitive impairment and partial response to treatment were observed.

The CP contains a high density of 5-HT (5-HT 1C and 5-HT 2C) receptors. 5-HT increases blood flow in the CP, thereby increasing the permeability and secretory activity of the epithelium of the CP. 5-HT elevates intracellular levels of calcium in CP epithelium by acting 5-HT receptors and increasing calcium [Ca2+] influx. A decrease in 5-HT functions in the CP could lead to a reduction in metabolic activity, which results in a fall of CSF production, and this reduction in metabolic activity of CP damage, and may be a predisposition to calcification. So, altered serotonergic innervation patterns can facilitate the process of calcification [7].

The blood-brain barrier is permeable to (Ca2+) ions, which control the neurotransmitters and function of NMDA receptors. Reduction of the NMDA receptors is responsible for the etiopathogenesis of schizophrenia [8]. The excessive (Ca2+) entry into neurons produces excitotoxicity and destruction of neurons whilst reduced extracellular (Ca2+) decreases the stimulation of NMDA receptors. CPC could be an important marker, which suggests that such a mechanism leads to brain damage.

In conclusion, CPC may particularly be a neuroimaging marker for very early onset schizophrenia; a finding that needs further research.