Copyright: © 2014 Cammann S, et al. This is an open-access article distributed under the terms of the Creative Commons Attribution License, which permits unrestricted use, distribution, and reproduction in any medium, provided the original author and source are credited.

Background: Stenosis of a biliodigestive anastomosis is a rare complication of mid- and long-term survival after hepatobiliary surgery. First line therapy is endoscopic intervention. Only if this option is not successful or not possible a surgical approach is indicated.

Case Report: A 40 year old male patient presented with recurrent episodes of cholangitis after hepaticojejunostomy due to neuroendocrine tumor in the common bile duct more than 17 years ago. Advanced endoscopic techniques and percutaneous drainage failed to overcome this disorder resulting in subsequent surgical therapy. During the first operation the bile duct could not be found in order to create sufficient bile drainage. However, during preparation of the liver hilum the portal vein was inadvertently hurt. Following vessel reconstruction the patient suffered from recurrent thrombosis of the vein in the course and since the bile duct could not be identified and arrosion bleeding caused acute liver failure the patient was listed for liver transplantation. The latter was successfully performed allowing complete recovery of the patient.

Conclusion: In case of stenosis of a billiodigestive anastomosis and unsuccessful reconstruction of sufficient bile drainage despite extended surgical efforts or following complications during revision liver transplantation might be a good option for the treatment of patients in exceptional cases.

Biliodigestive anastomosis (BDA) is performed for different reasons such as cancer of the bile duct system or after liver resections. It is performed as hepaticojejunostomy or rarely as hepotoduodenostomy. Although it is harder to reach the bile duct via endoscopic retrograde cholangiography (ERC), hepaticojejunostomy is widely accepted as standard [1]. Stricture of a BDA is a rare but severe complication which can cause cholangitis and secondary liver cirrhosis. It requires advanced medical care by an interdisciplinary team. Although there is little evidence in dealing with stenosis of BDA, the first step in diagnosis and treatment usually is an endoscopic intervention [2]. Dilatation-if necessary with stenting-should then be performed. In a small number of cases endoscopy fails to solve this problem. Then-according to prior agreement with the patient-either permanent percutaneous transhepatic cholangiodrainage (PTCD) or surgical therapy is indicated. Revision of the anastomosis includes high risk of further complications like re-stenosis or injury of other structures in the liver hilum. Peritoneal dissemination is another risk in case of malignant tumors.

We here present the case of a 40 year old male patient with stenosis of a biliodigestive anastomosis. The patient was firstly operated 17 years ago due to a neuroendocrine tumor in the common bile duct and hepaticojejunostomy was performed. In the course he was diagnosed with cystic echinococcosis and pericystectomy in the right lobe of the liver was carried out [3]. After a few months a liver abscess in the area of the hydatid cyst developed that was drained interventionally. Three years before the actual hospitalization the patient started to suffer from recurrent cholangitis with fever and mild jaundice. Initially these episodes were successfully treated with antibiotics and ursodeoxycholic acid. When the frequency of these cholangitis episodes increased, ERC was performed for diagnosis and extension of treatment. While the left bile duct was successfully intubated, it was impossible to gain access to the congested right bile system (Figure 2B) even with balloon-assisted endoscopy. Finally, with the patient suffering from permanent cholangitis, PTCD of the right bile system had to be done. Retrograde filling of this percutaneous drainage with contrast agent showed connection to the Y-loop (Figure 1) but there was no possibility to enter the loop because of high-grade stenosis. Even all attempts to intubate the afferent loop in rendezvous-technique with PTCD failed. Due to severe impairment of the patient´s medical condition and unsuccessful treatment, in the end the decision was made to perform surgery in our hospital, which is a tertiary referral center for hepatobiliary surgery, and renew the cicatrized anastomosis. Following laparotomy, hypertrophy of the left liver lobe was observed while the right lobe was completely atrophied most likely due to partial occlusion of right hepatic vein by thrombosis and previously known BDA-stenosis. Because of atrophy (Figure 2A) and a suspected relapse of echinococcosis we decided to resect right lobe of liver as the first step. Histology later showed chronic inflammation with mild cirrhosis. After this, preparation of the liver hilum began. Despite intraoperative cholangiography via PTCD and preparation deeply into the parenchyma [4] it was not possible to locate a bile duct to perform a new biliodigestive anastomosis. Since also no intrahepatic duct could be prepared to perform the anastomosis with, a last attempt was made at the hilum. Unfortunately, during this attempt the portal vein was injured accidentally due to massive adhesions with the lesion containing of more than 50% of the veins circumference. Successful reparation of the vessel with an end-to-end anastomosis could be performed. Nonetheless, the bile duct still could not be found and the abdomen was temporarily closed. In the following days the patient suffered from recurrent thrombosis of the portal vein at the intensive care unit. When arrosion bleeding of a right diaphragm artery caused acute-on-chronic liver failure the patient was listed for high-urgency liver transplantation at EUROTRANSPLANT with a MELD-Score of 32 and continuous need of blood products like fresh frozen plasma and fibrinogen. At this time liver enzymes had risen to 2294U/L (GPT/ALT) respectively 7207U/l (GOT/AST) and lactate of 7.9 mmol/l indicated necrosis that was later confirmed to be 50% by histology. Our patient received an appropriate organ within one day. Liver transplantation was successfully performed and the patient was discharged from hospital without external cholangiodrainage after a total of 78 days. First follow-up examinations confirmed the patient´s good conditions with the option to consecutively reduce the immunosuppression. 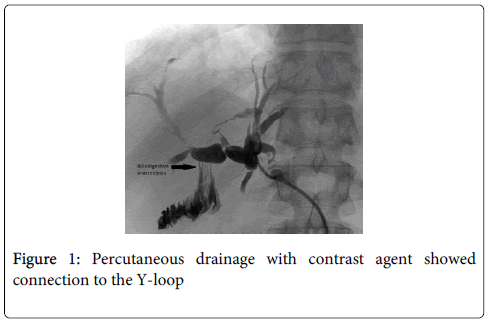 While early complications after BDA like suture insufficiency and bleeding are still to be cured surgically, stenosis as a late complication is treated interventional in first line [2]. Conventional ERC which is carried out as push-enteroscopy cannot reach surgically altered anatomy at the liver hilum. Raithel et al. found access to the anastomosis only in 20.8% using this technique [5]. As next approach the newly established technique of balloon-assisted enteroscopy promises a far greater chance of success [6]. 89.4% of all anastomoses could be reached applying this technique [5]. Finally the described procedures can be combined with percutaneous cholangiodrainage in rendezvous-technique. However all these attempts failed to improve the internal cholangiodrainage in the presented case with worsening symptoms so that surgery had to be performed. This is an option in patients with benign diagnosis and should be done by experienced surgeons in hepatobiliary surgery centers. Unfortunately during the operation the bile duct could not be found either. The main problem, besides cicatrization of the bile duct, was distinct adhesions due to the chronic cholangitis as well as following previous pericystectomy. Adhesions have to be dissected to enable an improved view at the liver hilum. This is known to increase operation time and is associated with intraoperative complications like injuries to abdominal organs or-in this case-the portal vein [7]. Due to stricture best described as grade A2 according to Mönkemüller et al. [8] with total obstruction of the bile duct, renewal of the BDA was not possible. The patient thus was not cured until he eventually received liver transplantation. Transplantation in this case was triggered by liver failure but would anyway have been the only way to enable permanent cure of the severe underlying disorder of our patient.

Stenosis of a BDA is a rare but severe complication in the mid- and long-term survival after hepatobiliary surgery. In few cases where interventional therapy is unsuccessful re-operation is the only way to cure patients [9]. This has more frequent been described in patients after liver` transplantation suffering from strictures in hepaticojejunostomy [4,10] but is also performed in other settings[11]. Otherwise secondary biliary cirrhosis remains a constant threat. Therefore-in exceptional cases-liver transplantation represents a feasible option for the treatment of patients in which sufficient bile drainage cannot be established despite extended surgical efforts or following complications during surgical revision of hepaticojejunostomy.