In the more than 70 years since World War II, the increasing number of Japanese women with breast cancer seems to reflect the substantial transformation that has taken place in the lifestyle habits of the Japanese people. The numbers of cases of cancer of the breast first overtook those of gastric cancer and by 1996 exceeded those of all other organ cancers. An estimated one in 12 Japanese women will develop cancer of the breast during their lifetimes. For those who do, the presence or absence and number of axillary lymph node metastases have been widely recognized as independent prognostic factors [1-6], and recommended treatment for patients with 4 or more involved lymph nodes combines regional nodal irradiation with postoperative adjuvant chemotherapy [7]. We assess the clinicopathological features of patients with 10 or more lymph node metastases, which generally bear a very poor prognosis, and review the literature.

From women with breast cancer who underwent surgeryin the Department of Surgery of the Jikei University Kashiwa Hospital between April 1, 2003 and March 31, 2015, we identified 29 cases (approximately 2.5%) with more than 10 histopathologically confirmed axillary lymph node metastases and retrospectively examined the patient background, clinicopathological features, and prognoses associated with these cases. Tumors were classified histopathologically using the criteria of the International Union against Cancer (UICC)-World Health Organization (WHO), and the expression of steroid hormone receptors was determined on the basis of the J-score [8] with the use of immunohistological staining. The overexpression of human epidermal growth factor receptor 2 (HER2) protein was determined using immunohistological staining and the HercepTestTM (Dako Agilent Pathology Solutions, Denmark), and if the score was 2, findings were confirmed using dual-color fluorescence in situ hybridization. We used the Kaplan-Meier method to calculate cumulative survival rates, a generalized Wilcoxon test to determine differences, and t-tests and chi-square tests to analyze statistics, with P ≤0.05 deemed significant.

Table 1summarizes patient characteristics. Three of the 29 declined postoperative chemotherapy because of their advanced age, and trastuzumab was added to the treatment regimen of each patient when indicated. Patients with positive hormone receptors received endocrine therapy and regional nodal and chest wall irradiation. 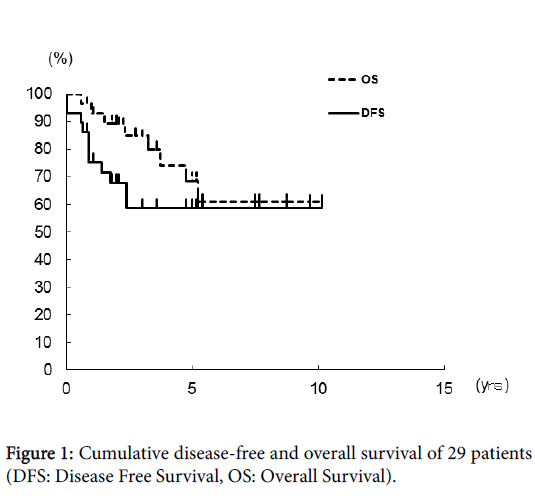 Sixteen patients had invasive ductal carcinoma, six had invasive lobular carcinoma, and seven had invasive micropapillary carcinomas. We excluded one patient from study who died from an accident after a year with no sign of recurrence and divided the remaining 28 patients into 2 groups, 17 who survived without recurrence and 11 who developed recurrent disease. Table 2 summarizes the 2 groups.

Table 2: Characteristics of patients and their tumors in the recurrence-free group and recurrence group. 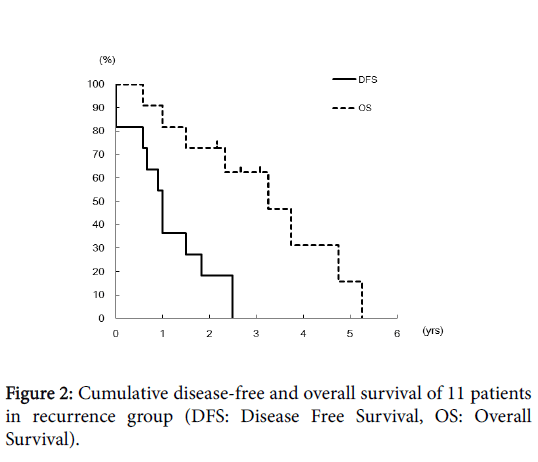 Many studies [1-6] have confirmed the early findings of the National Surgical Adjuvant Breast Project (NSABP) trial [10] that first correlated disease-free and overall survival with the number of axillary lymph node metastases. In general, when the number of positive lymph nodes exceeds 10, 5-year disease-free survival is 20 to 30%, and the prognosis is very poor [4]. Nevertheless, some of these patients live long term without recurrence, and that observation led us to conduct this study.

Seven of our 29 patients (24%) had invasive micropapillary carcinoma, which would generally lead to extended lymph node metastases and follow an aggressive clinical course. This was a higher frequency than that reported by others (about 2%) [11-13].

In recent years, gene analyses using microarray techniques have permitted further classification of breast cancer into such subtypes as luminal A, luminal B, HER2-enriched, basal-like, and claudin-low [14]. From this perspective, the luminal A type was more common in our group without recurrence, the HER2-enriched subtype was more common in the group whose disease recurred, and all 5 patients with TN breast cancer were in the recurrence group. The triple-negative subtype constitutes only 10 to 15% of breast cancers [15] but made up 45% of the cancers in our group with recurrent disease, an exceptionally high number.

We broadly divided patients with breast cancer with more than 10 axillary lymph node metastases into 2 groups according to the biological properties of their tumors and observed that patients whose disease recurred within 3 years of surgery were those who died within the next few years. However, without disease recurrence within 3 years of treatment, long-term recurrence-free survival can be expected. Taking the intrinsic subtypes of their cancers into account, 100% of those whose disease recurred had TN type, and 100% of patients without recurrent disease had tumors of luminal A type. The high percentages of each of these subtypes specific to each group suggest their use as prognostic factors.

Prognosis was very poor in patients who underwent surgery for breast cancer with involvement of more than 10 axillary lymph nodes when cancer recurred within 3 years of treatment, but patients who remained cancer-free at 3 years after treatment could expect a long-term prognosis. Furthermore, preponderance of tumors of TN subtypes in the group who developed recurrent disease and of luminal A subtype in those who remained free of disease suggest the use of these subtypes as prognostic factors.

Copyright: © 2016 Kinoshita S, et al. This is an open-access article distributed under the terms of the Creative Commons Attribution License, which permits unrestricted use, distribution, and reproduction in any medium, provided the original author and source are credited