Copyright: © 2015 Maekawa H, et al. This is an open-access article distributed under the terms of the Creative Commons Attribution License, which permits unrestricted use, distribution, and reproduction in any medium, provided the original author and source are credited.

Objective: Increased fatty acid synthase (FAS) expression is detected in various cancers. It has been demonstrated that the intensity of FAS expression in cancer correlates with clinical outcome. Here, we investigated whether FAS expression in carcinoma of the ampulla of Vater has any relationship to clinical or pathological features.

Methods: We studied 32 patients surgically treated for carcinoma of the ampulla of Vater in our hospital. We compared FAS immunohistochemical staining with other pathological features, including Ki-67, p53, and MUC1, and 2 staining, and with clinical findings.

Results: Of these 32 cases, 16 were considered FAS-positive under our criteria. Pathologically, FAS positivity was correlated to Ki-67 positivity (p: 0.0045), but there was no significant relationship between FAS expression and p53 staining(p: 0.6715). FAS-positive cases showed a higher rate of lymph node metastases (p: 0.0373). However, FAS expression was not related to tumor size, differentiation of adenocarcinoma, duodenal invasion, pancreatic invasion and MUC1 or MUC2 positivity. Clinically, the disease survival rate and the overall survival rate of FAS-positive cases was lower than that of FAS-negative ones (p: 0.0365, 0.0007).

Fatty acid synthase (FAS) expression is normally regulated and inhibited by several hormones in normal tissues [1] and FAS is usually expressed in hormone-sensitive and high-lipid-metabolism cells in humans [2]. Overexpression of FAS was initially reported in breast cancer [3]. Subsequently, increased FAS expression was also reported in various other cancers [4-7]. FAS expression increases the de novo biosynthesis of fatty acids, which contributes to tumor cellular activities [8]; as well as metabolism for energy production, building cellular membranes, and intracellular secondary messengers [9,10]. It has been demonstrated that the intensity of FAS expression in cancer correlates with clinical outcome [4,11-16]. That is, cases with high FAS expression often show poor prognoses in various kinds of cancer [4,11-16].

We studied 32 patients who underwent resection for carcinoma of the ampulla of Vater between January 2002 and January 2014 in our hospital. Pathological diagnoses were performed by hematoxylin and eosin staining. We investigated the expression of FAS, Ki-67, p53, and MUC1, and MUC2 on tissue sections cut from carcinoma specimens formalin-fixed and paraffin-embedded by immunohistochemical staining. Pathological aspects, tumor size, node metastases, tumor differentiation, duodenal invasion, pancreatic invasion, Ki-67, p53 staining, and MUC1, and MUC2 expression were also compared with FAS expression. We compared FAS expression with clinical information. Clinical data such as gender, age, preoperative serum CA19-9 level, diabetes mellitus complication and prognoses were obtained from the clinical records. The study protocol conformed to the ethical guidelines of the World Medical Association Declaration of Helsinki, and has been approved by the ethical committee of our hospital. 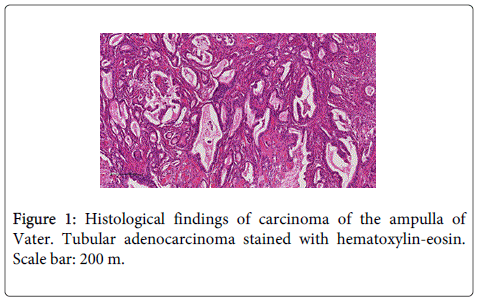 Figure 3: Immunohistochemical FAS staining of 2+ sample–positively stained cells were more than 1/3 and less than 2/3 of cancer cells. Scale bar: 100 m. Figure 4: Immunohistochemical FAS staining of 1+ sample–stained cells were in less than 1/3 of cancer cells. We estimated survival based on FAS expression patterns using the Kaplan-Meier analysis and compared survival between groups using log-rank tests. A p value less than 0.05 was considered significant.

The clinical features of the 32 cases were listed (Table 1). All 32 cases had adenocarcinoma and recurrences were noted in 10 patients, and they died due to carcinoma of the ampulla of Vater. A total of 16 cases were positive for FAS staining and 16 were negative.

Table 1: Clinical Features of 32 Carcinoma of the Ampulla of Vater Cases. 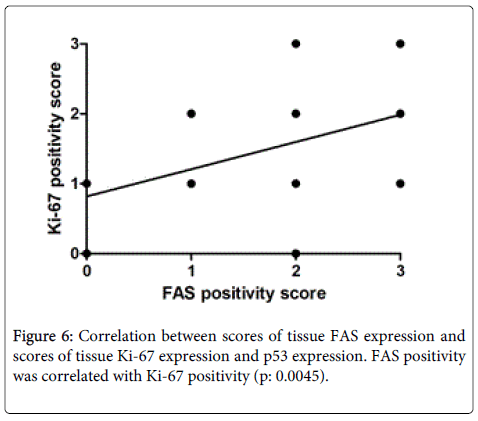 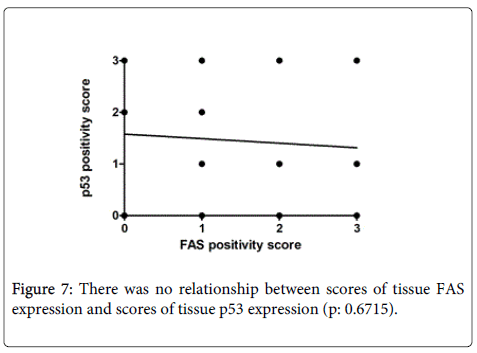 Pathological features of carcinoma of the ampulla of Vater according to FAS positivity were listed on Table 2. FAS-positive cases showed higher rates of lymph node metastases (p: 0.0373). However, FAS expression was not related to tumor size, differentiation of adenocarcinoma, duodenal invasion, pancreatic invasion.

Table 2: Pathological features of carcinoma of the ampulla of Vater according to FAS immunohistochemical staining.

6 cases (40%) were FAS-positive in MUC2-positive cases. There was no significant difference between FAS positivity and MUC1 or MUC2 positivity.

The clinical features of the two groups were also analyzed. There were no significant differences between the two groups in terms of gender, age, and preoperative level of CA19-9, diabetes mellitus complication. Recurrences were seen in both FAS-positive and FAS-negative groups. 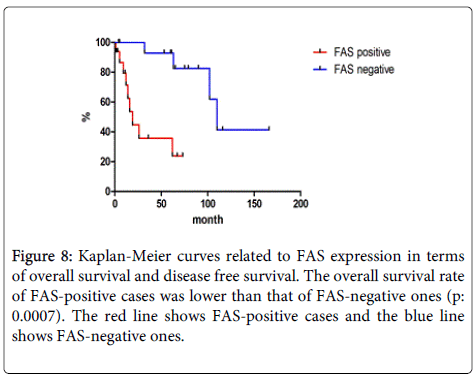 Furthermore, immunohistochemical researches to detect the prognostic factors of this type of cancer have been studied and reported. MIB-1 labeling index and p53 were investigated, same as in this study. Shyr et al. reported that MIB-1 index had prognostic value in resectable carcinoma of the ampulla of Vater, although they did not show the relationship between MIB-1 index and clinical stage and lymph node metastases [30]. The prognostic value of p53 expression has also been reported in several manuscripts. However, it was not clear whether p53 had a possible role in predicting survival [31-35].

Immunohistochemical analyses on the expression of keratin, apomucin subtypes for detecting prognostic factors of carcinoma of the ampulla of Vater have been performed, and those immunohistochemical features were related to the prognoses of carcinoma of the ampulla of Vater [28,29,36,37]. Kimura et al. demonstrated that analysis using keratin7 and MUC2 was useful for the prediction of prognoses in cases of carcinoma of the ampulla of Vater [36,37]. They concluded that prognoses of keratin7-positive cases showed worse than those of MUC2-positive cases. That meant that pancreatobiliary-type adenocarcinoma was highly aggressive compared with the intestinal-type. They also reported pancreatobiliary-type carcinomas showed more frequent involvement of lymph nodes that was responsible for the shorter survival time. However, Catrer et al. reported that there was no significant difference in node metastases between pancreatobiliary-type and intestinal-type [28]. Relation node metastasis and pancreatobiliary- or intestinal- subtypes classification is considered to be still controversial.

In this study, we found that FAS expression is associated with tumor aggressiveness in carcinoma of the ampulla of Vater and had relation to lymph node metastases and their prognoses. That is, FAS expression in carcinoma of the ampulla of Vater is also useful for predicting prognosis, the same as in MIB-1 labeling index and keratin, apomucin subtypes [28,30,36,37]. Our result showed FAS expression had a significant relation to Ki-67 expression and node metastases. However, we could not find any significant relationship between MUC1 or MUC2 positivity and FAS positivity. Our study contains a small number of samples, so we need to accumulate more cases for further consideration in order to determine the relationship between pancreatobiliary- or intestinal- subtypes classification and FAS expression.

Recently, FAS has been said to play an important role not only in tumor growth, but also in drug resistance [38,39]. Both cellar proliferation and drug resistance can contribute cancer survival. Theses abilities are based of elevated FAS activity [40]. From previous reports and our results, it is suspected that FAS expression is related to cancer aggressiveness. FAS-positive expression can be considered to be a prognostic marker of cancer.