Copyright: © 2016 Andreoli TB, et al. This is an open-access article distributed under the terms of the Creative Commons Attribution License, which permits unrestricted use, distribution, and reproduction in any medium, provided the original author and source are credited.

Reef fishes are of great importance for artisanal fisheries in the coast of Brazil. For example, snappers and groupers are very important targets of small-scale fisheries; among the groupers, two are of notable importance: the dusky grouper (Epinephelus marginatus) and the comb grouper (Mycteroperca acutirostris). The urgency of their management has been stressed in some studies. Compared to E. marginatus and to other groupers, there is a rather scarce literature and information on comb grouper. There is some information for M. bonaci. Comb grouper is an important target fish for artisanal fisheries in Brazil. Even though there are studies of comb groupers in Brazil, there is lack of information on the reproduction of comb groupers.

Reef fishes are of great importance for artisanal fisheries in the coast of Brazil. In particular, snappers and groupers are fishery targets. The dusky grouper (Epinephelus marginatus ) and the comb grouper (Mycteroperca acutirostris ) are high value catches from small-scale fisheries. The urgency of grouper management has been stressed in some studies [1,2]. There is a rather scarce literature on comb grouper, compared to other groupers [3]; some information is available for M. bonaci [4]. Comb grouper is an important target fish for artisanal fisheries in Brazil [5-7]. In Brazil, there is lack of information on the reproduction of comb groupers, in spite of some available studies about this species [such as Anderson et al. [5-12] (SE and Southern Brazil) and [13] (Franceses Island, central coast of Brazil].

Therefore, in Brazil, we have difficulties in finding the reproductive or spawning period of groupers, including of comb grouper. A few observations on mature gonads of comb groupers are available from SE Brazil, where catch length (Total Length, TL) varied from 350-45-mm Begossi et al. [5,14]: data shown here in this study); other studies included some morphometric analyses of comb grouper [15]. Information from fishbase [3] shows comb grouper occurrence in the Western Atlantic, but with limited information on its biology and reproduction. UICN Red list (2015.2) identifies it as “least concern”, but considers that fishing could be a possible threat to this species. Because of these difficulties, we show here that integrating and collaborating with fishers could help in accessing data on comb groupers. Naturally, a collaborative working process should be performed through fishers’ payments, since they spend extra time for the research.

Many authors have suggested collaborative methods with fishers [16-19]. These methods can be associated with training and focusing on reproduction and diet of target fish [17]. Petrere [19] was one of the pioneers in training fishers, for catch landings from riverine fisheries of the Brazilian Amazon. Recently, FAO have suggested the use of fishers knowledge and collaborative processes towards the management of small-scale fisheries (FAO, technical paper 591 [20]).

Summing up, two were the main objectives of this study: to gather information on comb grouper reproductive period and to improve our collaborative methods with the small-scale fishers of Copacabana. We also compared the results of this study (2013-2014/Andreoli [21]) to results from earlier studies (2006-2007). We decided for a short communication of these results, since in spite of the invested time and effort on the research, we still got a few information on the gonad development of comb grouper. However, as we show here, the methods can be promising for future studies.

The ‘Colonia de Pescadores’ do Posto 6 is located at Copacabana beach, Rio de Janeiro, Brazil. It is a small-scale fishing community, operating since 1923 and located in the side of the Copacabana Fort, which dates from 1914 [22]. These authors also show catches from Copacabana collected in 1994-1995, in which groupers were important target fish, being locally called as ‘noble fish’. In 2006-2007, another study was conducted by AB on some target species, to obtain data on diet and reproduction of bluefish, Pomatomus saltatrix; groupers, Epinephelus and Mycteroperca, and snooks, Centropomus spp. [5,14] (Figure 1). 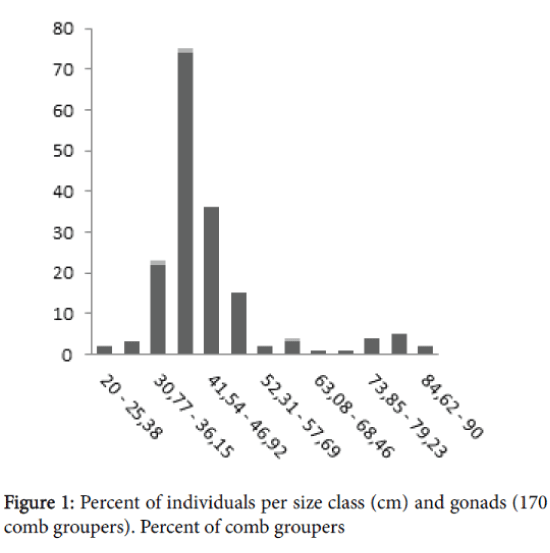 Mycteroperca acutirostris (comb grouper) is often shown at local catches of Copacabana [9]. Fishing at Copacabana beach is performed with small-scale motor canoes or boats, using nets, hook and lines and diving. Currently diving has been important, especially among young fishers.

The procedures used here are based in Begossi ([17] where C. undecimalis is the example), and used in other studies also, such as Silvano and Begossi [23] (with P. saltatrix ).

In this study, performed in 2013-2014, fieldwork was conducted at Copacabana by one of the authors (AB). Two fishermen (and fish cleaners) were chosen as collaborators. The comb groupers available at the landing points were opened and gonads were observed (mature or not, with or not visible eggs). Total fish length (cm) and weight (Kg) was also measured. A training protocol was developed with the fishers. Every month (one or twice a month) AB was collecting these data from them along with other relevant information. Hours spent by fishers for the research project were paid through a research grant. Fieldwork was conducted from September 25, 2013 to August 20, 2014.

In 2013-2014, information on 178 comb groupers was obtained, including information of the reproduction for 176 groupers.

The previous study (2006-2007), included 33 comb groupers. After training the fishers, and with their help, we almost double the days of observations, thus increasing the sampling effort (from 36 to 68 days). Naturally, fishers observe catches almost daily, whereas researchers have a limited amount of time to fieldwork. Similar comparisons were made for the dusky grouper, Epinephelus marginatus [24] (Table 1).

The comb grouper length from catches was relatively smaller in the previous study (39,6 cm) compared to this study (43 cm). Mean weight followed a similar pattern (0,80 kg and 1,35, respectively). Mature gonads were rare: we found two (January) in the previous study, and three in the current study (April, September and October). Having a considerable lack of information on comb grouper, these findings might help towards a preliminary indication of the reproductive period, which could be important towards a local management [19,25,26]. In 2006-2007 a similar study was conducted also at Bertioga by AB, São Paulo coast, from September 2006 to August 2007: 6 comb groupers were collected and three had small mature gonads (one in March and two in April 2007 [17]). In a study of the local ecological knowledge of target species by 7 fishing communities of the coast of Brazil, Silvano et al. [26] had shown that most fishers had no knowledge on the spawning period of comb grouper; the ones with knowledge about it, mentioned September and October as spawning seasons (similar with our results). The opportunity to conduct both questionnaires and direct observations are a good alternative for data less fisheries.

Our results are inconclusive, but indicative of the period of gonad maturation of comb grouper in the coast of Brazil. Spawning might even occur in several periods. However, the importance and urgency of getting data on target reef species (as comb groupers are) has been stated in many studies [1,2,5]. Relevant information from this study is on the length (TL) of the comb grouper caught by small-scale fishers at Copacabana beach: in 2013-2014 (n=176), the average length was of 43 cm (Table 1). That length is above the legal minimum length of the Portaria Ibama #53/05 which sets the minimum capture of comb grouper at 23 cm. Our results show only two specimens below this length (Table 1).

Another complementary suggestion is based on the observation that most adults of M. acutirostris has no mature gonads; therefore, these fish can be either far from the shoreline or even located at deeper ranges. More studies are needed concerning this species, since its length at first maturity (Lm) is not generally known (and not found in the fishbase: Froese and Pauly, 2015) [27,28].

There is urgency on data about target reef fishes, such as on comb groupers. Reef fishes are targets of in many fisheries, especially smallscale fisheries. Data on the reproduction of comb grouper is scarce and very limited. Our study shows difficulties in obtaining data on comb grouper reproduction, but it also shows how collaborative research can be of value in order to increase sampling effort towards the acquisition of biological information. Biological information on reproduction is very important in order to detect periods in which the fishery should suspend the fishing activities (for a species). Therefore, training processes and integrating research within the fisheries can be of extreme value for conserving biodiversity.