Copyright: © 2015 Rao and Roopa. This is an open-access article distributed under the terms of the Creative Commons Attribution License, which permits unrestricted use, distribution, and reproduction in any medium, provided the original author and source are credited.

Results: There is no statistically significant difference between seventh generation bonding agent and Peak universal bond. Conclusion: Use of Peak universal bond (self-etch adhesive with 0.2% CHX incorporated in it) has no adverse effect on immediate resin dentin bond strength and it is comparable with that of seventh generation bonding agent (self-etch adhesive without chlorhexidine), suggesting that antimicrobial may be safely incorporated into the resin monomers contained in the adhesive.

Adhesive resin-dentin interfaces still deteriote over time despite improvement made in the chemistry of contemporary dentin adhesives [1-3]. A correlation between the presence of active endogenous matrix metalloproteinase’s (MMPs) in dentin matrices and premature degradation of hybrid layers has been demonstrated [4,5]. In dentin different forms of MMPs has been identified with MMP-2 and MMP-9 being the most relevant [4,6,7]. When exposed to acidic environment, such as the one created by the application of acidic adhesive resins, these enzymes, initially secreted as pro-enzymes, become active proteinases [8]. These host derived MMPs have been shown to degrade sub-optimally infiltrated collagen fibers once they have been activated through bonding procedures [5,9].

Bonding to dentin currently can be achieved through etch–and–rinse (ER) or a self-etch (SE) approach. pH of etch and rinse adhesives is high (2.5-4.5) to etch through smear layer and underlying dentin, hence separate acid etching step with 32%-37% phosphoric acid is required. Incomplete infiltration of demineralized dentin matrix with resin monomers apically leaves collagen incompletely encapsulated to the bottom of the hybrid layer [10], which is then susceptible to proteolytic degradation by host-derived MMPs. Self–etch adhesives, with a higher pH (2.0-2.7), can still etch through the smear layer. Despite the shallow etching pattern, optimal hybrid-action and high bond strengths have been reported with these formulations [11]. Activation of precursor MMP forms has been demonstrated with ER [8] and SE [8,12] adhesive systems.

Chlorhexidine digluconate (CHX), a cationic antimicrobial agent which is effective against Gram-positive and Gram-negative microbes has been demonstrated successful inhibition of dentin MMP collagenolytic activity when used in concentrations of 0.2% and 2.0% [12-14]. Peak Universal Bond is a novel self-etch adhesive containing chlorhexidine in it.

Twenty freshly extracted non-carious, intact human maxillary third molar teeth were selected for this study. The collected teeth were cleaned of debris stored in saline solution. The specimen teeth were utilized within three months of extraction. These teeth were embedded in cold cure acrylic till cement to enamel junction with the help of plastic moulds (Figure 1). The occlusal surface of each tooth was reduced in order to expose flat surface of dentine with a high speed handpiece using #245 carbide bur under constant water spray (Figure 2). The prepared specimens were randomly divided into two experimental groups with 10 specimens in each group depending upon the bonding agent used: 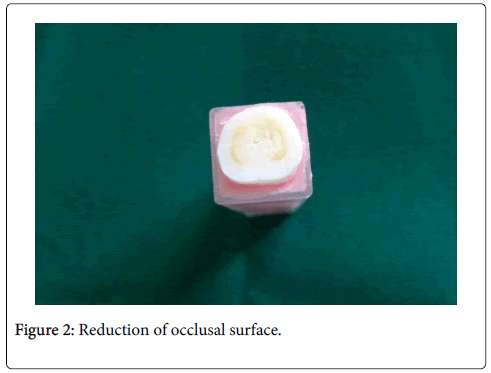 Tooth surface was rinsed and blotted dry. Bonding agents were applied with a microbrush on exposed surface of dentin and light cured for 20 seconds. Then, the composite resin Z 350 (3M ESPE) was placed in a 2 layer increment using plastic mould (2 × 2.5 mm) on exposed dentin surface and was light cured for 40 seconds (Figures 3 and 4). All the specimens were stored in distilled water for 24 hours prior to shear bond testing. Specimens were mounted on the universal testing machine (Unitek, 9450 PC, FIE, INDIA), and force applied by a machine on each specimen was at a crosshead speed of 1 mm/min using a blade parallel to the adhesive-dentin interface. The specimens were positioned horizontally, so that the shearing blade is perpendicular at composite-dentin interface (Figure 5). Each specimen was loaded until failure. Shear force required to debond the specimen was recorded in pounds and converted into megapascals (MPa). The data so obtained were tabulated and analyzed statistically using independent-samples t test. 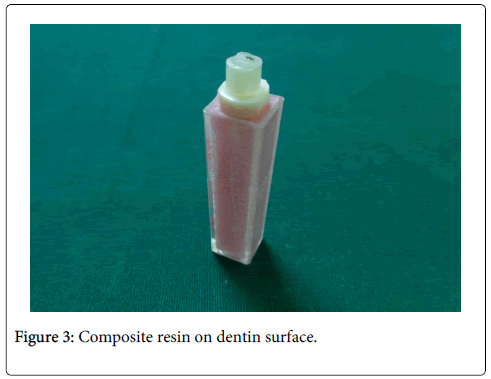 One of the problems affecting adhesive restorations is premature loss of adhesion [15] and has been primarily attributed to hybrid layer degradation at tooth restoration interface [16].

The present study evaluated the bonding efficacy of seventh generation bonding agent (self-etch without chlorhexidine) and Peak Universal bond (self-etch adhesive with 0.2% chlorhexidine incorporated in it). Chlorhexidine incorporated into the adhesive, did not appear to affect bond strength for adhesive approach at 24 hours, suggesting that the antimicrobial may be safely incorporated into the resin monomers contained in the adhesive. Our results confirm those from previous studies, which have shown that CHX, applied topically [14,19-23], or into adhesive system has no effect on the immediate bond strength.

It has been reported that chlorhexidine possesses MMP–inhibitory properties at very low concentrations. Chlorhexidine completely inhibit MMP-2 and MMP-9 gelatinase activity at concentrations as low as 0.03% [19].

Further studies should be conducted to evaluate the role of chlorhexidine incorporated self-etch adhesive in stabilizing the bond for long term period.

Under the limitations of the study it can be concluded that the use of Peak universal bond (self-etch adhesive with 0.2% CHX incorporated in it) has no adverse effect on immediate resin dentin bond strength and it is comparable with that of seventh generation bonding agent (self-etch adhesive without chlorhexidine), suggesting that antimicrobial may be safely incorporated into the resin monomers contained in the adhesive.