Comparative measure of electricity produced from benthic mud of FUTA junction and FUTA north gate in akure, ondo state, using microbial fuel cell was been studied. Microbial Fuel Cell (MFC) is an energy generating source that aim at utilizing the oxidizing potential of bacteria for nutrient in soil. This was achieved by building the anode and cathode containers connected together by a salt bridge and an external circuit was made to transfer the electrons from the anode to the cathode. Four kg of benthic mud sample was collected from a stream at both FUTA junction and FUTA north gate, Akure into the anode container of the microbial fuel cell. Standard microbiological analysis was used to identify and isolate microorganisms present in the benthic mud. The voltage, current, concentration and pH were observed for 14 days (336 h). The control experiment was a sterilized benthic mud from same location which was monitored for 7 days. 5 g of salt was added to the salt water in the anode container every 24 hours which increase the concentration of the salt. The microorganisms isolated were shown at the two locations were Shewanella sp., Streptomyces sp., Pseudomons sp., Geotrichum candidum, Aspergillus sp. and Escherichia coli, Actinomycetes sp., Clostridium sp., Bacillus subtilis, Trichoderma sp. and Candida sp. for FUTA junction and FUTA north gate respectively. The highest microbial population, highest voltage and current which were observed at FUTA junction benthic mud. They were 3.42 × 103 to 1.34 × 103 and 1.70 × 103 to 2.70 × 103, voltage and current of 120.3 v at 240 h (10th day) and 5 amps at 336 h (14th day) for population, voltage and current respectively. The control experiment with no microbial population which resulted in the low voltage and current generated show that microorganism play a major role in the generation of the current. It is concluded that a microbial fuel cell with benthic mud as substrate can generate electricity. Therefore, it is a form of bioenergy that can be exploited to reduce the effect of utilizing non-renewable fuel for energy.

Energy consumption has increased dramatically leading to an unbalanced energy management [1]. Biofuel cells potentially offer solution to all these problems [2]. It has been known for almost one hundred years that bacteria could generate electricity. But only in the past few years has this capability become more than a laboratory novelty. The Microbial Fuel Cell (MFC) is a new form of renewable energy technology that can generate electricity from what would otherwise be considered waste. The reasons for this recent interest in using bacteria to generate electricity are a combination of the need for new sources of energy, discoveries about microbial physiology related to electron transport, and advancement of fuel cell technologies. Microbial fuel cells produce electricity from organic matters. Unlike conventional fuel cells, MFCs have certain advantages like high energy-conversion efficiency and mild reaction conditions [3]. They take readily available substrate from renewable resources and convert them into useful byproducts with the generation of bioelectricity [4]. Alternative sources of energy are in high demand in developed as well as developing countries are facing serious energy crisis. High energy requirement of conventional sewage treatment systems are demanding for the alternative treatment technology, which will be cost effective and require less energy for its efficient operation. In addition, due to global environmental concerns and energy insecurity, there is emergent interest to find out sustainable and clean energy source with minimal or zero use of hydrocarbons. Bio Electrochemical Systems (BESs) have recently emerged as an exciting technology, in a BES, bacteria interact with electrode using electrons, which are either removed or supplied through an electrical circuit. The most described type of BES is Microbial Fuel Cells (MFCs). Bacteria can be used in fuel cell to catalyze the conversion of organic matter, present in the wastewater into electricity [5]. In an MFC, bacteria are separated from a terminal electron acceptor at the cathode so that the only means for respiration is to transfer electrons to the anode. An MFC is thus a bioelectrochemical system that derives electricity by mimicking bacterial interactions found in nature. Microorganisms catabolize compounds such as glucose [6], acetate or wastewater [7]. It is a device that converts chemical energy to electrical energy by the catalytic reaction of microorganisms [8,9]. Microbes are ubiquitous throughout virtually all soils, sediments, and streams on the planet. This makes MFCs very attractive for this sensor application that only requires low power but where replacing batteries may be time consuming and expensive. Substrate is a key factor for efficient production of electricity from a MFC. Substrate spectrum used for electricity generation ranges from simple to complex mixture of organic matter present in wastewater. Although substrate rich in complex organic content helps in growth of diverse active microbes but simple substrates considered to be good for immediate productive output. Acetate and glucose are most preferred substrate [10]. This experiment firstly is to isolate and determine the microorganisms responsible for the production of the electrons and proton in the benthic mud at the two locations. Secondly is to examine how feasible it is to generate electricity from a microbial fuel cell and to compare the current generate at the two locations.

Building of the anode and cathode containers: The anode and cathode containers were built by drilling holes on both sides of the containers making sure that the holes were exactly opposite each other. After which a short PVC pipe was inserted into the holes of the two containers and PVC gum mixed with cement was then used to hold the pipe and the container together to avoid leakage. After drying, the end cap and the long PVC pipe were screwed in tightly and firmly and were screwed in also in the second pair of container. Holes which were two millimeters (mm) in diameter were drilled on top of the two plastic containers lids. This set-up was filled with water past the holes/ joints and allowed to stay overnight to check for the leakages and water tightness [11].

Making the bridge: Thirty grams of nutrient agar was weighed and added into a pot of boiling water, stirred until it was dissolved. Once dissolved, six grams of salt was weighed and mixed with the agar until it was dissolved. While the solution was still warm, it was poured into the compression tube covered at one end with aluminum foil. Once the tube was filled and stable for 10 min, the Petri dish was carefully moved to the refrigerator.

Sample collection: The rich mud was gotten from a lower stream with a rich riverbed which is very close to a farm land at FUTA North Gate, Akure. Also benthic mud was collected from a dirty stream flowing along FUTA junction, Akure. A clean shovel was used to remove the mud at the upper layer of the stream before the benthic mud which was 3 mm dip in the stream was collected. The stream water was also collected. The benthic mud sample was transported to the labouratory and used within 1 h of collection.

Making and testing of the control MFC: Mud sample (4 kg) was gotten from the same source and brought to the laboratory; the mud sample was weighed and sterilized at 180°C for two hours using the dry-air oven. The mud was aseptically transferred into the anode container and tightly covered to prevent the penetration of oxygen, 1.5 liters of sterile water was used to dissolve the mud. The cathode was made of distilled water. The same mode of MFC construction as above was used to construct the control MFC (Figure 1). 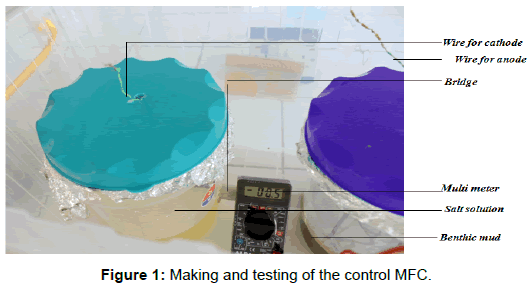 Figure 1: Making and testing of the control MFC.

The microbial population for the period of 14 days was observed and recorded for the benthic mud of the two locations FUTA junction and FUTA north gate in Tables 1 and 2 respectively. Their microbial populations ranged from 3.42 × 103 to 1.34 × 103 and 1.70 × 103 to 2.70 × 103; 4.35 × 103 to 1.34 × 103 and 3.15 × 102 to 4.50 × 102 of bacteria and fungi respectively for FUTA junction and FUTA north gate. Mud from FUTA junction has the highest bacteria and fungi population at the 8 day (192 h) of isolation. The sterilized mud which was the control has no growth for both muds. The microorganisms isolated were shown in Table 3 which were Shewanella sp., Streptomyces sp., Pseudomons sp., Geotrichum candidum, Aspergillus sp. and Escherichia coli, Actinomycetes sp., Clostridium sp., Bacillus subtilis, Trichoderma sp. and Candida sp. for FUTA junction and FUTA north gate respectively.

Table 1: Microbial population of the benthic mud and sterilized (control) sample from FUTA junction for a period of fourteen days.

Table 2: Microbial population of the benthic mud and sterilized sample (control) from FUTA north gate for a period of fourteen days.

Table 4: Voltage, current, pH, concentration and temperature of the control MFC for 168 h (7 days) for benthic mud from FUTA junction. 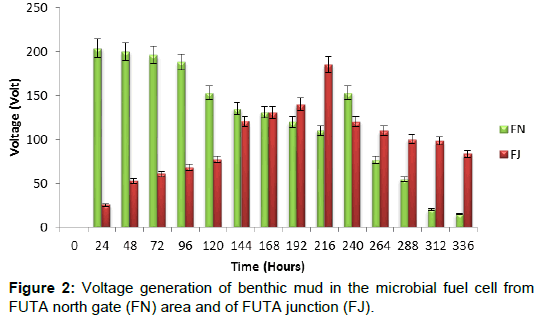 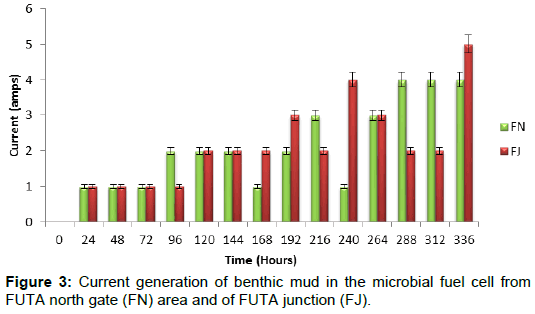 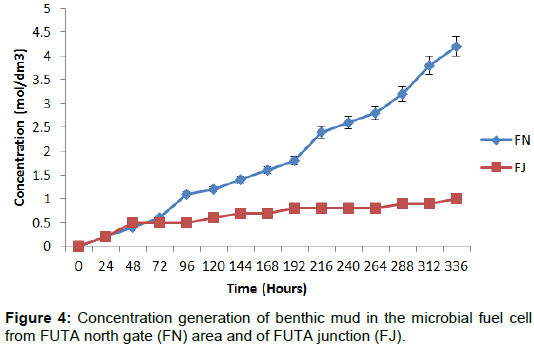 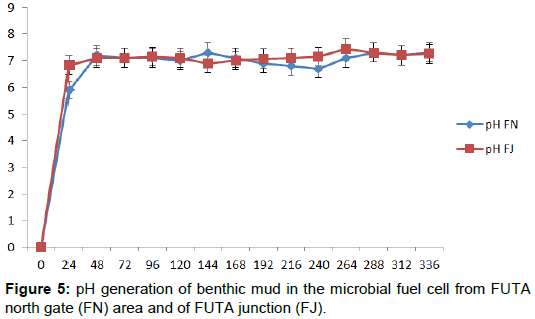 Microbial Fuel Cell (MFC) are fuel cells that are capable of converting chemical energy available in organic substrates into electrical energy using bacteria as a biocatalyst to oxidize the biodegradable substrates [12]. The microbial populations in the benthic mud of the two location increases as the experiment progress and decreases at the latter days. This implies, the microorganisms uses the organic substrate at the early period of the experiment and the population decreases as the nutrient in the mud depletes . The microorganism isolated from the mud FUTA junction mud has a higher microbial population than the FUTA north gate which might be as a result of it richer in organic nutrient (Tables 1 and 2). Voltage and current generated from the benthic mud of FUTA junction were higher than those generated by the FUTA north gate mud which probably have resulted from higher microbial activity of the muds since the microorganisms in the mud convert the organic nutrient present in the mud to proton and electrons which give the voltage and current readings (Figures 2 and 3). The pH of both benthic mud was neutral all through the experiment and their temperature was constant at 27°C which are good optimum conditions for bacteria to act (Figure 5). The control experiment generated a very low voltage and current might is due to the fact that it has no microbial activity (Table 4). The microorganisms isolated are found bountifully in the soil.

This research demonstrated the ability of these microbes to oxidized organic and inorganic matter in the mud to produced electric current. Therefore the MFC is a form of bioenergy that can be exploited to reduce the effect of utilizing non-renewable fuel for energy.

Copyright: © 2018 Adegunloye DV, et al. This is an open-access article distributed under the terms of the Creative Commons Attribution License, which permits unrestricted use, distribution, and reproduction in any medium, provided the original author and source are credited.