Congenital esophageal stenosis (CES) is a rare cause of esophageal dysphagia. It is secondary to failure of complete separation of respiratory tract from primitive gut in early fetal life. Diagnosis may be delayed requiring high index of clinical suspicion and esophagogram studies. Final diagnosis of the subtype may require histopathological examination. Treatment may range from endoscopic dilatation in mild cases to esophageal resection in severe cases. In this article, we describe a rare case of congenital esophageal stenosis presenting in late childhood as dysphagia with characteristic barium esophagogram study. Very few cases have been reported in the medical literature in the past.

Congenital esophageal stenosis is a developmental anomaly occurring in approximately one out of 25,000-50,000 live births [1]. Fetal anoxia causing defective canalization of esophagus is a postulated mechanism [2]. Clinical presentation may range from dysphagia or recurrent vomiting/aspiration pneumonitis in early childhood to severe dysphagia, chest pain during deglutition or recurrent food impaction in early adulthood. Early diagnosis is the key to early management obviating the need for major esophageal surgery especially resection.

An eleven-year old boy presented in our hospital outpatient department with a complaint of significant progressive dysphagia since last 2 years associated with regurgitation of food particles recently without history of significant weight loss or chest pain.

No history of dysphagia in early childhood or choking/respiratory symptoms could be elicited. There was no history of corrosive ingestion in the past. No history of any obvious abnormality is noted in antenatal fetal ultrasonographic examination. Laboratory tests were unremarkable. Chest radiograph revealed right mediastinal soft tissue mass with smooth lateral margin (Figure 1). 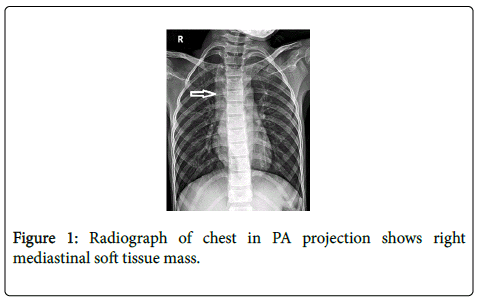 Barium swallow examination was then advised to look for the cause of dysphagia. Examination was performed under image intensifier and it revealed dilatation of proximal two-third esophagus (corresponding to right mediastinal soft tissue mass in chest radiograph) with shortsegment, circumferential narrowing in distal-third esophagus showing smooth margins without obvious signs of proximal shouldering or reflux esophagitis or hiatus hernia (Figure 2). 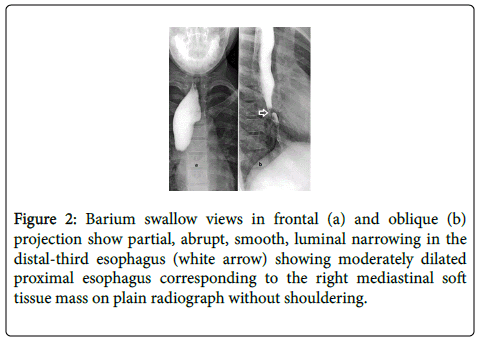 Evidence of irregular filling defect was noted at the site of stricture associated with eccentric jet-effect (Figure 3) and fairly-preserved longitudinal mucosal folds in the normal-appearing distal esophagus and morphologically normal gastro-esophageal junction (Figure 4). 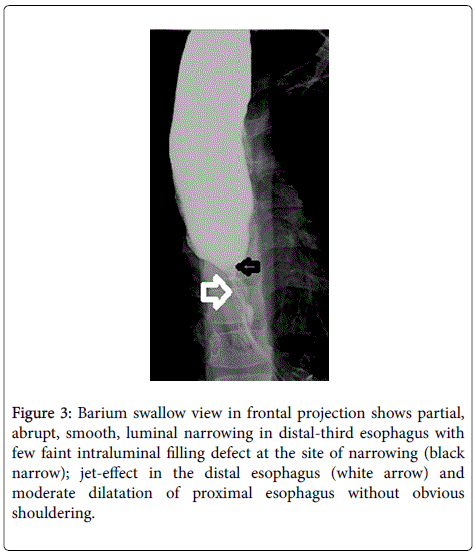 Esophageal emptying was delayed with proximal hold-up of contrast in esophageal lumen for up to 60 minutes associated with slight oral regurgitation of barium.

Based on the above findings a radiological diagnosis of partial, congenital esophageal stenoses probably secondary to esophageal web was suggested. Esophageal endoscopy confirmed the diagnosis of esophageal web which was treated with endoscopic dilatation and resection of web. The irregular filling defect noted at the site of stenosis on barium esophagogram was due to food particles admixed with desquamated mucosa. No evidence of any obvious signs of malignancy was noted.

Congenital esophageal stenosis may exist in one of the following three forms [2]:

• Fibromuscular stenosis caused by fibrotic changes in submucosa and muscularis propria, and

Though symptoms secondary to CES may start around the weaning period during infancy with dysphagia to solids yet in many cases minor degrees of stenosis is often overlooked, seeking medical attention only in young adulthood due to major food impaction or regurgitation [4]. Despite a long history of dysphagia, a high-clinical suspicion with characteristic esophagogram serves as clues for early diagnosis. Final diagnosis may require tissue examination in most cases as CES secondary to tracheobronchial remnants is the commonest etiology [5]. About one-third cases of CES may be associated with esophageal atresia [6,7].

Esophagogram in CES characteristically reveals short-segment, circumferential luminal narrowing in upper, middle or lower-third part of esophagus with smooth and tapering margins associated with proximal dilatation without obvious signs of shouldering [4,5]. However, normal esophagogram may be noted in initial cases while signs of reflux esophagitis may be noted in cases of lower-third involvement.

In addition to CES, differential diagnosis of esophageal stricture includes the following:

• Achalasia which is rare in infants and children involving the esophagogastric junction showing a long, tapered, narrow segment resembling a “bird’s beak” with disorganized peristalsis,

Congenital esophageal stenosis is a rare cause of childhood dysphagia occurring in various forms. Barium esophagogram plays a central role in diagnosis. Early diagnosis is very crucial for early management that may avoid surgical esophageal resection, reducing morbidity and mortality significantly in CES patients. Thus, CES should be strongly suspected as a cause of dysphagia in childhood and young adults.