Copyright: © 2014 Singh RK, et al. This is an open-access article distributed under the terms of the Creative Commons Attribution License, which permits unrestricted use, distribution, and reproduction in any medium, provided the original author and source are credited.

Phosphate industries use sulphuric acid during the manufacturing of fertilizers. This acid interacts with stainless steel to develop corrosion cell and it corrodes metal. Organic inhibitors 2-(aminomethyl) phenol and 2-(aminomethyl) benzenethiol were taken for corrosion control in 15% H2SO4 medium. Inhibitors anticorrosive effect studied at different temperatures and 10 mM concentration. The corrosion rate of metal absence and presence of inhibitors were determined gravimetric methods. The corrosion current density and inhibitors polarization effect was studied by potentiostat. Inhibitors’ corrosion protection activities like physisorption-chemisorption adsorption, thermal stability and surface films formation analysis can be done by activation energy, heat of adsorption, free energy, enthalpy and entropy. The experimental results of inhibitors surface coverage area and inhibition efficiency were exhibited strong bonding between inhibitors and base metal.

Stainless steel is a very important metal for phosphate industry whereas H2SO4 produces hostile environment for surrounding material and it produces several forms of corrosion like galvanic, pitting, crevice, stress, intergranular embrittlment and blistering. Scientists and researchers were used different techniques for corrosion mitigation of materials like organic and inorganic coatings, use organic and inorganic inhibitors, composite materials coating, nanocoating and plasma coatings. Inorganic nanocoating of aluminum phosphate [1], zinc phosphate [2] and magnesium phosphate [3] in presence of DLC (diamond like carbon) filler were used as nanocoating materials in high temperature and acidic environment. Aliphatic and aromatic compounds [3-5] containing amino, hydroxyl and thiol functional groups were applied as corrosion protector in acidic medium. Polymeric coating [6-8] saved material for corrosion but this coating did not produce good results in long duration. Mixed types of organic inhibitors having cathodic [9-11] and anodic [12-15] polarization power used as an inhibitor in acidic condition. Plasma coating [16,17] provided corrosion resistance of metal at high temperature and strong acidic medium. Natural products [18,19] used as inhibitor which is ecofriendly with environment and these products has good inhibition properties.

Stainless steel (5×3×0.01) square meter size of coupons made for experimental work. Its surface was sharpened with emery paper and samples were washed with double distilled water. Finally it was rinsed with acetone and dried with air dryer and kept into desiccator. Inhibition effect of 2-(aminomethyl)phenol and 2-(aminomethyl) benzenethiol were studied at 50°C, 60°C and 70°C temperatures and 10mM concentration. The corrosion rate was calculated absence and presence of inhibitors by gravimetric method. Stainless steel (316) was used for this and its chemical composition analyzed in Bokaro Steel Plant Jharkhand, India.

Table 1: The Corrosion of stainless steel in 15% H2SO4 at different temperatures and 10 mM concentration of inhibitors.

Figure 1: log K versus 1/T at different temperatures with 10 mM of inhibitors.

The percentage inhibition efficiency and surface coverage area of inhibitors were determined using 2 and equation3. 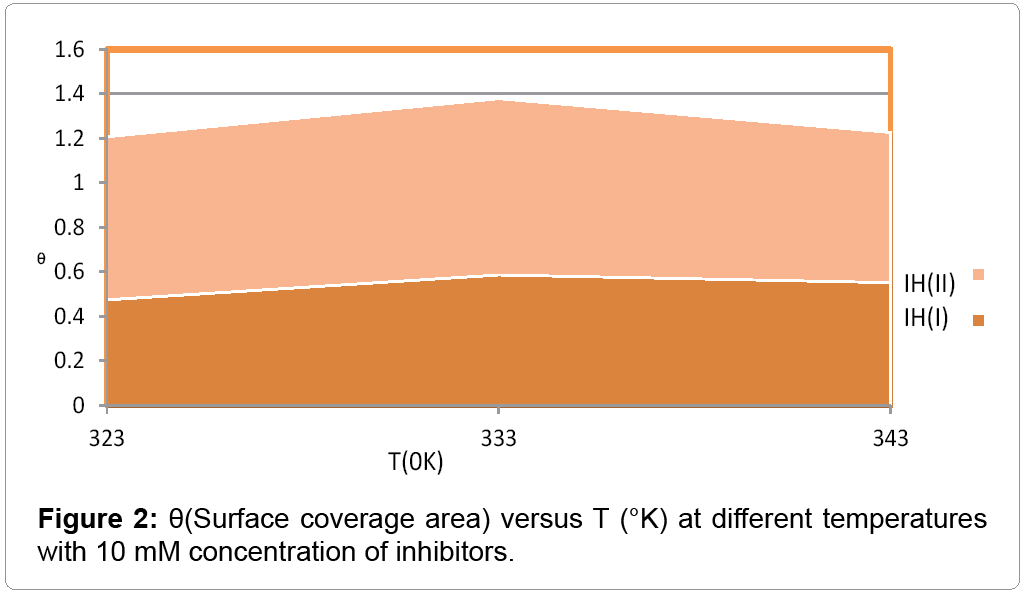 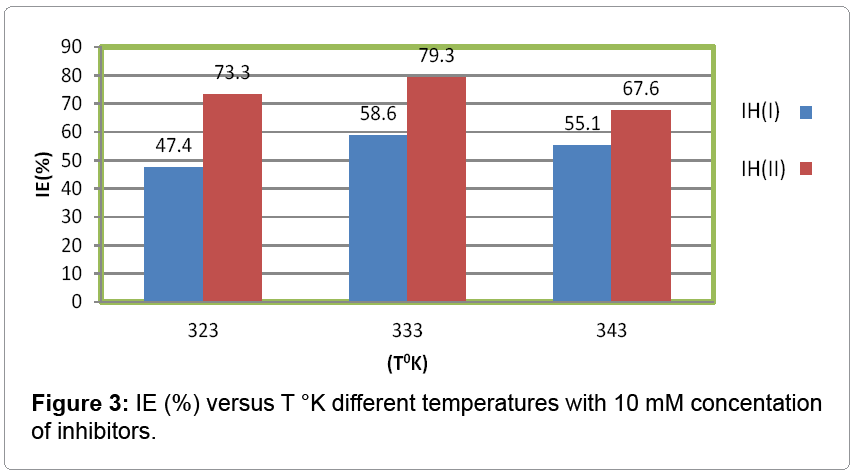 These results were shown that inhibitors adhered with surface of base metal.

where T is temperature in Kelvin and Ea is the activation energy of the reaction.

The heat of adsorption was calculated with help equation 5 and their values were mentioned in Table 2. The graph plotted between log (θ/1- θ) vs. 1/T was shown straight line in Figure 4 and its negative values indicated that inhibitors bind with metal by physical forces. 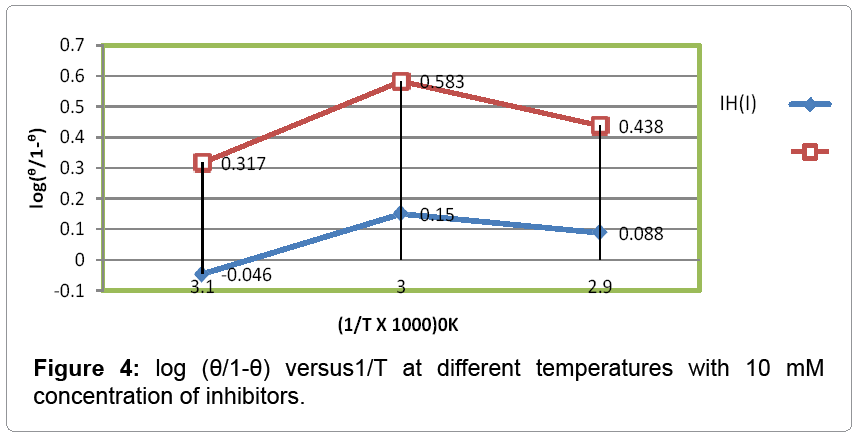 where T is temperature in Kelvin and Qads heat of adsorption

Free energy was determined by equation 6 and its values were recorded in Table 3. Its values mentioned in Table 2 depicted that after addition of inhibitor exothermic reaction occurred.

The energy of enthalpy and entropy were calculated by transition state equation 7 and it values were recorded in Table 2. These values noticed that inhibitors were produced an exothermic reaction and they bonded with metal chemical adsorption. Thermodynamical values of Ea, Qads. , ΔG, ΔH and ΔS versus surface coverage area (θ) plotted in Figure 5 indicated that inhibitors adsorbed with metal by physisorptionchemisorption. 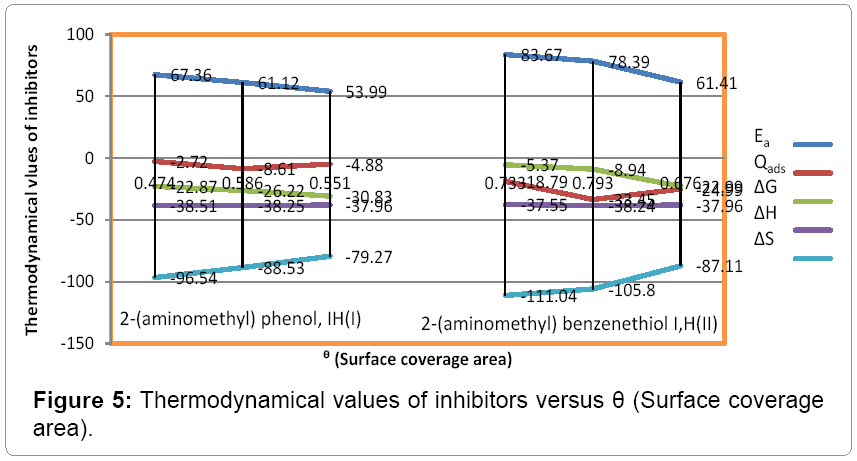 The corrosion current density is determined in the absence and presence of inhibitors the help of equation 8 and their values are recorded in Table 3.

where ΔE/ΔI is the slope which linear polarization resistance (Rp), βa and βc are anodic and cathodic Tafel slope respectively and Icorr is the corrosion current density in mA/cm2.

The metal penetration rate (mmpy) was calculated by equation 9 in absence and presence of inhibitors.

where Icorr is the corrosion current density ρ is specimen density and Eq.Wt is specimen equivalent weight. 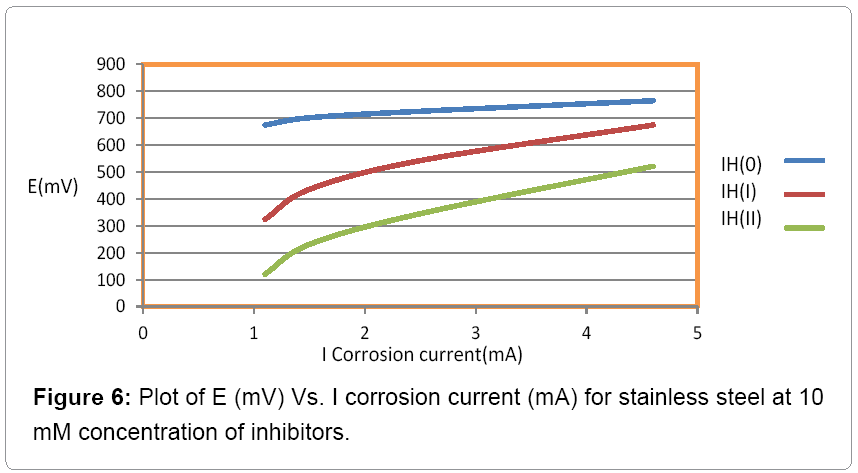 Figure 6: Plot of E (mV) Vs. I corrosion current (mA) for stainless steel at 10 mM concentration of inhibitors.