Conclusion: Considerable proportion of pregnant women in Mwanza is co-infected with rubella, Cytomegalovirus and parvovirus B19. We recommend routine screening for these infections during antenatal visits so as to reduce the possibility of congenital infection.

Congenital intrauterine infections have been associated with poor pregnancy outcome ranging from spontaneous abortions, still births, congenital malformations, intrauterine growth restriction, fetal deaths, developmental delay and many other sequels that can be seen later in life [1]. Cytomegalovirus (CMV), rubella and parvovirus B19 (B19) infections are among the principal blood borne viral infections that are transmitted transplacentally [2]. Primary and secondary of these infections in pregnant women are often inconspicuous, but may result into serious fetal damage [3-5]. With exception of few countries like Nigeria, epidemiology of these infections in pregnancy is not well documented in Africa. More than 85% of adults are infected with CMV in developed countries, and the prevalence has been found to be higher among adults and pregnant women in countries with low socio economic status [6,7]. On the other side, natural immunity to rubella among pregnant women in Africa, has been found to range from 52.9 to as high as 97.9% indicating high transmission rates [8].The data regarding the magnitude of Parvovirus B19 in many developing countries are scarce but have been found to be higher worldwide with sero-conversion rates ranging from 3 to 34% during pregnancy [9-11].

A cross sectional hospital based study was carried out between December 2014 and August 2015 involving pregnant women from Makongoro and Karume antenatal clinics representing urban and rural areas respectively as defined by Mwanza city council. After obtaining written informed consent from participants, 4-5 ml of blood were collected using plain vacutainer tubes (Becton, Dickinson and Company, Nairobi, Kenya) and transported to the Bugando multipurpose laboratory whereby sera were separated and stored in cryovials at -40°C freezer until processing. Standardized data collection tool was used to obtain socio-demographic information. Data collected included; age, gestation age, parity, residence, education level and socio-economic status. Women with no formal education and primary education attendees were considered having low education level while those attained secondary and tertiary education were considered having higher education level. Good social economic status was defined as being educated with sustainable income or having any income generating activities [13].

Quantitative and qualitative detection of specific rubella, CMV and B19 IgM and IgG antibodies were done by using commercial indirect enzyme-linked immunosorbent assay (ELISA) (Pishtaz Teb Diagnostics kits, Iran). Consequential steps carried out according to protocols of Pishtaz Teb Corporations (https://www.pishtazteb.com) using ChemWell® 2910-Awareness Technology Inc. USA. These IgG and IgM assays have been found to have sensitivity and specificity of >95% [14-17]. Before performing the test the method was calibrated by using the provided standards and controls to obtain a standard curve.

Data were entered using Microsoft Office Excel 2007 and analyzed using the STATA version 11 (College Station, Texas, USA). Categorical variables were summarized as proportions while continuous variables were summarized as median with interquartile range. Univariate logistic regression analysis was done to investigate association of coinfections with gestational age and age of participants. Odds ratio (OR) and 95% confidence interval [95% CI] were noted and a p value of < 0.05 was considered significant.

The protocol for conducting the study was approved by the Joint Catholic University of Health and Allied Sciences/Bugando Medical Centre (CUHAS/BMC) research ethics and review committee (CREC). Permission was sought from hospital/clinic administration and written informed consent was obtained from each participant prior enrolment to the study.

Table 1: Proportions of pregnant women co-infected with CMV, Rubella and B19 viruses in Mwanza.

Table 2: Gestation age and CMV, rubella and B19 infections. 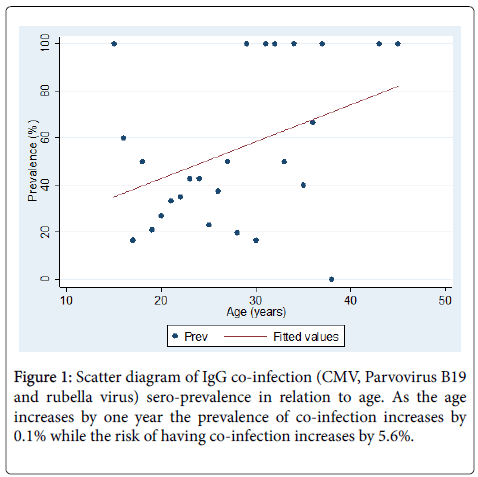 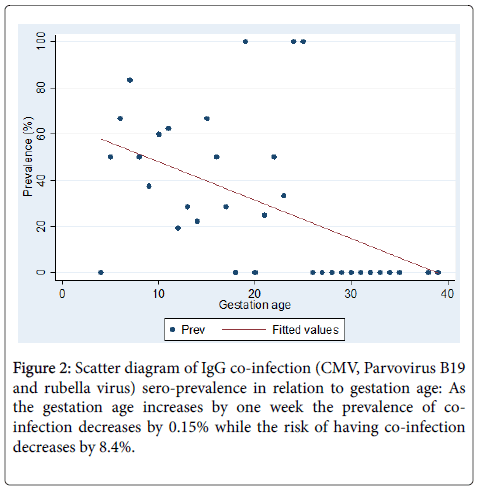 To the best of our knowledge this is the first report in Tanzania indicating the magnitude of viral co-infection with potential for congenital infection among pregnant women. The most important finding is the high proportion of past co-infections indicated by detection of IgG specific antibodies to all three viruses. This observation is supported by previous studies which showed high proportion of individual infection [8,12,18-21]. High level of natural immunity to these viruses indicates high transmission rates in this population necessitating the need for screen during antenatal visits.

In contrast to previous study in Africa prevalence of acute CMV infection was very low in the current study [21]. However, there is a need to investigate this further to explore the significance of multiple viral infections and severity of congenital anomalies. This also suggests endemicity in this area as evidenced by rubella IgG sero-prevalence observed by Mwambe et al. [12]. High prevalence rates are alarming considering the possible consequences.

Effect of seasonality and geographical distribution might also account for high reported proportions. This study was conducted during rainy season alternating with dry season which has been shown to influence viral transmission [24,25]. Further studies to investigate seasonal variations are highly recommended in this area.

As the age increases the prevalence of co-infection and individual infection also increases. Due to the fact that these infections are common during childhood; exposure during this time may explain such high proportions of natural immunity as previously described [8,26].

In contrast to individual infections [12,27,28], it was observed that as gestation age increases the risk of being co-infected decreases significantly. These results might have been influenced by CMV IgG sero-positivity because when individual infections were analyzed it is the only one which was found to be significantly associated with gestation age. This observation could not be explained or supported by previous studies. Therefore, further studies to investigate these aspects are highly recommended.

The study was cross-sectional so participants were not followed especially for those found IgM positive to determine the outcome of the pregnancy. In addition ultrasound to detect fetal abnormalities was not performed. Failure to do PCR and avidity test to confirm the acute infection is another limitation of the study.

Significant proportion of pregnant women in Mwanza is infected with at least one virus and more than one third of these women have markers for previous co-infections of rubella, CMV and B19.

This calls for urgent need to screen these women during antenatal visits for proper counseling and advice on the potential of the outcomes that can be caused by these viruses during pregnancy.

Moreover, immunization of susceptible pregnant women to rubella virus infection after delivery will have more impact of controlling congenital rubella syndrome (CRS) in subsequent pregnancies. A follow up study to establish the outcome of pregnancy for IgM seropositive women is highly recommended.

Authors declare to have no competing interest

The authors would like to acknowledge the technical support provided by Mr. Mkama, Mr. Vitus Silago, Ms. Carol, Mr. Benard Okamo, Ms. Maria Mwacha and Mrs. Damson. We thank all staff at KAMANGA Medics, Makongoro and Karume antenatal clinics. This study was supported by research grant from CUHAS to MMM.

Copyright: © 2016 Mirambo MM, et al. This is an open-access article distributed under the terms of the Creative Commons Attribution License, which permits unrestricted use, distribution, and reproduction in any medium, provided the original author and source are credited.