Copyright: © 2016 Basra AS, et al. This is an open-access article distributed under the terms of the Creative Commons Attribution License, which permits unrestricted use, distribution, and reproduction in any medium, provided the original author and source are credited.

Aim: The present study was conducted to access the prevalence of deleterious oral habits among school going children as these practices have a great impact on the dental hard and soft tissues. Methodology: This study was conducted among children aged between 7 to 13 years. The sample was selected from urban and rural schools. A closed-ended questionnaire was used in the survey for collecting the information like age, gender, area of residence and presence of deleterious oral habits. These questions were asked to parents for the habits like bruxism, tongue thrusting, digital sucking, mouth breathing, nail biting and lip biting. Chi-square test compared the frequency of oral habits in relation to age, sex and area. Statistical tests were used at a significance level of p<0.05. Results: It was noticed that bruxism (14.4%) was most common habit followed by mouth breathing (12.6%), digital sucking (9.2%), nail biting (8.3%), lip biting (8.1%) and tongue thrusting (7.2%). Bruxism (4.7%) and tongue thrusting (3.4%) had the highest occurrence in (9 to 11 years) group. Digital sucking (3.6%) and mouth breathing (6.3%) was mostly observed among younger age group (7 to 9 years). However nail biting (4.3%) and lip biting (4.7%) was commonly noticed in older sample. Conclusion: The study observed that bruxism was most frequent habit among children. There was also a variation in the occurrence of oral habits in relation to age.

Deleterious oral habits (DOH) are one of the most frequent habits observed by dental surgeons that have a great impact on the normal growth and development of muscles and jaw bones during childhood and adolescence stages of life [1]. These oral habits are learned patterns of muscular contraction and have great complex nature. At the beginning these are conscious and after some time it become unconscious [2].

The authors in most of the studies mentioned that etiology of oral habits may have a significant task in the development of dental anomalies and malocclusion as they produce a disproportion between the intra and extra musculature of oral cavity [3]. The extension of these disorders varies from individual to individual depends on their actual jaw relationship and the frequency of habit [4].

The prevalence of these harmful habits is widespread in younger population of most of the regions [5]. A study reported the incidence of thumb sucking as 82% for the period of first 5 months of birth [6]. Literature has also concluded that various digital sucking habits can have diverse effects on the dentition [7]. As habits alter the tooth position which further affects the verbal communication [8].

If these detrimental habits are not diagnosed in the initial stages, then it can be a complex procedure to correct the problem in advance stage. Sometimes, in severe cases, even it requires orthognathic surgery to correct the jaw position altered with such habits [9]. So, these habits require proper attention to provide essential care to child patients. Hence, the study was done to establish the prevalence of deleterious oral habits among children.

This study was conducted among a group of school children aged between 7 to 13 years in Ferozepur, India. Before scheduling the study, permission was obtained from the Head of the Institute.

The sample was selected from four schools (two from the urban area and two from the rural area) using simple random sampling technique. So there were around 560 students of selected age group. Children with orthodontic appliances, medical problems and those who were absent on the days of visit were excluded from the study. The final sample was finalized as 444 children.

A closed-ended questionnaire was used in the survey for collecting the information like age, gender, area of residence and presence of deleterious oral habits. These questions were asked to parents for the habits like bruxism, tongue thrusting, digital sucking, mouth breathing, nail biting and lip biting.

For confirmation of tongue thrusting, patients were asked to swallow saliva three times consequently [10]. A two-sided mirror is placed under patient’s nostrils and formation of vapors is noticed for the detection of mouth breathing. If vapors occur on lower part of mirror it means patient is having mouth breathing and on the upper part illustrates nasal breathing [11]. The inspection of finger was done for digit sucking.

The results were analyzed using SPSS version 16.0 (SPSS Inc., Chicago, Illinois, USA). Chi-square test compared the frequency of oral habits in relation to age, sex and area. The association between habits and age was also correlated using the Pearson correlation. Statistical tests were used at a significance level of p<0.05. 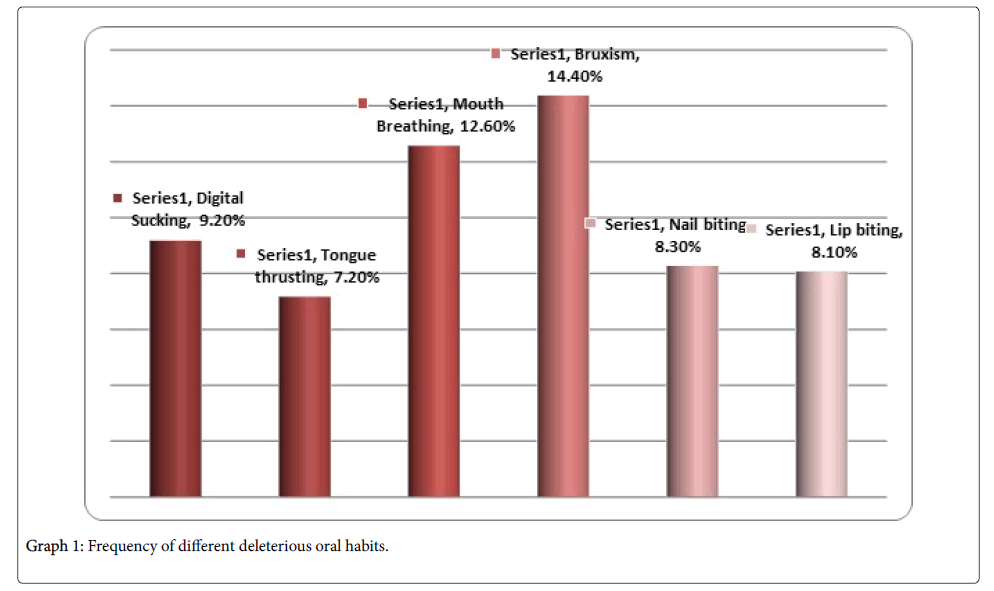 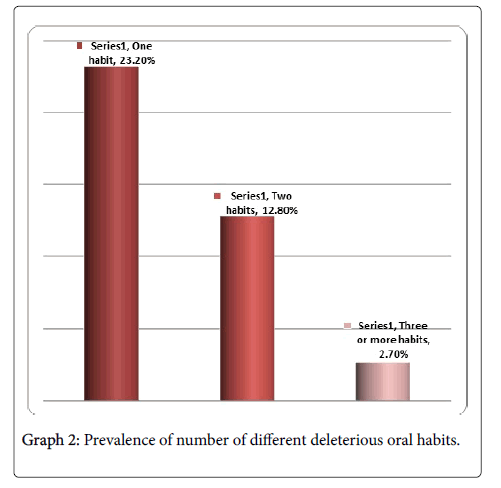 According to gender, bruxism and nail biting was more regularly seen in boys whereas rest all the oral habits were observed among girls (Table 1). Deleterious oral habits such as bruxism and tongue were seen with higher frequency in urban population and rest of the habits was common in the rural population. All the findings showed significant differences according to location except digital sucking and lip biting (Table 2).

There was a negative correlation value between oral habits and age, as with the advancement of age, the prevalence of deleterious habits decreased (Table 4).

**Correlation is not significant at the 0.01 level (2-tailed)

Table 4: Correlation of prevalence of deleterious oral habits with age.

The relative prevalence of oral habits in school-going children in India has been reported to be as low as 3% in rural children of Ambala in North India [11] to 29.7% in Mangalore in South India [12].

In the present study, 23.2% of the sample had one or more deleterious oral habit. Kharbanda et al. reported comparable prevalence of oral habits in north Indian children population [13]. Whereas these results were lower compared with Garde et al. study showing the prevalence of (51%) in India [3] and Stefanescu et al. showed prevalence rates as 38.7% [14]. But lower results of these habits were observed among Nigerian children (9.9%) [15]. This difference in the prevalence of oral habits could be due to sample of different age groups, cultural backgrounds and environmental factors which have significant impact.

The frequency of such habits were mostly common among girls compared to the opposite gender. Similar results have been reported by Stefanescu et al. [14] and Reyes [16]. It could be due to the harmonal changes among girls. Whereas, Karbhanda et al. mentioned that some oral habits were more common in the female gender [13].

The occurrence of tongue thrusting was comparatively low in this study sample and the findings were comparable to the study carried out by Shetty and Munshi among children in Mangalore [12]. Tongue thrusting was at peak in the age group of 9 to 11 years during the mixed dentition stage that repeatedly leads to open spaces, that provokes this habit.

The variations in this study can be characterized according to different age groups as, some oral habits like bruxism, digital sucking and mouth breathing mostly seen in younger age group, whereas nail biting and lip biting in the elder age group. These graphs are related to the study of Massler and Malone [18]. Almonenanitiene et al. also experienced the occurrence of nail biting in elder age group [19]. On contrary, Santos et al. reported that the oral habits were more noticed in young population of Brazil [20].

Furthermore, the quantity of digital sucking was in higher proportion in younger age (7 to 9 years) and the results were consistant with the study by Franco Varas et al. reported thumb sucking as most frequent habits during early age group [21]. However, Pruneda et al. stated that finger sucking practice was the second common habit followed by nail biting among Mexican children [22]. This variation could be due to the psychoanalytic theory as children grow, they tend to follow some habits and some are discarded [23].

The study reported high prevalence of oral habits among the sample and the most frequently occurring one was bruxism followed by mouth breathing. Digital sucking and mouth breathing was mostly observed among younger age group (7 to 9 years). However nail biting and lip biting was commonly noticed in older sample. Also a negative correlation of these habits was seen with age. These graphs also provided a baseline data for planning preventive services in order to diminish the complications.