Demographics, Clinical Presentation and Outcome of Multiple Myeloma in Bermuda

Methods: The study involved a review of patients diagnosed with haematological malignancy including MM using hospital records retrieved from Bermuda Hospital Board database, between January, 2010 and December, 2014. Demographic, clinical and laboratory data on patients with MM were collected and analysed.

Conclusion: The incidence of MM in Bermuda is higher than that reported from the United Kingdom and the United States and the condition is more common in women. The age at diagnosis and clinical presentation and prognosis of MM in Bermuda are comparable with reports from the Western world. Further studies to address the survival of patients with MM in Bermuda receiving different treatment options should be considered.

Multiple myeloma (MM) is the neoplastic proliferation of plasma cells in the bone marrow characterized by the production of monoclonal immunoglobulin, extensive skeletal destruction with osteolytic lesions, osteopenia and/or pathologic fractures and hypercalcaemia. The highest incidence occurs in the industrialised regions of Australia/New Zealand, Europe and North America [1]. Incidence and mortality seem to be stable in Asian countries but has been increasing slowly over the decades among whites in the western countries [1]. Multiple myeloma accounts for 1-2% of all cancers and 10-15% of all haematological malignancies in the United Kingdom and United States [2-4]. The incidence of MM in the United Kingdom estimated by the Haematological Malignancy Research Network (HMRN) is 6.9 per 100,000 per year. Incidence rates are similar in the United States, with the Surveillance, Epidemiology and End Results Program (SEER) [4] estimating 6.3 per 100,000 per year. In a study performed by Waxman AJ et al. in 2010, they review data obtained from the original 9 registries of the NCI SEER program from 1973-2005 in the United States in which 5,798 black and 28,939 white patients were diagnosed with MM, the age-adjusted MM incidence rates were 11.0 and 4.9 per 100,000 for blacks and whites, respectively [5]. Unlike other haematological malignancies, the incidence of MM is highest in Afro-Caribbean populations followed by Caucasian and Asian populations [5]. The incidence in males is two to three folds higher than in females and increases with increasing age. The average age at diagnosis ranges from 65-70 years in Western countries [5-8].

Patients with myeloma are more commonly anaemic than patients with other haematological malignancies, such as Hodgkin’s and Non- Hodgkin’s Lymphoma [9]. This has been associated with poor quality of life and prognosis [9-11]. Recently myeloma was reported as the fourteenth leading cause of cancer death in the United States [4] and where the number of deaths due to MM was 3.3 per 100,000 per year [4]. Similarly Myeloma was the 15th most common cause of cancer death in the UK during 2014, accounting for 2% of all cancer deaths [12]. The Bermuda National Tumour Registry Annual Report for 2013 stated that cancer was responsible for 30.2% of deaths [13].

This study was undertaken to investigate the incidence of MM in Bermuda compared with other parts of the world and the contribution of MM to cancer morbidity and mortality.

As shown in Table 1, The Tumour Registry database contained 2009 patients with cancer over the period of study and newly diagnosed haematological malignancies accounted for 7% (144/2009) (Table 1). 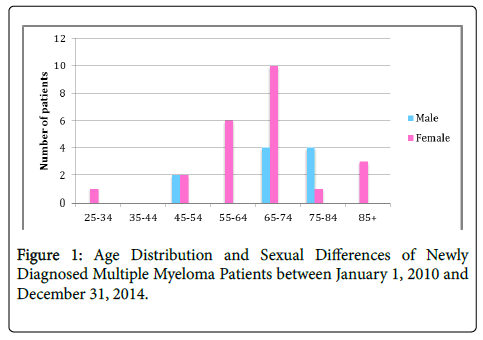 The clinical presentations at the time of diagnosis in the 33 patients with MM are summarized (Figure 2). Anaemia (79%), followed by bone pain involving the lower back and hip (45%), hypocalcaemia (42%), neoplastic systemic symptoms (39%) and renal insufficiency (36%) were the most common manifestations. The neoplastic systemic symptoms included fever, weight loss and night sweats. The majority of patients (15/33, 45%) were diagnosed with stage 2 disease while stage 1 disease was identified in 9 patients (27%) and 8 (24%) had stage 3 disease at diagnosis. Staging was not determined for 1 patient (3%) as albumin and beta2-microglobulin results were unavailable (Figure 2). 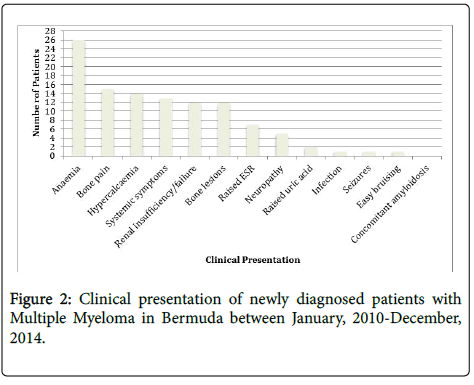 This is the first study highlighting the demographics, clinical presentation and outcome of patients with MM in Bermuda. The incidence of MM in Bermuda observed in the present study is higher than that reported for the UK and US [3,4]. A gradual increase in the number of cases diagnosed with MM from 2010 to 2014 was observed. This can be due to increased awareness and recognition of the clinical features of the disease by physicians and greater opportunity to perform diagnostic tests easily. The racial disparities in MM have been discussed by several authors. The incidence of MM in blacks in Bermuda was higher compared with that observed in black populations in the United States. The mean age at diagnosis for patients with MM in Bermuda was comparable with that reported from other countries [2-4,8]. Myeloma is predominately a disease of the elderly and very few cases have been diagnosed in patients less than 40 years of age. As mentioned the youngest patient diagnosed with MM in Bermuda was a black female aged 33 years. The female preponderance of MM observed in the present study is in conflict with reports from the US and UK where MM is more commonly diagnosed in male patients [2-4,8].

The frequency of the clinical presenting features of MM including anaemia, bone pain, hypocalcaemia, systemic symptoms and renal insufficiency in this Bermudian cohort was similar to that reported in other countries. The stage of disease at presentation is a recognized significant prognostic factor. Griepp et al. [16] reported that the median survival rates for patients diagnosed with stage 3 disease was 29 months compared with 45 months and 62 months for stages 2 and 1, respectively. In the present study more than two thirds of the patients presented with a moderately severe disease in keeping with stages 2 and 3, and of these, half were deceased at time of initiation of retrospective analyses.

In one study involving the prevalence of tumour genetic marker in patients with MM, immunoglobulin heavy chain (IGH) gene translocations were more common in females compared with males [17]. The cytogenetic abnormalities associated with poor prognosis identified in that study included monosomy 13, mutations involving 1q21, t(4:14), t(14:16) and TP53. In the current series the identified poor cytogenetic abnormalities were observed in just over 10% and might not have contributed substantially to the survival of the patients. On the other hand the advances in treatment strategies employed for all of our patients might have influenced survival rates even in the patients with poor prognostic cytogenetic markers. Also the majority of the deceased patients were black and monosomy [13], and 1q21 mutations might have contributed significantly to the adverse prognosis [17].

The limitations of this study are the small sample size, absence of information regarding therapy, response rate, progression free survival and follow-up data.

In conclusion, the incidence of MM in Bermuda is more common in females than in males in contrast to reports from other western countries. The clinical presentations and prognosis of MM in patients in Bermuda are similar to those seen in the Western World. Follow up studies should be considered to understand the correlation between different treatments and outcome of the patients.

We would like to extend our gratitude to Bermuda National Tumour Registry, Health Information Management Services, and Daphne Jones (Senior Technologist in Histopathology), for their individual assistance in the collection, interpretation and presentation of the data in this study.

Copyright: © 2017 Knight E, et al. This is an open-access article distributed under the terms of the Creative Commons Attribution License, which permits unrestricted use, distribution, and reproduction in any medium, provided the original author and source are credited.