Copyright: © 2017 Birega MG, et al. This is an open-access article distributed under the terms of the Creative Commons Attribution License, which permits unrestricted use, distribution, and reproduction in any medium, provided the original author and source are credited

Background: The world drug problem continues to constitute a serious threat to public health and to the safety and well-being of humanity. It is also one of burning public health problem in Ethiopia. There is research evidence that showed increment of trend of substance abuse among high school and college students.

Objective: To assess the magnitude of substance abuse among students of Aman Poly Technique College in 2016.

Methodology: A descriptive quantitative cross sectional study was conducted to assess the magnitude of substance abuse among the students of Aman Poly Technique College.

Results: The overall Prevalence of substance abuse was 42.5%. The commonly used substances were chat chewing 65%, Alcohol 28% and cigarette 4.8%. And the reasons to initiate substance abuse were peer pressure were36.8%, to relive from tension 20% and academic dissatisfaction were 18.4%.

Conclusion: According to this study we conclude that chat was the most abused substance followed by alcohol and peer pressure was the most significant reason to initiate substance abuse.

The world drug problem continues to constitute a serious threat to public health and to the safety and well-being of humanity-particularly children, young people and their families [1]. About 230 million people or 5 percent of the world’s adult population are estimated to have used an illegal drug at least once in 2010. Alcohol and other drug (Khat and tobacco) users number about 27 million, which is 0.6 percent of the world adult population [2].

The United Nations Office on Drugs and Crime reports while drug use is stabilizing in industrialized countries, it is increasing in developing nations [3]. In Ethiopia a national study reported 23.0% of out-of-school and 7.5% of in-school adolescents use khat [4]. A separate study estimated prevalence of khat use in the general population of Ethiopia was 27.3% among men and 11.0% among women of 15-49 years in 2011 [5]. Heavy consumption of khat is associated with euphoria, hyper activity, anorexia, insomnia, lethargy and depression. In addition to combined use of alcohol and khat could increase sexual risk behavior contributing to spread of HIV [6,7].

In Ethiopia there is research evidence that indicate substance abuse is also increasing among high school and university student [8]. Substance use remains as an important area of research due to the implications of early substance dependence on the future of the youth [9].

Aman Poly Technique College is found at Mizan-Aman town of Benchi Maji zone of Southern nation nationalities and peoples of Ethiopia regional state (SNNPR) which is located 561 km from Addis Ababa; 234 from Jimma and 4.5 km from Mizan town. Aman TVET Collage was established in 1994 E.c and started its work in the same year by four departments with the total number of less than two hundred students. Currently the college has 885 students, studying 8 fields of technique and vocational education with different level; Level I, Level II and Level III.

Regular students of Aman TVET College in Aman town obtained by sampling during the specified study period were included in the study.

The formula that we were used to calculate sample size in the study was single population proportion formula. Prevalence of point under consideration was (P=50% because to the extent of our knowledge and searching effort, no P value has been obtained about the magnitude of substance abuse in the study area). So the 384 sample size was computed and after using correction formula hence our total population is less than 10,000 the final sample size became 268.

We were used stratified random sampling method followed by simple random technique to select individual students that are to be included in our sample size. Using stratified random sampling method, the total numbers of students in the college were first divided into different strata based on their departments and level of study. Sample was allocated to each departments and level of study proportionally. Finally, simple random lottery method was used to select study participants using sampling frame of students list (Table 1).

Table 1: Showing proportional allocation of sample size in each department and level, May 2016.

A structured questionnaire were prepared and tested to address all important variables. The questionnaire prepared first in English and then translate in to Amharic and back to English in order to maintain its consistency. Information’s included were socio demographic characteristics, substance use (cigarette, alcohol and Chat chewing) and reasons of substance abuse. Pre-test was conducted on 5% of sample size in similar study context at Mizan Agricultural College. Training and orientation was given for data collector two days in advance of data collection period. Three public health graduating students under supervision were participated in data collection.

The data was processed manually using tally sheets. Each questionnaire was checked for completeness, missing values and unlikely responses and then it was manually clean up on such indication. Data were manually analyzed using scientific calculator. Descriptive statistics and summary measures were employed.

Primarily, ethical clearance was obtained from Public Health and Medical Science college ethical review committee. Letter of permission was given to Aman Poly Technic College Dean office and respective departments. All respondents were asked for their willingness for participation in the study and informed verbal consent was obtained after confidentiality of the information assured.

Magnitude of substance use

Of the total of study participants 125 (42.2%) reported that they have experience of using substance at least once in their life time. Among users more than three fourth 107 (85.6%) were males. Concerning type of substance reported by users were chat, alcohol and cigarette by 24.3%, 68.2% and 3.7% study respondents, respectively, as shown in Table 3.

Table 4: Frequency of current and ever substance users among Aman Ploy Technique College.

Time of initiation for substance use

Concerning initiation time of substance use, more than majority 66.40 of substance users reported than they started at college level followed by 24% at high school and preparatory school, as shown in Figure 1. Figure 1: The time in which students started to use abused substances among Aman TVET students, May 2016.

From reason to initiate substance abuse peer pressure accounts 36.8% and academic dissatisfaction, to relive from tension, to get personal pleasure and availability of substance account 18.4%, 20%, 16% and 8%, respectively (Table 5). 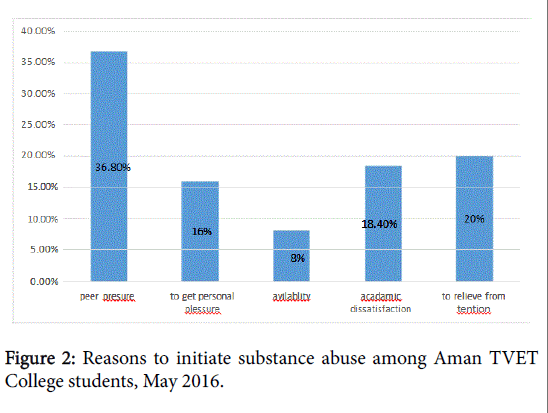 Ever smoke of cigarette among these study participants was 2.1%. This finding was higher than study conducted Ayer Tena secondary school student in Ethiopia (0.8%) [16] but it much lower than other studies, Preparatory students at Ginner town (8.5%) [17] and Zambia Adolescent (27%) [18].

Substance abuse among Aman Poly Technique College student was prevalent, the most abused was chat chew followed by alcohol and cigarette smoking. The study call up for health education activities for this target groups and the need of further research around the study area. 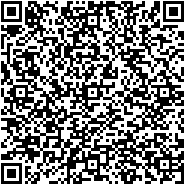