Copyright: © 2014 Tatarczak-Michalewska M, et al. This is an open-access article distributed under the terms of the Creative Commons Attribution License, which permits unrestricted use, distribution, and reproduction in any medium, provided the original author and source are credited.

A novel series of 1,2,4-triazole derivatives, have been synthesised. All synthesised compounds were screened for their antimycobacterial activity against Mycobacterium tuberculosis and antimicrobial activities against various bacteria and fungi. Among studied derivatives, 4-methyl-1-morpholinmethyl-2,4-dihydro-3H-1,2,4-triazol-3-thione was found as the most active, demonstrating inhibition of mycobacterial growth of Mycobacterium H37Ra at the same concentration level as Streptomycin. The quantitative analysis of this compound in the urine and serum samples was elaborated on. Quantification was performed by reversed-phase high-performance liquid chromatography (RP–HPLC) using C18 column with a mobile phase consisting of methanol and water (5:95) at flow rate of 1 ml/min. The chromatograms were recorded at 245 nm at 21°C. The chromatographic peak identification was based on the comparison the retention times and UV spectra of isolated analyte and synthetized standard. Moreover, different sample pre-treatment methods such as deproteinization and solid-phase extraction (SPE) were compared. The highest analyte recoveries ranging from 78,7% to 90,7% were obtained for sample deproteinized by 6% HClO4.

Tuberculosis (TB) belongs to infectious disease caused by Mycobacterium tuberculosis. There is an estimated 2.5 billion people infected with tuberculosis worldwide and an annual mortality of approximately 1.5 million people [1,2]. Despite the availability of TB first-line drug therapy consisting of rifampicin (RIF), isoniazid (INH), pyrazinamide (PZA), streptomycin (STP) and ethambutol(EMB), the increase in the incidence of both multidrug-resistant (MDR-TB) and extensively drug-resistant tuberculosis (XDR-TB) are observed [3,4]. Furthermore, treatment requiring the use of combination therapy causes serious side effects such as: thrombocytopenia occurring mostly due to rifampicin (RIF) [5], neuropathy induced by INH and the biggest problem connected with TB treatment- drug-induced hepatitis [6]. Considering that, the searching for novel antituberculosis substances, appears currently to be a dire must. As it could be observed, the synthesis of new compounds with anti-tuberculosis activity has been the target of many medicinal chemistry projects.

So far, a number of stable metal complexes with INH [7,8], ciprofloxacin and phenanthroline [9] possessing anti-tubercular activity have been designed. However, a special interest has been focused on five membered heterocyclic compounds derivatives of pyrrole [10], oxadiazole [11], imidazole [12], N-aryl-C-nitroazole [13] and triazole [14,15].

Many previous studies have shown that 1,2,4-triazole derivatives exhibit many promising biological properties. The significant differences in their activity depend on structural modifications. According to the chemical nature of the substituents, 1,2,4-thiazole derivatives display diverse pharmacological activities such as anti-inflammatory, antifungal or antiviral ones. Besides that, there exists a number known of drugs containing the 1,2,4-triazole group such as psychoactive Triazolam, Alprazolam, Etiazolam or antifungal Fluconazole, Ravuconazole, Voriconazole. In the light of recent data, 1,2,4-triazole derivatives could be also considered as potential tuberculostatic agents [13-16].

In our research project 1,2,4-triazole derivatives were synthesised and screened for their antimycobacterial activity against Mycobacterium tuberculosis. This article presents the use of optimal chromatographic system to perform quantitative analysis of the most active derivative of 1,2,4-triazole in the biological material (serum, urine). Moreover, the presented study is devoted to comparison of the most widely used sample preparation methods such as deproteinization by mineral acids and organic solvents and solid-phase extraction: SPE, which allows choosing the method characterized by the highest recovery of the analyte.

A new derivative of 1,2,4-triazole (Figure 1), was synthesized in the Department of Organic Chemistry in Medical University of Lublin [17].

Its structure was confirmed by GC-MS, 1H-NMR, 13C-NMR and IR analysis and the purity was assessed by elemental analysis. Quantitative determination of the examined compound in the serum and urine samples was performed by high performance liquid chromatography using an external standard approach. Analysis was performed using Merck-Hitachi Lachrom Elite HPLC chromatographic system with a gradient pump and photodiode array spectrophotometric (PAD) detection. The investigated samples were loaded on the Agilent Eclipse XDB C18 column (4.6 × 150 mm, 5 μm) using a Hamilton microsyringe and a Rheodyne dispenser equipped with a 20 μl sample loop. The mobile phase consisted of methanol and water (5:95). The flow rate was 1 mL min-1. The detection of the compound was set at 245 nm chosen accordingly with the recorded spectrum in the range of 200-900 nm. Identification of peaks in the chromatogram was performed based on the comparison the retention times and UV spectra of each analyte to the respective retention times and UV spectra of the standard. HPLC grade methanol (MeOH), was obtained from E.Merck (Darmstadt, Germany). Perchloric acid (70%, w/v) was purchased from J. T. Baker (Phillipsburg, NJ, USA). The mobile phase was filtered through a Nylon 66 membrane filter (0.45 μm) Whatman (Maidstone, England) by the use of a filtration apparatus. Statistical analyses were performed using the software: Excel 2003 (MS Office) and STATISTICA version 5.1 for Windows.

All samples for the determination of an analyte in the biological material were prepared immediately before use by adding appropriate volumes of stock solutions prepared at concentrations of 0.025, 0.05 and 0.1 mg mL-1 to a blank serum or urine samples obtained from hospital laboratory. Solid-phase extraction (SPE) was performed using Baker SPE 12G system and Bakerbond SPE Silica Gel columns (J. T. Baker).

Deproteinization with 6% HClO4 : A 3 mL of 6% HClO4 was added to 1 mL of serum spiked with 1 mL of the investigated compound at the concentrations of 0.025, 0.05 and 0.1 mg mL-1, respectively, and shaken for about 15 min. After centrifugation (2,000 rev/min for 10 mins) the clear supernatant was evaporated to dryness and dissolved in 1 mL of eluent. The prepared samples were loaded directly on a chromatographic column. Typical injection volumes were 20 μL corresponding to the volume of the Rheodyne injector loop. Each sample injection was analyzed in three replicates.

Solid phase extraction was performed using Bakerbond SPE Silica Gel columns. The columns were conditioned prior to sample adsorption with 2 mL of methanol and 4 mL of hexane. 1 mL of serum containing 0.025, 0.05 and 0.1 mg mL-1of investigated derivative, deproteinized with 6% HClO4., was then applied to SPE columns. Analyte elution was accomplished with 1 mL of methanol. Three samples were prepared for each of the concentration levels (0.025, 0.05 and 0.1 mg mL-1).

All urine specimens containing investigated compound were prepared for analysis using solid phase extraction procedure. SPE was performed with Bakerbond SPE Silica Gel (SiOH) columns. The columns were conditioned prior to sample adsorption with 2 ml of methanol and 4 mL of hexane, and 1 mL of urine diluted with phosphate buffer at pH 7.04 (1:1) was then applied. Analyte elution was accomplished with 1 mL of methanol.

Three samples were prepared for each concentration levels (0.05; 0.075 and 0.1 mg mL-1). Each sample injection was analyzed in three replicates.

Minimum inhibitory concentration (MIC), Minimum Bactericidal Concentrations (MBC), and Disk Diffusion against Mycobacterium smegmatis ATCC 20 (American Type Culture Collection), Mycobacterium Phlei and Mycobacterium H37Ra for investigated compound was carried out in Muller Hinton Broth (Oxoid, Anglia) medium applying broth dilution method. Disc diffusion assay was evaluated using Whatman filter paper discs prepared by pipetting 10 μl of solutions containing 250 μg of substance and placed on agar plates. After incubation for 24 hours at 37°C, a clear zone around a disc was an evidence of antimycobacterial activity. All biological tests were prepared together with Rifampicin and Streptomycin sulfate antibiotics as a control. A more extensive description of the methodology of the microbiological investigation is presented in the literature [18-21].

The best peak parameters regarding sensitivity, symmetry, retention time and chromatographic efficiency were obtained for the Agilent Eclipse XDB C18 column and the mobile phase consisted of methanol and water (5:95). Figure 2 shows a typical chromatogram obtained for the investigated derivative.

The proposed chromatographic system is characterized by short time analysis equaling 3.9 minutes. According to absorption spectrum elaborated on for examined compound in the range from 200 nm to 900 nm, the maximum wavelength was established. Further experiments with photodiode array detection were performed at analytical wavelength of 245 nm (Figure 2). 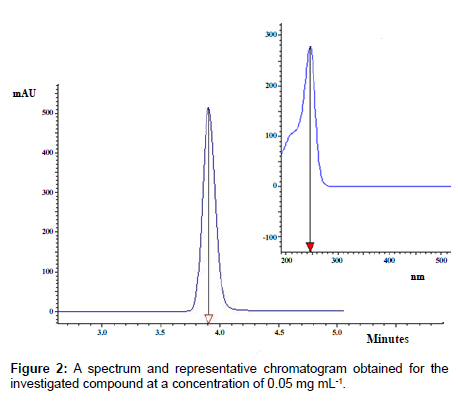 Figure 2: A spectrum and representative chromatogram obtained for the investigated compound at a concentration of 0.05 mg mL-1.

The calibration curve was prepared using five concentrations in the range of 0.01-0.1 mg mL-1. A 20 μL of each dilution was injected in triplicate. The mean peak areas were taken for the construction of the calibration curves. The data were analyzed by linear regression least square model. The equation for the regression line of this relationship was found to be:

Body fluids, including serum and urine, are the most accessible and investigated materials in clinical laboratories. The quantitative methods of substances assay in biological fluids should be elaborated on for the study of their pharmacokinetics as the potential drugs. When dealing with biological samples, endogenous matrix containing phospholipids and peptides is the main cause of both contamination of chromatographic columns causing instrument downtime and reduction sensitivity and accuracy of quantitative analysis [22-24].

Deproteinization methods typically involve treatment one volume of serum (or plasma) with three volumes of water-soluble acid or organic solvent. Proper solvent selection significantly affects further analysis. For quantification of the investigated compound in biological fluids urine and serum samples, different precipitating reagents and their various proportions were tested. Using 6% CCl3COOH, a significant loss of investigated analyte was observed which may indicate a lack of stability of the compound in this acid. In turn, acetonitrile and methanol, used as precipitating agents, allowed obtaining very low recoveries of analyte in the range of 15.4% - 46.4%. The best recoveries ranging from 78.7% to 90.7% were obtained by the use of 6% HClO4. It can therefore be assumed that the investigated compound due to the basic character is highly bounded to plasma proteins, and only the use of a strong acid such as perchloric acid may release it. Figure 3A shows a chromatogram of a serum sample spiked with the investigated compound deproteinized by 6% HClO4.

Figure 3: Representative three dimensional (3D) chromatograms of serum pre-treated by 6% HClO4 (A) and urine (B) samples containing the investigated compound.

Comparing the three dimensional chromatograms of serum pretreated by 6% HClO4 and urine samples prepared by SPE one could conclude that lower recovery obtained for urine samples is directly connected with insufficient sample cleaning step by SPE. Due to matrixinduced interferences visible on 3D graph, appearing as consequences of co-elution of matrix components with target analyte, reduction accuracy of determination is observed [24].

Statistical parameters describing the accuracy and precision of a measurement are summarized in Table 1.

Disc diffusion assay showed promising inhibition activity of the investigated compound against Mycobacterium H37Ra strain comparable with Streptomycin used as a reference substance. Important results of these assays are disclosed in Table 2 together with the data for control drugs as Rifampicin and Streptomycin. MIC (Minimal Inhibitory Concentration) and MBC (Minimal Bactericidal Concentration) values of tested strains of microorganisms are presented in Table 3. Presented results suggest that the investigated compound is similar in inhibition activity against Mycobacterium H37Ra to Streptomycin. The values of MIC and MBC are exactly the same for both substances.

The synthetized 1,2,4-triazole derivative compound, namely 4-methyl-1-morpholinmethyl-2,4-dihydro-3H-1,2,4-triazol-3- thione, demonstrates tuberculosis inhibition activity similar to the control drug - Streptomycin. The reported analytical method for its quantitative determination in body fluids exhibits good recovery in the range from 78.7 to 90.7% and precision expressed as RSD from 0.19 to 0.15 for the concentration ranging from 0.025 to 0.1 mg mL-1. The 6% perchloric acid appeared to be the most effective agent for biological samples pre-treatment for further HPLC analysis. The elaborated method can be applied for planned pharmacokinetic studies of this promising compound. This method can be recommended for analysis of 1,2,4-triazole derivatives in body fluids.