Diagnosis and Management of Thyroid Nodules with Atypia: A Three-year Study at an Institution in Taiwan

Objective: According to Bethesda System for Reporting Thyroid Cytopathology, the category, atypia of undetermined significance (AUS), is estimated to have a low malignancy risk of around 5%-15%. Variable surgical malignancy rates of AUS have been reported in diverse populations. The present study evaluated the malignancy rate at our institution and associated demographic data to identify high-risk nodules.
Methods: In this retrospective study, thyroid nodules with initial fine-needle aspirations (FNAs) reported as AUS from April 2010 to May 2013 were analyzed. Demographic data, clinical managements, and histopathologic results were evaluated.
Results: A total of 7382 aspirations performed during the study period were analyzed; 5.7% were reported as atypia, 70.3% as benign, 1.5% as follicular neoplasm, 2.7% as suspicious for malignancy or malignant, and 19.8% as nondiagnostic. A total of 388 patients with one nodule reported as AUS were enrolled for analysis; 86 (22.2%) underwent surgical biopsy directly, 127 (32.7%) received follow-up FNAs, and 175 (45.1%) received clinical observation. The malignancy rate in the 86 patients who underwent surgical biopsy directly after first AUS was 17.4%. Out of the 127 patients who received follow-up FNAs, 105 were reclassified into the different-rank risk categories (benign, neoplasm or malignancy, and nondiagnostic) and 22 remained in AUS. Among the 33 patients out of 127 who received thyroid surgery after follow-up FNAs, the malignancy rates in the 8 patients with repeated AUS results and 11 patients with benign results in the second FNA were 50% and 9.1%, respectively. No significant difference in sex, age, nodular size, numbers, and preoperative thyroid-stimulating hormone level between the benign and malignant groups in the thyroid AUS cases was observed.
Conclusion: Repeated AUS may be associated with a higher malignancy rate in final histopathology, and other supplementary techniques are required to enhance preoperative diagnostic accuracy.

Fine-needle aspiration (FNA) is the procedure of choice for evaluating thyroid nodules and has been widely applied in clinical settings [1]. Based on the cytopathological results, a clinician can determine whether to perform surgical biopsy or not and thus avoid unnecessary operation. However, various reporting systems with two or more categories have been adopted at several institutions which has caused confusion among cytopathologists and clinicians [2]. For consensus on the terminology and enhance communication, the National Cancer Institute (NCI) hosted the “NCI Thyroid Fine-Needle Aspiration State of the Science Conference” in Bethesda, MD, in 2007 and proposed a new 6-tiered reporting system, the Bethesda System for Reporting Thyroid Cytopathology (TBSRTC), with each of the 6 categories having a different cancer risk. The categories and their implied risk of malignancy rates were as follows: I. nondiagnostic or unsatisfactory (1%-4%), II. benign (0%-3%), III. atypia of undetermined significance or follicular lesion of undetermined significance (AUS/FLUS) (5%-15%), IV. follicular neoplasm or suspicious for a follicular neoplasm (15%-30%), V. suspicious for malignancy (60%-75%), and VI. malignant (97%-99%) [3].

In the TBSRTC system, the third classification, AUS/FLUS, is used for defining cytologies that are difficult to classify as benign, suspicious, or malignant. Patients with nodules reported as atypia are generally considered a low-risk group, and repeated FNAs were recommended for appropriate initial management. The estimated malignancy of this category is approximately 5%-15%, but higher malignancy rates of 15.7%-45.7% have been reported [4-7]. Undetermined nodules are proposed to be heterogeneous, and at least eight scenarios are listed in TBSRTC to be managed as AUS/FLUS [3].

In this study, we reported the clinical experiences of AUS/FLUS nodules at our medical center in central Taiwan. In addition, we evaluated potentially helpful factors, such as age, sex, number of nodules, and thyroid-stimulating hormone (TSH) level, for identifying high-risk nodules reported with atypia, because these clinical characteristics have been used to predict malignancy in thyroid nodules [8-10].

We have been using the 6-tiered Bethesda system at our hospital, Taichung Veterans General Hospital, Taiwan R.O.C., since 2010. All cases included in this study were reported by the same cytopathologist. The electronic medical records of patients with thyroid nodules who received FNAs from April 15, 2010 to May 31, 2013 at our hospital were retrospectively searched. Thyroid nodules of a size >1 cm with solid or mixed-solid cystic components and those of the size ultrasonography findings, such as microcalcifications, hypoechoic, increased nodular vascularity, infiltrative margins, or with an observed greater height than width when using a transverse view, were aspirated. Each nodule had one FNA with 3–5 passes of a needle performed by endocrinologists or radiologists and the nodules Papanicolaou stain. Nodules reported with atypical cells, atypia, or AUS were included. Follow-up management was performed based on the recommendations of TBSRTC (e.g., repeating FNA at appropriate intervals or a thyroidectomy if thyroid nodules with AUS were associated with clinical factors with an increased malignancy risk) [3,11] or the physicians’ judgment. Electronic medical records, such as ultrasonography, repeated FNAs, and surgical biopsy conducted on the same nodules until August 19, 2013, were reviewed. The microscopic examination and ultrasonographic reports of each nodule were matched and those in the histopathologic reports were indicated. In addition, demographic data, including age, sex, nodular size, presence of single nodularity on ultrasound, and TSH level, were documented for analysis. Patients with a previous diagnosis of thyroid cancer and those receiving antithyroid drugs or eltroxin were excluded from analysis because these medications may interfere with the TSH level. This study was approved by the Institutional Review Board of the Taichung Veterans General Hospital, Taiwan.

All numerical variables were assessed for normality using the Kolmogorov–Smirnov test. The results were presented as the median (25th quartile, 75th quartile, interquartile range), if they were not normally distributed. The associations between the result of the second AUS, categorical variables, and surgical malignancy rate were assessed using the two-tailed χ2 test or two-tailed Fisher’s exact test, when appropriate. The Mann–Whitney U test was used for determining the statistical significance of continuous variables. All statistical tests were 2-sided and assessed at the significance level of 0.05. 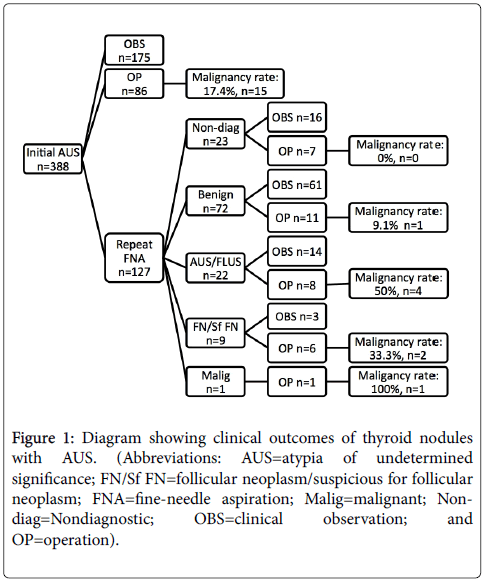 The results of Fisher’s exact test revealed that the malignancy rate in the 8 patients with consecutive AUS results (4 benign and 4 malignant) was marginally significantly (p=0.05) higher than that in 86 patients with initial AUS cases but without repeated FNAs (71 benign and 15 malignant).

To examine whether clinical characteristics, nodular size, and number of nodules were helpful in preoperative evaluation of AUS cases by using Chi-Square test, our study revealed no significant difference in sex, age, nodular size, single nodularity, and preoperative TSH levels between the benign and malignant groups (Table 1).

1One with concomitant papillary carcinoma and follicular carcinoma.

TBSRTC recommends repeat FNAs in AUS nodules with uncertain but assumed to be low malignancy rates (5%-15%) [3]. A previous study reported a lower risk of malignancy in indeterminate thyroid nodules in post-TBSRTC than pre-TBSRTC (13% vs. 35%), despite similar thyroidectomy rates (47% vs. 35%) [14]. Our cohort exhibited a similar thyroidectomy rate (30.7%), but up to 175 of 388 (45.1%) atypia cases received clinical observation only and 86 (22.2%) cases underwent operation directly without follow-up FNA. The clinicians at our institution might not be familiar with TBSRTC and therefore have been led to different clinical decisions. In our cohort, patients who were referred to repeated FNAs might have suspicious clinical presentations that resulted in higher malignancy rates of histopathology. Besides, unnecessary surgery should be avoided in this low malignancy risk group because thyroid operation may be complicated owing to postoperative thyroid hormone imbalance, hypoparathyroidism, recurrent laryngeal nerve injury, bleeding, and infection [1,15]. Patients with thyroid FNAs yielding AUS may undergo thyroid surgery only in the presence of associated clinical factors that increase malignancy risk. All other AUS cases are best managed with repeated FNAs [3].

Demographic data revealed no clinical significance between benign and malignant nodules; this observation was consistent with the results of a previous more extensively reviewed study [24]. Thus, a more effective diagnostic approach with fewer complications rather than clinical follow-up should be adopted for these patients to prevent a delayed diagnosis of malignant nodules. Recently, core-needle biopsy (CNB) has been proposed as a complementary test to FNA for evaluating thyroid nodules [25-27]. One study reported better sensitivity to malignancy and a lower inconclusive diagnosis rate of CNBs than repeated FNAs because of the greater numbers of cells obtained from CNBs [28]. However, CNBs have several limitations in clinical practice, such as not being feasible in some small nodules and requiring a prolonged training period, specific skills, and experiences in image-guided thyroid intervention. In addition, several immunocytochemical markers, including cytokeratin-19, galectin-13, Hector Battifora mesothelial-1, and genetic-expression classifiers have been used to improve cytological diagnostic accuracy, although meta-analytical results have revealed that preoperative applications of these molecular markers have not proved to have adequate sensitivity and specificity [29-32]. In this study, we did not perform CNBs or use immunohistochemistry preoperatively. Therefore, whether these technologies may help us manage thyroid nodules appropriately and avoid unnecessary operation and complication further investigation.

Our study was limited by the retrospective design and only 33% of the patients had histopathologic confirmation. The statistical significance of comparing the malignancy risk between repeated AUS and nonrepeated, single AUS cases was marginal. Further study should recruit a larger group of patients. In addition, these patients were reviewed at a single medical center. Therefore, whether our study results can be applied to the management of undetermined nodules in a clinical setting requires further investigation.

Repeated FNA can identify high-risk nodules in patients with AUS. The malignancy rate was higher in patients with repeated AUS than in those with AUS plus benign or in those with nonrepeated, single AUS. However, we could not determine particular clinical parameters for preoperatively differentiating between benign and malignant nodules among atypia cases. Multidisciplinary management along with advanced techniques, such as CNB and molecular markers, may be required for a more accurate preoperative diagnosis of these cytologically undetermined nodules.

Copyright: ©2016 Kuo YT, et al. This is an open-access article distributed under the terms of the Creative Commons Attribution License, which permits unrestricted use, distribution, and reproduction in any medium, provided the original author and source are credited. 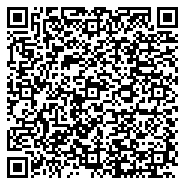