Objectives: The objective was to study if the difference exist in drug ototoxicity between less mature and mature guinea pigs.

Conclusion: We suggest that a difference in ototoxicity of certain otic drop treatments may exist between pediatric and adult patients.

Otic drops have been used worldwide for the treatment of acute and chronic otitis media. However, the possibility of ototoxicity when utilizing ear drops is always a concern of clinical otologists. In the past, we have examined the ototoxicity of commercially available ear drops [1] and disinfectants used within the middle ear cavity for treatment [2-4].

Ear drops containing acetic acid have been shown to have ototoxic effects, as reported in our previous studies [5,6].

The drug utilized in this study was acetic acid at a pH of 5.0. Acetic acid can be found at various concentrations in Burow’s solution (pH 3.5), Vo-Sol (pH 4.08), and other types of ear drop. A previous study in our laboratory indicated that acetic acid at a pH of 4.0 or less had strong ototoxicity when applied to the middle ear cavity of adult guinea pigs [5,6].

The animals were secured in a custom-made head holder and anesthetized with sodium pentobarbital (30 mg/kg). The surgical area was treated with Xylocaine (0.5%) prior to making the skin incision necessary for access to the middle ear cavity.

The bulla was exposed using a retroauricular incision. A small hole, about 2 mm in diameter, was made into the bulla using a dental drill. The round window membrane was visualized with a surgical microscope at a magnification of 40X.

The guinea pigs were stimulated with asynchronous tone bursts of 4 kHz and 8 kHz (1-ms rise and fall time, followed by a 10-ms plateau time) as well as click sounds. Stimuli were given at a pulse rate of 20 per sec, from 80 dB (re 20 μPa) to thresholds at 10 dB decrements. The speaker used was a Telephonics TDH-39P and the sound source was placed 10 cm from the auricle. The free field sound pressure was monitored and calibrated using a Bruel and Kjær 0.5 in condenser microphone.

After measurements were completed, the temporal bones were harvested for histopathologic study. Celloidin-embedded specimens were cut into 20 μm thick slices and histopathologic changes were evaluated.

A threshold response was defined as an N1-P1 signal with an amplitude of 10 μV. Change in the sound pressure level of dB measurements before and after drug application was defined as a change in hearing. The threshold changes before and after drug application were compared and a paired t-test was used to assess statistical significance. This protocol was approved by the Fukuoka University Animal Ethics Committee.

In the less mature animal group, a statistically significant elevation of the CAP threshold was noted for click sounds (P < 0.05) and for tone bursts of 4 kHz (P < 0.05) (Figure 2A and 2B). For tone bursts of 8 kHz, an elevation of the CAP threshold was noted in the less mature group, but was not statistically significant (Figure 2C). The CAP amplitude for click sounds and tone bursts of 4 kHz and 8 kHz at 60 dB, there was a statistically significant reduction in the less mature group (Figure 3A-3C). In the less mature animal group, both CAP thresholds and CAP amplitudes had greater sensitivity to the acetic acid treatment. To measure the amplitude, we utilized a sound pressure of 60 dB SPL. We specifically utilized this sound pressure because a sound pressure within this range yields a clear waveform, which improves the analysis of the amplitude. Figure 4 is a histopathology image taken from a less mature animal (body weight 200 g). After 30 min, no histopathologic finding was observed at the organ of Corti, stria vascularis, or where the spiral ganglion cells reside (Figure 4). The Figure 4 is the cross section of the cochlea at the basal turn. (Magnification×200).

With the exception of a previous study from our laboratory performed by Ichibangase et al. [2], no study has reported differences in the ototoxicty of ototopical drugs in experimental animals of varying levels of maturity. Age-dependent changes in susceptibility to ototoxic drugs were addressed by Prieve and Yanz [7]. This group injected kanamycin and bumetanide intravenously into 18 and 38-year-old mice. Their results indicated that younger of the two animal groups had a reduction in the CAP; however, this change was not observed in the older group. The authors postulated that the damage was due to the hair cells. Ichibangase et al. [2] studied the ototoxic effect of povidoneiodine, a topical drug, in guinea pigs ranging in age from an infant group (body weight: 100 ± 10 g), a young group (body weight 200 ± 20 g), to an adult group (body weight 400 ± 30 g). The authors reported that the age of the animals influenced the ototoxicity of this treatment.

The present study supports previous studies in that we found that less mature animals were more vulnerable to ototopically applied drugs than mature animals. We used a human testing system for CAP measurements. For the guinea pig, we used a relatively low frequency range (4–8 kHz). Furthermore, the click stimulus that we used stimulated the entire cochlea, meaning that comparisons of the CAP response for the click before and after drug application represent changes in total cochlear function. Certainly, higher-frequency testing may be more desirable. However, in our previous experiments, these tone ranges resulted in massive reductions in the CAP even as early as 10 min of the following: cortisporin, colimycin, Vo-Sol ear drops, or Povidone Scrub application on the round window [8-10]. Thus, indicating to us, that this is a reasonable range of frequencies to use in comparative evaluations. The two most common laboratory animals used for ototoxicity studies are the guinea pig and chinchilla. Both species have a round window that is vulnerably exposed in the middle ear cavity. This is unlike the human round window, which is deeply recessed in a narrow niche. Perhaps, more important is the difference in the thickness of the RWM between humans and rodents. The human membrane is approximately sixfold thicker and has a greater collagen density than the rodent membrane. Nomura et al. reported that a pseudo-membrane often drapes the human round window [11]. The above-mentioned anatomical differences could afford a greater barrier in humans to the passive diffusion of a drug from the middle ear to the inner ear. However, these results could also suggest that rodent models are a more sensitive sentinel model for ototoxicity, or perhaps, better represent pediatric rather than adult patients. Ear drops were given to infected ears in which the middle ear cavity was often filled with mucopurulent exudates. The round window membrane may be covered with fluids and the membrane itself may thicken due to mucosal edema. Thus, the membrane may offer an additional mechanical barrier. Experimental data in a chinchilla with otitis media showed decreased permeability of the RWM to horseradish peroxidase [12] and reduced ototoxic effects to cortisporin [13]. Sahni et al. [14] documented the increased thickness of the RWM in humans with various types of otitis media. Although our data are sound, it is of importance to proceed with caution when making human assumptions from animal data. 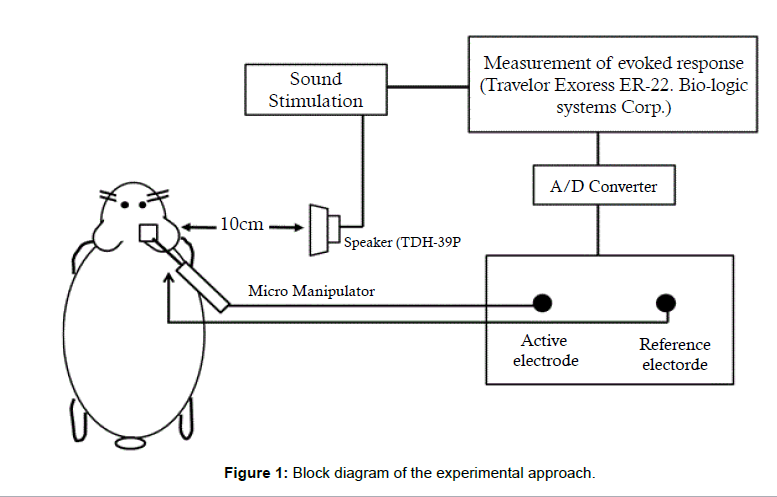 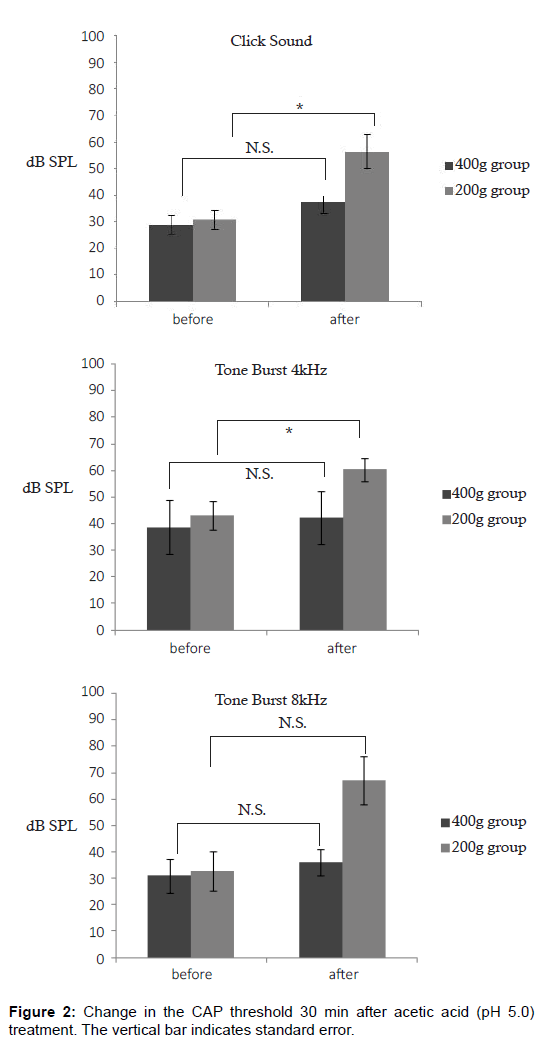 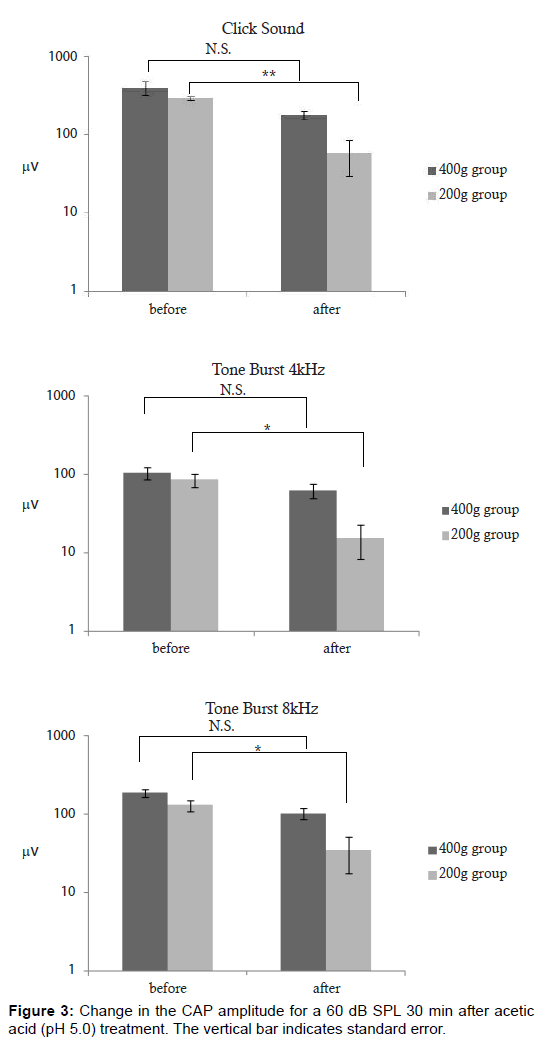 Figure 4: Histopathologic changes in the cochlea 30 min after acetic acid (pH 5.0) treatment. The histopathology was performed in a less mature animal (body weight 200 g). No significant pathology was observed. The cross section of the cochlea is at the basal turn. (Magnification×200).

The less mature animal group was more vulnerable to topically applied acetic acid than the mature animal group. From these data, we hypothesize that differences in ototoxicity may exist between adults and pediatric patients. Ear drops are frequently used for the treatment of intractable ear discharge such as otitis media and otomycosis. In conclusion, we advocate more caution when prescribing certain types of ear drops to pediatric compared to adult patients.