Sheep is often infected by various protozoan parasites that induce considerable losses of livestock resources. Scarce data have been reported to identify major parasites in sheep in Qena, Upper Egypt. Accordingly, the study aimed to estimate the prevalence of blood parasites infecting sheep in Qena. A field survey was conducted during the period between February 2014 and January 2015. Blood samples were collected from sheep and Giemsa-stained smears were prepared to identify blood parasites under microscopy. Out of 130 examined samples, 15 (11.53%) were infected with Babesia motasi (B. motasi); 13 (10.0%) infected with Babesia ovis (B. ovis) and 10 (7.69%) infected with Theileria ovis (Th. ovis) (single infection). Six (4.61%) hosts had mixed infections with B. motasi and Th. ovis; 3 (2.3%) with B. motasi and B. Ovis; 2 (1.53%) with B. Motasi, B. Ovis and Th. ovis and one (0.76%) was infected with Toxoplasma sp. and Th. Ovis. The total prevalence of infections with B. motasi, B. Ovis, Th. ovis and Toxoplasma sp. Were 20.0, 13.83, 14.6 and 0.76%, respectively. This study is the first report on the prevalence of blood parasites infecting sheep in Qena province. The infection with B. motasi was the most prevalent. Further investigations with more sensitive and applicable methods such as molecular methods to identify more blood protozoan parasites in sheep and other ruminants are needed.

Sheep is one of the most important domesticated animals in Egypt. The total population is exceeded 4 million heads and are raised mainly for meat production [1,2]. Their productivity is thought to be greatly reduced by haemoparasitic diseases that are the most destructive diseases affecting animal health and therefore obstacle the successful production.

Babesiosis and theileriosis are the most blood parasitic disease belonging to the complex of several tick-transmitted diseases with different causative agents. Indeed, such parasites are responsible for the high economic losses in sheep industry worldwide [3].

In sheep, toxoplasmosis is a common cause of infectious abortion resulting in significant economic losses. Therefore, the knowledge about the prevalence of such diseases in sheep is of interest to implement future strategies on public health programs. The present study was performed for the purpose of surveying blood parasite in sheep in Qena province, Upper Egypt, as a one of the key steps for control and health management of sheep through using successful treatment for certain parasites [4].

Blood samples were taken from the jugular vein of 130 (37males and 93 females) sheep in Qena, Upper Egypt and were untreated before with antiprotozoal drugs. Thin blood films were made on dry and clean slides, air dried in a clean place, and then they were fixed with absolute methyl alcohol for 1-3 minutes, stained with Giemsa [5]. Stain for 20 minutes and then examined under light microscopy at x100 oil immersion for protozoan blood parasites. Photographs were taken by using a digital photograph unit (Leica Microsystems, CH-9435 Heebrugg, Ec3, Singapore). 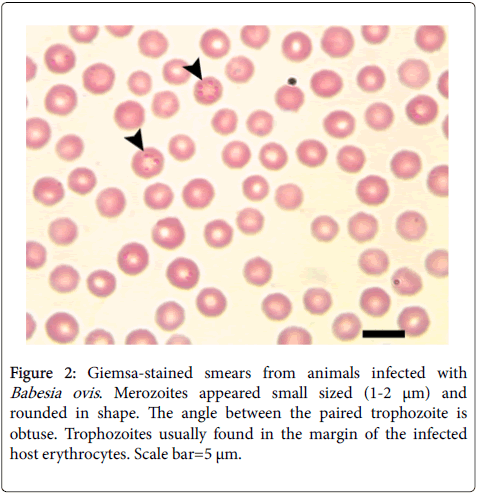 Figure 2: Giemsa-stained smears from animals infected with Babesia ovis. Merozoites appeared small sized (1-2 μm) and rounded in shape. The angle between the paired trophozoite is obtuse. Trophozoites usually found in the margin of the infected host erythrocytes. Scale bar=5 μm. Blood parasites are one of the major bands of sheep productivity in Egypt. In the current study, the overall of high prevalence of blood protozoan parasite in sheep was (38.46%) which indicated a very intense transmission within the sheep population. These results may reflect the actual pathway of blood protozoan parasites prevalence in the whole Upper Egypt region because of the close similarity of rearing systems. In the present investigation; the achieved results (38.46%) were nearly similar to the results obtained by Reda et al. in Egypt (39%) [6]. But on the contrary, Kandasamy et al. recorded a higher infection rate (87.0%) through using blood smear method [7]. Oppositely, Adamu et al. and Velusamy et al. revealed a lower prevalence rates (11.0% and 21.0%, respectively) [8,9]. The Variation in the prevalence rates of infection might be related to some factors as the climatic condition of the area of the study and lack of hygienic measure that enhances the life cycle of ticks and gives a higher chance to tick to infest animals as potential sources of infection and subsequently increasing the prevalence of blood parasites. Also, Variation may be due to the immunological status of animals and lack of the veterinary supervision who advice of giving medicine.

In Egypt, many researchers carry out studies on protozoan blood parasite of sheep. Our result recorded that 30% of examined sheep harbored Babesia. spp. Moreover it was not in the same line with other Egyptian studies were done by Mahmoud et al. and Ramadan et al. (8.5%) [10,11] and Reda et al. who recorded lower prevalence rate (23.1%, 8.5%, 17%) [6] respectively and in other countries by Rjeibi et al. (2.9%) in Tunisian also reported lower incidence of Babesia spp. [12]. Oppositely Ibrahim et al. (50.7%) in Egypt who recorded higher prevalence rate [13]. These difference in prevalence may be attributed to differences in climatic condition and sampling design as our study was not focused on flocks with known blood protozoan infection history but random selection were occurred.

Concerning Theileria sp. , it was revealed that only T. ovis was present in our study agreeing with that obtained by M’ghirbi et al. and Rjeibi et al. in Northern Tunisia [27,28]. The same results were reported by Altay et al. in Turkey [29]. Previous studies from northern Ethiopia have shown that the infection rate in sheep was 92.0% Gebrekidan et al. [30]. Rjeibi et al. recorded a lower prevalence (4.8%) [12]. Such discrepancy of the prevalence is related to the presence and abundance of tick species, genetic variation among sheep breeds in Egypt, the climatic conditions for the survival and transmission of tick and immunological status of animal

The current research showed that sheep was equally infected by Th. Ovis (14.6%) and B. ovis (13.84%). This was in a conflict with findings given by Nagore et al. who found that the sheep was infected with Th. Ovis (18.0%) more than B. ovis (2.5%) [31] and Rjeibi et al. who revealed that sheep were more infected by Th. Ovis (16.3%) than B. ovis (7.8%) [12]. Oppositely, Rjeibi et al. showed that sheep were more infected with B. ovis (17.4%) than Th. Ovis (5.8%) [28]. the difference between the studies might be related to the similarity of tick density in the area of our study during the period of observation and the available population of sheep in the study region.

Concerning sex susceptibility to infection present work showed the highest prevalence of blood protozoan infection was observed in female sheep than in males, and it was similar to the data obtained by Rjeibi et al. [12]. Such finding contradicted with the study done in Northern Tunisian by Rjeibi et al. who found no difference in the prevalence between both sexes [28], and Iqbal et al. in Pakistan who found that males were more infected than females [42]. This could explain by the fact that the majority of females are grazing outside whereas the males are kept indoors.

It has been concluded that the high haemoparasitic infection in sheep in Qena province, Upper Egypt mainly by B. motasi followed by Th. ovis. The proper usage of drugs, developing vaccines and the implementation of tick control on farms will facilitate controlling parasitic infections and reduce the economic losses in sheep production.

The authors declare no conflict of interests in relation to this work.

Copyright: © 2017 Hussein MN, et al. This is an open-access article distributed under the terms of the Creative Commons Attribution License, which permits unrestricted use, distribution, and reproduction in any medium, provided the original author and source are credited.