Shabir A Khanday1*, Arshid Jehangir1, A R Yousuf2 and Zafar A Reshi3

3Department of Botany, University of Kashmir, Jammu and Kashmir-190006, India

Copyright: © 2015 Khanday SA, et al. This is an open-access article distributed under the terms of the Creative Commons Attribution License, which permits unrestricted use, distribution, and reproduction in any medium, provided the original author and source are credited.

The distribution of rooted floating-leaf type macrophytes were studied in response to water depth in Manasbal Lake of Kashmir Himalaya. Seven aquatic plant species viz., Potamogeton natans, Trapa natans, Nelumbo nucifera, Nymphoides peltatum, Nymphaea alba, Hydrocharis dubia and Euryale ferox were observed along three different depth zones in the lake. The depth zones D1 (0-100 cm) and D2 (101-200 cm) were noticed to be suitable for the growth of macrophytes in terms of their community features while as less values of the same for plant species were observed at a depth range of 201-300 cm (D3). Thus, a certain effect was depicted by water depth on the community of rooted floating aquatic plant species, which could be used as a potential management strategy to control their infestation in the Lake ecosystem.

The most significant biotic constituent in a lake ecosystem is represented by macrophytes in their diverse forms. Macrophytes, because of their capacity to integrate environmental changes over periods of a few years, and reflect the cumulative effects of successive disturbances, are considered excellent indicators of the ecological state of water bodies [1]. Macrophytes are by far the most investigated group used for exploring the effects of water level fluctuation on biological organisms in aquatic ecosystems [2]. In lake ecosystems, the efforts mainly focus on the relationships between water level fluctuation and the presence, species richness, distribution and cover of macrophytes [3-5]. Water-level fluctuation generally affects macrophyte development in an indirect way through changes in a suite of variables like sediment characteristics, water clarity, wave exposure and current velocity [6].

Among macrophytes, relatively little research has been conducted on the response of floating-leaved macrophytes to water level fluctuations [7,8] than submerged and emergent groups [9,6]. This is in spite of the fact that the floating-leaved macrophytes, and more particularly nymphaeids, are often the dominant vegetation in a large range of water depths (0.5-3 m) [10,11], and play important roles in the functioning of aquatic ecosystems, such as high organic matter production [12], large accumulation and cycling of nutrients [13], and can serve as food, substrate and/or shelter for numerous other organisms [9].

Water depth, has been implicated in affecting the composition, diversity [14] and distribution [15,16] of macrophyte communities. Water depth can constrain plant growth by limiting the availability of resources particularly atmospheric carbon [17] and oxygen [18]. Thus, knowledge of how growth relates to water depth is valuable because even small changes in water depth can have significant effects on macrophyte communities, and this information is vital in understanding and predicting the responses of macrophytes to environmental management practices [19]. Thus, knowledge about responses of individual species to hydrological conditions may enable more efficient restoration or promote ecologically sensitive hydrological management. In this backdrop the present study was undertaken to assess how different community features of some macrophytes change with water level in a temperate freshwater lake ecosystem.

The lake Manasbal is the deepest fresh water Valley lake of Kashmir situated 32 km northwest of the Srinagar city, at an altitude of about 1585m (amsl) within the geographical co-ordinates of 34°14′40′- 34°15′22′N and 74°39′10′-74°41′20′E. The lake is oblong in outline covering an area of 2.80 km2 with the maximum depth of 12.5 m [20]. The lake has its own source of water in the form of underground springs spread all over its basin. An irrigation channel (Lar Kol) also contributes water to the lake, mainly during May-September. An outflow channel, called Nunnyar Nalla, from western side drains the excessive water out of the lake in to river Jhelum. The lake harbours a luxuriant growth of rooted floating leaf type macrophytes, especially Nelumbo nucifera provides a catchy look during August when its flowers are in full bloom. Four study sites were selected on the basis of depth and vegetation in the lake for studying the distributional pattern of the selected macrophytes (Figure 1). The community architectural features of the plant species were observed from April to November 2011. Quadrat method [21] was followed to study various community features of selected macrophyte species. A wooden quadrat frame of 1 m2 size was placed first in D1 (0- 100 cm) depth range followed by D2 (101-200 cm) and D3 (201-300 cm) depth zones at the four selected sampling sites in each lake covering the entire area of ecosystems. The depth was measured by a lead weight (1 kg) tied with a nylon rope having knots at each meter. One petiole/ shoot was considered as one plant except Nymphoides peltatum in which three petioles were taken as one plant [22]. The plants which occurred in each quadrat were sorted species wise and the number of individuals of each species was counted for various community features [21]. The frequency was determined by the ratio of number of quadrats in which species occurred to the number of quadrats studied, while as ratio of number of individuals of a species to the total number of quadrats deliberated was used to calculate the density. Similarly, the abundance of the various species was determined by the ratio of individuals of a species to the number of quadrats in which the species occur. 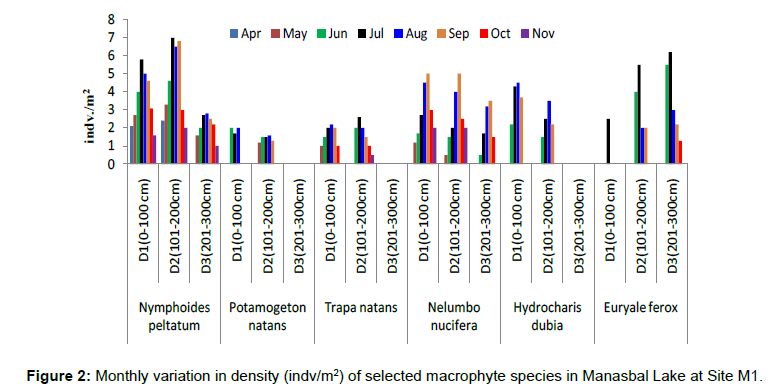 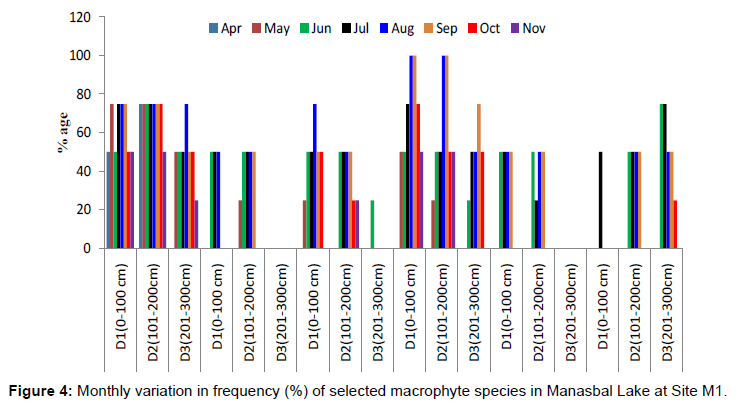 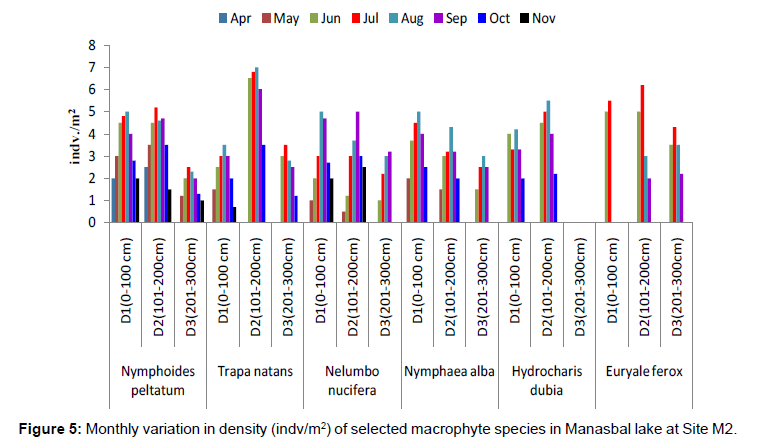 Figure 10: Monthly variation in frequency (%) of selected macrophyte species in Anchar Lake at Site A3. 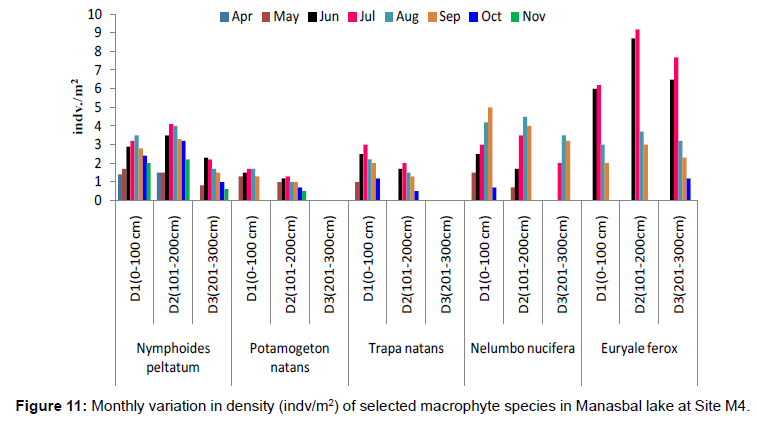 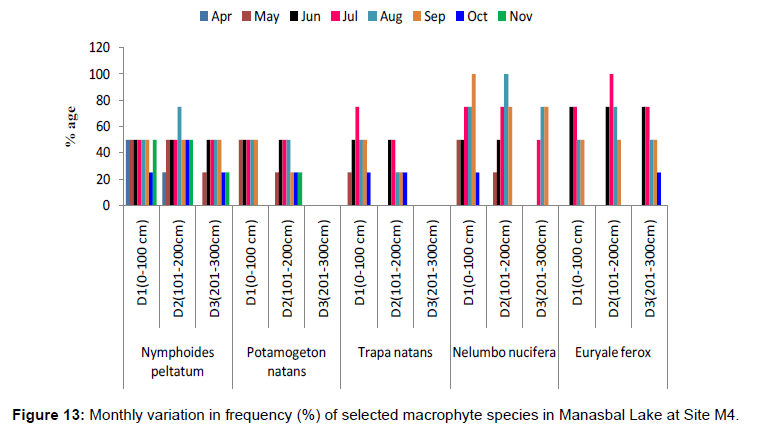 A perusal of data reveals that distribution of vegetation significantly depends on water depth of the Lake ecosystem. According to [23] disappearance of macrophytic vegetation from deeper parts of the lake results because of reduction of light, however it becomes copious towards shallow parts and causes strong inter-specific competition. Decreasing water depth increases species richness because of the presence of true aquatic plants as well as marsh and wet meadow species in shallower waters, representing appropriate conditions for all species groups [24]. This is perhaps a rationale for producing a montage vegetation appearance towards littoral parts of the lake by aquatic plant species.

The rooted floating macrophytes in the lake showed dominance in terms of density, abundance and frequency at D1 (0-100 cm) and D2 (101-200 cm) depth ranges. The exception to the above findings was the plant species, E ferox at Site M1, as it registered maximum values at depth D3 (201-300 cm) for community features. The reason being that local boatmen damage this plant species in its early vegetative phase at shallower depths, apprehending that the thorny petioles of the plant at its later stage of growth would cause them difficulty in extracting economically valuable rhizomes of Nelumbo nucifera. The highest depth range (201-300 cm) of the present lake ecosystem was observed to have a sparse distribution of rooted floating macrophyte species and away from this depth no such category of macrophyte was observed. The outcomes of our investigation are in consonance with the study of Keddy (2000). According to him, in lake gradients from shallow to deep water, emergent plant species dominate in shallow water, floating-leaf type macrophytes dominate deeper water, and submerged aquatics are found in the deepest water. These patterns are hypothesized to represent either competitive exclusion at the shallower edge and physical constraints at the deeper edge of each zone [25] or a trade-off between drought and flood tolerance [26,27] has argued that the trade-off zonation occur due to variation in biomass investment in lamina support where emergent plants allocate relatively more in petioles or stems that support laminae, while floating-leaved plant species invest comparatively less in petioles, which function as tethers rather than supports.

The influence of water depth on community architectural features of rooted floating macrophyte vegetation was assessed in Manasbal lake during the present study. The maximum density, frequency and abundance of plants were observed in the depth zone of 0-200 cm. The expansion of rooted aquatic species got severely hold up beyond 200 cm and were almost absent in the lake ecosystem above 300 cm water level. However, the plants in response to lower water depths were capable to obtain more light for photosynthesis and restore gas exchange quickly, resulting their highest presence. Thus, the data obtained during present assessment clearly indicates that an increase in water level affects the plant species in their distribution and could be used as a potential management strategy to control their infestation in the aquatic ecosystem.

The authors are thankful to Dr. Irfan Rashid, Asst. Professor Department of Earth Sciences for his help in preparing study area map.