Echinococcus Multilocularis Infestation in the Head of the Pancreas

Primary hydatid cyst of the pancreas is extremely rare, and occurs at a rate of 0.2-2% [1]. The causative agent is often Echinococcus granulosus (EG), which accounts for 99% of the cases. The hydatid disease caused by Echinococcus multilocularis (EM) is less frequent when compared with EG; however, the differentiation from neoplastic lesions poses a challenge [2-5]. We present a patient who underwent surgery with clinical diagnosis of a malignant tumor of the pancreases, and in whom serological tests and pathological examination revealed EM infection.

A 56-year-old female patient state the duration of pain, and the patient then underwent upper abdominal computerized tomography due to the finding of epigastric tenderness. The imaging of the abdomen revealed a 2 cm mass lesion localized in the head of the pancreas with moderate wall thickness, dense content, and hypodense appearance with peripheral enhancement in all imaging phases, and the patient underwent surgery with a provisional diagnosis of tumor.

The macroscopic examination revealed a 3.5x3.5x2.5 cm lesion in the head of the pancreas with irregular margins and patchy cystic appearance, but without a capsule. There were white-colored areas at the tumor periphery and yellow-brown-colored areas of bleeding and necrosis at the center of the lesion. The lesion was in contact with the pancreatic duct (Figure 1). Figure 1: Gross appearance of the lesion in the head of the pancreas with irregular margins and patchy microcystic appearance, which is in relation pancreatic duct (*).

The microscopic examination revealed necrotic debris in the lumen of the cystic areas and numerous acute and chronic inflammatory cellular elements including macrophages and multinucleated giant cells (Figure 2 a-d). The immunohistochemical examination showed strong cytoplasmic staining for CD68 (Figure 2e). Serial macroscopic sampling and multiple sections showed cuticular membrane fragments in two different areas (Figure 2 b, f and g). Based on these findings, the pathological diagnosis of EM infestation in the head of the pancreas was established. The pathological diagnosis was supported by serological tests. There was no evidence for involvement in other organ systems. 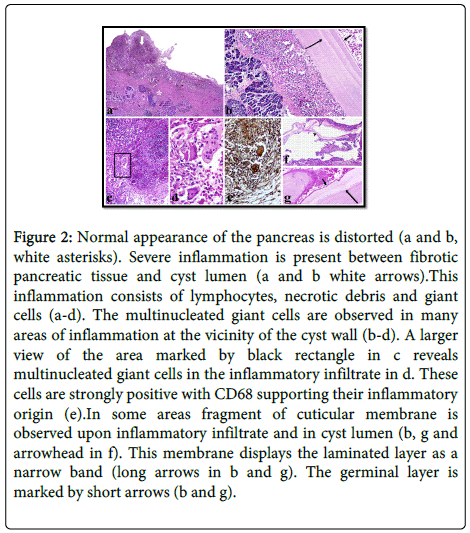 Figure 2: Normal appearance of the pancreas is distorted (a and b, white asterisks). Severe inflammation is present between fibrotic pancreatic tissue and cyst lumen (a and b white arrows).This inflammation consists of lymphocytes, necrotic debris and giant cells (a-d). The multinucleated giant cells are observed in many areas of inflammation at the vicinity of the cyst wall (b-d). A larger view of the area marked by black rectangle in c reveals multinucleated giant cells in the inflammatory infiltrate in d. These cells are strongly positive with CD68 supporting their inflammatory origin (e).In some areas fragment of cuticular membrane is observed upon inflammatory infiltrate and in cyst lumen (b, g and arrowhead in f). This membrane displays the laminated layer as a narrow band (long arrows in b and g). The germinal layer is marked by short arrows (b and g).

Although primary hydatid disease of the pancreas is an extremely rare clinical condition, it must be included in the differential diagnosis of pancreatic tumors with cystic components, particularly in regions endemic for the disease. In the differential diagnosis those lesions should take into consideration such as pancreatic pseudocysts, serous and mucinous cystic tumors, solid pseudopapillary tumors, intraductal papillary mucinous tumors, and osteoclast-like giant cell tumors. The differentiation from malignant lesions was not possible based on the imaging and macroscopic findings. Pseudocyst and osteoclast-like giant cell tumors were suspected at the initial assessment based on the presence of intense inflammatory cells on the cyst walls, lack of epithelium lining the cyst wall, and the presence of multinucleated giant cells. Multiple sampling from the lesion showing cuticular membrane ruled out these possible diagnoses. Furthermore, staining of giant cells with CD68, but negative staining pattern for vimentin ruled out osteoclast-like giant cell tumor. To our knowledge, the current case is the seventh patient in the literature reported to have EM infection on the head of the pancreas [2-6]. Despite the rare occurrence of EM infection, its' consideration in the differential diagnosis of pancreatic mass lesion is recommended due to the fact that it can mimic neoplastic lesions. Multiple sampling is essential to indicate the presence of a cuticular membrane.

Copyright: © 2014 Unal B, et al. This is an open-access article distributed under the terms of the Creative Commons Attribution License, which permits unrestricted use, distribution, and reproduction in any medium, provided the original author and source are credited.