Nanocrystalline ITO particles are prepared by Combustion Synthesis. Similarly, the structural and morphological properties for as prepared different ratio of powders to be 9:1 and 5:5 were found. Thermogravimetry analysis shows the liberation of O, H, N and metal particles with respective temperatures and loss of weight in mg. The structural, optical grain boundary and electrical studies due to variation of theoretical mobility’s with SEM analysis were discussed. The lattice constants were found to be 10.09 and 10.16 Å for different composition of powders. Here we present the preparation, Thermo gravimetric (TGA) analysis, structural studies, and morphological properties of ITO synthesized by decomposition of ITO by Sol-gel method.

Transparent conducting oxide (TCO) nanoparticles of tin, indium and zinc oxides (doped and undoped) have been extensively studied due to their high optical transmittance and electrical conductivity. These particles are useful in photovoltaic and photo thermal applications [1]. Unlike the more commonly used indium tin oxide, zinc oxide is a nontoxic, inexpensive and abundant material. It is chemically and thermally stable in hydrogen plasma processes which are commonly used for the production of solar cells. They are conducive to heat loss through convection, resulting in rapid reduction of product temperature. In other words, there would be a continual increase in the available active nano particle area. In addition to the energy regulation, visible color changes may be exploited architecturally, i.e. so called `fancy windows. ITO has been extensively studied due to its wide applications in industry as coating material for energy saving of Lamp, transparent electrode for watch, LCD and indication element for office equipment and automobile measuring instrument, and coating material for screen panel, and is expected to use as selectively permeable membrane and transparent conductive for solar cell.

In oxide materials properties particularly indium oxide and tinoxide its resulting agents, such as hydrogen, carbon monoxide, ammonia and hydrocarbon gases will react with chemi-adsorbed oxygen. The synthesis of nanostructured In2O3:SnO2 by combustion technique. The method is fast, and yields nanopowders with a fairly narrow particle size distribution. Recently, gel combustion routes using a variety of organic fuels like urea, hydrazine, citric acid and others have been reported to be promising methods to prepare a variety of oxides including nanocrystalline In2O3:SnO2. In a sense, indium doped with tin oxide powder can generate a lot of gases when burned. If such application is utilized in the synthesis of oxide powders, a great deal of gases can be released via the combusting reactants. This process will reinject the carrier and increase the sensor conductance. It is well known that the electrical conductivity in indium oxide is due to nonstoichiometric composition as a result of oxygen deficiency [2].

The Synthesis and characterization of nanostructured n-TCOs is a very important and well established field in nanotechnology and is still growing in stature. Therefore, the formation of nanocrystalline P-type counterpart may open up an extremely important and interesting field of research for the fabrication of all transparent nano active devices. This will not only give a new dimension in the field of ‘Transparent Electronics’ but new avenues may open up in the nanoparticles research keeping an eye on its tremendous applications in optoelectronics technology.

In2O3 is one of the most promising candidate’s for such tasks. It is a well known semi conducting oxide already used practically worldwide. When In2O3 is doped with Sn, a so called (ITO) is formed. High conductivity of ITO is attributed to the high carrier concentration which is caused by incorporation of Sn ions into In2O3 host lattice and oxygen nonstochiometry. ITO has a cubic bixybyite structure with the lattice parameter a=10.118 A°. Electrical conductivity (σ) for best quality ITO samples was found to be 104 S/cm2. The as prepared powder exhibited SnO2 as secondary phase whereas different temperature powdered particle showed single phase In2O3:SnO2 with high conductivity [3].

The optical properties of nanocrystalline semiconductors have been studied extensively in recent years. If the particle size of a semiconductor becomes comparable to the Bohr radius of the exciton, the ratio of surface atoms to those in the interior increases remarkably leading to the surface properties playing an important role in the properties of the material. Semiconducting nanoparticles also exhibit a change in their electronic properties relative to that of the bulk counterpart as the size of the solid becomes smaller, the band gap becomes larger. These quantum size effects have stimulated great interest in both basic and applied research [4].

In2O3–SnO2 powder were prepared with indium In (NO3)2.2H2O, ingots (>99.9%, Sisco research laboratory) and Sn(NO3)2.3H2O (98% Loba Chemie) as source material. A stock solution of indium In (NO3)2.2H2O, ingots (>99.9%, Sisco research laboratory) and Sn(NO3)2.3H2O (98% Loba Chemie). Solution was made by using this material so as to obtain a concentration of 0.5 M In3+. For the preparation of 90/10 and 50/50 In/Sn oxide powders, a calculated quantity of In (NO3)2.2H2O and Sn(NO3)2.3H2O was dissolved in the required amount of water. The volume ratio of the mixed salt solution/ organic solvent was 9:1 and 5:5. The doping concentration (0.05) M of Sn(NO3)2 obtained by stirring the In (NO3)2.2H2O with concentrated HNO3. The mixture was diluted with water and the resultant solution was stirred magnetically for 2 h. Urea was added to the above mixture till a gel of hydrated indium tin oxide appeared. It was stirred for additional 30 min at an ambient temperature. This gel form mixture is analyzed by thermal decomposition by TGA analysis and it was found confirmed that some hydrous salts are present on that mixture. This mode is characterized by slow and flameless reaction. Solution Combustion Synthesis used all over the world to prepare oxide materials for a variety of application. An oxide material prepared by rapidly heating aqueous solutions containing stoichiometric amounts of respective metal nitrate (oxidize) and fuels like urea [5].

In order to obtain one mole of tin nitrate 2 moles of Indium nitrate ψ moles of fuel are then added.

Adiabatic flame temperature Tf of the combustion reaction is:

ΔHf=Enthalpy of formation of the products or the reactants respectively.

γ=Molar number. The flame temperature was calculated as 855 K.

This formula shows that the flame temperature not only depends on the nature of the fuel but also on the fuel to nitrate ratio (depending on the value of ψ) [6].

Physical characterization of the powders

The full width half maximum of each peak is the width (in degrees) at half the maximum peak intensity. The FWHM of a peak can be related to the average crystallite size. An estimate of the average crystallite size, of the particle is made by Debye Scherer equation and FWHM of the XRD peaks for different orientations. The estimate excludes the effects of the peak broadening due to the instrument used and any effect of residual stresses in the ITO particle. The more predominant orientations are 222, 400, 440 and 622 in the ITO crystal. These estimated values are compared with the standard values given for the lattice constants of In2O3 (89-4598). A characteristic shift towards lower angle compared to reflexes of ideal crystal is always observed for all peaks. This indicates a systematic lattice expansion. This phenomenon has also been reported by many other authors and some of them have been summarized. Particles in the peripheral position exhibit generally broader peaks, indicating larger micro strain or smaller crystallite size and less pronounced 440 and 622 reflexes the values were tabulated in Table 1.

The results are similar to a previous investigation on the effect of sputter geometry on ITO films [5]. The analysis of crystal structure revealed that the detected peak of the nano particle was corresponding with that of crystallized ITO are shown in Figure 1. That is, very intense peak was found at the three most important peaks of In2O3 namely 222, 400, and 440 reflections. The peaks do not deviate from the PDF intensities, implying random non oriented arrangement of the ITO particles. The crystal size and its values were tabulated shown in Table 1. The major peaks due to SnO2 at 26.8° and SnO at 32° 2 theta were absent in the observed pattern, indicating complete misciplity of In and Sn in the proposed composition [6]. It is known that in ITO material, Sn is tetravalent each Sn4+ replacing In3+ substitutionally, thereby donating a free electron for the conductivity in the process shown in Table 2. So the ITO materials retain the cubic In2O3 structure up to the solid solubility limit of the SnO2 in In2O3 [7-9]. Porosity of the samples is nearly equal to one another and TGA analysis was carried out for the proportion of (9:1). Thermo gravimetric analysis (TGA) and Difference Thermo gravimetric Analysis (DTA) were simultaneously applied to the dried powder of the nanoparticle 2-3 mg with a computer controlled Instrument-SDT Q600 V8.3 Build 101. The thermal evolutions of the ITO powder particles were followed by Thermogravimetry (TG) and Different Thermal Analysis (DTA). TG measurements were carried out by taking 2.5430 mg of as-prepared In2O3:SnO2 (ITO) in a quartz pan to minimize bed effects during decomposition of the sample. The heating program was 30-1100°C and the heating rate was 20°C/min per min in air, and the purge gas employed was nitrogen, at a flow of 45 ml/min. The decomposition behavior of the sample is shown in Figure 2. It is observed that only 6.88% weight loss is noticed in the entire decomposition programme and the weight loss is due to chemidesorption of adsorbed water molecules during exposure of the sample to the atmosphere. The DSC analyses were carried out using a Shimadzu DSC-50 differential Scanning Calorimeter Thermal Analyzer. About 3 mg of ITO powdered particle was weighed very accurately in the aluminum DSC pan and placed in the DSC cell. It was heated from 0°C to 1000°C at a rate of 20°c/min under air atmosphere shown in Figure 2 and listed in Table 3 [10-13]. In support of TGA, simultaneous DTA was recorded in the same temperature range to confirm the decomposition steps. A chemidesorption of adsorbed species or a chemical decomposition is an endothermic process. It occurs by absorbing heat to raise the enthalpy of the system to a critical limit of its thermodynamic stability before it dissociates. 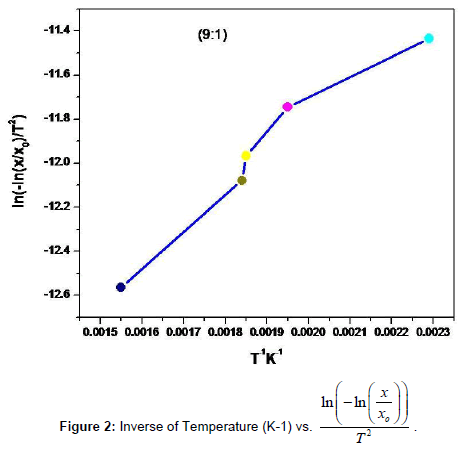 Table 3: Temperature in Kelvin Vs

Figure 3a and 3b shows the surface morphology of ITO powdered particles prepared at two different proportions of 9:1 and 5:5 at room temperature for 0.5 Molar solution concentrations observed. From these images it can be seen that the grain sizes of the powdered particles are not uniform. Therefore average grain sizes were estimated from different grains within the powder and to be about 0.8 μm to 2.5 μm. It is also seen that the edge texture of the particles become sharper and the grain boundaries become clearer by increasing the Sn content. It exhibits spherically shaped secondary particles consisting of primary nano spheres of approximately 0.8 μm to 2.5 μm [14]. The elemental analysis results were tabulated in Table 3, the two proportions of ITO 9:1 and 5:5 [15].

The size of the nano particle and the crystal size of the two different proportions were observed and its size lies in the very small range of 8-10 nm. The crystal size of 5:5 NPs are slightly smaller than the proportions of 9:1. The weight loss ratio of these proportions was entirely different and its value of 5:5 increased than 9:1. In our case the lattice parameter and dislocation densities were under the confinement regimes. This is due to the small crystal size of the prepared particles. Due to its agglomeration the particle size becomes larger in μm shown in its morphological studies of Scanning Electron Microscopy. The Elemental results analysis well matched with the calculated prepared molar ratio of the source materials.

Copyright: © 2017 Perumalsamy R, et al. This is an open-access article distributed under the terms of the Creative Commons Attribution License, which permits unrestricted use, distribution, and reproduction in any medium, provided the original author and source are credited. 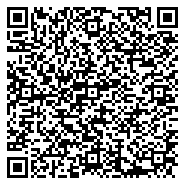 9th International Conference and Expo on Ceramics and Composite Materials