Effect of Manual Force on Lumbar Side Bending Range of Motion

Copyright: © 2015 Sato T. This is an open-access article distributed under the terms of the Creative Commons Attribution License, which permits unrestricted use, distribution, and reproduction in any medium, provided the original author and source are credited.

Objective: We evaluated the immediate changes in intervertebral motion after application of lumbar manual force.

Methods: Fifteen male volunteers (aged 26–43 years) with no history of significant low back pain were recruited to participate as a study group (manual traction). Control group (without manual traction) consisted of fifteen male volunteers who are matched with age (age 21-45 years). Consenting volunteers were referred for three radiographs (neutral position, right side bending position prior to manual force and right side bending position after manual force). The L3/4 segment was chosen for manual force, which was performed by a single examiner. Frontal angular rotation of each lumbar spine segment and total lumbar spinal motion were measured radio graphically before and after manual force by a single investigator (radiologist). Within-group differences were assessed with the paired t test.

Manual force such as Joint mobilization and manipulation has long been used for treatments of patients with mechanical spinal pain for several purposes [1-3]. One of the purposes of this treatment is to restore the segmental range of motion (ROM). Many studies have reported increased ROM or changes in mobility after manual force, [4-15] or in combination with other treatments [16-20].

In numerous studies reporting improved ROM following manual force, a cervical ROM goniometer or inclinometer was utilized to investigate changes in ROM [4-7,10,19,20]. However, these instruments usually indicate changes in the entire cervical or lumbar ROM. They do not always provide information regarding changes in the segmental ROM. Although the active ROM may be increased due to manual force, this increase may be due to motion in neighboring segments. Further, it was difficult to determine whether the segmental ROM improved from measurements of the active ROM test.

Furthermore, in several studies [6,7,20] showing an increased active ROM or changes in motion after applying manual force, posterioranterior (PA) mobilization has been used. PA mobilization is a technique involving the application of a vertical force over the spinous process of a given vertebra. It is used with the aim of reducing pain rather than improving ROM [7,21] PA mobilization may produce motion not only in the target segment but also in neighboring segments [16-28] However, no consistent motion pattern in neighboring segments caused by PA mobilization has been identified in these studies, although a consistent motion pattern may exist in the target segment.

Several studies [22-26] have described a restricted ROM during lumbar side bending at a certain level or levels in patients with low back pain. If restriction occurs due to decreased mobility of the intervertebral joint, manual force, called lumbar side bending mobilization may be effective in restoring the segmental ROM. Lumbar side bending mobilization focuses on mobilizing a specific segment using a finger block to produce a mechanical effect. To our knowledge, only our previous study has investigated segmental changes in the side bending ROM after treatment, which reported the possibility of specific effects of manual force on the lumbar segmental side bending ROM [29] However, it needs careful understanding for the result of the study due to several limitations.

The purpose of this study was to investigate immediate changes in total lumbar motion in addition to segmental ROM after manual force in asymptomatic subjects. We also compared changes in ROM between study group and control group.

Thirty male volunteers employed by Bizen hospital responded to an advertisement and were recruited for the present study. They are allocated at random into two groups (15 study group: mean age 33.5 ± 6.7 years, body mass index 22 ± 0.57 kg/m2; 15 control group: mean age 33.4 ± 6.8 years, body mass index 24 ± 1.24 kg/m2) . Subjects were eligible for this study if they had no history of significant low back pain and no history of lumbar surgery. Subjects were also excluded if they had a history of disease in low back such as osteoporosis. Although symptomatic patients tend to have a more restricted ROM than that of asymptomatic subjects [30], ROM in asymptomatic subjects may not have been unrestricted [22,31]. In addition, severe degenerative change in the periarticular tissue may be observed in symptomatic patients [32-34] Tarasevicius et al. reported that as osteoarthritis develops, the capsular elasticity decreases and capsular contracture increases [32]. Thus, treatments with manual force may be effective in alleviating joint degeneration and capsular contracture if degeneration is not severe. However, no change in joint mobility would occur with fibrotic capsules resistant to the force generated by treatment with manual force if degeneration is severe. Therefore, this study used asymptomatic subjects with possible restricted range of motion but who were still likely to respond to treatment. This study was approved by the Ethical Committee for Clinical Research of Bizen Hospital. All subjects were informed of the steps involved in the radiographic procedure and about the risk of radiation. All subjects provided their informed consent before the trial.

Manual force at the L3/4 segment was performed by a single examiner 1 with more than 10 years of experience with the technique. The technique used in this study was that one of the authors learned from post graduate seminar in University of St. Augustine for Health Sciences [35]. Subjects were placed in the prone position with the lumbar spine in a neutral position and a pillow under their abdomen for support. Standing on the left side of the subjects, the examiner applied pressure from the left to the right of the L3 spinous process with the left thumb in the spot indicated by the top clip (Figure 1). Blockage of the L3 spinous process from the left to the right focused the force between L3 and L4 and minimized the amount of force above L3. The therapist placed his right hand on the medial distal thigh of the subject’s left leg. Then left lumbar side bending was introduced through left hip abduction until the therapist’s right hand felt resistance, at which point the position was held for 3 s (Figure 2). Figure 2: Pressure from left to right of L3 for L3/4 treatment.

A KXO-50G generator (TOSHIBA, Tokyo, Japan) at the setting of 320 mA was used for radiological examinations. A medium kilovoltage (average 75kV) was used. The tube was centered on L3. The focal film distance for each exposure was 100 cm.

Subjects were placed in the prone position with their lumbar spine in a neutral position and a pillow under their abdomen for support. Subject’s upper torso was stabilized with the strap. After identification of the spinous processes of L3 and L4 via palpation, the examiner marked each by taping a paper clip to overlying skin (Figure 3). The clips placement were confirmed by radiograph, and corrected if erroneous, prior to implementing the intervention. Following, subjects were passively moved to the left side bending position through left hip abduction for the entire lumbar spine until movement of the L1/2 segment under the examiner’s left middle finger, which was positioned on the interspace between the spinous processes of L1 and L2. With the subject in this position, PA radiograph was taken. Then, subjects were randomly assigned to study group and control group. In the study group, the examiner performed manual force for L3/4 after subjects were placed in the prone position. We briefly summarize the method of manual force as we already explained. The examiner who stands on the left side of the subjects applied pressure from the left to the right of the L3 spinous process with the left thumb to minimize the amount of force above L3. Then left lumbar side bending was introduced through left hip abduction until the therapist’s right hand felt resistance. The frequency and duration of this technique was decided based on our clinical experience. Manual force was repeated three times. Three seconds of stretching was allowed each time. Then, subjects were repositioned back to the left side bending position, and postmanual force radiography was performed. In the control group, after subjects were repositioned back to the left side bending position on prone position, second radiography was performed. 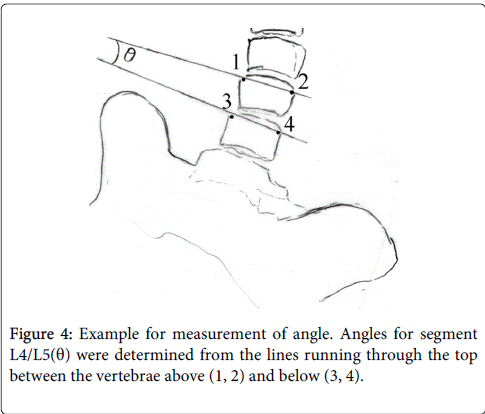 Figure 4: Example for measurement of angle. Angles for segment L4/L5(θ) were determined from the lines running through the top between the vertebrae above (1, 2) and below (3, 4).

Data were analyzed using the SPSS package, version 13.0 (SPSS Inc. Tokyo, Japan). The paired t-test was used to analyze differences in segmental rotation and whole lumbar side bending motion between pre- and post-manual force. Statistical significance was assumed at the 0.05 level. Although rarely reported, the technique used in this study has been applied to specific segments using the finger block technique to increase the segmental range of motion (ROM) of hypomobile segments [35]. The results of the current study may convey the idea that manual force for lumbar side bending can be used in hypomobile segments. However, to arrive at a satisfactory conclusion, subjects with hypomobile segments should be included in future studies. On the other hand, other techniques requiring manual force, such as PA mobilization, have frequently been used in previous studies [16,21] to increase motion not only in the target segment but also in neighboring segments:, thus, this technique should be considered nonspecific. Several studies16-18 have reported extension of the target segment and either flexion or extension of neighboring segments during PA mobilization. In addition, PA mobilization has often been used to reduce pain rather than improve ROM [6] The use of the finger block technique to improve ROM may have led to an increase in segmental range of motion after manual force, as used in this study. To the best of our knowledge, this is the first study to investigate the effects of a technique with manual force on the lumbar segmental side to increase ROM.

Table 2: Segmental side bending motion in normal and cadaveric specimens from the literature.

The current study has several limitations. First, this study had only men for considering radiation effect, which may affect the uniformity or homogeneity. Secondly, symptomatic subjects were not included. Including symptomatic subjects reflects patients with LBP treated in physical therapy. Future studies of changes in mobility after applying manual force should include subjects with current complaints of low back pain to verify the results of this study. Third, this study only concentrated on the immediate effects of manual force. Lastly, possible measurement error should be considered, although our data were comparable to those of previous studies.