Effectiveness of Two Types of Exercises before Classes on Inhibitory Function

Copyright: © Noriaki W, et al. This is an open-access article distributed under the terms of the Creative Commons Attribution License, which permits unrestricted use, distribution, and reproduction in any medium, provided the original author and source are credited.

The purpose of this study is to find an effective solution to the status quo, children cannot concentrate on the class and behave irrationally; they are emotionallyunstable and sometimes interrupt the class and even go away from the class. This is the case recently seen in the most primary schools in Japan. To solve this issue, the author, a teacher in a public primary school, found out an effective impact caused by the physical activities, called GO/NO-GO task, in order to investigate prefrontal cortex development in Japanese children through two types of exercises before classes. As a result, a faster response time and higher accuracy rate for GO/NO-GO tasks were observed. Based on this, since the accuracy rate after the two types of exercises in this study were significantly higher than those after the control activity and reading, it is suggested that two types of exercises were effective in improving inhibitory function.

The increasing issue of problem behaviors in the classroom has been a topic of discussion in some countries. It has been reported that there are some problems such as truancy, bullying, collapse of classroom structure, and so on, among school children in Japan [1]. It has also been reported that recently, the number of children with Attention Deficit/Hyperactivity Disorder (ADHD) and Learning Disorders (LD) has been increasing [2]. However, the cause of these problems has not yet been found.

According to studies in sports science and the relevant pedagogy, doing exercise is often considered an effective method of relieving such behavioral problems in both adolescents and adults. Verret et al. [3] reported that a 10-week physical activity training program for children with ADHD improved their muscular capacities, motor skills, levels of information processing, and behavior in reports written by parents and teachers. Tantillo et al. [4] presented that the behavioralADHDtraits improved after exercise in children with ADHD. Niederer, Kriemler et al. [5] also suggested that preschool children with greater fitness levels and motor skills have increased spatial working memory and attention (mean age: 5.2 (± 0.6) years, girls: 49.4%).

As discussed above, it is apparent that exercise contributes to improved prefrontal cortex function in children. In contrast, it has also been found that some medications that have been advanced for ADHD help improve ADHD symptoms. In addition to the practice of preventive exercise, the intake of supplements with minimal side effects was found effective in preventing problem behaviors. Hirayama et al. [7] demonstrated that the prefrontal cortex function and mental index of children with ADHD who took 200 mg of phosphatidylserine a day for two months significantly improved.

However, rather than taking supplements and/or medications, it is assumed that alternative prevention, such as habitual physical exercise, could have sustainable positive effects on problem behaviors. We, as teachers in Japanese schools, face the harsh reality of children losing their concentration and not being able to sit calmly throughout an entire class. However, the author has realized that exercising before classes helps children concentrate on their studies in class for the whole day.

The purpose of this study was to verify the effect of two types of exercise in which children interact and have physical contact with each other before classes by using the GO/NO-GO tasks.

The subjects of the study were 34 healthy elementary school students (16 males and 18 females) in the fifth grade, with a mean age ranging between 10 and 11 years (SD = 0.29) in 2009, in Japan. The children and their parents gave written informed consent. In Japanese elementary schools, there is a morning meeting to take attendance, check the children’s health, and make announcements. It takes about 25 minutes. During the time of the morning meeting, all 34 subjects did one of four activities on one day every other week. The four activities were the morning meeting for the day of the first week (control), reading for the second week, exercise 1 for the third week and exercise 2 for the fourth week. Each activity took 25 minutes, and was conducted from 8:05 to 8:30, before the first class in the morning.

On the reading day, subjects read their favourite books in the classroom, which has recently become a widespread practice in Japanese elementary, junior high and high schools.

On the day for exercise 1, the 34 subjects were divided into two groups. One group stood on one side of an S-shaped territory drawn on the playground. The other group stood on the other side of the same territory. Hopping on one foot, they had to go to the territory of the opposing group and try to capture their treasure. This game is called “S-ken” (Figure 1). On the day of exercise 2, about 30 subjects lay on their stomachs on mats in the gym, and held hands with one another to form a circle. Then, the remaining four subjects played the role of “demon.” The goal of the demons was to break the circle by pulling on the legs of the subjects forming the circle. This game is called “Kabu” (Figure 2). The subjects can enjoy the two exercises, having interaction and physical contact with each other. After each activity, groups of six subjects at a time sat in separate booths in a special classroom and performed the GO/NO-GO task [8,9]. The other 28 subjects waited calmly in their classroom. The stimulus presentation was designed to light up inside a framed rectangle (2.5 cm × 3.7 cm) at the centre of the device.

In the reverse differentiation phase, the instructions were the opposite of those for the differentiation stage. The subjects were told to squeeze the rubber ball only in response to the yellow light being turned on, but not to squeeze when the red light was turned on.

Illumination of the red and yellow lights was the same as for the differentiation phase.

Figure 4 shows the response times for the GO/NO-GO task after each activity. 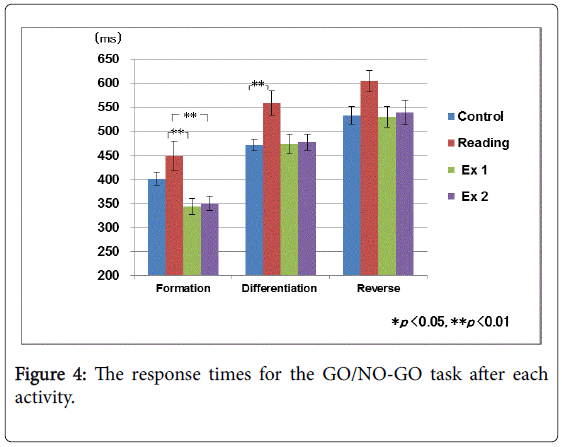 Figure 4: The response times for the GO/NO-GO task after each activity.

In the reverse differentiation phase, the average response time of 604.2 ms after reading was the slowest, followed by exercise 2, exercise 1, and the control activity. However, there was no significant difference in the response times after the four activities for this phase.

During the GO/NO-GO tasks in this study, subjects sometimes failed to squeeze the rubber ball when they should have squeezed it or mistakenly squeezed the ball when they should not have. The number of fails and mistakes were analysed using one-way ANOVA for the following nine cases in the differentiation and reverse differentiation phases. These analyses below were all conducted after each of the four activities. 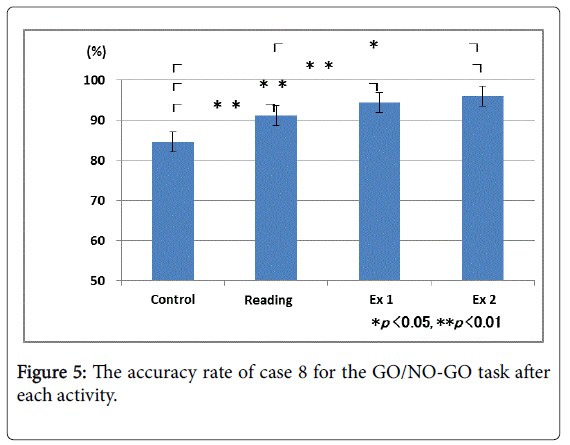 Figure 5: The accuracy rate of case 8 for the GO/NO-GO task after each activity. 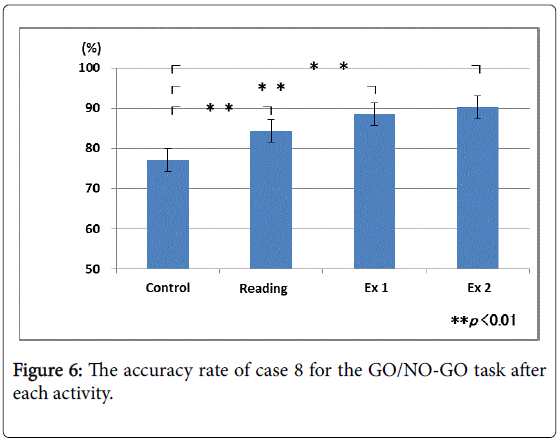 Figure 6: The accuracy rate of case 8 for the GO/NO-GO task after each activity. 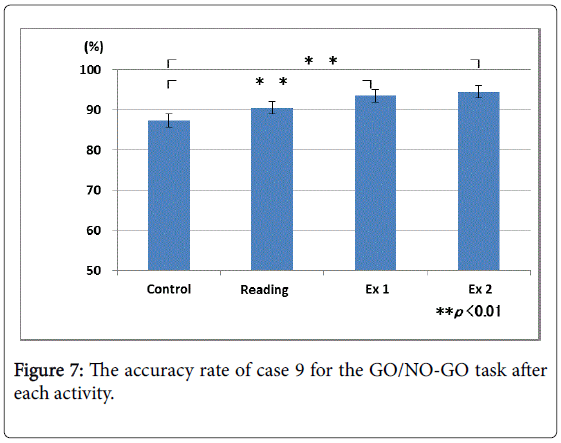 Figure 7: The accuracy rate of case 9 for the GO/NO-GO task after each activity.

The GO/NO-GO task originated in Pavlov’s conditioned reflex experiment, which used the sound of bells. Pavlov’s concept was developed into the GO/NO-GO task using a light stimulus. Luria et al. [11], who were cerebral physiologists, revealed that the function of the prefrontal cortex is deeply associated with the conditioned reflex. Given its historical background, the GO/NO-GO task is considered a discrimination task, and it is used to evaluate the function of disinhibition of the PFC (prefrontal cortex). Sasaki et al. [12] claimed that "no-go potential" was found in in the dorsolateral parts of frontal lobes in both contra- and ipsilateral hemispheres when human subjects were not supposed to squeeze a rubber ball in a GO/NO-GO task.

Moreover, Sawaguchi et al. [13] revealed that the dorsolateral PFC plays an important role in working memory. The function of working memory is to store a variety of information temporarily and to make final judgments. In addition, Fuster [14] claimed that the inhibitory function is carried out by collaboration between the orbitofrontal cortex, the prefrontal cortex, the basal ganglia, the thalamus and the hypothalamus.

During a GO/NO-GO task, attention control processes are required for both the initiation of action [15-17] and the inhibition of inappropriate responses [18,19]. Tamm [20] reported that the GO/NOGO task requires multiple executive functions including working memory, interference avoidance, and the withholding of responses that have been established as proponent response.

In the present study, the increased number of errors suggests that the PFC function involved in working memory may be immature [21,22]. Consistent with these previous studies, the present research has used a GO/NO-GO task to verify the effectiveness of two types of exercise over reading or the normal morning meeting (control). Subjects have interaction and physical contact with each other in both exercises.

Nakade et al. [23] and Murata et al. [24] reported in previous GO/NO-GO experiments that response times were reduced and the number of errors decreased when subjects walked an average of 7,000 steps per day for 10 months. It was also reported that when subjects continued this walking exercise for two years, response times became significantly faster and the number of errors significantly decreased.

According to previous studies, a faster response time and higher accuracy rate are considered good results for GO/NO-GO tasks. Based on this, since the accuracy rate after exercises 1 and 2 in this study were significantly higher than those after the control activity and reading, it is believed that exercises 1 and 2 were effective in improving inhibitory function. In the future, the author would like to conduct further research using various methods such as a profile of mood states (POMS), the Stroop Test and the Wisconsin Card Sorting Test to investigate the prefrontal cortex.