Introduction: Head and neck tumors patients present greater complaints due to their anatomical location. One of the most efficent treatment is radiotherapy, nevertheless it can cause undesired effects on area extending from the external to the internal ear. Aim: To evaluate hearing thresholds in subjects receiving radiotherapy as treatment for head and neck cancer. Methods: Transversal cohort study carried out in an Oncology Ward in a public hospital from the northeast of Brazil (Aracaju-Sergipe). Audiological evaluation was performed in 36 volunteers of both genders, divided equally between two groups: control and study group. The control group, non oncolgy, was composed by normal hearing thresholds subjects (including criteria). The study group was characterized of cancer patients, who were undergoing oncology treatment in a Cancer Department of the major public hospital of the town. The procedures, for both groups, were performed in two sections: anamnesis and conventinal pure tone audiometry. Results: Normal hearing thresholds of control and study group evinced that study group had worsening thresholds (p ≤ 0.05). Most of the study group (61.1%) was diagnosed with sensorineural hearing loss characterized by changes as from the 3 kHz frequency. Conclusion: Subjects with head and neck cancer undergoing oncology treatment might present significant worsening of hearing thresholds

Worldwide,head and neck tumors are the sixth most prevalent cancer types [1] and they correspond of 5% of all neoplasms. Head and neck cancer include tumors located on the skin and lips, oral cavity, nasal and paranasal sinuses, external auditory meatus, middle and inner ear. Due to the proximity of related areas to listening, speaking, swallowing and breathing, individuals exposed to cancer treatments for these tumors tend to have higher complaints [2].

Radiotherapy is most used in head and neck cancer and the longterm adverse effects has become increasingly recognized [3]. One of the side effects is hearing loss, which is characterized by changes in the Organ of Corti described in hair cells, cochlea, stria vascular and cochlear neurons. It´s important in radiation therapy protect the cochleo vestibular apparatus [4] once the literature reports changes in hearing thresholds. Most cases are sensorioneural type and first affect higher frequencies and may subsequently affect mid and low frequencies [5,6].

Radiotherapy ototoxic effect can be developed immediately, so the patient can have a middle ear disease due to the radiation as known as a conductive hearing loss; or ultimately, characterized by changes in Organ of Corti, specifically in outer hair cells, which can appear months or years after the treatment onset [3,6,7].

The major long-term side effect is hearing loss which can cause impacts on the patient’s quality of life. To improve patients` life it is essential monitoring hearing thresholds during the early diagnosis of cochlea damage [3,8]. So the objective of this research is to evaluate hearing thresholds in subjects receiving radiotherapy as treatment for head and neck cancer.

Transversal cohort study has been carried out at a Public Hospital in Aracaju, in the northeast of Brazil, approved by the Ethics and Research Committee under protocol #33665014.7.0000.5546. We recruited 36 subjects and after reading the written informed consent form, they agreed to undergo hearing tests.

Data collection was conducted from february to november of 2015 and all participants were conducted by a medical team. The sample was organized into two groups: Control and Study group and they were composed as long as they reached the eligibility criteria.

As the eligibility criteria for the control group, participants should present auditory thresholds within normal limits once the purpose of this group was to compare with normal study group´s hearing thresholds. The study group should have head and neck cancer diagnosis and be undergoing exclusively radiotherapy, in progress or in the final of therapeutic procedure.

We excluded from the study subjects within over 60 years of age (to avoid hearing loss by age); had had history of previous ear surgery; worked in a setting with noise exposure; had previous acoustic trauma; had received ototoxic medication prior to current treatment; had congenital syndromes; exhibited outer ear canal obstruction, metabolic disease and had previously received chemotherapy and/or radiotherapy. Especially for the study group we also excluded subjects if patients reported hearing complaints before oncology treatment. Moreover, they should have auditory thresholds within normal limits before starting treatment.

The radiotherapy dose prescribed by medical team varied according to the primary site of disease and staging of the primary tumor. Before the radiotherapy sessions, all study group subjects were submitted to conventional simulation (X-rays) to delimit the radiotherapy and a 2D radioterapy was performed. Data regarding cancer staging and treatment were collected from medical records.

Audiological procedure was conventional pure tone audiometry for all subjects of both groups and the evaluation was conducted in two public hospitals. Control group was evaluated at Sergipe´s University Hospital in Audiology Department. The study group was evaluated at the major Cancer Department public hospital in Aracaju, and oncology medical staff conducted them to have their hearing evaluated. All exams, in spite of being done in two different hospitals, were achieved with the same audiometer equipment and by the same researcher.

The anamnesis scheme was developed by researchers and included overall general health and hearing historic as acoustic trauma, middle ear disease, hearing complaints. Only for study group, anamnesis concerned history of cancer disease: time of disease discovery, cancer treatment, side effects as hearing complaints. All the procedure, as radioterapy treatment stage, was acquired in medical handbook.

Hearing thresholds by air conduction were surveyed by frequencies of 0.25 to 8 kHz and by bone conduction between 0.5 to 4 kHz frequencies. A hearing threshold higher or equal of 30 Db (HL) was considered significant for hearing impairment, so hearing threshold 0-29dB was defined as normal [9]. Measurements were taken using a pure tone-screening Interacoustics Audiometer Ad model 28 (Denmark) with TDH 39 ear phones, and the test was performed in an acoustic cabin. The speech recognition threshold survey was conducted to confirm the tonal findings.

Data was tabulated and processed by the software by the software Statistical Package for Social Sciences (SPSS) version [10]. For a description of data, tabular presentation of means, standard deviations, and percentages were used. Sample normality was verified using the Shapiro Wilk test. Normally distributed continuous variables were analyzed using the Student T test. Continuous variables that were not normally distributed were analyzed using the Mann-Whitney test. Either Chi-Square test was used to analyze crosstabs. Values were considered significant at p ≤ 0.05.

Estimates for head and neck cancer in Brazil show a higher evidence for males [10], therefore in the present study the gender was equivalent. In contrast of our study, the literature reports that male gender is the most affected [11,12]. Among the risk factors of head and neck cancer, are featured tobacco and alcohol, once the consumption of these drugs is more common in males. However, the literature reports that the percentage of adult smokers in Brazil has been showing a significant drop in the last decades due to the innumerable actions developed by the National Tobacco Control Policy. They emphasize that the number of smokers in the male population has declined in recent years [13].

We included only subjects undergoing radiation theraphy once we studied exclusively radiation effects in hearing. Radiotherapy is a treatment modality that consists of the use of electromagnetic or corpuscular ionizing energy. Electrons are displaced in cancer tissues, by ionization, cause chemical and biological effects, such as DNA damage, that prevent the replication of neoplastic cells. It acts directly on the tumors and stops their multiplication by mitosis and/or determine cell death [3,6,14]. The literature also evince that chemoradiotherapy improves patient survival [15,16], but our participants had advanced cases and medical team reported the radiation therapy as an efficient procedure in cancer treatment.

In order to perform conventional pure audiometry data analysis, ears were grouped together, since the variance analysis test showed no significant difference between ears (p ≥ 0.05).

38.9% of the study group with normal hearing thresholds was evaluated , and compared to control group thresholds (Table 1), the study evinced significant statistic difference betwen all frequencies except for 2 kHz with Mann Whitney test (p ≤ 0.05). Therefore, after the treatment began, 25% of study group reported worsening of auditory sensation, however statistically there is no significant difference (Chi-squared test p=0.61) with hearing loss diagnosis. It is known that transient fluctuations in hearing loss can occur, and permanent losses become clinically apparent after 06 months of treatment [17]. Furthemore, patients have lots of side effects as the classic early are xerostomia, loss of taste and dermatites. These effects are often readily apparent [18] and they can have a hearing handicap without hearing loss installation [19].

The study group (61.1%) was mostly diagnosed with sensorioneural hearing loss as from the frequency of 3 kHz worsening in 6 and 8 kHz (Figure 1). Cancer treatment has ototoxic effects that can damage hair cells, so it initially affects high frequencies, and it can also endanger low frequencies as a result of treatment exposure [3,5,14]. Literature reports an incidence of 26% and 85% of hearing loss, once 95% of hearing losses are sensorioneural [6]. Moreover, the present study was characterized of pure tone audiometry evaluation, despite being a conventional study, frequencies of the diagnosis of hearing loss were evident, as studies with high frequencies audiometry and otoacustic emissions [6,20,21]. 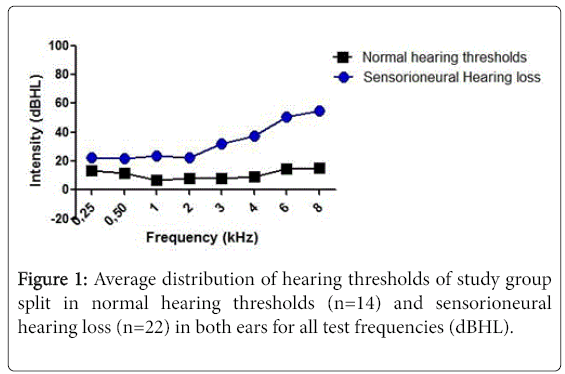 However it is worth emphasizing that men's habits are more associated with exposure to noise than women [22].

The probability of having sensorioneural hearing loss was signed by patients average age of 54,5 years (± 4.7), (Study T test p=0.000), so literature enphasizes more chance do develop hearing loss in patients above 45 years old [20].

Among hearing complains, tinnitus was proeminent in both groups: 44% of control group and 47.2% of study group, nevertheless, Pearson’s Chi-Square test showed no statistically significant difference betwen these two groups (p ≥ 0.05). Analysing the study group with hearing loss, 45.5% had tinnitus without significant difference (p ≥ 0.05). The literature agrees that tinnitus is a complaint cited by both normalhearing patients [23]. Despite of it, one study differs from ours, once they had reported that tinnitus as common complaint in hearing impairment cancer patients [24].

Hearing loss was diagnosed, regardless the stage of treatment. In the middle of the treatment, 59% had sensorioneural hearing loss and in the end of it, 41% had a hearing impairment (p ≥ 0.05). This finding demonstrates that hearing impairment in cancer treatment can occur at any stage of the therapeutic procedure, once it is influenced by the dose, type of chemical substance and individual susceptibility [25] (Figure 2). 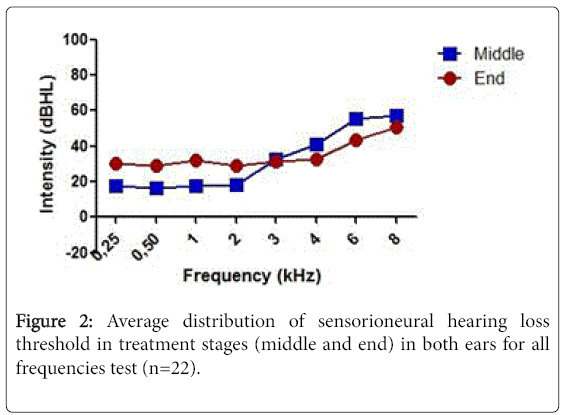 Figure 2: Average distribution of sensorioneural hearing loss threshold in treatment stages (middle and end) in both ears for all frequencies test (n=22).

Copyright: © 2017 de Oliveira PF, et al. This is an open-access article distributed under the terms of the Creative Commons Attribution License, which permits unrestricted use, distribution, and reproduction in any medium, provided the original author and source are credited.