Coral reefs are known as the most biologically diverse and productive ecosystem on the planet [1]. Massive bleaching of corals has been observed over the past two decades in different parts of the worlds’ ocean [2] and considered as the most serious threats for coral reefs [3]. It is caused by the disruption of the symbiotic interaction between the coral host and the symbiotic algae, Symbiodinium, inducing a massive expulsion of these symbionts or loss of their pigments occur [3-5]. This phenomenon can be linked to global climate change and increasing ocean temperatures [6].

Coral mortality following bleaching events provides space on the reef for rapid colonization by turf-forming algae [7], which compete with corals for space, and prevent coral recover. Macroalgae produces allelochemicals which can influence the growth, survival and reproduction of other organisms within their vicinity [8]. They are known to suppress the settlement and fitness of corals which is why coral reefs that are dominated by macroalgae can lead to further decline [9]. Results from previous studies showed that the coral-algal interaction have significant, species-specific, and negative effects on the growth and survival of corals [10]. The dominant scleractinian group, Acropora spp. is found to be the most strongly impacted by contact with allelopathic macroalgae [9]. It is also highlighted that the outcome of the macroalgalcoral competition can have significant implications on the growth of corals [10]. The presence of sea urchins can influence the community structure of habitats containing marine plants and algae populations [11]. They are usually found in areas abundant in algae. The collector sea urchin (Tripneustes gratilla ) is an herbivore widely found in tropical and subtropical areas [12]. Their abundance and distribution in coral reef areas suggest that they play an important role ecologically and are vital to the flow of matter and energy [13].

This section discusses the methods used in conducting the study and in collecting the data. The research experiment is divided into four phases: collection of the samples needed, exposure of the macroalgae to the coral fragments, exposure of the sea urchin to the macroalgalcoral setup and comparison of initial and final data of control and experimental setup.

The experimental set-up of this study was based on the study of Rasher and Hay [14] entitled chemically rich seaweeds poison corals when not controlled by herbivores. The set-up was established in Piagau Island, Brgy. La Paz, Nueva Valencia, Guimaras, Philippines. The metal cage has a total of ten units. Five units of coral and macroalgae were prepared in the cage for the control group. As for the treatment group, five units of coral, macroalgae, and sea urchin were prepared. Randomized Complete Block Design (RCBD) was used as the experimental design. In RCBD, replicates are separated randomly and each treatment has an equal probability of being assigned to a given experimental unit.

The researchers, with the assistance of professional divers, gathered bleached coral fragments of Acropora spp. found in Taklong Island National Marine Reserve, Guimaras, Philippines. These fragments are approximately the same length, five to six cm, for the standardization of the macroalgae-coral contact. It was collected using rubber gloves to avoid direct contact with the corals. The macroalgae were collected in Brgy. Lapaz, Nueva Valencia Guimaras having the same weight of five grams per unit. Lastly, the Tripneustes gratilla were collected in Brgy. Canhawan, Nueva Valencia, Guimaras with the assistance of authorized personnel. The researchers were assisted by experts in the field of identifying the organisms stated above to validate the identification of the organisms used in the study.

The branches were glued individually into cement cones with a diameter of 8 cm using an underwater epoxy. Marine epoxy was used because there are no recorded negative effects as coral adhesives and it is effective in attachment and transplant survival [15]. It is essential to plant the corals in order to simulate the natural conditions of the macroalgal-coral competition (Figure 1). Placement of corals in the caged racks

Exposure of D. dichotoma and Padina spp. to Acropora spp

Exposure of T. gratilla to the treatments

The T. gratilla were collected in Brgy. Canhawan, Nueva Valencia, Guimaras. Only one T. gratilla was exposed per unit. The exposure lasted for 14 days.

The FMI was measured using the photoQuad method. PhotoQuad method provides visual estimation but in a digital version. This method is usually used in coral monitoring programs in field surveys [16]. The remaining macroalgae attached to the rope were photographed. After taking a picture, the photo quadrat analysis software, photoQuad, quantified the FMI using the grid cell count option. A direct estimate of the species cover was automatically performed. The software offers a more versatile, quick and accurate result. The FMI of each unit was measured before and after the exposure T. gratilla for comparison.

Tripneustes gratilla were returned to its natural habitat, Acropora spp. were replanted around the area of Piagau Island, and the remaining Dictyota dichotoma and Padina spp were disposed. The metal cages were left in their original locations to serve as a fish nursery, as prescribed by the Department of Environment and Natural Resources.

There is a general reduction in percent coverage in all the experimental groups. Despite having a preference in consuming Padina sanctaecrucis compared to any other macroalgal species [17]. The presence of T. gratilla in post-coral bleached systems did not significantly reduce the macroalgal cover in comparison to the control group (Figure 2 and Table 1). Although, it can be observed that the FMI reduction percentage of the treatments, in general, were greater compared to that of the controls. There was only a comparable difference. Nevertheless, the compared FMI of the pre- and postexposure to the urchin showed a significant difference (Figure 3 and Table 2). This suggests that certain factors have probably affected the reduction of macroalgal cover of both experimental groups which has led to some discrepancies in the data acquired. 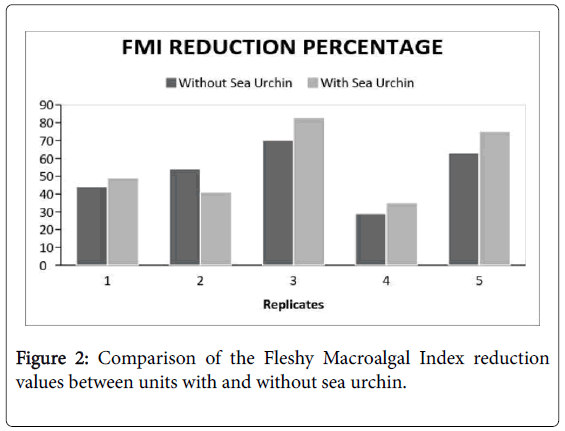 Figure 2: Comparison of the Fleshy Macroalgal Index reduction values between units with and without sea urchin.

Table 1: Computed t-value between units with and without sea urchin based on the FMI.

Table 2: Computed t-value and p-value between the pre- and postexposure FMI values. 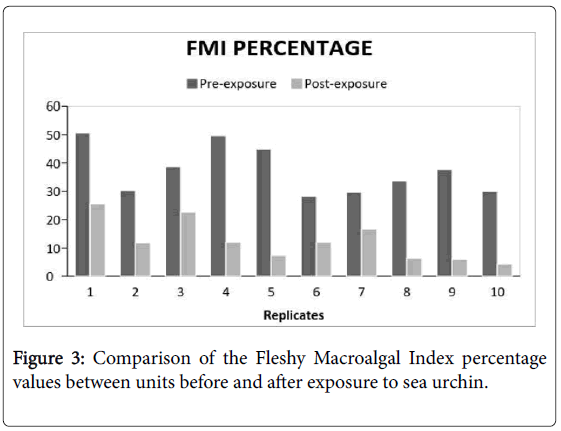 Figure 3: Comparison of the Fleshy Macroalgal Index percentage values between units before and after exposure to sea urchin.

First probable factor may be the failure to control all possible existence of extraneous variables, such as the presence of other organism inside the cages. The unwanted organisms found in the cage were school of juvenile reef fishes and sea cucumbers. The cages were intentionally designed to restrict the entrance of these organisms, yet their natural bio mechanisms have allowed their entrance. The presence of these organisms was beyond the control of the researchers. The small size of juvenile reef fishes and the capability of sea cucumbers (Synapta maculata ) to congest themselves have enabled them to penetrate the cages. It is possible that these organisms have consumed the macroalgae in each unit, since these organisms are known herbivores [18,19]. Second probable factor is the unstable weather conditions. In a study conducted by Sinnot [20], it concludes that water quality has a significant effect on the growth of macroalgae at certain levels. It has been shown that turbidity limits the capacity of macroalgae to photosynthesize and grow [21]. The varying parameters due to the unstable weather conditions during the data gathering might have greatly affected the macroalgal growth. Inconsistent environmental conditions could lower the metabolic rate [11]. Third, the weight of the sea urchin might also have affected the percentage reduced because of the varying capacity of consumption. Because of the variance in the weight and sizes of the sea urchin, the rate of consumption also differs. The smaller the size of the sea urchin corresponds to a higher ingestion rate of the organism [13]. Lastly, it may also be caused the deduction of replicates of both experimental groups due to the factors aforementioned. Originally, there were three cages, and each cage contains five replicates of each control and treatment groups, but due to these uncontrolled variables, some of the replicates have been contaminated. The researchers disregarded the contaminated units in order to avoid unreliable and inaccurate data.

The significant reduction of the macroalgae from pre- to postexposure may be attributed to the general herbivory of Tripneustes gratilla . Studies suggest that broad-spectrum preference and fast feeding mechanism can be utilized as a potential biocontrol agent, particularly to invasive macroalgae [17,22]. Given that the one of the main food preference of T. gratilla is a Padina sp. and it is also known to feed on Dictyota sp. , there is a higher possibility that this is the reason behind the obtained data.

A slight gain of colour in some of the corals was visually observed after the exposure to T. gratilla . The bleached structures of the corals when pre-exposed to the macroalgae turned to a faint brown colour. This suggests that there is a possible recovery from bleaching. However, in order for this statement to be verified, further studies need to be done. The corals which recovered were returned to their natural habitat for them to further recuperate.

The researchers would like to extend their utmost gratitude to the people who have made this study successful. To Sir Harold Mediodia, who has invested his precious time to share his expertise, the team would like to thank you. The researchers also appreciate the hard work of Maam Virna Navarro and Sir Angelo Olvido for providing us with absolute guidance and motivation. The team would also like to thank DENR-PENRO Guimaras, for without their assistance and support, this study would not be possible. To Manong Abeng and Manong Oca, the group expresses their gratitude for tirelessly running the pump boats to where the group intends to collect samples. To DARGuimaras, the team would like to acknowledge the efforts for providing transportation whenever it is needed. Without them, transactions with the municipality mayor, barangay captains, and other officials would not be accomplished. To the PSHS Staff, who, despite their busy schedule, allotted time to help with the construction of cages needed for the data collection, the team could not thank you enough. We would also like to thank the teams co-researchers, Jervin Dalisay, Marc Elizalde, Jimdel Mabaquiao, Mye Almarza, and Felix Suarez, who did not only offer aid during the data gathering, but also provided company and endless support, this study would not be remotely possible without them. And lastly, we would like to thank our parents for their love and encouragement throughout the duration of this study.

Copyright: © 2018 Dalabajan AKC, et al. This is an open-access article distributed under the terms of the Creative Commons Attribution License, which permits unrestricted use, distribution, and reproduction in any medium, provided the original author and source are credited.