The carbon steel-base metals were prepared in rectangular shape with size of the length (200mm); width (25mm) and thickness (1 and 2 mm). A pair of water cooled (4 litres per minutes) truncated type of electrodes (5 mm of diameter) was used to join these base metals as shown in figure 1[2]. A pair of test sample was initially placed on the top of lower electrode (tip) of the welder as overlaying 60mm on each other (lap joint) and then the initiating pedal was pressed. The heating process was started immediately after the squeezing cycles of pneumatic based electrode actuation is ended. The welding current was released then in accordance with the given preset values. Thereafter the electrode pressing mechanism consumed some time for cold work and eventually returned to the home position of upper electrode. These process controlling parameters (welding current, weld time and electrode pressing force) are set before the welding process starts based on the manufacturers of weld lobe. Table 1 lists the general description of copper based alloy-electrodes that used in this analysis. 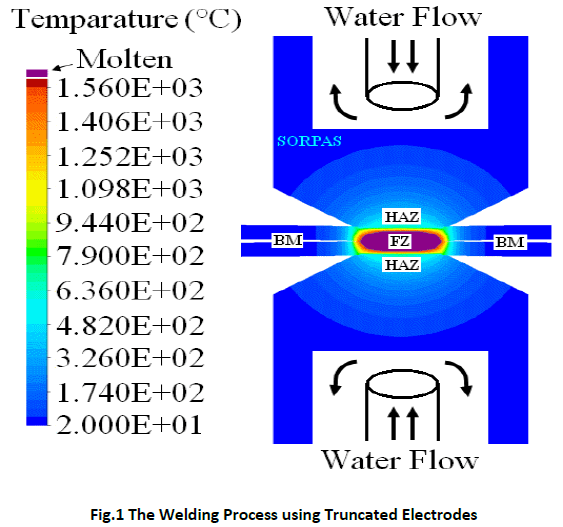 The geometry of the welded areas are firstly analysed for the micro indentation that produced by the electrodes during welding process [3]. It was found that the indentation increases as the process parameters increased. When the welding current, weld time and electrode pressing force were increased from 6kA; 10Cycle; 3kN to 8kA; 20cycle; 6kN, the indentations of the weld zones seemed to be increased proportionally and it has be graphically shown in figure 2. 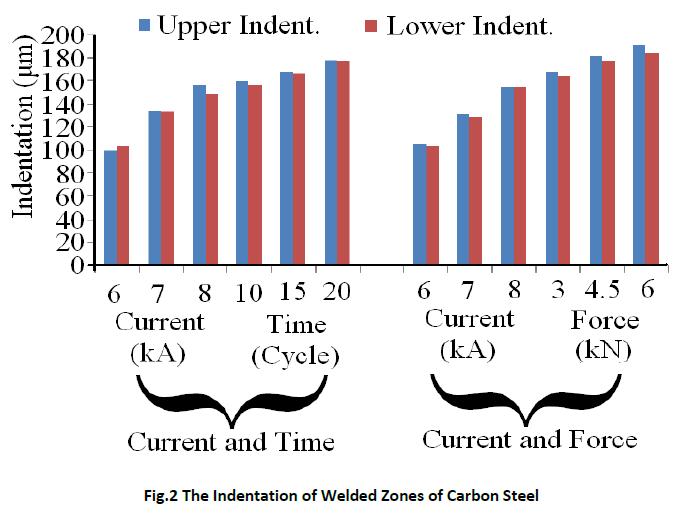 Figure 2: The Indentation of Welded Zones of Carbon Steel

The welded zones were analysed for the electrodes alignment and we found very few good welds using pneumatic based electrode actuation system. One of it is presented in figure 3. The upper and lower electrodes’ surfaces were properly placed during welding process so that a balanced weld nugget was noticed. The welded zone has rectagular-elliptical fusion zone(FZ), rectagular-elliptical heat affected zone (HAZ) and supporting base metals (BM) [4]. There was no side effect on the weld surfaces because the electrodes were very new at the time of welding [5]. There was another weld nugget which seemed to be a bit deformed due to imbalance of electrode placements. Figure 4 shows misaligned electrode placement after 400 hundreds of weld numbers. A symmetrical weld nugget was not seen as how we noticed in figure 3. This type of weld joint will lead to tear from one during tensile test [6]. Moreover the upper and lower electrode indentation seemed to be inconsistent and caused odd surfaces. These surfaces do exist; not only because of the misalignment but also the wear and tear effects of copper-chromium electrodes.

Figure 5 and 6 shows the misalignment of electrodes during welding process which lead to two different scenarios. Figure 5 shows the horizontal mismatch of electrodes so that the weld bead is slightly sloped whereas the figure 6 shows the vertical mismatch of electrodes at which the indentation seemed to be increased. It has to note here that the increase of indentation will affect the strength of weld zones. However poor weld nuggets will have the least indentation which is also not recommended as it affects the strength of weld zones too. Figure 7 shows a poor nugget growth due to lower process parameters set up during welding process. It shows very minimal electrode indentation that can be obtained for mild steels. 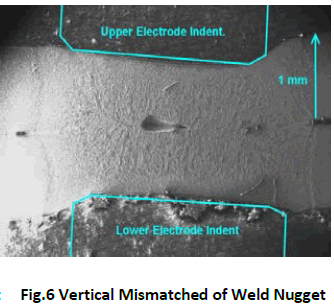 Initally the nugget geometry was formed according to the truncated type electrodes as shown in figure 9. Once it was dressed using electrode dresser after 200 numbers of weld attempts; the weld nuggets geometry became almost same as the dome type of electrodes weld (figure 10). A simulation and experimental results were presented in figure 9 and 10 for the truncated and dome types of electrodes’ welds, respectively.

The class two spot welding electrodes are made of copper and chromium according to the RWMA classification. It has two phase mixture of chromium and alpha copper. Basically the changes in properties happen at the rise of temperature due to the precipitation of chromium out of the solid solution [7,8]. This is what we have seen in the micro structural view of electrodes. As the numbers of welds are repeatedly welded,the mushrooming effects are growing due to heat exposure at the electrode tips’ areas (figure 11(b)). In this research the original electrode tip was 5mm of diameter and it was mushroomed to 6.123 mm after 400 weld attempts regardless of base metals. Another reading was taken at around 900 weld attempts and found to be 7.458 mm approximately (figure 11(b)). The musrooming effect was initially about 23% of the original diameter but increased to 49% when it was measured at 900 weld attempts. This is the proof that the mushrooming effects are altering the geometry of weld nugget due to the increase of diameter of electrode tips.

Having considered the mechanical and chemical changes that happened to the electrode after 900 numbers of welds; it was SEM-scanned for structural changes (figure 12). Table 1 list the chemical changes that recorded for three points named as A, B, and C. The point A was the electrode tip at which the base metals’ molten heat (≈1600° C) was directly exposed. The point B and C are the following places lead to the electrode holder which are exposed to the thermal expansions [9]. The EDX result shows that the carbon content is very high at the electrode tip as compared to other two regions. Moreover the chromium to copper ratio is also affected due to heat exposure as shown in table 1. The micro structural views show that the chromium precipitation is higher at the tip (point 1) resulting balanced dual phase alpha copper structure [10]. The fast cooling rate at point C due to water coolant inside the electrode prevents chromium precipitation and resulting imbalance dual phase alpha copper structure. The point B has balanced itself between point A and C. table 2: Chemical Distribution of The Electrode This paper looks into the weld zone geometry using carbon steel base metals for the electrode alignment and its mushrooming effects. The research has concluded that:

• The electrode indentation increases as the process parameters (current, time and force) are increased.

• The electrode alignment plays important role on the weld geometry regardless of thicknesses.

• Electrode dressing changes the weld pattern nuggets. In this experiment; it changes from truncated to dome type of weld zones.

• The initial weld processes up to 400 times increases the electrode tip diameter about 23%.

• The further weld processes up to 900 times increases the electrode tip diameter about 49%.

• The chemical and mechanical imbalances were noticed at the electrode after 900 numbers of welds.

I would like to thank Ministry of Science, Technology and Innovation, Malaysia (MOSTI) for their financial support during the experiment. This research is extension of my PhD research work at Nottingham University Malaysia Campus.