The topics of climate change and global warming have been discussed and investigated thoroughly. While both of them are naturally occurring phenomena, climate change is the average long-term changes in climate. Global warming, which is one of the causes of climate change is the increase in the temperature of the lower atmosphere due to the effects of greenhouse gases. Global warming occurs naturally in cycles throughout periods of time due to changes in the profile of the Earth path around the sun known as Milankovitch cycles, but the current episode of global warming is believed mostly to be man-made [1] because of the unprecedented increase in the concentration of greenhouse gases above the earth surface particularly due to the anthropogenic emissions of the industrial revolution, which had added substantial quantities of greenhouse gases (GHGs) to the atmosphere. GHGs like water vapor, carbon dioxide, methane, nitrous oxide, and other minor atmospheric gases absorb some of the outgoing infrared radiation (heat) reflected by the earth surface. The retained heat would accumulate and raise the lower atmosphere temperature [2]. The most important anthropogenic GHG is CO2, which is virtually considered responsible for causing the greenhouse impact [3]. Harmful effects of changes in precipitation and temperature is partly believed to be due to the GHGs mainly as a result of fossil fuel consumption such as coal, oil and natural gas in daily life activities, which is providing more than 85% of global energy needs [4], but at the same time extensive relying on fossil fuels increased the average atmospheric temperature by 0.8°C in the last 150 years [5]. To reduce CO2 concentration in the atmosphere, various technical options, such as adsorption [6], absorption [7], membrane separation [8] and cryogenic [9] have been proposed and investigated for the capture and sequestration of CO2. Because of low energy requirement, minimal effects on environment, and ease of applicability, adsorption is considered as one of the most capable techniques in the commercial and industrial applications [10]. Solid sorbents, like AC is one of the most auspicious options for post-combustion CO2 adsorption [11]. Porous AC is produced from a wide range of carbon-rich raw materials and biomass resources, which is considered renewable [12]. AC texture is adaptable as the surface functional groups trait and density as well as the pore size distribution can be adjusted to suit the application [13]. Microporous AC is superior adsorbent due to its high internal surface area, where most of the adsorption occurs, narrow pores, where the adsorption capacity is significantly improved, and the presence of chemically active sites, which are vital for the adsorption of specific groups [14]. It is well known that the ability of ACs to adsorb acidic gases will increase when there are nitrogen functional groups on its surface [15]. Modification of AC’s surface chemistry for gas and liquid adsorption by impregnation via slurry method are widely used, albeit surface area reduction and pore blockage are common occurring obstacles [16]. CO2 capture capacity by modified ACs was found to be improved due to the introduction of alkaline nitrogen groups on their surface [17]. Calcium acetate solution blocked the micropores of AC particles when they were impregnated onto AC samples reducing their surface area but in the same time enhancing CO2 adsorption by the basic sites formed on the AC surface [18]. Adsorption of CO2 on impregnated palm shell AC particles is limited in literatures [19] and the topic is even more limited on the dynamic CO2 adsorption onto palm shell AC particles. Industrial alkanol amine solutions used to absorb CO2 are; monoethanolamide (MEA), triethanolamine (DEA), N-mehyldiethanolamine (MDEA), piperazine (PZ) and 2-Amino- 2-methyl-1-propanol (AMP). MEA is considered the most effective among the other mentioned alkanol amines [20] because of its high reaction rate. Primary amine MEA is considered frugal [21] and has a higher absorption rate than other secondary, tertiary and sterically hindered amines in the order: MEA > AMP > DEA ≫ MDEA [20], but there are some shortcomings in using MEA and AMP as absorbents due to their corrosive behavior, moderate orderability and toxicity [21]. In the meantime, CO2 capture technologies available for carbon capture and sequestration (CCS) are pre-combustion, post-combustion and oxyfuel or oxy-combustion [22]. For the first and second systems as the name implies, CO2 is removed before or after a fuel is burned respectively, while the third system is using pure oxygen instead of air for combustion. Post-combustion CO2 capture is offering significant advantages over the other two systems due to its readiness to be used in many fossil fuel-fired power plants scattering around the world without the need to modify the combustion process and the other technologies involved, which is usually expensive and extensive [23].

In this work, fixed bed packed with granular AC particles, which are cost-effective adsorbent and its raw materials abundantly available in Southeast Asia particularly Malaysia [24], impregnated separately with primary (MEA) and sterically hindered (AMP) amines, was employed in a dynamic real time experiments to adsorb CO2 from gas mixture. Water was used as ecologically friendly medium to facilitate the impregnation of the amines. Dynamic breakthrough time plays major rule in this research as a tool for examining and evaluating the beds adsorption quality.

Analytical grade monoethanolamide and 2-amino-2-methyl-1- propanol were used in this study, as shown in Table 1.

Table 1: Chemical formulas and molecular weight of MEA and AMP.

MEA and AMP selection: MEA and AMP were selected among other amines because, MEA is considered as one of the most mature amine absorbents for CO2 absorption [25], and AMP due to its less energy requirement for regeneration than other amines [26].

Impregnation of AC samples: Impregnation was carried out by stirring 2 g of each MEA and AMP with 5 g of AC for 1 hour, 10 g of deionized water was added as an environmentally friendly medium to facilitate the impregnation process. The final slurry was dried at 70°C, under vacuum pressure (- 0.1 bar) for 6 hours. Loading efficiency was found to be 91% for both samples.

Adsorption of CO2: CO2 molecules were adsorbed onto a combination of solid state MEA and AMP impregnated separately on mostly micropore palm shell AC particles. Solid state amines employment was essential to minimize the harmful effects of liquid amines on environment and to curb their corrosive impacts and their degradation and the high energy required during regeneration [27]. Results in Figure 2 are showing the differences in breakthrough time for three adsorption beds at room temperature. Adsorption of CO2 molecules is considered concluded when the display of the CO2 monitor, which is connected to the outlet of the adsorption column, is showing that CO2 molecules start to exit the bed. These results were obtained using 5 g of each adsorbent, at room temperature and 10 ml/ min feed gas flow rate. 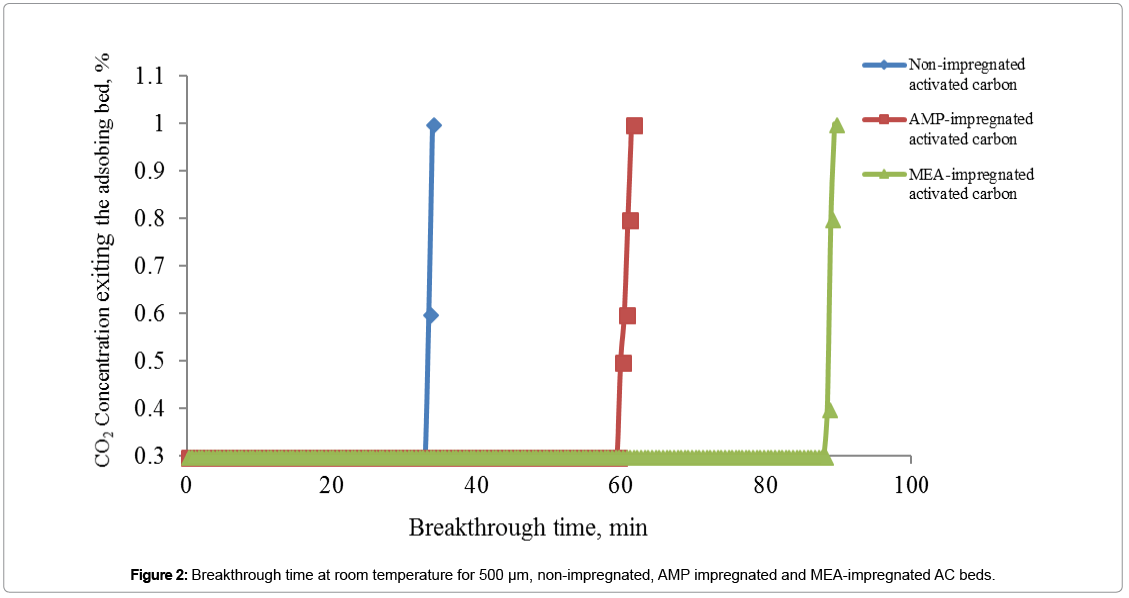 Experimental stoichiometric results showed that 0.6 mole of CO2 reacted with 1 g AMP, while 0.9 mole of CO2 reacted with 1 g MEA, an 50% increase in MEA capacity for CO2 adsorption. These results are inconsistent with the liquid amine theoretical stoichiometric, which states that at room temperature and pressure the maximum amount of CO2 reacting with unhindered amine (MEA) is 0.5 moles for each 1 mole of amine, and a maximum of 1 mole CO2 reacting with each 1 mole of sterically hindered amine (AMP) [30], which was confirmed by many researchers [31-33]. This inconsistency is occurring due to the absence of water. The outcome of CO2-AMP (hindered amine) reaction is unstable carbamate ions, which would be hydrolyzed to more stable bicarbonate ions and free amine [34]. The formation of free amine would enhance the AMP absorption capacity by facilitating more CO2 absorption, but in the absence of water no free amine would be formed hence reducing the adsorption capacity of AMP comparing to unhindered MEA, which when react with CO2 would form stable carbamate [30].

Standard classification of adsorption isotherms is showing in Figure 3. Class I is for adsorbents with a predominantly micropore adsorbents and class II is mostly for mesopore adsorbents, where the hysteresis loops appear as a common feature associated with the presence of mesoporosity due to the condensation of adsorbate molecules inside the mesopores [35]. Adsorption isotherm of non-impregnated 500 μm AC sample is showing in Figure 4, which is corresponding to type I isotherm. In micropores, the potential of both sides of the pore walls overlaps. This overlapping would enhance the adsorption capability of the adsorbent, where adsorption starts almost instantly when N2 molecules contact the AC particles [36]. In Figure 5, the adsorption isotherm of 500 μm AC sample impregnated with MEA is corresponding to type II isotherm. Figure 6 is showing the amount of N2 molecules, adsorbed onto the 500 μm AC particles impregnated with AMP, which is following the same trend as in Figure 5. Due to impregnation with amines, the total micropore volume of the AC particles decreased by 94% for both MEA-impregnated and AMP-impregnated AC beds comparing to nonimpregnated beds as shown in Table 5. 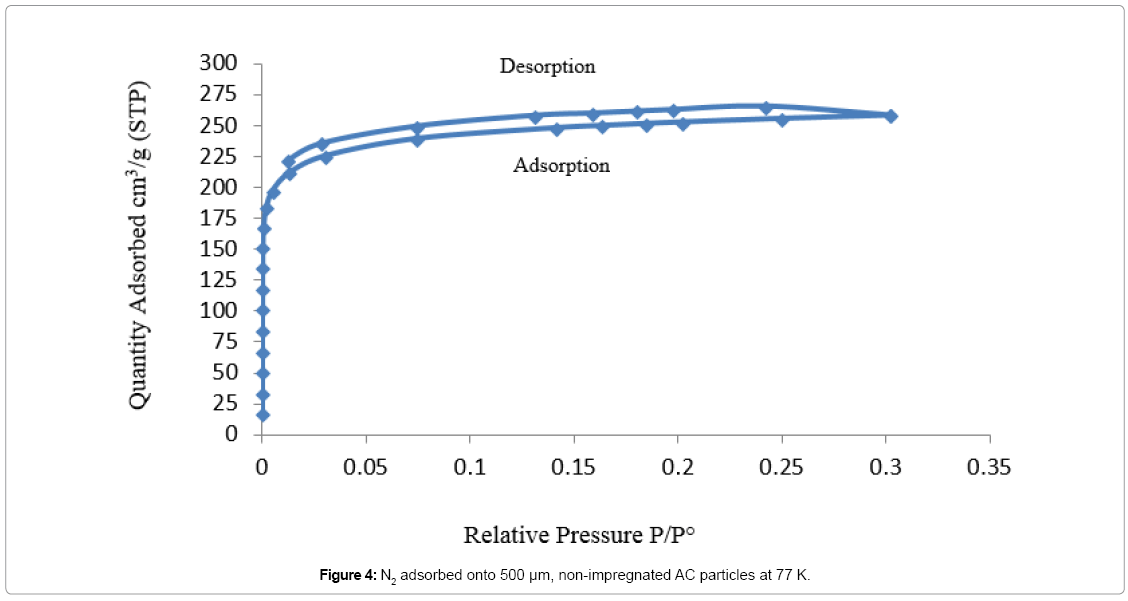 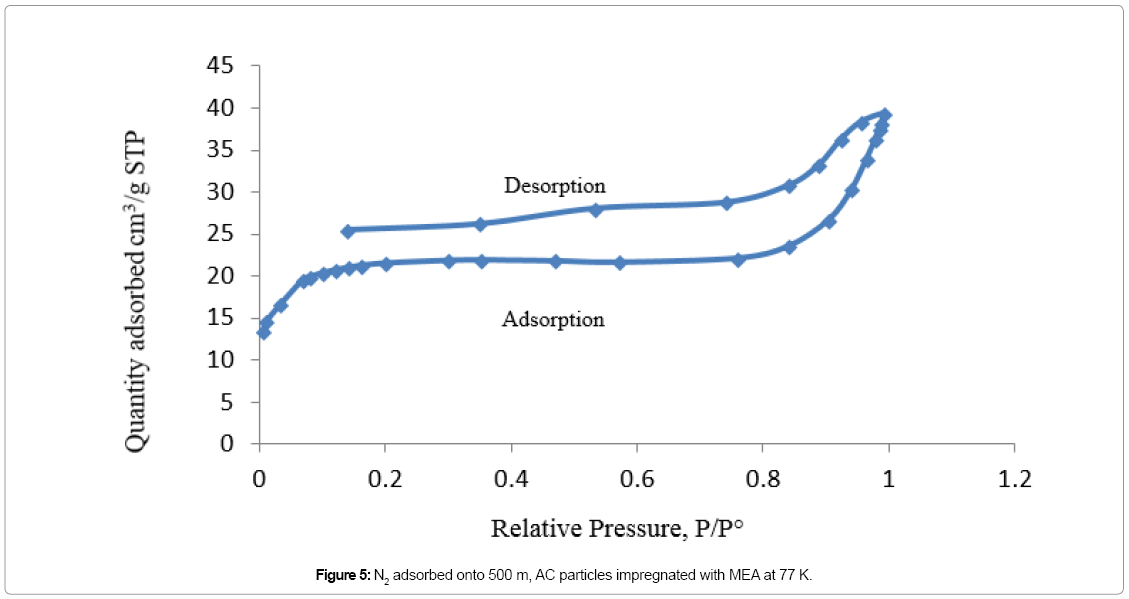 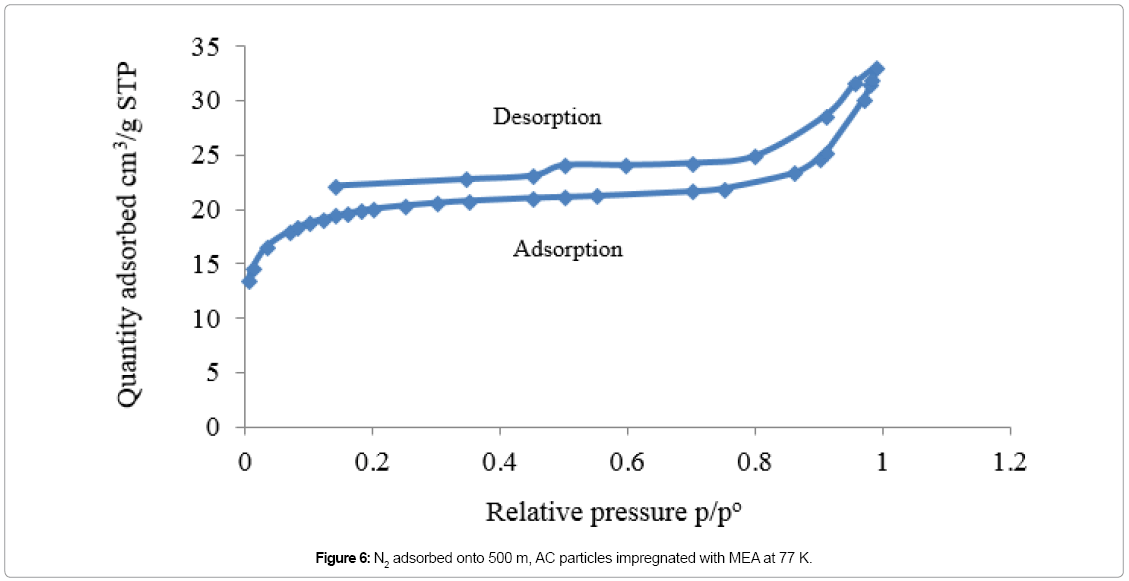 A linear regression was performed on (D-A) equation for nonimpregnated, MEA-impregnated and AMP-impregnated 500 μm AC samples from adsorption isotherms data obtained by ASAP 2020.

The adsorption potential defines as in equation 3:

P = Pressure in the gas phase.

The linearized form of equation 4 is as in equation 5:

Table 6: Results of exponent n and coefficient of determination (R2) for different samples. 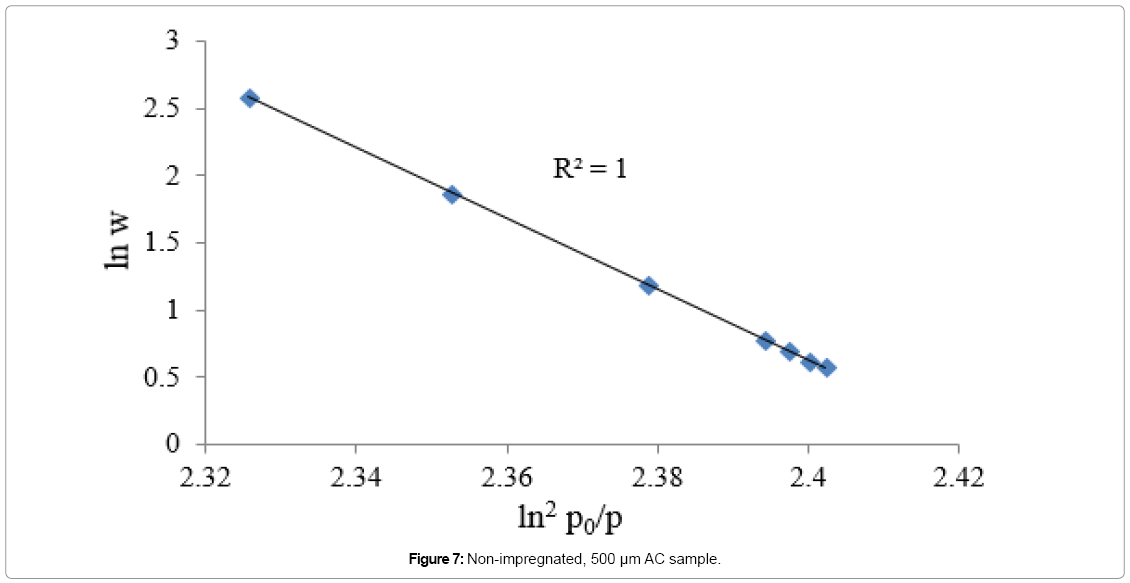 Thermal characterization of the AC beds

Adsorption is mostly exothermic process [40] since new bonds would be formed between the adsorbate and the adsorbent. Thermal probe connected to digital display was inserted inside the AC bed to record the temperature of adsorption. Experiments were performed on 5 g of each of non-impregnated, MEA and AMP-impregnated AC beds; feed gas flow rate was 10 ml/min at room temperature. During the adsorption experiments, non-impregnated AC bed showed slight increase in temperature due to the weak physisorption van der Waals attraction forces that formed between CO2 molecules and the nonimpregnated AC particles.

There was further increase in temperature for MEA and AMPimpregnated AC beds due to the establishment of chemical bond between CO2 molecules as weak acid anhydrite [41] and the MEA and AMP molecules as a weak base. Results are shown in Table 7.

Two cycles of regeneration were performed by sweeping the exhausted bed upward with 60 ml/min pure N2 at room temperature, for 4 hours. Regeneration in Table 8 was carried out at room temperature, results can be improved if heat was to be used. Heating would provide enough energy required to sever the N2-CO2 chemical bond. Results in Table 8, suggesting that AC beds impregnated with AMP were regenerated with reasonable reduction in breakthrough time especially for 500 μm beds.

Table 8: Reduction of breakthrough time of 500 μm AMP-impregnated AC before and after regeneration.

Table 9: Breakthrough time reduction of MEA-impregnated AC beds at room temperature before and after regeneration.

Table 10: Breakthrough time reduction in of MEA-impregnated AC beds, heated to at 75 ºC before and after regeneration.

Adsorption of CO2 by AC can be enhanced considerably by impregnation with MEA and AMP. Amine impregnation decreased the total micropore volume considerably but at the same time created enormous active sites to adsorb CO2 molecules. Dynamic breakthrough time of impregnated beds improved significantly comparing to nonimpregnated beds. An improvement of 44% in adsorption bed capacity for 500 μm, AC particles impregnated with MEA comparing to same size AC particles impregnated with AMP. Stoichiometric results are showing that solid amines and in the absence of water are reacting in contrary mode to what is a well-known behavior of liquid amines reaction with CO2.

Copyright: © 2018 Khalil SH. This is an open-access article distributed under the terms of the Creative Commons Attribution License, which permits unrestricted use, distribution, and reproduction in any medium, provided the original author and source are credited.