This research is carried out to utilize the opportunities to use the renewable energy i.e. solar energy for the research complex building at Allama Iqbal Open University, Islamabad, Pakistan. The main objective of the research is to save natural gas and utilize solar energy. The two geysers were installed, solar geyser hybrid with the natural gas geyser, another natural gas geyser (N.G) of the same load along with separated gas meter. Data has been collected from both hybrid and natural gas geysers for the period of one year i.e. Jan-Dec, 2013. The gas meter readings are then compared for both hybrid and natural gas geysers. The results show that, the behavior of linear increase and decrease is due to variation of load on the system as well as variation of solar insolation throughout the year. Load is maximum in winter and minimum in summer. The overall monthly average efficiency of the hybrid solar geyser is 62%. We conclude that a single family can save 62% of natural gas per year by using hybrid solar geyser. Furthermore solar geyser is very useful for the country. The Govt of Pakistan needs to aware the people.

Pakistan has large potential of renewable energy resources. Wind energy can produce up to 50,000 MW of power (AEDB). Solar insolation is sufficient for the generation of energy up to 1000 Watts per square meter in Pakistan (AEDB). Exploitation of Biomass, tidal and geothermal resources can also contribute towards the solution of energy crisis in Pakistan.

Solar energy is one of the cleanest energy resources that do not increase the global warming. The sun provides more energy in one second than the global energy demand [3]. The sun’s insolation in Pakistan is 5-7 kWh/m2/day which can provide 18-25 MJ/m2 energy per day [4-6]. Solar energy has great future potential but at present it is being used to generate less than 1% of total electricity supply [3]. With the awareness of the people and by adopting latest technology the solar energy can be used for power generation to solve the energy crisis in the country. The total energy requirement in Pakistan is about 62 MTOE. With 10% efficient solar energy converters and an area of 625 km2 energy of 60 MTOE can be generated [4].

In this paper testing of the performance of a hybrid solar geyser has been described. The study was carried out for the research complex building at Allama Iqbal Open University, Islamabad, Pakistan. A solar geyser has been hybridized with a gas geyser. Data (N1) will be collected for the hybrid and (N2) for the natural gas geyser in the form of gas meter readings. Then efficiency of the solar geyser will be determined for a period of one year and the saving of natural gas and cost will be calculated.

The solar geyser consists of 20 evacuated tubes and a storage tank of 200 liters capacity as shown in the Figure 1. The length of the tubes is 180 cm and the diameter is about 5 cm, therefore the cross section ‘A’ of the tubes is equal to 19.64 cm2 and the volume of water in each tube is 3535.2 cm3. The geyser is facing south and having an angle of approximately 45° from the horizontal to receive the maximum solar radiations during the day. Water was supplied to both the geyser systems from the main storage tank. The output of the solar geyser has been connected to the input of a gas geyser to achieve the hybridization, as shown in the Figure 2. A natural gas geyser with the same load and having a separate gas meter was also installed in the same building so as to compare the gas consumption in both the systems (Figure 3). Data is being collected twice a day for both the systems for the period of one year i.e. Jan-Dec, 2013. The temperature of the water in both systems is also being checked daily at 16:00 hours. Water level in the main storage tank is maintained for uninterrupted supply to the experimental systems. 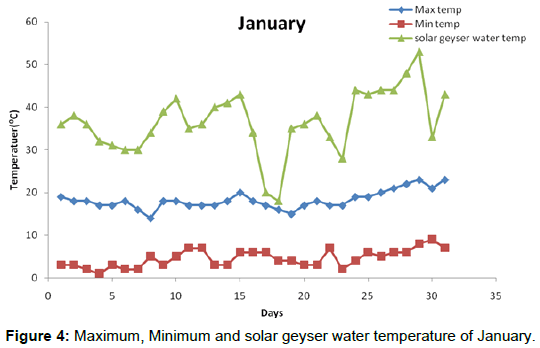 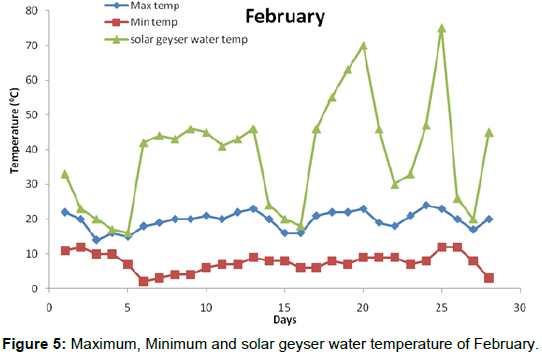 Figure 8: Maximum, Minimum and solar geyser water temperature of May. 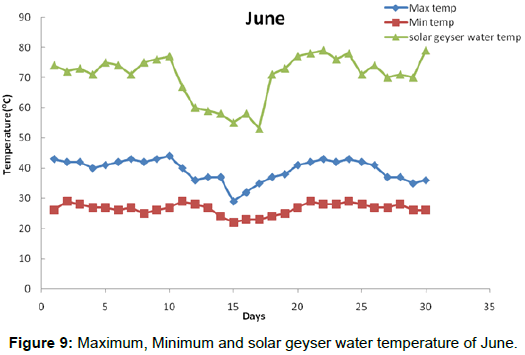 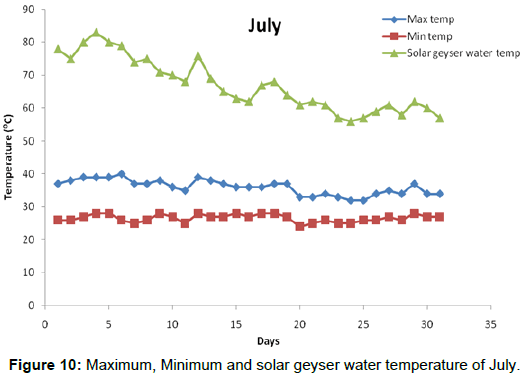 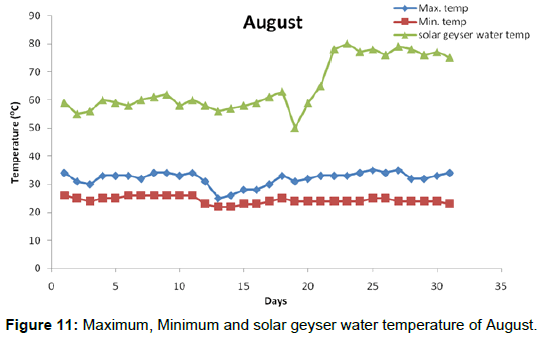 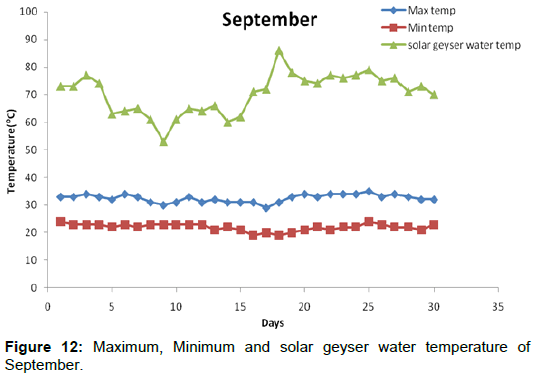 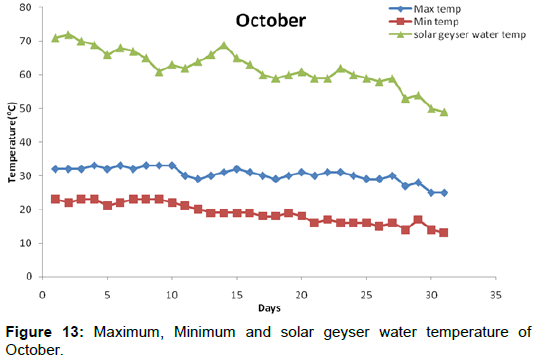 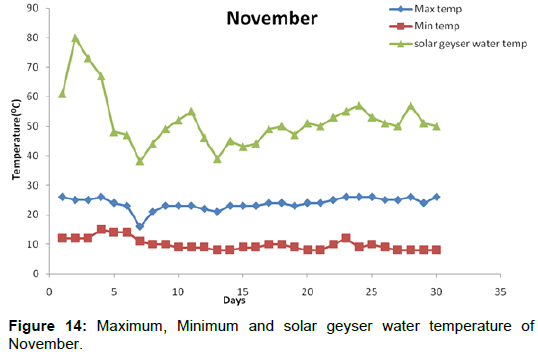 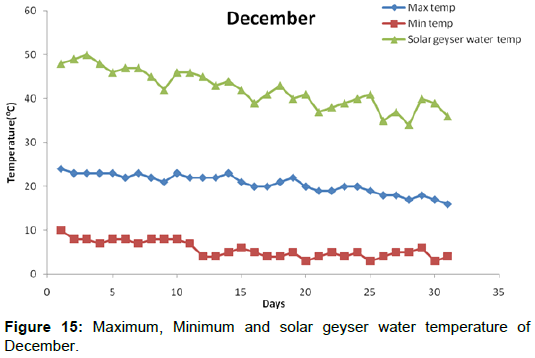 The average daily maximum, minimum and solar geyser water temperatures for the whole year 2013 are given in Table 1. 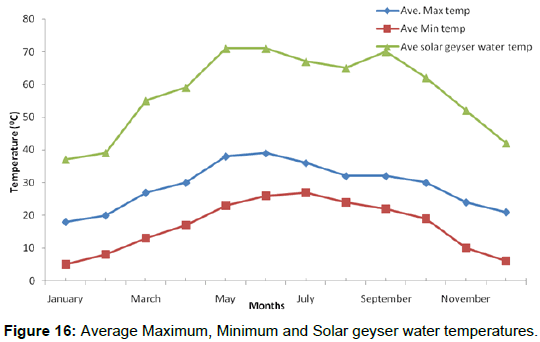 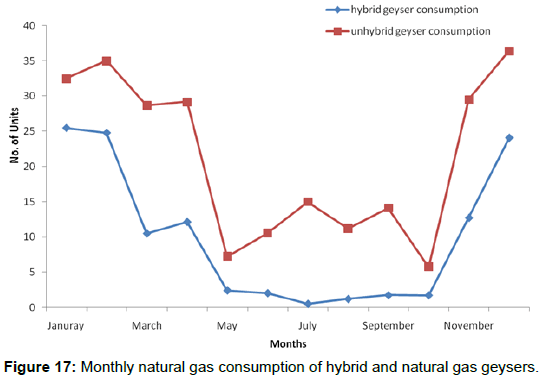 The natural gas saving efficiency of the solar geyser can be calculated using the formula:

N1 and N2 are the total number of gas units in m3 consumed each month throughout the year by the hybrid and natural gas geysers respectively. Corresponding efficiencies η are also shown for each month Table 3. 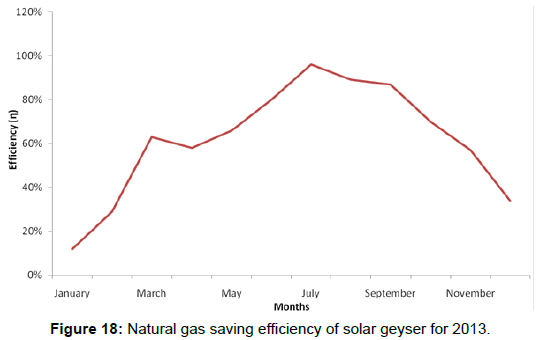 I would like to offer my sincerest compliments to my supervisor Prof. Dr. Syed Zafar Ilyas for their patience, guidance, motivation, immense knowledge and encouragement for the completion of this research work. I am thankful to Vice Chancellor, Allama Iqbal Open University, Islamabad for the financial support to complete this project. I am also grateful and acknowledge the services of all the faculty members and staff of the Department of Physics AIOU, Islamabad for their encouragement, support and guidance; without which completion of this work was impossible.

Copyright: © 2018 Ahmed H, et al. This is an open-access article distributed under the terms of the Creative Commons Attribution License, which permits unrestricted use, distribution, and reproduction in any medium, provided the original author and source are credited.