Electrognathographic Analysis of Jaw Movements during Speech: An Exploratory Study

Copyright: © 2016 de Carvalho KHT et al. This is an open-access article distributed under the terms of the Creative Commons Attribution License, which permits unrestricted use, distribution, and reproduction in any medium, provided the original author and source are credited.

The jaw movements that occur during word pronunciation have been studied by some authors [1,2], and it has been shown that the presence of pain can somehow change the activity of the muscles somehow [3-5], and significantly influence muscle function [5,6].

Various methods for measuring mandibular movement amplitude are used by clinicians and researchers. The most common is a ruler that is used to measure interincisal distance and laterality [18], but more recently modern equipment is used to analyze movements during oral functions, such as optoelectronics jaw tracking [4], magnetic jaw tracking [1] and electrognathography [2]. The electrognathography has been used for diagnosis of the TMD. It evaluates both antero-posterior and lateral mandibular movement. Furthermore, it measures the mandibular opening, the lateral deviation, the spontaneous movement and the relaxing habitual position of the mandible. It is mainly used for the objective analysis of the mandibular movement during speech describing the movement both in asymptomatic patients as well as in patients with TMD [2].

The purpose of this study was to compare the mandibular movement during speech of a temporomandibular disorder (TMD) group and an asymptomatic volunteers group by computerized electrognathography. The hypothesis was that the vertical amplitude, horizontal deviation and the velocity of jaw movements during word pronunciation would be lower in patients with TMD than in the volunteers (control group).

The study was approved by the Research Ethics Committee (Process 2008/01254) and was conducted according to the criteria of the National Health Council on research involving humans (Resolution 466). All participants provided a written consent and received all information about risks and benefits from the study. This was a quantitative and qualitative cross-sectional study.

Participants were recruited from a population of 95 patients from Temporomandibular Disorder Treatment Clinic of Dentistry School of Araçatuba. The Control group was recruited from 82 asymptomatic volunteers (control group). Volunteers and TMD patients were invited to participate and were examined through anamnesis and physical exam by one expert clinician.

The inclusion criteria were: a) presence of signs and symptoms of TMD, characterizing localized muscle pain (only for patient Group II); b) Angle Class I molar relationship (for both groups).

Tests: Both groups were submitted to a phonetic test in which they had to look at a list of recognizable figures and repeat uninterrupted. This test was used by Marchesan [20] and it contains all phonemes of the Brazilian Portuguese language combined in different position (Figure 1). The mandibular movement recorded during speech involved: maximum mandibular opening amplitude (mm), mandibular velocity during opening and closing (mm/sec) and maximum amplitude of lateral deviation to both right and left sides (mm). Figure 1: List of figures used in the phonetic test Marchesan [20].

The electrognathography equipment (BioEGN-BioPac system, Bio- Research associates, Inc., Milwaukee, WI) recorded the jaw movements during speech tests using the signal caption of a magnetic, localized at a centralized point in the inferior and anterior region of the inferior central incisor without interfering with dental relation. The magnet was fixed with a surgical adhesive of approximately 0.5 mm high and 0.7 mm width. The cephalostat is a head-positioning device from the electrognathography equipment that assures reproducibility between the mandible and the patient's head through sensors. It detects and records the signs emitted by the magnet without touching the patient’s face. The device was then connected to a compatible computer so the signs could be converted and the data collected for statistical analysis.

The electrognathography equipment was previously adjusted and calibrated and each patient initialized the test in the orthostatic position and with the mandible in the habitual intercuspal position. Mandibular movements were registered and represented by the bidimensional graphic that contained the trajectory and the movement amplitude both in frontal and horizontal planes (Figures 2A-2D). The data concerning to maximal opening, lateral deviation and open/close velocities were analyzed by means of “t” Student test (P< 0.05). Data were analyzed by Student "t" test, when Groups I and II were compared with each other; test "t" for unpaired samples was used. When opening and closing movements were compared within each group, it was applied was the "t" student for paired samples because this is a comparison in the same individuals.

Figure 3 shows the intensity of pain in anterior temporalis and masseter, based on RDC scale axis I (0-3 mm). It is demonstrated that GII has higher pain intensity than GI. 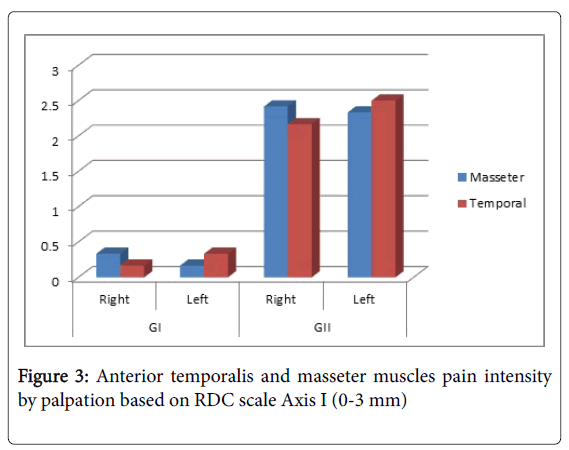 Regarding maximum mandibular velocity during opening and closing, there was no difference between groups (opening, p=0.2078; closing, p=0.6868). However, when “t” Paired Test was used to compare opening to closing movement velocity within each group, it was verified that symptomatic group presented a statistically slower velocity of the mandible during closing when compared to opening (mm/sec) (p=0.0490) (Table 4).

Advances in dental specialties collaborate in the improvement of diagnostic techniques. The mandibular movement analysis by computerized electrognathography is a technique that permits the evaluation of the mandibular movement at horizontal, frontal and sagittal plane and was used by some researchers [2]. Some authors suggest that TMD might impair mandibular movement and speech [2] and others, that the movement amplitude of condyle is the same for healthy individuals and patients with TMJ disease [21].

The present study aimed to evaluate the maximal opening in frontal plane, and maximal lateral amplitude (left and right) in horizontal plane in a group of patients with myogenic TMD and opening/closing mandibular velocity during speech and compare to a control group (asymptomatic individuals). The opening/closing velocity difference between groups was the only difference verified (p=0.0490), and it could be speculated that muscular TMD can alter closing movement, mainly in patients with pain predominantly in masseter muscles. Unlike the study from Bianchini, et al. [2], in this study, only patients with muscular TMD were evaluated and patients with articular pathologies were excluded. However, this difference in closing speed cannot be observed clinically but only with more sophisticated methods such as computerized electrognathography, as used in this study. It has been confirmed that painful muscles show adverse functional characteristics [22], and the presence of muscular pain can impair muscle contraction due to several mechanisms, mainly when co-contraction occurs [23]. In these cases, co-contraction does not prevent muscle contraction [23], but alter the velocity of the movement due to the action of the antagonists. Besides that, in the presence of pain, jaw movements are influenced by suppressor and stimulant inputs, depending on individual characteristics, and whether pain is chronic or acute [3]. It is also important to state that muscle activity can be re-organized in the presence of pain, and not necessarily be stimulated or inhibited [5].

What differentiates this study from previous studies [2] is the evaluation of patients with muscle pain only. Bianchini et al. [2] observed a decrease in amplitude of mouth opening in patients with muscular and articular TMD during speech. The relief of joint pain after treatment with laser increased the range of mouth opening measured during patient exam [24]. In this study, the decrease in range of motion was not observed between groups, what could be explained by the fact that the homogeneity of the group (DTM myogenic) or exclusion of articular TMD decreased the possibility of incorporating patients with major limitations movements or larger deviations in these same movements. We should also consider that the diagnosis of symptomatic group was local myalgia [23], and not patients with myofascial pain, miospasm or myositis. Thus, the limitations and deviations expected in the movements are less evident.

Pain in elevator muscles and during mouth opening is very common in TMD patients [25] and this pain can increase with mouth opening. This increased pain may change the opening amplitude of movement due to the action of the antagonist muscles, to adapt to pain [3].

The slower speed of the mandibular movement during speech and not of the range of motion in patients group may be due to the small range of movement during speech. Since the decrease in speed can result from inhibition by antagonists, or also by the patient's awareness that if the movement is fast, the pain may increase. The presence of local pain in the masticatory elevator muscles is more prevalent [25] and may inhibit this movement and the fear of pain can control the speed of movement.

Although Brandini, et al. [4] have not analyzed free mandibular movements during speech (phonetic) they found that the speed of the movements keeps relation to pain. In the present research work, the presence of pain (muscular) in the symptomatic group also affected the speed standard, when comparing the opening and closing mandibular movement. Although no statistical significant difference was observed, the amplitude in lateral deviation (deviation to the left and right) in the horizontal plane (mm) always presented greater scores for the symptomatic group, which may be due to muscular incoordination. Thus, it is assumed that muscle dysfunction may actually be responsible for maintaining or establishing a muscular incoordination, and that it could rather lead to deviations in analyzed movement [23]. One limitation of this study is the comparison among different individuals. It is necessary to develop longitudinal studies that compare patients before and after treatment.

Muscle disharmony can lead to various consequences to the individual, such as changes in the normal pattern of the jaw during speech, as in other functional movements performed during chewing, which is in line with several studies in the literature [2,12]. These authors also pointed out that restoring the functions of stomatognathic system as soon as possible is extremely important to its health, so that the consequences are not major and permanent long term complications [2,12,23].

Regarding to the mandible movements in frontal and horizontal planes as well as the mandible deviations, there was no difference between group I and group II (muscular TMD and asymptomatic).

There was a statistical difference for the maximum mandibular velocity during opening and closing during speech in symptomatic patients.