Hourly estimation of incoming shortwave radiation formulae have been developed and given by many scientists. The empirical formulae have to be updated with the latest realistic data. Using Lumb procedure, author attempted to give new regression coefficients for incoming shortwave radiation with in situ observations made during Arabian Sea Monsoon Experiment (ARMEX) cruises over North Indian Ocean for different cloud amounts (from clear sky to overcast conditions). ARMEX field work program has been conducted in June-August 2002 and March-June, 2003 on board R/V “Sagar Kanya”. The shortwave radiation data has been collected using the Albedometer, which is covering entire cloud amounts. Empirical formulae have been developed using sine of solar altitude (sin (h)) with respect to different could amounts. Newly developed Empirical Formulae are better and more accurate as is evidenced by standard deviation. However newly developed empirical formulae are compared with other formulae given by other scientists. The empirical formulae have been compared with available observed data from Bay of Bengal Monsoon Experiment (BOBMEX) and NCEP re-analyzed data. With BOBMEX data is in agreement, however with NCEP showing lower values.

Changes in the oceanic heat budget and transport is having great importance to understand the Indian climate and predicting its short and long term changes. Surface heat fluxes are the key component in determining the oceanic heat budget and transport [1]. The climatology of ocean–atmosphere energy fluxes based on ship observations remains the most important source of global permanent information about the interaction of Ocean and atmosphere [2]. The surface shortwave radiative fluxes are the basic parameter for radiation budget. Incoming shortwave radiation over the ocean surface is one of the major component affecting land and ocean surface heating, however it plays a vital role in understanding the ocean-atmosphere interactions. Direct measurements of radiative (shortwave) fluxes over the Indian Ocean are sparse. As a result, the importance of radiative fluxes in the overall determination of net surface heat fluxes is not clear in understanding the ocean-atmosphere coupling. After advent of satellite technology, the incoming shortwave radiation at the ocean surface has been estimated using satellite measurements. However, the development of satellite techniques for estimating the incoming shortwave radiation will depend crucially on the capability of calibrating the satellite estimated with insitu measurements in the region of study [3,4]. At present several flux products are available, but all have uncertainties [1].

The most commonly used empirical formulae for estimating the Incoming shortwave radiation over the Indian Ocean are those developed by [5-11]. The widely used formulae are developed using the data over the Atlantic and Pacific Oceans in the extra tropics. A problem with such empirical coefficients may not be suitable or relevant for other climatic regimes and tropical latitudes. Their validity and accuracy remain undemonstrated for the tropics in general, and for the Indian Ocean in particular.

Even though there have been numerous formulae, significant disagreement exists currently between the standard measurements and estimates from the formulae even for clear sky conditions [8,9,12]. India Meteorological Department (IMD) and Indian Institute of Tropical Meteorology (IITM) have developed empirical formulae for estimating the Incoming shortwave radiation over the Indian subcontinent [13,14]. The formulae developed over the land may not be suitable to use at sea, since the sea surface generates cloud regimes different from those generated over land [15]. The aerosols in the atmosphere reduce the total radiation on land when compared with that over the Sea at the same latitude. There is a great need to develop parameterization on shorter time scales for the marine conditions. Large volumes of observations under different weather and climate conditions allow developing a rather comprehensive parametric model for indirect estimation of short-wave radiation at different latitudes in the ocean.

The shortwave radiation parameters have been recorded with the Kipp & Zonen Albedo meter, which measures radiation in the spectrum of 0.3 to 3 μm. The field of view of the instrument is 180°, which ensures radiation measurement from both the upper and the lower hemispheres. Parallel observation of meteorological parameters data have been collected during the four cruises in the ARMEX field experiment program (cruise tracks are given in the Figure 1). The experimental arrangement on board [19] consists of the Albedometer suspended on a boom extending out about 5m horizontally in front of the bow. They are connected through cables of 10m length to the Data logger, placed on the deck. Radiation fluxes have been measured for every 5 minutes; later data has been averaged for one hour. 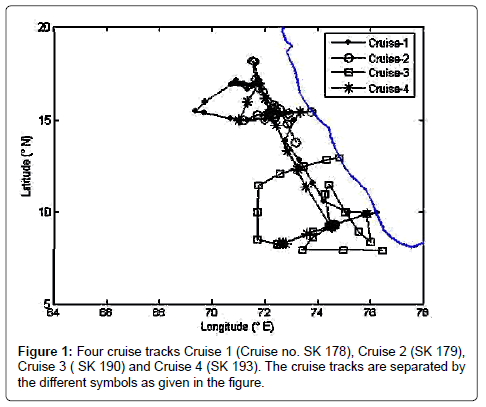 Measurement of shortwave radiation with albedometer

The incoming and reflected shortwave radiation can be measured, when the outputs from the two sensors of the albedometer are recorded separately. With the two sensors connected in anti-series, the net global radiation is measured (spectral range 0.3-30 μm). The irradiance (Wm- 2) value can be simply computed by multiplying the output signal (V) of the albedometer with the reciprocal of the sensitivity figure (calibration factor, K).

The performance and accuracy of the radiometer sensors of Kipp & Zonen have been compared with those of Epply at CAOS, Indian Institute of Science, Bangalore and (has been) found that both are in good agreement [20,21].

The incoming shortwave radiation at the top of the atmosphere can be considered as a constant (Solar constant). It undergoes various changes and absorptions in the path while travels through the atmosphere. The solar altitude (h) varies in the day time depending on the zenith angle of the Sun. The cloud clusters hovering also influence the shortwave radiation. The model estimates are a function of insulation and transmission factor. Transmission factor is a function of solar altitude and cloud amount. Solar altitudes are estimated during the day time and cloud amount has been observed for every hour. So the transmission factor is also calculated for every hour. The Shortwave radiation (QSW↓) data is classified into 9 categories as clear sky (0 Oktas) to overcast in (8 Oktas). Then, the clear sky or cloudy sky regression coefficients are developed to estimate the incoming short wave radiation over the ocean surface.

where Ai & Bi are regression coefficients for different total cloud amounts with i = 0 to 8 Oktas Ai and Bi are determined by least square method. Sin h is the sine of solar altitude.

T.F. is strongly dependent on Sin h and cloudiness.

QT is the radiation at the top of the atmosphere

h is computed as a function of latitude (Φ)

From the Shortwave radiation (QSW↓) measured during ARMEX period and the corresponding values of QT calculated from formula 4, the values of TF are obtained from formula 3. In the present study, the distance correction is also incorporated while calculating the TF. The distance correction accounts for about ± 3.3% of variation in the solar radiation at the top of the atmosphere. Thus, the present model is a slightly improved model.

Figure 2: Co-variation of solar radiation (primary axis) and the cloud amount (secondary axis) for selected days (date are given in the figure). 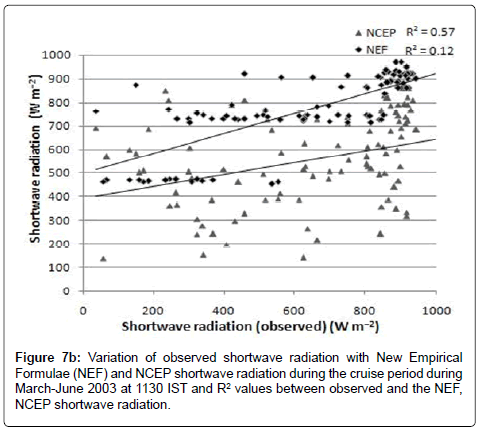 The calculated shortwave radiation using the empirical formulae has been compared with the BOBMEX data and presented in the Figure 8. It can be seen that the observed and the estimated radiation shows a good agreement. During the observed period most of the days are under over cast conditions and even then the present formulae are in good agreement with the observed values. 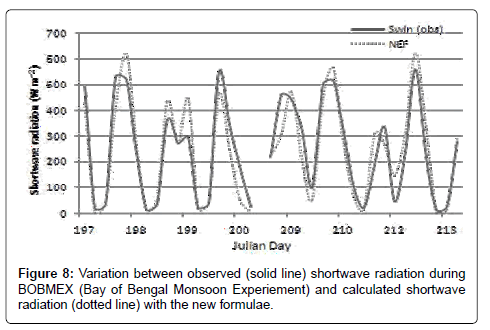 The regression coefficients A and B of formula to estimate incoming short wave radiation for different cloud amounts from clear sky (0 Oktas) to overcast condition (8 Oktas) are developed and are given in Table 1. The newly developed regression formulae are designed to account in a simple way for the physics of sunlight in a cloudy atmosphere. Following the Lumb theme, similar formulae has been obtained by Lind [17] from JASIN data set, Gopala [18] from Kiel Bay (latitude 54.5°N) data set, Dobson [15] from Pacific Ocean data set between 44°N and 62°N and Gopala [22] from BOBMEX Pilot data collected during October – November, 1998. The Root Mean Square (RMS) error and Standard Deviation (SD) of these formulae are given in Table 2 along with the formulae obtained in the present study for comparison. The above formulae and estimations are mainly for extra tropical data except GRSR. However, in the present article author developed regression coefficients based on sin (h) and cloud amount. Another distinguishing feature is that the regression coefficients are developed for 9 different cloud amount categories. Mention should be made here that GRSR also developed regression coefficients for a specific cloud amounts 1, 4, 5 and 6 Oktas. This, in another way will give more accurate estimates as one can expect linearity to be more applicable if all cloud amounts are taken in to consideration.

Table 1: Regression coefficients A and B (formula 3) fitted to data from R/V Sagar Kanya, sorted by Oktas.

From Table 2, the present formulae are better, more nearly and justified to linearization. This is especially true when the cloud amounts are divided in to several categories. A non-linear process can be better estimated and represented as a linear process if the interval of consideration is small within the limitations of availability of data. e are showing the lower percentage of error when compared with the others. Only for the cloud amounts 7 and 8 are showing error more than 10%. The present empirical formulae are more accurate than the previous formulae. The regression equations have their own limitations as they are derived from the cloud amount observed during the period of observations. The process controlling the physical process is out off scope of the paper, since the relevant information is not available at present.

Table 2: Comparison of the new regression formulae with previous formulae.

The newly developed regression formulae are obtained from the data collected during the ARMEX, which covers all types of cloud amounts and the conclusions are:

• The regression formulae have been compared with the previously available formulae. It is emphasized that the present regression coefficients are better as is evident by the root mean square error, standard deviation and also by the mean percentage of error.

• Mean percentage of error with the measured Shortwave radiation is well within the range for the newly developed empirical formulae, except for the cloud amount 7 and 8, where the error is -11.8% and 10% respectively.

The author express his thankfulness to the Department of Science and Technology (DST), New Delhi, India for supporting the study by providing funds to participate in cruises for collection of data. Author sincerely thanks the Project Investigator K. Gopala Reddy and Co-Project Investigator G. Bharathi for giving opportunity to use the instruments and data collected onboard. The author thank National Center for Antarctic Ocean Research (NCAOR), Goa, India for providing facilities to collect data onboard R/V Sagar Kanya.

Copyright: ©2013 Subrahmanyam MV. This is an open-access article distributed under the terms of the Creative Commons Attribution License, which permits unrestricted use, distribution, and reproduction in any medium, provided the original author and source are credited.