Background: Injury to the cavernous portion of the Internal Carotid Artery (ICA) during endoscopic skull base surgery is a well-recognized rare complication, which can be associated with high rates of morbidity and mortality. Many techniques have been suggested to manage ICA injury with varying degrees of success. A detailed technical description of an operative technique for endoscopic management of carotid artery injury is provided.

Methods: A case of ICA injury during endoscopic skull base surgery is presented. The immediate treatment measurements include: 1) early recognition of ICA injury; 2) briefing of the team and preparations; 3) packing; 4) harvesting of temporalis muscle patch; 5) placement of the muscle patch over the defect; 6) gentle compression for 10 minutes.

Results: The technique presented facilitates quick repair, restoring normal blood flow through the damaged artery and thereby preventing exsanguination or the symptoms of stroke that may occur from prolonged occlusion of the ICA.

Conclusions: This protocol has been useful for the management of this life-threatening complication.

Intraoperative injury to the Internal Carotid Artery (ICA) during Endoscopic Endonasal Surgery (EES) of the skull base is a rare and well recognized complication which can potentially be associated with high rates of morbidity and mortality [1-3]. In the event of a traumatic injury to the ICA during EES, hemorrhage might be massive, difficult to control as the access to the sphenoid sinus is limited and the visual field becomes quickly obscured. Bleeding from this vital artery can become lethal within minutes and even when the bleeding is controlled, permanent neurological deficits frequently persist [4-6]. According to the literature, the risk for injury to the ICA following endoscopic tumor resection is around 1% [7-11]. Many techniques have been developed to manage ICA injury including controlled hypotension, ipsilateral and contralateral neck pressure, proximal control through neck dissection and distal control, with varying degrees of success. The size of the arterial damage, its nature (small perforator avulsion vs. large, direct injury) and its site would determine its treatment and the ability to control the injury while preserving the vessel. The ability to repair the ICA using endoscopic techniques is limited by the narrow surgical field and inability of suturing. Pressure application or bipolar cautery were suggested when the defect in the vessel wall was small. However, in cases of significant bleeding during EES, endovascular treatment was suggested as definitive treatment.

In this paper, we provide a detailed description of an endoscopic repair after carotid artery injury with a temporalis muscle patch.

The bony separation between the sphenoid sinus and the cavernous portion of the ICA is very thin [12], and injury to the ICA can occur via penetration to the lateral sphenoid wall. According to Fujii et al. 88% of 50 carotid arteries in cadavers had a bony thickness less than 0.5 mm [13], and in 8% of cases, the bone overlying the internal carotid artery was dehiscent. Vincentelli et al. noted that 4% of 116 cadavers had minimal bone [14] while Kennedy et al. found that 20% of postmortem specimens had a dehiscent intrasphenoid carotid artery [15]. Similarly, in a review of 500 consecutive axial CT scans Johnson et al. observed that 14.4% radiographs had minimal to no bone between the two structures [16].

A 57 years old otherwise healthy woman was referred to our institution due to complaints of intense headaches, speech difficulties and dysphagia for 2 weeks. At physical examination the patient demonstrated slurred speech with tongue deviation towards the left. Neck examination and endoscopic flexible fiber optic were normal, and no other neurological deficits were observed.

Magnetic Resonance Imaging (MRI) scan demonstrated an enhanced clival mass, 48×36×55 mm, invading the right sphenoid sinus, the occipital condyles, the dense and the anterior arch of C1 (Figure 1). The mass was pushing the pituitary gland upward, invading the parapharyngeal space, upper middle and lower parts of the clivus with intradural extension through the midclivial region pushing the pons and the basilary trunk. Inferiorly the mass invaded the occipital condyl at both sides, the anterior ring of C1 and the upper dens. Radiological features were consistent with chordoma, and the patient was scheduled for an extended trans sphenoidal endonasal resection. 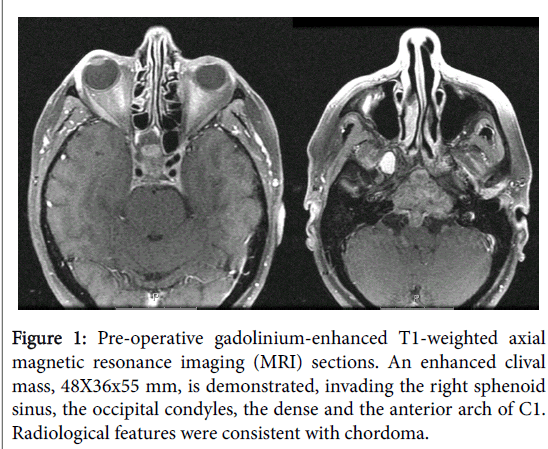 The operation was performed under general anesthesia using an intraoperative frameless navigation. The surgery was conducted under electrophysiological monitoring. After inferior turbinate lateralization, middle turbinectomy, middle antrostomy, anterior and posterior ethmoidectomy, posterior septectomy and elevation of a nasoseptal flap, the tumor was exposed in the sphenoid sinus. Using a high speed coarse drill, the rostrum and clival tumor extensions were drilled out. The anterior wall of the sphenoid sinus was removed in order to provide a better access. The tumor was of rubbery consistency and non-suckable and therefore tumor removal was performed with a Kerrison rongeur forceps and a drill. When the tumor was extirpated from the left sphenoid wall, bleeding was identified from the left ICA at the cavernous part. The exact location, size and configuration of the defect at the vessel's wall was not identified. The operating team and the anesthesiologist were immediately notified. Packed cells and fresh frozen plasma were ordered to the operating room and a second anesthesiologist joined the team. Vital signs were monitored carefully; arterial blood was drawn to monitor blood gases and hematocrit levels. No hemodynamic compromise nor deviation from normal ranges of any of the monitored parameters were noted.

Using two-surgeon four-hand technique, two attempts to correct the injury with Surgicel (Ethicon, West Somerville, NJ, USA) were unsuccessful. Then, a decision to repair the injury with a temporalis muscle patch was made. A 4×4 cm warm saline soaked gauze was inserted under vision into the nasal cavity, with its tip placed directly on the injured part of the left ICA applying packing using local pressure. Full control of the bleeding was achieved. Next, a 2×2 cm muscle patch flap, not including the fascia, was harvested from the left temporalis muscle through a small scalp incision at the superior temporal line in a coronal plane. After harvesting, the gauze was removed, and the muscle flap was inserted and positioned directly over the injured ICA. Gentle pressure was applied with overlying cotton patties for exactly 10 minutes. During that time, the blood pressure was kept above 100/60 mmHg. After 10 minutes the cotton patties were removed without evidence of residual bleeding. The total blood loss was <250 cc, and that there was no hemodynamic compromise (vital signs, including blood pressure were at normal ranges, so as lab results including arterial blood gases, hemoglobin and hematocrit levels). The patient received 1 unit of packed red blood cells (300 mL/ unit) and 2 units of fresh frozen plasma, and tumor resection was completed. The right CN XII was monitored during the surgery and preserved while the left nerve was non-functional prior to surgery.

After the operation, the patient was extubated uneventfully and transferred to the postsurgery care unit for observation. No postoperative complications were encountered. Postoperative CT scan with contrast material demonstrated no pneumocephalus, pseudoaneurysm or intracranial bleeding. On 1 month follow-up the patient was asymptomatic, maintained good outpatient oral intake, with great relief of her pre-operative complaints. There have been no neurological deficits except for the known preoperative left CN XII palsy, which was improved following surgery. The surgical wounds were intact, without evidence of infection or inflammation, without local pain. The specimen's pathology analysis demonstrated clival chordoma. The patient was referred for adjuvant radiotherapy.

Dissection around the cavernous, paraclival, and petrous segments of the ICA with a drill or microdissection may be associated with vascular injury [7-11,17,18].

Gardner et al. [18] described their experience of seven ICA injuries in 2,015 endoscopic endonasal skull base cases over a 13-year period, giving an incidence of 0.3%. Most injuries (5 of 7) involved the left ICA, and the most common diagnosis was chondroid neoplasm (chordoma, chondrosarcoma; 3 of 7 [2% of 142 cases]). Two injuries occurred during 660 pituitary adenoma resections (0.3%). The paraclival ICA segment was the most commonly injured site (5 of 7). Four of 7 injured ICAs were sacrificed either intraoperatively or postoperatively. No patient suffered a stroke or neurological deficit. There were no intraoperative mortalities; 1 patient died postoperatively of cardiac ischemia. One of the 3 preserved ICAs developed a pseudoaneurysm over a mean follow-up period of 5 months that was treated endovascularly [18]. Injury of the ICA might be associated with long-term neurological deficits [1,4,6]. Therefore, when such a lifethreatening complication occurs, prompt identification and intervention is crucial. Identification of the ICA is essential when operating in the cavernous region. The posterior wall of the sphenoid sinus, which has the optic and carotid prominences, should not be considered sufficient protection of the carotid and optic nerve and avoiding injury is the best management. Valentine and Wormald [19] developed a sheep model to recreate and train surgeons in the management of ICA injury.

A number of hemostatic techniques were tested, including muscle patch treatment (harvested sternocleidomastoid), Floseal (Baxter International, Deerfield, IL, USA), oxidized regenerated cellulose (Surgicel Nu-Knit, Ethicon, West Somerville, NJ, USA), MicroFrance Wormald vascular clamps (Medtronic, Jacksonville, FL, USA), and UClip anastomotic sutures (Medtronic) to suture the vascular defect. Muscle patch treatment was effective at achieving vascular control, as was use of the MicroFrance Wormald vascular clamp and U-Clips [19]. Packing and placing adequate pressure has the potential to stop the bleeding, however, applying enough pressure to stop the bleeding can lead to complete occlusion of the artery [1,4,6]. Thus, despite controlling the bleeding, the same complications of exsanguination may occur as a result of reduced blood flow to the brain. Applying pressure can lead to pseudoaneurysm formation, especially following endovascular recanalization [20,21]. As Liskey et al. reported in their literature review, abrupt ICA occlusion is associated with a stroke rate of up to 26% and a mortality rate of 12% [22]. Roski et al. had a 16.6% incidence of strokes in their long-term follow-up (average 12.5 years) after ligation of the ICA for an ICA aneurysm [23].

The mortality and morbidity of an ICA injury during EES can be decreased if the team is properly trained for this event. The following steps are the basis of successful control of ICA bleeding: 1) Early recognition of the ICA injury 2) briefing of the team and preparations; 3) packing; 4) harvesting of temporalis muscle patch; 5) placement of the muscle patch over the defect; 6) Gentle compression for 10 minutes. Using this technique the continuity of the vessel is maintained and neurological complications can be avoided.s

Copyright: © 2015 Duek I. This is an open-access article distributed under the terms of the Creative Commons Attribution License, which permits unrestricted use, distribution, and reproduction in any medium, provided the original author and source are credited.