Epidemiology of Tuberculosis in Bahrain and Pre-employment Screening

Objective: Evaluate the epidemiology of tuberculosis (TB) in Bahrain over the past 10 years and review the local policy of pre-employment screening strategy for and treatment of latent tuberculosis infection.
Methods: Retrospective review of TB surveillance data in ministry of health during the period (2007-2016).
Results: The annual incidence of TB in Bahrain reduced significantly from 34/100,000 in 2007 to 11/100,000 population in 2016. There was a total of 2,440 reported TB cases during the study period; majority of cases (82%) were Non-Bahrainis, 68% were males and 60% had pulmonary disease.
Conclusion: TB incidence in Bahrain is declining, and majority of cases are among male expatriates which reemphasize the importance of pre-employment screening among foreign workers as the main preventive element in TB control program in Bahrain in order to identify most immigrants with latent tuberculosis, thereby preventing substantial numbers of future cases of active disease.

The evolving epidemiology of TB in most middle to high-income countries particularly those with high rate of immigrants is driven mostly by migration of individuals from countries with a high burden of TB disease, such as sub-Saharan Africa and the Indian subcontinent [1] and by the reactivation of latent tuberculosis infection that was acquired before migration [2]. These factors result in a high incidence of tuberculosis in immigrants in the first 2-5 years after migration (with about 50% of foreign-born cases presenting in the first 5 years after migration), which then decreases over time [3].

TB in Bahrain remains a public health concern. Although TB incidence has fallen over the last years [4-6] there is increasing concern that these declines may not be sustained. Whilst TB notifications in Bahrain among local-born nationals continue to fall, those from the foreign-born migrant population are worrying, as their proportion in Bahrain population continue to increase year on year [7]. As a result, foreign workers who make up a big proportion of the our population in Bahrain, they also disproportionately bear the burden of TB disease accounting for around 80% of TB cases as shown in most previous epidemiological studies in Bahrain [4-6] and this might adversely affect TB control in Bahrain considering the vast influx of foreign workers from TB endemic countries.

There is a lot of uncertainty about the ideal recommendation of screening program for expatriate coming from high TB burden countries and residing in low TB burden countries. Many previous published international studies have disclose this fact and found marked heterogeneity in the national guidelines followed by different countries for TB screening of immigrants [8-13]; both in which immigrants are screened, and how they are screened [14-20].

The pre-employment screening program in Bahrain for expatriate offering two different components based on the work category of the expatriate. Domestic workers (housemaids and domestic drivers) are usually subjected to more comprehensive screening program that include chest X-ray and PPD testing, while other foreign workers like laborer are subjected to limited screening that include chest X-ray only.

The rationale supporting TB screening approach remains a matter of debate, especially because local data are scarce for the prevalence of latent infection in new immigrants and the uncertainty about the optimum cutoff for a positive skin test in the context of previous BCG vaccination, which is the routine practiced in most countries with high TB burden.

We did this retrospective study to review the epidemiology of TB in Bahrain, concentrating on the contribution of Non Nationals, and to review the current practice of screening for latent infection at entry to Bahrain.

In the kingdom of Bahrain; we have efficient surveillance program obliged mandatory reporting system of most communicable diseases including TB, its notification for new cases to public health directorate in ministry of health is obligatory at the time of initiating antituberculosis treatment and this is ensured through restricting the dispensing of anti-tuberculosis drugs to the pharmacy of main governmental hospital where a special registration number is needed to initiate therapy. Collected data are tabulated and summarized in the public health directorate, and published in the annual statistical health report on the ministry of health online web page.

In this study, Authors took the initiative to review TB surveillance data from the annual health statistics of MOH for the period (2007– 2016). TB incidence was calculated based on population data obtained from the Bahrain Central Informatics Organization, General directorate of statistics [7]. 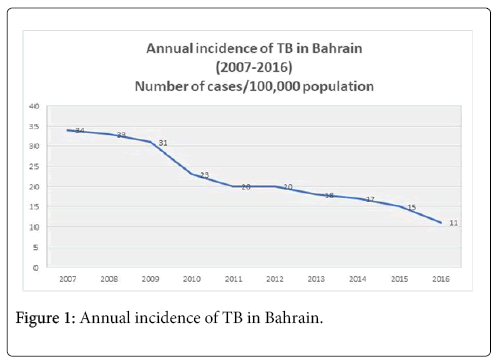 Among all cases, the majorities (2000 cases, 82%) were Non- Bahrainis, among the pulmonary cases; there was more predominance of non-Bahrainis (84% Non-Bahrainis vs. 16% Bahrainis) as shown in (Figure 2). 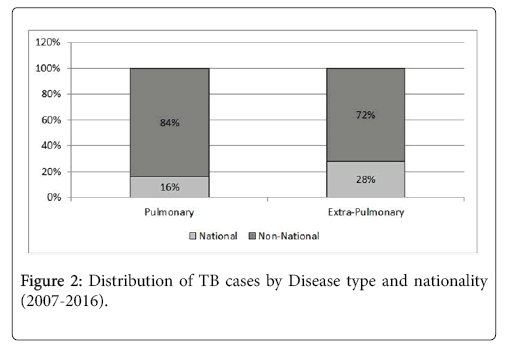 Among all TB cases, the main age group affected was between 25-34 years old, as shown in Figure 3. 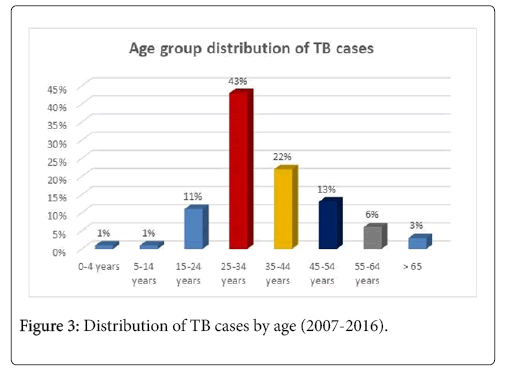 There was no any reported case of miliary TB among pediatric age group younger than 5 years during the study period (Figure 4). 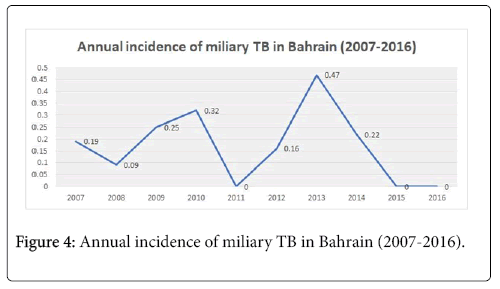 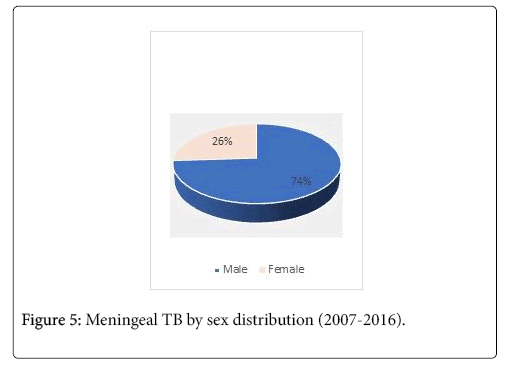 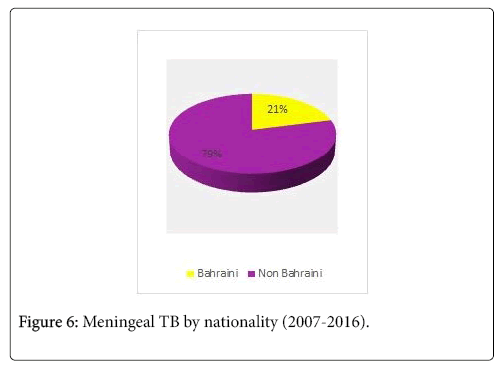 Incidence of TB in Bahrain is going down over the last 10 years, similar to the worldwide epidemiology.

Male sex predominance in our study (68%) in similar to most previous international studies that showed male gender predominance in TB incidence which has been previously explained [15-19].

Our study confirmed the overt predominance of TB among Non- Bahrainis, the fact that has been previously illustrated in most epidemiological studies of TB in Bahrain [4-6].

On the contrary, UAE and Oman showed marked predominance of tuberculosis (76.7% and 79% respectively) among their nationals [24,25].

Our study showed preponderance (43%) of TB among young age group (25-34 years); similar result was obtained from Qatar which share the higher TB incidence among non-nationals [20]. Other studies from neighboring countries where these is equal distribution of TB between nationals and non-nationals like Saudi Arabia, TB incidence increased with age and was highest for those older than 65 years old [21-23].

As it’s clear from this study that our TB epidemiology in Bahrain is driven mostly by migration of individuals from countries with a high burden of TB and by the reactivation of latent tuberculosis infection after migration, These factors result in a high incidence of tuberculosis in immigrants and make eradication of TB in Bahrain is very difficult considering the incremental prevalence of expatriate workers entering the kingdom [7].

TB control program in Bahrain might need to consider adding PPD testing or IGRA, for all expatriate from high TB burden countries during pre-employment screening including non-domestic workers, then expatriate with positive PPD after rolling out active disease (by chest X-ray and sputum for microscopy and culture) should be treated with INH therapy and should have a strict follow up plan to ensure compliance during the treatment period.

Of course, periodic and vigilant surveillance of TB epidemiology is imperative for evaluation of TB control program in the kingdom.

In addition, continuation of other fundamental elements of TB control strategy such as passive case finding of active TB, tracing with treating and follow up of all contacts, selective BCG vaccination to high risk group (babies of parents coming originally from high TB burden countries) and ensuring the availability of all needed TB diagnostic investigation and treatment freely in governmental hospitals for Bahraini and Non-Bahraini patients.

Modification of current national guidance for immigrant screening might need to be supported by having local data about the prevalence of and risk factors for, latent tuberculosis infection in immigrants upon entry to the kingdom and correlation between cases with active TB and previous pre-employment screening finding.

We are looking forward for future research to determine the prevalence of latent TB infection in immigrants entering Bahrain and their risk factors with correlation to active TB cases, this is important to prioritize and define the target group for comprehensive preemployment screening that include PPD or IGRA to quantify the costeffectiveness of such comprehensive screening at different thresholds.

Copyright: © 2018 AlKhawaja S, et al. This is an open-access article distributed under the terms of the Creative Commons Attribution License, which permits unrestricted use, distribution, and reproduction in any medium, provided the original author and source are credited. 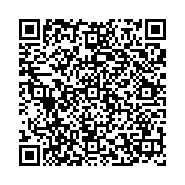