Copyright: © 2016 Zhao X, et al. This is an open-a ccess article distributed under the terms of the Creative Commons Attribution License, which permits unrestricted use, distribution, and reproduction in any medium, provided the original author and source are credited.

Phytoremediation is an emerging cost-effective and environmentally sound alternative to conventional remediation technologies through the efficient use of plants to remove or immobilize environmental contaminates in complex matrices (soil, water or sediments) [1-3]. Since phytoremediation involves growing plants in a contaminated matrix, various types of plants have been evaluated. For example, many fast-growing plants for their ability to tolerate and accumulate metals have been investigated, including rapeseed (Brassica napus L.), Indian mustard (B. juncea), tumbleweed (Salsola kali L.) and so on [4,5]. Among the various types of plants, sunflowers (Helianthus annuus L.) have been commonly used in numerous phytoremediation studies due to their high tolerance to heavy metals and their ability to use the seeds as raw materials for biodiesel production [6-8].

The phytoremediation of heavy metals and metalloids such as cadmium (Cd), chromium (Cr), copper (Cu), lead (Pb), mercury (Hg), nickel (Ni) and zinc (Zn) in various environment has been reported [9], and the phytotoxicity of various heavy metals on different plant species has been investigated [10,11]. Based on previous studies, the variation in phytotoxicity of various heavy metals is mainly attributed to the differences in both the inherent toxicity of the various trace metals and the tolerances among plant species [12].

In order to identify the appropriate plant seeds that can remove or immobilize heavy metals in different matrices, the phytotoxicity of heavy metals on plant seeds has been investigated by monitoring both the inhibition of seed germination and the retardation of plant growth [13,14]. As yet, the most widely used acute phytotoxicity tests are both seed germination test (a direct exposure method) and the root elongation test [15].

Recently, the seedling vigor index (SVI) has been used as a phytotoxicity index to evaluate the effect of heavy metal on seedling growth [22,23]. Seedling vigor is a measure of the extent of damage that accumulates as viability declines, and the damage accumulates in seeds until the seeds are unable to germinate and eventually die [24]. Numerous studies have been done to investigate the effects of various species and concentrations of heavy metals on the early growth of seedlings. Nonetheless, no mathematical model to quantitatively describe the relative effect of the concentrations of heavy metals on germination and seedling growth of plants has been developed.

Sunflower was selected as a hyperaccumulator plant in this study because sunflower can accumulate some heavy metals from the soil [25,26]. Sunflower seeds were obtained from a commercial market because the species and cultivar are frequently and widely cultivated in the Republic of Korea. Heavy metals [i.e., Cd (II), Ni (II), Pb (II), and Zn (II)] evaluated in this study were obtained from the salts of CdCl2·2H2O; NiCl2·6H2O; PbCl2; and ZnCl2, respectively, and purchased from Sigma-Aldrich Co., USA and DaeJung Chemicals & Metals Co. Ltd., Republic of Korea.

Since this study focused on the effects of heavy metals on the early growth of sunflower seeds, no other elements were added to eliminate others effects when using the heavy metal solutions. The concentrations of the heavy metals used in this study were determined based on a previous study [27], reporting that the concentration ranges of Cd (II), Ni (II), Pb (II), and Zn (II) in which seeds can germinate are significantly different. Deionized water was selected as the control (pH=7.14) test. The heavy metal concentrations of the solutions was decided from previous studies and ranged up to 500 mg/l for Cd and Ni, 3,000 mg/l for Pb, and 900 mg/l for Zn, respectively. The average pH values of Cd, Ni, Pb, and Zn solution were 5.31 ± 0.19, 5.69 ± 0.09, 4.76 ± 0.23, and 6.58 ± 0.12, respectively.

The phytotoxicity of the target heavy metals were evaluated using the seed germination test described by the Environment Protection Agency (EPA, OPPTS 850.4200, 1996a). For each seed germination test, 15 sunflower seeds were exposed to heavy metal solutions with different concentrations and placed in a multi spin shaker (VS-8480MX4, Vision Scientific Co., Ltd., Republic of Korea) under dark condition at 25 ± 1°C. The detailed experimental methods are presented in Table 1. After seven days, the seed germination percentage and the lengths of both root and shoot were measured. All the values are presented as the average values ± standard deviation (SD) obtained from at least three replicates. The heavy metal concentrations in the sunflower tissues were not analyzed because the growth amounts of sunflower tissues were too small for analyses.

The IBM SPSS statistics (Version 21.0) analysis program was used for the statistical analyses. The data were analyzed with one-way analysis of variance (ANOVA) to determine the effect of the treatments, and Duncan’s multiple range tests was applied to test the statistical significance of the differences in the averages of the treatments. Linear regression analysis was also performed among the heavy metal concentrations, seed germination percentages, and elongations of the roots and shoots.

A germination test determines the maximum germination potential, or viability, of a seed and can be used to estimate the seed vigor, which is the extent of damage to a seed. Both mean root and shoot length were calculated after the seedling length was measured, and seed germination percentage is the percentage ratio of the number of germinated seeds to initial fifteen test seeds. The model presented here is based on the seedling vigor index [28] and calculated as follows:

Table 2: Effects of heavy metal concentrations on the seed germination of sunflower seeds.

As summarized in Table 3, a linear regression between the heavy metal concentrations and germination percentages was obtained with R2 values greater than 0.86. Based on this linear regression, the IC50 (half of the maximal inhibitory concentration) values of Cd, Ni, Pb, and Zn on sunflower seeds were estimated as 100.07 mg-Cd/l, 139.78 mg- Ni/l, 1033.14 mg-Pb/l, and 376.03 mg-Zn/l, respectively. The coefficient a1 of GP for Cd, Ni, Pb, and Zn were also estimated as 0.146, 0.157, 0.027, and 0.767, respectively. According to both the IC50 and a1 values, the resulting order of toxicity for the heavy metals on sunflower seed germination was Cd>Ni>Zn>Pb.

*: Half of the maximal inhibitory concentration, which was estimated with the GP linear function.

Heavy metal treatments inhibited both seed germination and the elongation of the root and shoot. Figure 1 shows the effects of the Zn concentrations on the length of the roots and shoots of the sunflowers. Regression analysis between the root length and Zn concentrations, as well as the shoot length and Zn concentrations showed a robust linear correlation with R2>0.87. Similar results were also observed in the germination tests with the Cd, Pb, and Ni solutions (see Table 3). As summarized in Tables 4 and 5, the lengths of both the root and shoot significantly decreased with the treatments of Cd, Ni, Pb, and Zn compared to the control group. Especially, the inhibitions were clearly detectable above certain critical concentrations (e.g., 50 mg-Cd/l, 50 mg-Ni/l, 100 mg-Zn/l, and 1,000 mg-Pb/l).

Table 4: Effects of heavy metal concentrations on the root length of sunflower seedlings.

Table 5: Effects of heavy metal concentrations on the shoot length of sunflower seedlings. 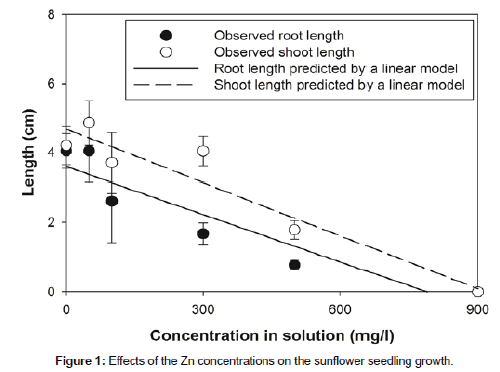 Figure 1: Effects of the Zn concentrations on the sunflower seedling growth.

Because Cd is a highly toxic contaminant that affects many plant metabolic processes [34], treatments at 50 mg-Cd/l produced significant (P<0.05) effects on root growth compared to those at 50 mg/l for Ni, Pb, and Zn. All root elongations in the Cd treatments at various concentrations were shorter than those in the Ni, Pb, and Zn treatments. Considering that sunflower roots can accumulate significant amounts of these heavy metals, shorter root elongations in the Cd treatments indicate that the sunflower roots accumulated Cd to a higher degree than the other heavy metals. These results are consistent with a previous study using sunflower seeds treated with Cd and Cu solutions [35].

Interestingly, the shoot lengths exposed to the 50 mg-Cd/l, 1,000 mg- Pb/l, and 50 mg-Zn/l solutions exhibited a growth increase compared to those of the control by 16.32%, 15.57%, and 15.55%, respectively. This may be attributed to the metal hormesis, in which small doses of metal can increase the shoot growth [36]. Similar results have also been reported in previous studies using Dorycnium pentaphyllum, Medicago sativa L., and Salosla kali L. with Cd, Zn, Ni, and Pb [5,37,38].

Generally, the effects of heavy metals on seedling growth depend on the amount of toxic substance extracted from a given environment. As the concentrations of Cd, Pb, Zn, and Ni increased the seedling growth of sunflowers decreased. Similar tendencies have also been reported in other studies with A. lebbeck in Cd and Pb contaminated conditions [32]. For the phytotoxicity of heavy metals, root elongation was more sensitive than shoot elongation because the heavy metals show further accumulation in root than in shoot. For instance, Zn was mainly restricted to the radicle while Cd had an even distribution between the radicle and shoots [37].

Using the inhibition of the germination percentage, root elongation, and shoot elongation as an index to describe the relationship between the heavy metal concentration and early seed growth has its limitations because the process of seed germination can be affected by various interactions of factors including temperature, water availability, oxygen, light, substrate, maturity of seed, and physiological age of seed [39]. Thus, the seedling vigor index (SVI) is required to compare the relative phytotoxicity in plants.

The relationship of the heavy metal concentrations and the seedling vigor index of the sunflower seeds are shown in Figure 2. Compared to those of the control, the sunflower seedlings showed a low tolerance of Cd, Ni, Pb, and Zn in their corresponding treatments. The relationship among the coefficients of the linear equations for GP, Lr, and Ls presented in Table 3 satisfies equation 6, which denotes the necessary conditions for the mathematical model. 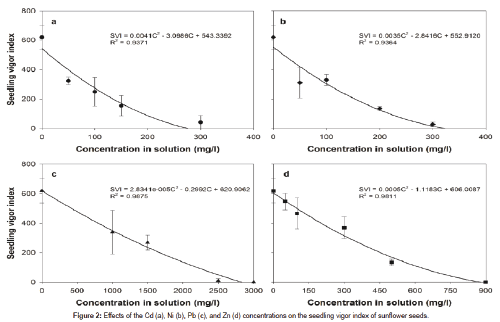 Figure 2: Effects of the Cd (a), Ni (b), Pb (c), and Zn (d) concentrations on the seedling vigor index of sunflower seeds.

The coefficient (a2+a3)a1 of the SVI estimation model for Cd, Ni, Pb, and Zn were 0.0041, 0.0035, 2.8341e-005, and 0.0005, respectively. According to the nature of the quadratic function, the heavy metal inhibition on early sunflower seedling growth was on the order of Cd>Ni>Zn>Pb. Similarly, heavy metal phytotoxicity follows the following trend: Pb ≈ Hg>Cu>Cd ≈ As>≈ Ni ≈ Zn>Mn [12]. Although similar heavy metal phytotoxicity order was obtained in this study, the slightly different results from this study were mainly attributed to the difference in the target plant species and the range of the heavy metal concentrations.

This work was supported by the Korea Ministry of the Environment as “The GAIA (Geo-Advanced Innovative Action) Project” and the Korea Ministry of Education through the Brain Korea 21 Plus research program. We also appreciate the technical support of the Institute of Construction and Environmental Engineering and Engineering Research Institute, Seoul National University.