4Scientific Board of Fishery in Agricultural University of Sari, Iran

Copyright: © 2015 Nematzadeh GH, et al. This is an open-access article distributed under the terms of the Creative Commons Attribution License, which permits unrestricted use, distribution, and reproduction in any medium, provided the original author and source are credited.

Marine microalgae constitute natural sources of carotenoids used in a variety of drugs, and pharmaceutical, food and cosmetic applications. In this study, inducible effects of K2HPO4 on the accumulation of some apo carotenoids including chlorophyll-a and b, beta carotene, astaxanthin, lycopene and pheophytin were explored using a completely randomized design with five treatments and three replications. Cellular extracts were carried out with dimethyl sulfoxide solvent. A Duncan’s test was performed on data obtained through spectrophotometric absorption of studied metabolites. Our results showed a significant difference among the treatments. The metabolites content in cellular extracts at the stationary phase of algae were estimated at the highest level of 4.5 and 3.58 mg/g for chlorophyll-a, and beta carotene, respectively, in the fifth treatment level. Astaxanthin and lycopene were 1.505 and 2.84 mg/g, respectively, in the second treatment. There was no significant difference between the chlorophyll-b and pheophytin pigments when compared to the control.

Ahmed et al. investigated apo carotenoids in cell extracts of 12 species of saltwater microalgae along shoreline and subtropical regions and showed that six carotenoids (xanthine, lutein, epoxide, zeaxanthin, and alpha- and beta-carotenes) were the major carotenoids in different microalgae species [1]. The large number of existing species of microalgae constitutes a unique reservoir of biodiversity, which supports potential commercial exploitations of many novel products besides vitamins, pigments and polyunsaturated fatty acids [2]. Also, microalgae species can be used as bio remediators; for example, both Spirulina platensis and Chlorella vulgaris proved to be efficient in terms of metal accumulation in two-week-long experiments [3]. With the exception of molybdenum, the bioaccumulation capacity of Chlorella exceeded that of Spirulina. Iron (789.7 ± 102.7 mg kg-1) and zinc (378.1 ± 5.5 mg kg-1) were accumulated to a large extent by Chlorella vulgaris, while the bioaccumulation ability of Spirulina platensis proved to be the most significant for iron (676.9 ± 27.6 mg kg-1) and molybdenum (5.79 ± 1.1 mg kg-1).

Apo carotenoids are bio-active compounds derived from carotenoids. These compounds are derived metabolically from the failure of the oxidative of C40 [4,5] (Figure 1). Given that there is a significant amount of carotenoids in microalgae, species with high carotenoid content are needed to be explored. This study aimed at the evaluation of di-potassium hydrogen phosphate (K2HPO4) effects on the accumulation of some secondary metabolites in Spirulina cysts at the stationary phase. 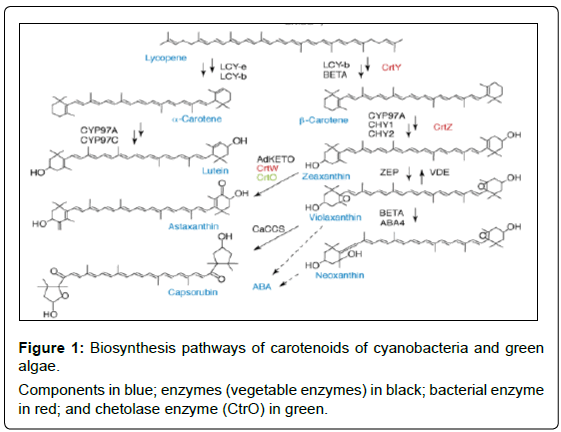 In this study, the modified Giullards solution with vitamin B-complex was used as a microalgae growth medium. The salinity of sea water used for culture medium was 12-13 grams per liter so as to be disinfected by 70% chlorine solution. Five levels of K2HPO4 were applied as desired treatments in suspension culture under a completely randomized design (CRD) (Table 1).

Table 1: Applied treatments of K2HPO4 in suspension culture of Spirulina.

Metabolites were extracted using DMSO (dimethyl sulfoxide) solvent under 55 °C. After filtering of extracts from any solid materials, the ratio of absorption read in a suitable range of wavelength for Apo carotenoids included chlorophyll-a and b, b-carotene, astaxanthin, lycopene, and pheophytin. Statistical analysis was performed using GenStat 12.1, and Duncan’s test was used at 5% (P<0.05) significance level.

Carotenoid production appears to be one of the most successful case studies of blue biotechnology. Since the rising market demand for pigments from natural sources has promoted a large-scale cultivation of microalgae for synthesis of such compounds, significant decreases in production costs are expected in coming years. In the present research, DMSO was used as an extraction solvent. Extraction usually resorts to hexane and has advantages over alkaline treatments because all lutein and zeaxanthin are converted to their free forms, while carboxylic acids and chlorophylls remain in the aqueous phase, this method has been optimized for Spirulina almeriensis [6,7]. In the stationary phase, chlorophyll-a in the control treatment was estimated at 4.5 mg; betacarotene at 3/588 mg in the fifth treatment; astaxanthin and lycopene at 1/505 and 2/84 mg per gram, respectively, in the second treatment. No significant difference was detected in chlorophyll-b and pheophythin among the treatments (Figures 2-4). 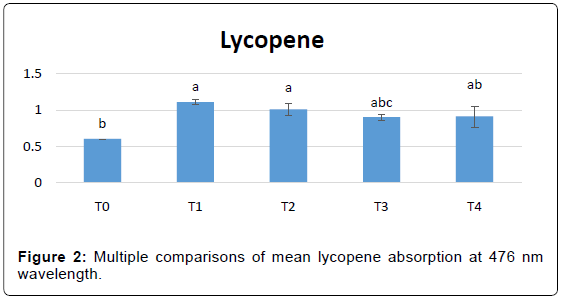 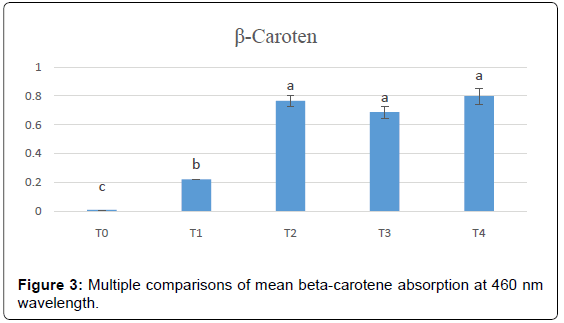 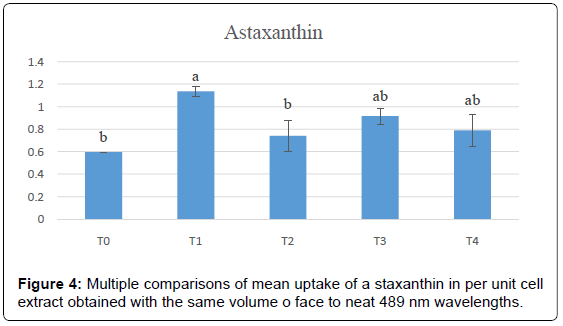 Figure 4: Multiple comparisons of mean uptake of a staxanthin in per unit cell extract obtained with the same volume o face to neat 489 nm wavelengths.

In another experiment, beta-carotene extracted from Spirulina platensis, and effects of extraction solvent, biomass proportion to amount of solvent, temperature, and electrical noise effect of different treatments on the extraction of astaxanthin were investigated using ultrasound waves. Their results showed that the optimum conditions for the extraction of carotene from an economic point of Spirulina required 12 times higher than the amount of beta-carotene. Radiationinduced biosynthesis of astaxanthin was also studied in Haematococcus pluvialis [9]. Advances in our knowledge of the underlying physiology, biochemistry and molecular genetics of carotenoid-producing microalgae are now urged—which would have a major impact upon development and optimization of this (and alternative) microalgabased technologies.

Authors are thankful to the Director of Genetics and Agricultural Biotechnology Institute of Tabarestan (GABIT) for the financial support of this project.