Copyright: © 2017 Anwar M, et al. This is an open-a ccess article distributed under the terms of the Creative Commons Attribution License, which permits unrestricted use, distribution, and reproduction in any medium, provided the original author and source are credited.

The present study aims to isolation, identification and characterization of heavy metal resistant bacteria from six rivers in Basra Southern Iraq. Two species of Micrococcus (M. halobius and M. kristinae) were isolated on the basis of morphological and biochemical profiles and selected based on high levels of heavy metals (cadmium, lead, copper and nickel) resistance. The concentrations of dissolved heavy metals (Cd, Pb, Cu and Ni) in rivers were determined. The maximum tolerance concentration (MTC) of isolates against Pb, Cu, Cd and Ni was determined in solid media after 72 h incubation. All isolates were resistant to Pb (2200-2600) μg mL-1, Cu (400) μg mL-1, Cd (300-400) μg mL-1 and Ni (200-300) μg ml-1. Living biomass of M. halobius and M. kristinae were used for the removal of heavy metal ions at different concentrations (25, 50 and 100) μg mL-1 from aqueous metal solutions. The best concentration of removal was 25 μg mL-1 after 72 h incubation at 120 rpm. Percent removal efficiency of M. kristinae was 47.22, 26.26 for Cu and Pb respectively, and for M. halobius was 31.52, 27.87 for Cd and Ni respectively.

The environmental contamination is increasing incessantly with heavy metals by industrial processes, domestic, agricultural, medical and technological applications have led to their wide distribution in the environment [1-3]. Although heavy metals are naturally occurring elements that are found throughout the earth’s crust, most environmental contamination and human exposure result from anthropogenic activities such as mining and smelting operations, industrial production and use, and domestic and agricultural use of metals and metal-containing compounds [4]. Environmental contamination can also occur through metal corrosion, atmospheric deposition, soil erosion of metal ions and leaching of heavy metals, sediment re-suspension and metal evaporation from water resources to soil and ground water [5]. Natural phenomena such as weathering and volcanic eruptions have also been reported to significantly contribute to heavy metal pollution [6,7].

Heavy metals are considered chemical elements with a mass of 22, a density than 5 g mL-1. This definition includes 69 elements, of which 16 synthetic. Some of these toxic extreme to humans items, even at very low concentrations [8,9]. Most heavy metals, cations and this determines their adsorption in the functional groups is negatively charged, are present in order: cell surface which is anionic at a pH of 4-8 in general; Surfaces with residual hydroxides (OH) or thiol (SH) and anionic salts as phosphate and sulfate, humic acid and clay minerals [8].

Microbial population in metal polluted environments adapted to become metals resistant [10] by providing two types of uptake system, the bioaccumulation, which is the active method of metal accumulation by living cells, and this activity may influenced by environmental growth conditions, as temperature, pH, and biomass concentrations. The second method is biosorption which can be defined as the removal of a metal or metalloid species, compounds and particulates from environment independently of biological material [11-15]. The aim of this study is to evaluate the heavy metals pollution in the inner rivers of the Basra governorate especially with cadmium, copper, nickel and lead. Isolation and identification of heavy metal resistant bacteria and determination of MTC, in addition to exploiting these bacteria to remove heavy metals.

A total of 12 samples of water from six rivers (Abu Al-Khaseeb, Al-Khora, Al-Saraji, Al-Ashar, Al-Khandak and Al-Rubat) in Basra governorate- Iraq (Figure 1). Samples were collected during the period October- November, 2013. The samples for bacteria were collected at a depth of 20 cm from the surface using 500 ml sterilized glass bottle, While the samples for heavy metals were collected using 1 liter polyethylene bottles. All samples transferred to an ice box and transported to the laboratory [16]. In order to determine the elements in water, 25 mL of sample was placed in a 250 mL digestion tube containing 5 mL of concentrated HNO3. The sample was heated at 80-90°C for 120 min, and then the temperature was increased gradually to 150°C at which the sample was boiled for at least 4 h until a clear solution was obtained. Concentrated HNO3 was added to the sample (5 mL was added three times) and digestion occurred until the volume was reduced to about 1 mL. After the digestion was completed, and the sample cooled, 5 mL of 1% HNO3 was added. The solution was filtered with Whatman No.42 filter paper. It was transferred quantitatively to a 25 mL volumetric flask by adding distilled water. The concentration of Ni, Cd, Cu and Pb in the final solutions were determined by an atomic absorption spectrophotometer (AAS) (phoenix-986, Biotec. UK) [16].

In the present study heavy metals resistant isolates were isolated from rivers water, by serial dilution and streaking method using nutrient agar. The isolates were incubated at 37°C for 24 h. Properties of the bacteria included, gram stains, catalase, oxidase, motility, Vogas- Proskauer, utilization of citrate, reduction of nitrate, fermentation of mannitol, lactose, mannose and acid from glucose tests were determined according to Holt et al. [17] and Kocur et al. [18].

The MTC of Cd, Cu, Ni and Pb were determined by agar diffusion methods [19]. Filter paper disks were saturated with heavy metals for 30 min, and then placed on nutrient agar plates and incubated for 72 hr at 37°C. Cd (NO3)2. 4H2O, Cu (NO3)2. 3H2O, Ni (NO3). 6H2O and Pb (NO3)2 used to prepare mother solution of these metals in sterile distilled water and were used in various concentrations [20]. The culture grows at a given concentration were then transferred to the next concentration. The MTC was done at 37°C for 72 h. All the experiments were carried out in triplicates and the results indicates the mean values.

The living biomass of Micrococcus sp. was used for removal of Cd, Ni, Cu and Pb. Bacterial isolates were grown in a nutrient broth at 37°C for 24 h. Cells were harvested by centrifugation at 6000 rpm for 15 min, and then washed with normal saline triplicates. 50 mg of cells was mixed with 50 mL of nutrient broth containing various metal concentrations (25, 50 and 100) μg mL-1 for each heavy metal. These cultures were incubated at 30°C for 24, 48 and 72 h, in shaker incubator, at 120 rpm, and pH 7 [21-23]. The cells were removed for each time by centrifugation at 6000 rpm for 15 min, and the supernatant prepared for measuring by AAS [24,25]. Treatment of metal by bacterial cells was calculated as the ratio of ions removal.

There are many reasons may increase the concentration of heavy metals in these rivers such as the paving of the bottom and both sides of rivers with stones (except Abu Al-Khaseeb river), the low level of water in the rivers as a result of the large amount of sediment in it, which led to the dumping, especially in point relates to the Shatt al- Arab, in addition to the use of them as channels for disposal of sewage and throwing the solid waste since 1988, and finally Abu Al-Khaseeb river is use for parking and maintenance of ships.

In the present study, two species were identified depending on their morphological and biochemical profiles (Table 2) as Micrococcus kristinae and Micrococcus halobius.

The MTC is the highest concentration of heavy metals that completely inhibited bacterial growth. M. halobius showed significant resistance to high concentration of Pb, the MTC was 2600 μg mL-1, while to Cd and Cu were 400 μg mL-1 for each (Table 3). On other hand, M. kristinae also showed significant resistance to Pb and the MTC was 2200 μg mL-1 and was 400 μg mL-1 and 300 μg mL-1 for Cu and Cd respectively. M. kristinae was more resistant to Ni from M. halobius (Table 3). This result agreed with Velusamy et al. [28] and Mgbemena et al. [29]. But is higher than those of Jaafar et al. [12-15] who observed that Bacillus thuringiensis could survive at 1800 mg g-1 of lead and less than Shewanella oneidensis which could survive at 1000 mg g-1 of Cd [15].

The high levels of resistance and the widespread tolerance that was found among the isolates is probably attributed to the high metal contents in the water [30]. All the isolates were tolerant to multiple metal ions. These changes in resistance may be a due the concentration of various heavy metals difference in the environment. The site from which the samples were taken has been contaminated with high levels of heavy metals for many years, perhaps giving a diverse range of bacteria the chance to adapt to the environment, either by convergent evolution of resistance mechanisms or transfer resistance genes through plasmid. The heavy metals resistance, including cadmium, copper, lead and nickel, often done for the bacteria plasmid and transposonen. It has been theorized that this allows the transfer in the environment [31]. 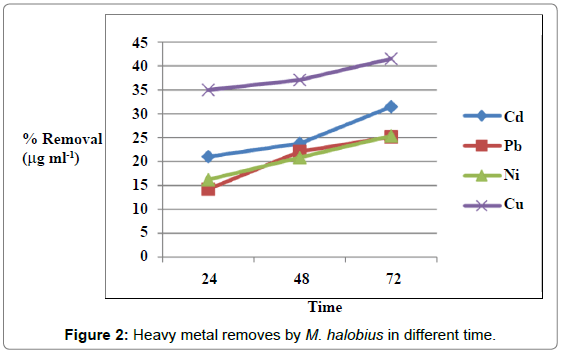 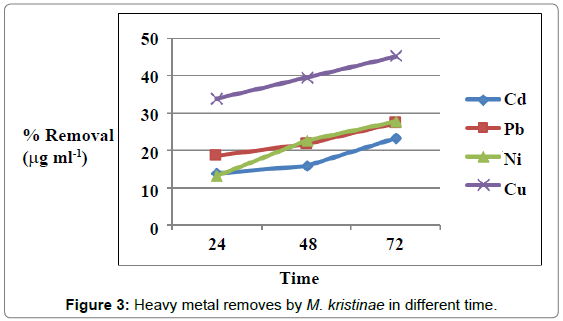 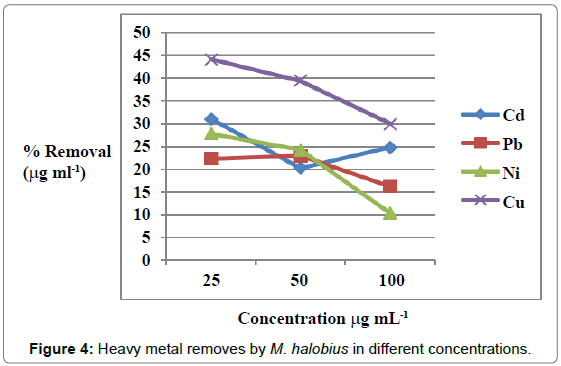 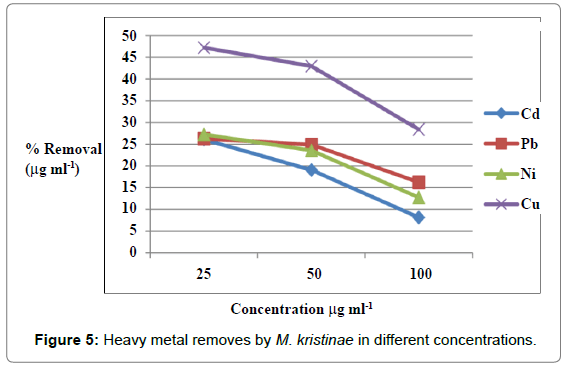 Contact time is one of the important factors of bioremediation process, and this is may be related to that, the highest rate of metal ion removing in the beginning is due to the high affinity of free metal ion binding sites to the active sites on the cell which provides ligand groups on which metal species may bind by different mechanisms. Major classes of microbial biopolymers, such as proteins, nucleic acids and polysaccharides, provide sites on which metal ions may bind. The ligand groups available include negatively charged groups, such as carboxylate, thiolate, or phosphate and groups such as amines, which often coordinate to the metal through lone pairs of electrons [12-15,32-34].

Mcrococcus sp isolated from polluted rivers in Basra city Southern Iraq, showed significant resistance to high concentration of Pb with the possibility of being exploited in bioremediation.