Tomato leafminer, Tuta absoluta (Meyrick) is considered to be one of the major pests of tomato crop in Ethiopia. In tomato, economic impact is caused by larval which feeding leaves and fruits. Information on tomato leafminer economic injury levels (EILs) and economic thresholds (ETs) is relatively limited. Studies were conducted during 2015 to 2017 to determine EILs and ETs on open field is required for more effective management. The results from the current studies significant (P<0.05) differences were observed among the treatments during the study periods. T. absoluta was highly infested the untreated control as compared with protected treatment. The mean value of marketable yield loss to the cost of insecticide application at one larva/plant was 3.61% and from untreated control was obtained 77.91% during 2015/16. Similarly, during 2016/17 at one larva/plant and untreated control marketable yield loss were observed 5.57% and 81.61%, respectively. The highest yield loss was observed at unsprayed control (24,577.84 kg/ha) followed by five larvae/plant (10,587 kg/ha) during 2015/16 while during 2016/17 the highest yield loss also observed in untreated control (26,593.08 kg/ha) followed by five larvae/plant. From this study the economic injury level of T. absoluta was 3.82 larvae per plant. Therefore, based on economic injury level, the economic threshold level was determined as at 2.87 larvae per plant.

Tomato, Lycopersicon esculentum (Miller) (Family: Solanaceae ) is an important vegetables crop of Ethiopia. It is widely used in salad as well as for the culinary purposes. The popularity of tomato and its products continue to rise as it contains a significant source of Vitamins A, B and C [1]. Tomato is devastating by an array of pests; however, the major damage is caused by the Tomato fruit borer, Helicoverpa armigera (Hubner) (Lepidoptera: Noctuidae) and tomato leafminer, Tuta absoluta Meyrick (Lepidoptera: Gelechiidae). The Larvae of this insect pest reduce tomato yield 80 to 100% fruits were found to be damaged by this insect [2]. In very recent year, in Ethiopia T. absoluta is one of the most important and serious pests of tomatoes [3].

Regular monitoring is of paramount importance in IPM to ensure timely intervention before economic damage occurs, thereby saving farmers unnecessary cost. The functional relationship between pest infestation levels and benefit from control measures can be visualized as a benefit plane that shows increasing benefit with increasing infestation levels of either pest [6]. It is thus important to determine economic injury level for effective management of pests to prevent avoidable yield losses. With this background, the present study was conducted to determine the larvae of T. absoluta economic injury and economic threshold level in tomato under open field.

The experiment was carried out at West Shawa of central Ethiopia under open farmer’s field during dry seasons of 2015/16 and 2016/17 using natural infestation by different levels of larval population to establish the economic injury levels of Tuta absoluta . The ETL was determined based on economic injury level and benefit cost ratio as suggested by Farrington [7]. The experiment was laid out in randomized complete block design (RCBD) with three replications. There were seven treatments consisted of six different larval densities i.e., 0, 1, 2, 3, 4 and 5 larvae per plant. When the number of larvae reaches each treatment spray with standard chemical was sprayed accordingly. The number of total and damaged leaves and fruits were counted and fruit yields weighed from each treatment. Relationship between the larval densities and the number of leaf and fruit damaged was worked out by correlation co-efficient and regression equations. Yield losses due to different treatments were derived by deducting the yield of the respective treatment from the yield of control (where no egg and larva protected treatment). The value of yield losses was determined according to the wholesale market price of tomato at current market situations.

Regular periodical counts of the T. absoluta (eggs and Larvae) and number of damaged (leaves and fruits) were taken from 10 plants in each plot, where the leaves and fruits had checked for larvae. However, when the sprayable level was attained, the plots were sprayed one day later with the appropriate insecticides, according to the pest situation. Spraying was carried out using a knapsack sprayer. Finally yield data was taken to compare the treatments.

The collected data for each treatment was subjected to analysis of statistical software package [8] was employed for analysis of variance of the experiment. The economic injury level for T. absoluta larvae were calculated by fitting regression equation Y=a+bx, between larval population levels and Benefit Cost Ratio. The larval density corresponding to unit Benefit Cost Ratio was the economic injury level and economic threshold levels were set at 75% of EIL [9]. 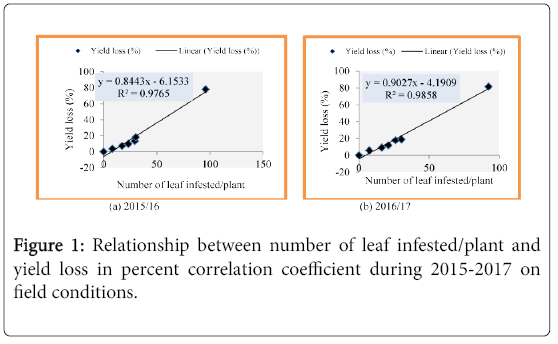 Figure 1: Relationship between number of leaf infested/plant and yield loss in percent correlation coefficient during 2015-2017 on field conditions. 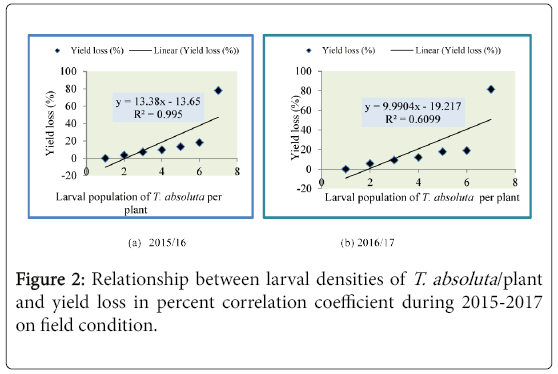 Figure 2: Relationship between larval densities of T. absoluta /plant and yield loss in percent correlation coefficient during 2015-2017 on field condition.

A linear relationship between tomato yield and larvae of T. absoluta per plant was detected on field during 2015-2017. There was a significant linear relationship between larval infestation and marketable yield loss when tomato fruit and leaf were infested in larvae (Figures 2 and 3). The correlation between the observed and predicted values of marketable fruit weight was calculated for each data set to assess the fit of the model. However, the economic injury level (EIL) is often expressed mathematically by the following formula: 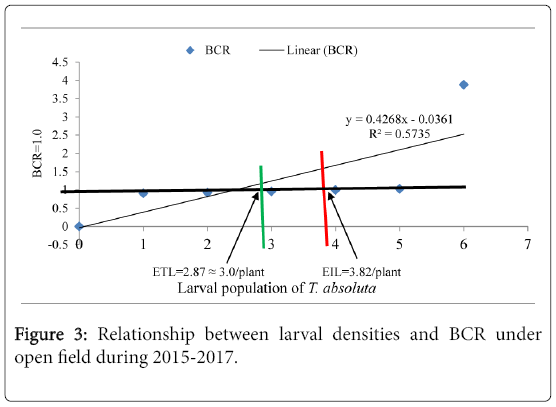 Figure 3: Relationship between larval densities and BCR under open field during 2015-2017.

"C" is the unit cost of controlling the pest (Birr/plant)

"V" is the unit value of the commodity (Birr/plant)

"I" is the percentage of the commodity unit injured (% loss)/plant

From the above equations the EILs of T. absoluta larvae determined as three larvae during 2015-2017 (Figure 3). On the basis of means of two years, the EIL value was 3.82 larvae per plant under field conditions. Therefore, the economic threshold level was determined as 2.87 larvae per plant.

The economic threshold levels were developed from EILs, expressed as the percentage of infested plants at least three larvae/plant (Table 4). Larval survival was incorporated in the ET calculation considering the range of larval survival observed during 2015-2017.

Cost of management reflects a range of actual price scenarios in current market price. Crop value considers a range of crop market price for the period of 2015-2017, including low, average, and high prices of tomato.

Table 5: Frequency of insecticide application on management of T. absoluta on tomato crop in Western Shawa of central Ethiopia on field during 2015-2017. Note: ** ETL * EIL.

The experiment was conducted to uses control costs, crop value and plant-monitoring results marketable fruit loss to calculate an injury level for leaf infestation and fruit damaged. Number of larvae was indicates that initiated control prevented pests from causing economic injury while number of larval population rate above the limit indicates that the economic threshold was inadequate to prevent an increasing infestation from causing economic damage.

The ElL is the most persistent and influential element in pest management. Indeed, ElL and ETL continue to function as the primary mechanisms for making pest management decision [10]. Various workers [4,11-13] highlighted the importance of ElL and ETL in the pest management of different crop plants. According to Pedigo and Higley [14] to recapitulate the primary variables to define the ElL is not a discrete pest density, but is variable depending on control costs, the value of the production protected, production losses per pest, and the efficacy of the control. It should be noted that estimate of damage caused by pests rather than pest density is especially important for tomato leafminer, T. absoluta .

Currently, no any report on economic threshold level of T. absoluta globally. There are different damage indices and developmental stages have been used by different authors to estimate the economic injury and economic threshold level on different crops and different insect pests. For instance, Bahrami et al. and Naranjo et al.[15,16] studied the number of insects per bush for the sunn pest, Eurygaster integriceps (Hem: Scutelleridae) and the whitefly, Bemisia tabaci (Hem: Aleyrodidae), respectively, while Jemsi [17] used the density of pest on surface unit to estimation the economic injury level in the grain leaf miner Syringopais temperatella (Lepdoptera: Elachistidae). Reddy et al. [18] found that EIL of other lepidopteran insect, Helicoverpa armigera in pigeon pea was 0.78 to 0.80 larvae per plant and also Nath and Rai [19] reported EIL of gram pod borer under natural condition to be 1.77 to 2.00 larvae per m row length was determined. Furthermore, Prabhakar et al. [20] found EILs of chickpea pod borer were 0.9 and 1.23 larvae per m for unirrigated and irrigated crops, respectively. However, our method is different and easily applicable for tomato leafminer, T. absoluta management. We used the number of larvae per plant to simplify the observation and exact estimation of the economic injury level. This index can easily be used by farmers to estimate the intensity of damages on their tomato fruits and develop management options using their available materials.

Copyright: © 2017 Shiberu T, et al. This is an open-access article distributed under the terms of the Creative Commons Attribution License, which permits unrestricted use, distribution, and reproduction in any medium, provided the original author and source are credited.