There are various different experiments going on all around the world to achieve the high efficiency of collector and this research paper is based on experimental study on the performance evaluation of Parabolic Trough Collector (PTC), which is associated with the use of ethylene glycol and distilled water based mixture as working fluid. It has been observed from experimental studies that the overall thermal efficiency of PTC with the use of a mixture at 100 L/h found to be 6.4%, which is much higher than the efficiency outcome at 160 L/h around 5.89%. Moreover, this paper also demonstrates the experimental evaluation of thermo physical properties like thermal conductivity, density or specific gravity and viscosity of the ethylene glycol and distilled water based mixture.

Cp1=Specific heat of water in

Cp2=Specific heat of ethylene glycol in

Tout=Outlet temperature of mixture in °C.

Tin=Inlet temperature of mixture in °C.

Rb=Bond resistance and taken as ‘1’.

ηth=Thermal efficiency of the mixture.

The utilization of solar energy is a possible and effective way to reduce the shortage of the energy and for the conservation of the environment. It has been seen that energy provided by renewable energy sources up to 19.1% of total energy consumption globally. Today solar heating systems are widely known throughout the world for hot water supply in the domestic areas and the total solar hot water heating capacity based on solar thermal collector was estimated at 373 GW globally up to the end of 2013 and it expands up to 406 GW by the end of year 2014 [1]. There are abundant researches going on throughout the globe in the area of low temperature and medium temperature solar thermal technologies like solar refrigeration and air conditioning, solar power generation by concentrating and non concentrating solar thermal technologies especially for industrial process heating. Therefore, further studies and developments in the solar thermal collector technology to enhance the growth of solar thermal applications are necessary.

Solar radiations are directed toward solar thermal collectors, which are captured and absorbed by the selective coating on the collector’s receiver tube and finally transferred to the Heat-Transfer Fluid (HTF) flowing inside the tube. There are many studies regarding the formulation of the performance of solar thermal collectors and optical properties of the nano-fluid mixture in which nano-particles are suspended in water or ethylene glycol. The efficiency of flat plate collector could be improved up to 5% by using a mixture of the water and various nano particles like carbon nanotubes, graphite and silver [2]. In another study formulation of the optical behavior of single-wall carbon nanohorns and ethylene glycol based mixture for solar heat absorption applications were discussed [3]. Multiwall carbon nanotubes (MWCNTs), poly (ethylene glycol) (PEG) and inorganic SiO2 can be used to fabricate the high thermal conductivity carbon nanotube, Poly Ethylene glycol and inorganic SiO2 composites. Therefore, these composites can be effectively utilized for the efficiency improvement of solar devices [4]. Furthermore study related to investigating the performance of nanofluid based low temperature Direct Absorption Solar Collector (DAC) by using water and aluminum nanoparticles mixture. Finally, the results of the study concluded that with 1% volume fraction of aluminum nanoparticles in water considerably improves the solar absorption capacity and also found that the minimal effect of particle size on the optical properties of nanofluid [5]. On the other hand, performance of a gas-based type nanofluid using solar parabolic trough collector coupled with transparent receiver can be formulated for the achievement of high-temperature around 650°C [6]. Moreover, theoretical and experimental investigation of novel Nanofluid-based Direct Absorption Solar Collector (NDASC) and its operating characteristics for medium-temperature solar collection concluded that the temperature distribution of the CuO/oil nanofluid in the NDASC was much more uniform and higher efficiency than that in the Indirect Absorption Solar Collector (IASC) [7].

Solar Parabolic Trough Collector (SPTC) is a prominent and promising way to generate the electricity along with used for other applications with 400°C operating temperatures [8]. An experiment is conducted to determine the performance of different components of the parabolic trough collector and all research programs was performed at Mangosuthu Technikon’s STAR Lab for low temperature testing by using water as working fluid for PTC system. In this research program, evacuated and non evacuated glass covered receiver tube were tested. At high temperature, glass covered receiver tube brings out better results from research work [9]. After reviewing all these past researches, it has been observed that many types of studies are available and going on today related to enhance the performance of the solar thermal collectors. The aim of current research is also to enhance the performance of solar parabolic trough collector by using ethylene glycol in different proportions with distilled water along with evaluation of the thermo physical properties experimentally. Therefore the current study is original and valuable according to research point of view.

Parabolic trough collector’s experimental set up includes the stainless steel collector sheet in a parabolic shape, mirror strips are used as a parabolic reflector, glass tube for vacuum creation and most importantly receiver tube which is made up of copper to absorb the highest amount of solar flux apart from these thermometer used to sense inlet and outlet temperature, ball valve for variation of volume flow rate, insulated storage tank with the capacity of 8 L, piping to flow the mixture of distilled water and ethylene glycol, manual tracking system for tracking the solar collector in east to west direction with the movement of sun, proper insulation used on the piping system to prevent heat loss from working fluid and a pump of 18 W power used to circulate the water through the pipes and from the copper tube at certain height.

Table 2: Variation in temperature difference with change in time at 160l/h.

Table 3: Variation in temperature difference with change in time at 100l/h. (A) Specific heat for mixture of ethylene glycol and water based mixture:

Finally the specific heat of mixture by using all the relative data.

(B) Useful heat gain by the parabolic trough collector [10].

(C) Thermal efficiency (ηth) of the mixture of ethylene glycol and water [11].

(E) Instantaneous energy production (Eint) of the mixture of ethylene glycol and water [11].

Table 5: Shows change in experimental density with change in temperature. 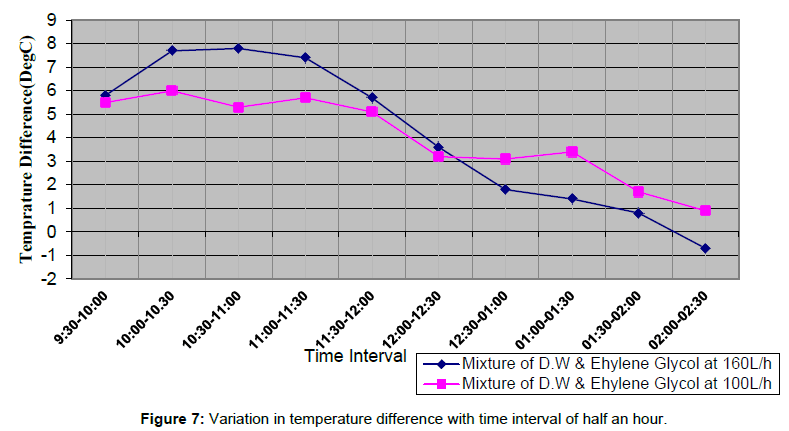 Figure 7: Variation in temperature difference with time interval of half an hour. 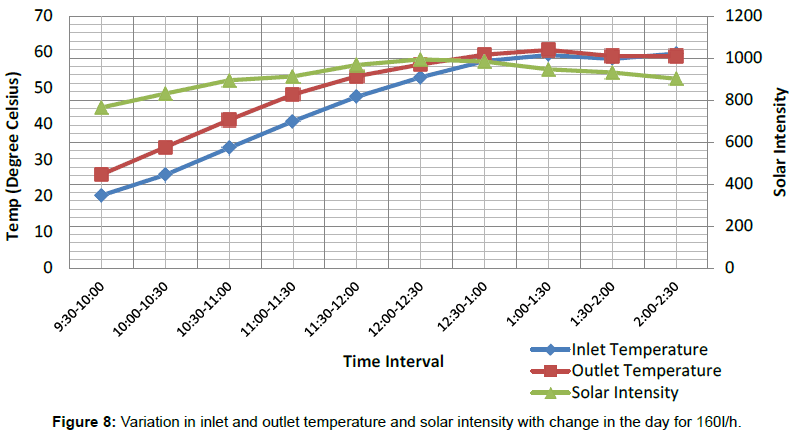 Figure 8: Variation in inlet and outlet temperature and solar intensity with change in the day for 160l/h. 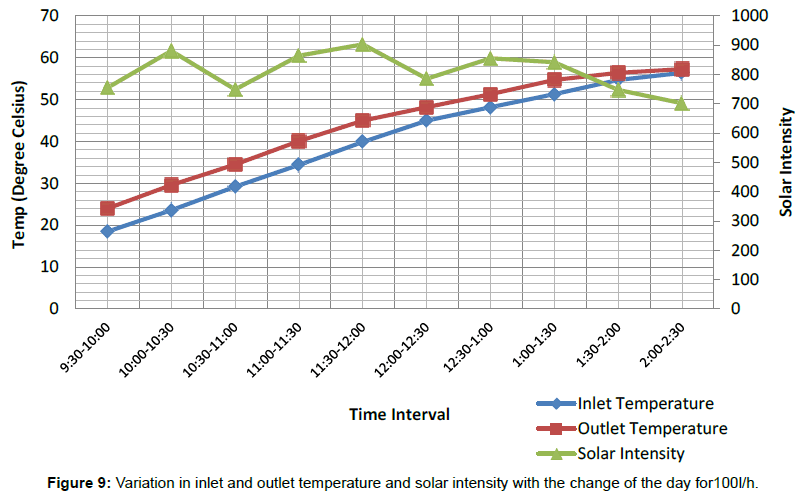 Figure 9: Variation in inlet and outlet temperature and solar intensity with the change of the day for100l/h. 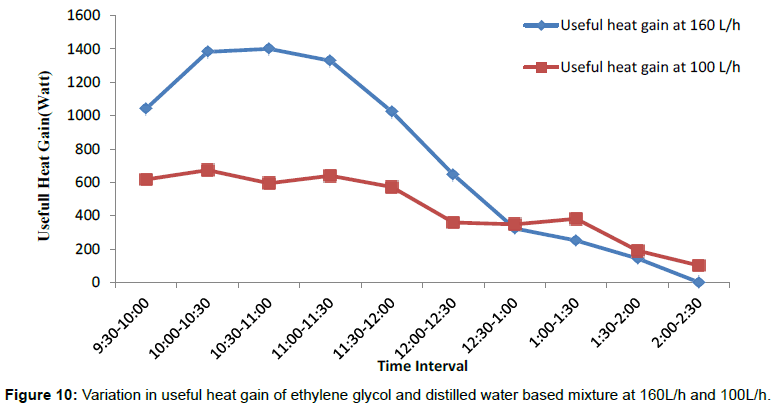 Figure 10: Variation in useful heat gain of ethylene glycol and distilled water based mixture at 160L/h and 100L/h.

Figure 11: Shows the variation in thermal efficiency of ethylene glycol and distilled water based mixture at 160L/h and 100L/h.

1. Useful heat gain and instantaneous energy production show same results for both 160 L/h and 100 L/h but thermal efficiency for 160 L/h shows better results as compared to 100 L/h up to the middle of the day.

3. Density and kinematic viscosity of mixture decreases as well as temperature increases.

This research acknowledge the funding support of Department of mechanical, industrial and automobile engineering of Delhi Technological university, New Delhi. In addition as an author, I am very grateful to Dr. Kundan lal, Assistant Professor of Thapar University (Patiala) for allows me to conduct experimental work on the PTC collector system and also thankful for his guidance throughout the experimental procedure.

Copyright: © 2017 Singh H, et al. This is an open-access article distributed under the terms of the Creative Commons Attribution License, which permits unrestricted use, distribution, and reproduction in any medium, provided the original author and source are credited.