Proper occlusal plane is an essential consideration to fabricate single complete maxillary denture. The determination of the occlusal plane can have profound effect on the short and long term success of a restorative case. To determine the appropriate occlusal curve for individual patients and to compare the deviation of the clinical occlusal curve with the ideal ones, we have fabricated customized BOPA. The inclination of occlusal plane straightly governs the balance of occlusion in complete denture. Any changes, even the slightest bit in the plane of occlusion will modify both the physical and functional relationship of the oral musculature, which will result in an alteration in the comfort, function as well as the aesthetic value.

In single complete denture, occlusion balance is most important. If it is not absolute, then it may lead to fracture of denture and uneven resorption of the residual bone [1-10]. To avoid all this, a device was invented whose name is BOPA (Broadrick occlusal plane analyzer) which is used to correct the occlusal plane of lower jaw. BOPA helps to maintain functional, occlusal and esthetic requirement. Basically, inclination of occlusal plane decides the occlusion balance [2]. A little change in inclination creates more discomfort to patient and also increases the rate of re-sorption. Originally BOPA had some definite attachments which were made to fix only to certain category of semiadjustable articulators. So, to overcome the difficulties, in this case, customized BOPA is constructed to fabricate maxillary complete denture. Failure to diagnose and properly modify the mandibular teeth to achieve occlusal harmony with the denture will result in forces that may exceed the physiologic tolerance of maxillary residual ridge tissues [3].

An instrument called as customised Broadrick flag can be adapted to any type of articulator with the help of its easy attachments that can accept a facebow mounting to the upper model which can be locked easily to any articulator‘s upper member [3]. The lower model must be mounted with a centric check bite record. Brodrick flag has been used to assist in reproduction of tooth morphology that is commensurate with curve of spee [6]. Care should be taken to ensure that the angle of condylar guidance is not less than the curve of spee, as this would introduce posterior protrusive interferences. George Monsoon proposed that mandibular teeth should be arranged to close around a sphere of 4-inch radius, with the mandibular incisal edges and cusp tips touching the sphere, thus permitting protrusive and lateral excursions free from posterior interferences [5].

A 56 years old male patient with upper edentulous arch, reported to Department of Prosthodontics, Carrier Dental College, Lucknow to replace his teeth for the purpose of mastication. All the remaining teeth were in good condition. The case was diagnosed for constructing Single Maxillary Complete denture (Figure 1).

Final Impression of maxillary and mandibular arches was made and Orientation relation made with the help of Face-bow (Hanau Springbow model) (Figure 2). After the lower model was mounted, the upper model should be removed and set aside for later use. The flag was secured to the upper bow of the articulator. Adjust bow compass to 4-inch radius. Anterior survey point (ASP) was than selected from cusp tip to disto-incisal line angle of mandibular canine. ASP was taken as disto-incisal line angle. An arc was scribed on the flag (Figure 3). Posterior survey point (PSP) was selected on disto-buccal cusp of distal molar. An arc was drawn on the graph with ASP and PSP and point of intersection determines the occlusal plane survey center [7]. It can be altered 1 cm forward and backward in order to establish an acceptable plane (Figure 3). Figure 3: An arc was scribed on the flag. Figure 4: Line was scribed on other side of the cast.

Fabrication of vacuum form sheet template was done by adapting over mandibular cast. After that it was trimmed with a sharp Knife up to the marked plane (Figures 5 and 6). Figure 5: Fabrication of vacuum form sheet template was done by adapting over mandibular cast. After that it was trimmed with a sharp knife up to the marked plane. Figure 6: Fabrication of vacuum form sheet template was done by adapting over mandibular cast. After that it was trimmed with a sharp knife up to the marked plane.

Remove the template from the cast and place in patents mouth. After the placement of the template, the portions of teeth that protrude through it are reduced with the use of tapered diamond points in a high – speed hand pieces [8]. 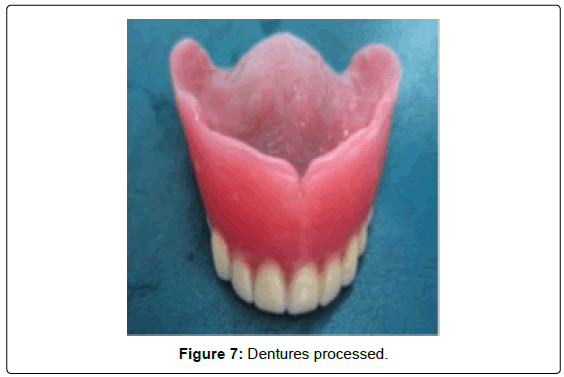 1. Natural teeth those are sufficient in number not to necessitate a fixed or removable partial denture.

2. A partially edentulous arch in which the missing teeth have been or will be replaced by a fixed partial denture.

3. A partially edentulous arch in which the missing teeth have been or will be replaced by a removable partial denture.

1. The edentulous ridge will have more stresses and strains placed on it than in the completely edentulous mouth.

8. Occlusal form: In single complete denture the occlusal form of natural teeth acts as a guide. In most situations this would be an anatomic (cusp) tooth but if natural teeth are abraded and are not restored piror to treatment the monoplane form may be of choice.

9. Tilted tooth: Due to mesial drifting the remaining natural teeth with no antagonists could get tilted creating a lot more problem. These can be reshaped by a selective grinding if mild tilt is present.

10. When more tilt is present a moderate amount of reduction is required which should be restored with cast gold crowns, onlays or a fixed bridge [4].

11. If a large edentulous area exists mesial to drifted tooth, then a removable partial denture can be designed with the mesial rest to restore the mesial half of molars and lowering the distal cusps.

12. Orthodontic repositioning can be considered.

13. If molars are severely tilted and supraerupted and modifications are not possible then it should be extracted.

14. Irregular occlusal plane: When there is early loss of maxillary teeth is not restorable, in such cases the mandibular arch will have two plane of occlusion, an anterior plane from canine to canine and a much higher posterior plane [10].

Problem could be resolved by

1. Reducing the steep cuspal inclination by rounding off the tips of the cusps.

2. Direct occlusal forces such that the stability of denture must not be hamper while performing masticating movements.

3. Narrowing the width of worn out, attrited teeth and abraded as wear results in increase of bucco-lingual natural teeth. This will centralize masticatory forces and increase denture stability.

Copyright: © 2017 Vijender K, et al. This is an open-access article distributed under the terms of the Creative Commons Attribution License, which permits unrestricted use, distribution, and reproduction in any medium, provided the original author and source are credited.