Speech is one of the vital signals of acoustic classification. Speech recognition is also significant and very well known of audio processing. Speech contains very important frequency information of human being. The features of Audio, especially speech signal may be extracted using FFT (Fast Fourier Transform) and Wavelet to detect the frequency information of the signal. But it is difficult to extract the changes of small variation of speech signal with time-varying morphological characteristics. So, it is needed to be extracted by signal processing method because there are not visible of graphical audio signal. In this paper, an improved wavelet method has been proposed to extract the precise detection of small abnormalities of both original and noise corrupted speech signal which are taken empirically by writing MATLAB program. The proposed wavelet method found to be more summarized over conventional FFT and Wavelet in finding the small abnormalities of audio signal.

Speech signal is a very important parameter for communication. Everyday audio is being transmitted through transmission medium from source to destination. Between sender and receiver, signal is also being processed by using a lot of method. When the audio signal is received, the extraction of frequency response is extremely needed. Since, audio is very susceptible to noise; hence it is required to extract specific frequency components. Fourier transform is very well known technique which transforms time domain signal to frequency domain to get the frequency coefficients. If small changes are appeared in the signal due to the effect of noise, Fourier transform does not perform well in that particular case, because FFT coefficients do not carry time information. Short time Fourier transforms called windowing may be used to overcome this problem which has both time and frequency information. But the problem is the size of the window which is limited to all over the frequency. So, still there is a significant chance of ignoring a large amount of coefficient. The statistical properties of audio signal are generally changed over time. Recently wavelets have been used in a large number of audio applications. The wavelet packet method is a generalization of wavelet decomposition that offers a rich range of possibilities for signal analysis. Wavelet contains both time and scaled version. In order to extract the small changing coefficients which may understandable for users, wavelet has found to be more précised. The multi-resolution framework makes wavelets into a very powerful compression [1] and filter tool [2], and the time and frequency localization of wavelets makes it into a powerful tool for feature extraction [3,4]. There are some works on speech processing using FFT and wavelet [5-9]. Oktem et al. proposed the signal denoising in Transform Domain and Wavelet Shrinkage [5]. Ghael et al. improved a wavelet denoising method via Empirical Wiener Filtering [6]. Harma et al. discussed the benefits of the use of logarithmic frequency representation are demonstrated with harmonic signals. They also discussed how linear filters can be designed and implemented directly on a logarithmic frequency scale [7]. Lippe et al. approached a faster machine, and with suitable implementation for frequency-domain processing, real-time dynamic control of high-quality spectral processing that can be accomplished with great efficiency [8]. Popescu et al proposed a method to determine features of music in a combined framework using multi-resolution (wavelet) analysis and spectral analysis in order to realize the classification of musical pieces [9]. Most of the works focused on the large size abnormalities with respect to extreme noisy channel using conventional FFT and wavelet method. Most of the useful information in the signal is found in the intervals and amplitudes defined by its features (characteristic wave peaks, frequency components, and time duration). In this paper, FFT and wavelet methods are developed for the extraction of small variations of the audio signal. The proposed Wavelet method of signal processing is found to be superior to the conventional FFT and wavelet method in finding the small abnormalities of audio signals.

Audio signals both original and noise corrupted have been taken empirically. These signals are analysed by the Fourier transform as well as wavelet method (MATLAB wavelet Tool). Continuous wavelet transform (CWT) is defined as the sum over all time of the signal multiplied by scaled, shifted versions of the wavelet function ψ.

The results of the CWT are many wavelet coefficients C, which are a function of scale and position. Multiplying each coefficient by the appropriately scaled and shifted wavelet yields the constituent wavelets of the original signal.

For many signals, the low-frequency content is the most important part. It is what gives the signal its identity. The high-frequency content, on the other hand, imparts flavour or nuance. To gain a better appreciation of this process, it is performed a one-stage discrete wavelet transform of a signal. The decomposition process can be iterated, with successive approximations being decomposed in turn, so that one signal is broken down into many lower resolution components. This is called the wavelet decomposition tree.

The original audio signals and noise corrupted signal have been implemented using FFT and wavelet for proper feature extraction. Very low frequency signal with small level of amplitude may cause the creation of sinusoids that may hamper the normal audio pattern which is may be resulted small abnormalities. The flow chart and algorithm have been given of the program with different parameters in below. The following flow chart (fig.2) and algorithm have been used to evaluate the simulations output which are given step by step. 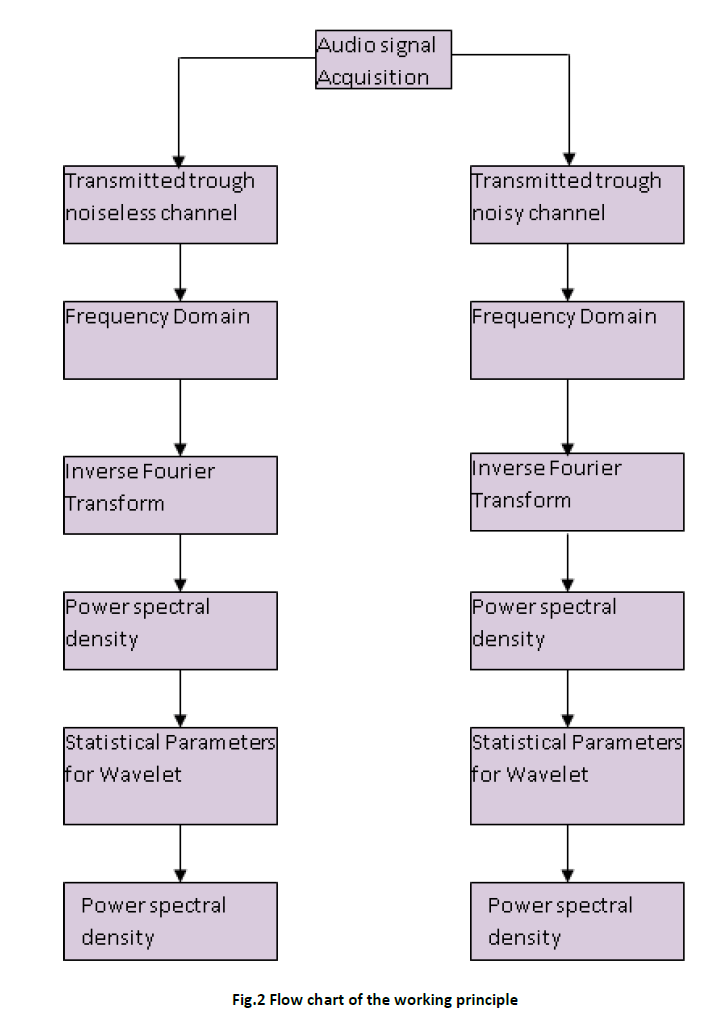 Some important steps of the proposed algorithm have been described in below.

Step 2: Audio signal is transmitted through noiseless and noisy channel

Step 4. Signal is interpolated using IFFT both for original and noise corrupted signal

Step 5. Power spectral density is measured both for original and noise corrupted signal

The FFT comparison of original and small noise corrupted signal are simulated which is shown in Fig.3 and it cannot be identified the abnormalities using conventional FFT method. Fig.4 and 5 shows the data histogram of wavelet output of the original signal and noise corrupted signal. Fig.3 shows the result of original audio and small noise corrupted signal which are simulated using FFT algorithm but have not found any significant changes. So it is obvious that the Fourier method, especially for this purpose does not convey an important issue to the paramedics to get a decision. On the other hand, if wavelet is considered to demonstrate the same challenges, significant changing features are extracted from where paramedics get some particular decisions to comprehend the users. Table 1 and 2 shows the statistical value which are taken by the generation of program and show the differences between original and noise corrupted audio. 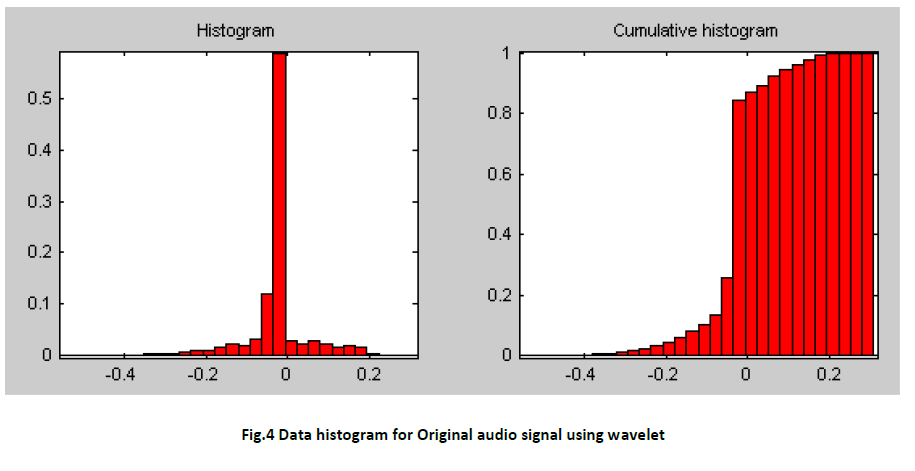 The general histogram and cumulative histogram of original signal using wavelet have been given in Fig.4.

The general histogram and cumulative histogram of noise corrupted signal using wavelet have been given in Fig.5.

The power spectral density is also considered to find out the changes of the abnormalities. The power spectral density of both cases is also shown in fig.6 using wavelet. And the frequency versus coefficients level for original and noise corrupted signal shows the dissimilarities clearly. The different values of data and graphical comparison prove obviously that wavelet has improved the feature extraction technique in finding the small abnormalities of audio signal. 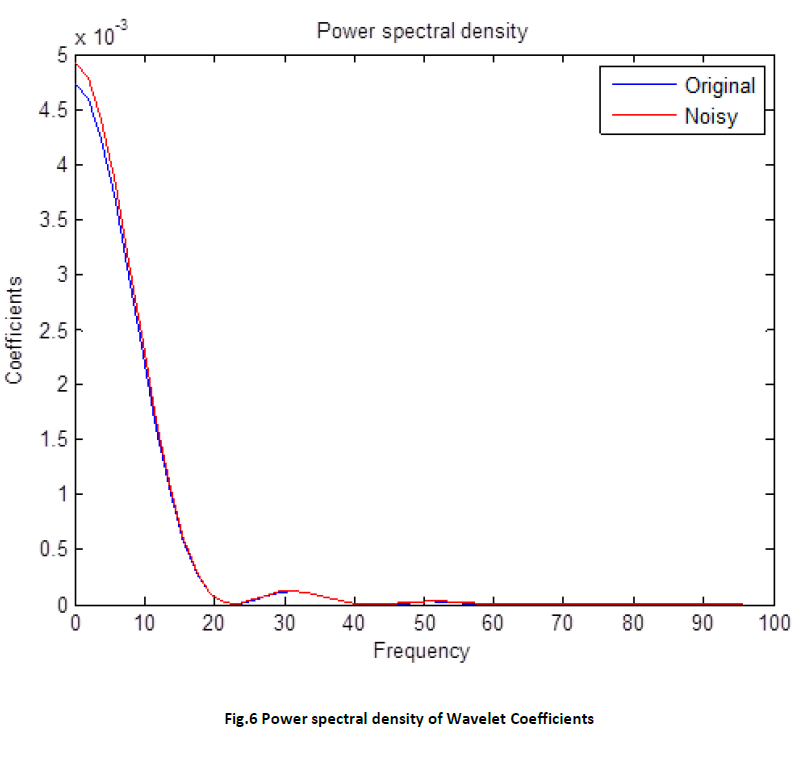 Audio signal has been acquired in real time and the small noise of amplitude is added with the original signal. Both signals have been tested and evaluated by using FFT and wavelet method. FFT has not performed significantly to extract the small changes of the noise corrupted signal. In this paper, wavelet has been introduced to overcome this problem and a significant change has been found to understand the existence of the signal which is better than the conventional technique.