Alluvial fans are among the most prominent landscape features throughout the semi-arid and arid regions of the world. The importance of developing qualitative and quantitative understandings of hydraulic processes on these features primarily comes from the rapid and significant development that has taken place on them in the American Southwest over the past four decades, development that is continuing and whose pace may be accelerating. As development and unplanned urban sprawl moved from valley floors onto alluvial fans, the amount and seriousness of damage incurred from infrequent flow events has dramatically increased. Whether the development on alluvial fans is planned or unplanned, seems to make little difference because we have an inadequate understanding of both the size of the flood events that might be expected and how they will behave when they occur. This study has tried to use the guidelines suggested by FEMA (1989) for flood zonation hazard of Kordan Alluvial Fan. While specifying the limits of the Kordan Alluvial fan and stream, in its active and inactive areas, the width and depth of one hundred-year flood is calculated using the Fan Program software and delineated maps of flood zones. This zonation showed that the most dangerous regional flood zoning is located at the head of the alluvial fan area with residential landuse (Kordan Village), therefore, protection of this area is highlighted.

Alluvial fan is cone or funnel-shaped deposit that is formed at the periphery of the mountains and its thickness and extent decreases from the mountain to the plain [1]. On the other hand, alluvial fans are sensitive areas because they are constantly changing and have unstable flow patterns on them. Lack of sufficient awareness of floodprone areas and flood risk on alluvial fans causes great financial losses every year [2]. In United States of America a main reason to investigate infiltration processes in alluvial fan is the fact that arid and semiarid areas are considered as highly desirable locations for storage or disposal of hazardous and radioactive waste disposal [3]. Another reason for investigation infiltration processes in alluvial fan is that in many arid and semi-arid areas, the main source of drinking water and ground water is alluvial fan [4,5]. Given the increasing trend of flood damage in Iran, identifying high risk areas, prone to flooding (such alluvial fans) is essential. Due to variations of climate, the amount and type of tectonic changes, lithologic units, vegetation and landuse in the upstream watershed, the behavior of and flooding in alluvial fans are very variable. Acknowledging this diversity, Federal Emergency Management Agancy [6] has developed a method considers regionspecific conditions on alluvial fans for identification and mapping of flood hazards. This approach was introduced as a Fan Program model to predict flood on alluvial fans and is a first registered guide for determining flood hazards on alluvial fans that is based on Dawdy theory [7]. According to this theory, each point in active alluvial fans may be subject to flooding. Based on scientific observations, alluvial fans floods are more dangerous than river floods, because flow on alluvial fans is unpredictable. Therefore, flood hazard zonation in alluvial fans and flood mitigation are very important [8].

1. FEMA Center in 1989 proposed Fan Program probabilistic model for flood forecasting in alluvial fans. FEMA instruction assesses the extent of flood risk in relation to flood with a return period of 100 years (i.e., one percent per year). FEMA instruction predicts flooding in three following steps: Step 1-Identifying the presence of alluvial fans in the study area (using satellite images and field surveys), Step 2-Identification of active and inactive zones in alluvial fan (using aerial photos, satellite images such as Google Earth), Step 3-Determining and identifying areas within the designated 100-year flood (according to the output from Fan Program software, these areas are mapped in GIS software), Finally, this model predicts flooding with a return period of hundred years in the alluvial fans by calculating the width, depth, discharge and other characteristics. Fan Program model requires a few input data and this is the privilege of this model. Based on FEMA instruction, the development of alluvial fan is caused by changes of its surface over time which produces the flood affected areas (active areas) while other parts are located outside of flood risk areas (inactive areas).

2. Dawdy [7] based on data collected within the waterways and flooding over the alluvial fan, concluded that every point on active alluvial fan may be at risk of flooding and flooding varies over time. This should be considered in analysis of flood risk.

3. Mollaii et al. [2] for flood risk mapping in Frizi Alluvial Fan, used hydraulic model and geomorphological data and then combined the results of Fan Program model with output from other models such as HEC-RAS.

7. Pelletier et al. [12] assessed the risk of flooding on alluvial fans using numerical modelling, field mapping and remote sensing and map of flood hazard was prepared. They stated that by combining this map with geological map, the alluvial fan flooding can be assessed.

The study area is Kordan Alluvial Fan, located in Savojbolagh City (west of Tehran, northwest of Karaj), its distance from Tehran is 45 km. It lies between 50° 45' and 51° 6' E longitude and 35° 50' to 50' 36° N latitude (Figure 1). The majority of Kordan Alluvial Fan lies in Savojbolagh region with its buildings and agricultural and horticultural activities. Therefore, alluvial fan flood zonation is important in this area. The stages of study are as follows:

2. Analysis of data of the selected station.

5. Selecting the best statistical distribution for the return periods (Weibull Distribution) in HYFA Software that covered 8 to 100 years discharges (Table 1).

6. Entering the return periods with other information needed to run the Fan Program Software.

The other data which are needed to run the model, are avulsion factor, alluvial fan slope, roughness coefficient, etc. They were computed and prepared for the model. Step 3: Defining and characterizing areas of the fan affected by the 100-year flood.

The steps 1 and 2 are performed using geological and topographical maps of the area Google Earth and according to the surveys [13].

Finally, the third stage is determined by analyzing the output from a hundred-year flood zones using Fan Program Software.

After entering data into Fan Program Software, outputs needed were achieved, as shown in the results of the FAN model (Table 2). The values of energy, depth of flooding, speed, likelihood of discharge at the head of alluvial fan and countor width were calculated. Then, by using the information that were obtained from the model (depth, velocity, flood discharge) and with the contours width and corresponding depth, flood zonation map was prepared in GIS (Figure 3). 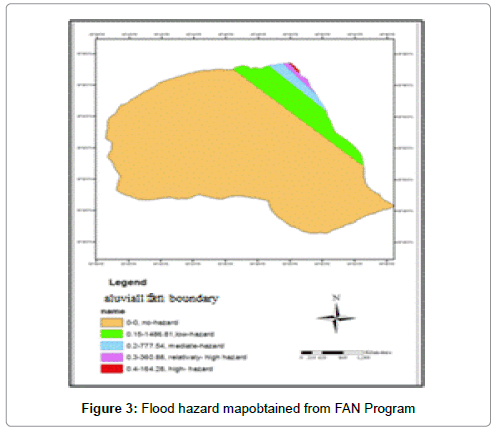 Table 2: Output of the FAN Program.

As shown in Figure 3, flood hazard areas are divided into several zones. From apex to downstream of alluvial fan, the depth of flooding has decreased and width has increased. This is in consistent with the results of the Mollaie et al. [2]. For example, the range of 0.4 to 164.28 means the zone of floodplain with 4.0 meters depth and 164.28 meters width with high flood hazard that is marked in red color on the map. This zone is also the first priority in respect to management because it is located at the head of alluvial fan and the hazard zones mostly overlap with urban and residential areas. In addition, in some areas shown in Figure 2, flooding is likely to cause damages to residential areas and agricultural lands. It is clear that the management of these areas should be emphasized. These results are is consistent with Ghavasieh and Esfahanikhan [14] results. Also, alluvial fan soils and sediments are suitable for agriculture and the majority of these features are located near river channels. Therefore, flood hazard is important in this respect too. Farmers suffer from flood hazard each year and suitable biological and structural measures should be taken for flood hazard control. FAN model also delineates the active and inactive parts of channel, predicts the probability of flood on alluvial fan and measures the avulsion of alluvial channel [5]. Therefore, by using this model avulsion of channel is predicted and can be controlled and managed. Also, according to the results of Field [11], alluvial fan floods will change the landscape dramatically. In their study, large and small floods on alluvial fans were identified as important factors in changing the landscape. He surveyed avulsion into of channels in alluvial fans and observed that avulsion was not random event in space and time. Its occurrence is controlled by the relative position of the lower bank of the main channel and minor channels in alluvial fan. As a result, the status and future avulsion of channels can potentially be used to improve flooding risk assessment in alluvial fans in urban areas.

Copyright: ©2015 Feiznia S, et al. This is an open-access article distributed under the terms of the Creative Commons Attribution License, which permits unrestricted use, distribution, and reproduction in any medium, provided the original author and source are credited.