Copyright: © 2014 Vanessa K. Hinson et al. This is an open-access article distributed under the terms of the Creative Commons Attribution License, which permits unrestricted use, distribution, and reproduction in any medium, provided the original author and source are credited.

Freezing of gait (FoG) is a debilitating condition experienced by Parkinson’s disease (PD) patients whereby they are episodically unable to walk despite their intention to do so. Early, it may occur in the OFF state, and responds to dopaminergic therapy and deep brain stimulation (DBS). FoG can also occur in the ON state, termed non-levodopa responsive FoG (NLR-FoG). The objective of this study was to determine the effects of a forced exercise treadmill protocol on NLR-FoG in patients with PD that had undergone DBS. We recruited five patients to complete a progressive treadmill-training program for six weeks. The freezing of gait questionnaire (FoG-Q) was the primary outcome measure. Patients also completed diaries documenting the number of freezing episodes and falls, the gait and falls questionnaire (GFQ), as well as PD motor and balance assessments pre and post treatment. Objective assessment of spatiotemporal gait parameters were also collected pre and post treatment. We did not see a significant difference in the FoG-Q pre and post treatment. We did see improvements in the MDS-UPDRS in 4/5 patients, and improvements in falls and freezing as measured by diaries in 3/5 patients. Improvement in spatiotemporal gait parameters beyond the minimal detectible change was seen in 2/5 patients. In conclusion, we found that a progressive forced exercise protocol is feasible in patients with PD post DBS, but response to treatment was not uniform. Further larger studies to elucidate factors predictive of response in this patient population are warranted.

Freezing of gait (FoG) is defined as the episodic inability to produce effective stepping [1]. FoG commonly occurs when patients with Parkinson’s disease (PD) wear off from their dopaminergic medications. This type of freezing (OFF-FoG) is treated by strategies aimed at eliminating wearing off (including deep brain stimulation or DBS). OFF FoG responds well to available treatment, and is therefore not a therapeutic challenge [2,3]. Unfortunately, FoG can also occur in the ON state. This type of FoG is not responsive to dopaminergic therapies (termed non-levodopa responsive FoG or NLR-FoG) or DBS, and there currently is no effective therapy [1]. In general, FoG that occurs in patients who have undergone successful DBS is not levodopa responsive, making this population a good model to study NLR-FoG.

The objective of our study was to determine the effects of Forced Exercise treadmill walking on NLR-FoG in patients with PD post sub-thalamic nucleus deep brain stimulation (STN-DBS).

Five subjects with a diagnosis of PD as determined by the UK Brain Bank Criteria were recruited for the study through a tertiary care Movement Disorders clinic. Patients between the ages of 40–75 with successful STN DBS implantation, on stable PD medications and STN DBS programming for >3 months were included. Patients had to have witnessed FoG at screening visit, and a mini-mental status examination (MMSE)>27 to exclude dementia. All patients underwent cardiac clearance including a pre-study exercise tolerance test in the Motion Analysis Laboratory monitored by a cardiologist and lab technician.

Subjects participated in a Forced Exercise protocol consisting of progressive split-belt treadmill walking on a Sports Art motorized treadmill 3 times a week for 6 weeks. The training protocol replicated prior treadmill training in a similar population [7]. Each subject’s over ground walking speed is measured to determine initial gait speed at which the treadmill will be set. Initially, gait speed is 80% of self-selected, and it is increased to a goal of 5-10% above self-selected speed, as determined at the beginning of each visit. If subjects are unable to progress, they remain at previous tolerable level. A non-weight baring safety harness is worn at all times while on the treadmill.

Freezing of gait questionnaire (FoG-Q), Gait and falls questionnaire (GFQ), MDS-UPDRS, and patient diaries on freezing and falling episodes were administered at baseline and 2 weeks after completion of the study protocol (final study visit). Diaries were administered weekly, starting with baseline visit, and ending with diary data collection at the final study visit. Patient diaries collected data on the number of freezing episodes/day, and triggers for freezing (doorways, turning, change in flooring, narrow space and dual tasks). Diaries also recorded information on number of actual participant falls/day and near-falls. In order to ensure accuracy of the data collected, the definitions of freezing, actual falls and near falls were reviewed with the subjects prior to completing the diaries. Freezing was defined as: an episodic inability (lasting seconds) to generate effective stepping, in the absence of any known cause other than parkinsonism or high-level gait disorders, most commonly experienced during turning and step initiation but also when faced with spatial constraint, stress and distraction. Actual falls were defined as the subject actually falling to the ground, and near falls were defined as starting to fall but able to capture themselves by touching a wall or piece of furniture and not falling to the ground.

Five patients completed the study. Although all patients had advanced PD treated with STN DBS and refractory NLR-FoG, there was a wide range of disease severity (Hoehn and Yahr stage range 3–4; disease duration range 10–20 years; age 52-78). There was no significant treatment effect for the group in the primary outcome measure (FoG-Q). However, individual patient analysis showed that the number of freezing episodes decreased in three of five subjects post treatment (Table 1). The FoGQ and GFQ improved in two of five subjects, remained unchanged in two and worsened in one patient. The MDS-UPDRS total score improved in four of five patients (mean improvement 12 points) after six weeks of treatment (Table 2). Number of falls, as measured by the diaries, decreased in three of five subjects post treatment (Table 2). Clinical balance assessments did not change significantly as a group (BBS changed from 40 to 39.5 pre to post; and DGI changed from 12.6 to 11 pre to post).

Table 1: Change in Freezing of Gait. Freezing of Gait Questionnaire (FoG-Q) and freezing episodes documented in the patient diaries are represented here. Subject number 3 and 4 (marked by *) were considered responders.

Subjects’ self-selected walking speed and spatiotemporal characteristics increased up to week 5 (mean speed: 0.96m/s) in the group, then decreased again, although not back to baseline (Figure 1). Faster speeds showed greater progression toward the normal 60/40 stance to swing ratio. Further analysis of individual patients revealed two patients (marked with * in tables) improved in terms of velocity beyond the pre-determined minimal detectible change (MDC) [8]. We then looked at these two patients as a sub-group and found that step length and stride length increased while percent double support time decreased appropriately. When analyzing the other sub-group (three subjects who did not show improvement in velocity beyond the MDC), we saw the opposite trend, with a decrease in step and stride length and an increase in double support time (Table 3). 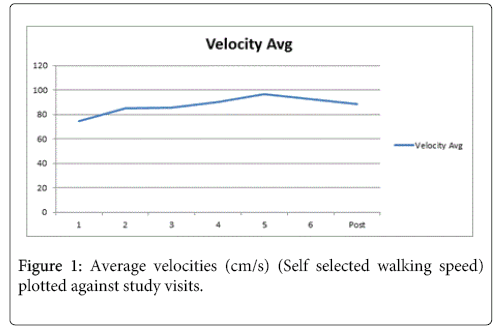 This is the first study, to our knowledge, designed to determine the effects of a forced exercise protocol in patients with NLR-FoG. We chose to study patients who had undergone bilateral STN DBS for two reasons: 1) they have good control of their dopa-responsive symptoms yet continue to experience disabling FoG, making them a practical model of NLR-FoG, and 2) with the increasing use of DBS in the treatment of PD, there is an increased need for the development of effective therapies for the treatment of FoG refractory to dopaminergic medications and DBS.

We were able to show that this protocol is feasible to perform in this patient population. Furthermore we confirmed prior findings demonstrating the positive effect of exercise on the motor symptoms of PD [9]. The study did not meet its primary endpoint of reduction in FoG severity as measured by the FoG-Q. In fact, multiple pilot studies have failed to meet primary endpoints when targeting FoG [10-13]. Possible explanations for this finding include: small sample size, lack of validated objective outcome measure of FoG, the heterogeneity of our cohort, and differences in phenomenology between the more commonly studied levodopa responsive FoG and NLR FoG.

Subgroup analysis revealed opposite trends in spatiotemporal parameters for responder and non-responder groups. Clearly, this has an impact on the findings of the group as a whole, cancelling out any individual effect. One patient in the non-responder group had worsening falls. This may be attributable to concurrent orthostasis, blepharospasm and advanced age (78 years old). More importantly, this finding highlights the fact that FoG is a heterogeneous phenomenon in a heterogeneous disease. Separating levodopa responsive FoG from NLR-FoG is the first step in characterizing these subgroups, however, other differences remain, which may predict response to treatment.

In the absence of a validated objective outcome measure for FoG, the use of objective measurements of spatiotemporal parameters can be a valuable surrogate outcome. We acknowledge these are not validated correlates of FoG severity, however, represent objective findings which responded, in some cases, to our intervention, and should be included in future studies expanding on these findings. The observation that all parameters moved in the same direction in responders and non-responders further supports their validity. These findings can help guide future studies aimed at further characterizing NLR-FoG and determining predictors of response.

This forced exercise protocol led to a robust improvement in global PD severity as measured by the total MDS-UPDRS in 4/5 patients, as well as a reduction in falls and freezing episodes in 3/5 patients. Although we were unable to capture a convincing benefit on NLR FoG as measured by the FoGQ in the group as a whole, insights into the heterogeneity of FoG were elucidated. Future studies to better characterize FoG, develop objective outcome measures, and develop effective therapies for NLR-FoG are warranted.

This study was supported by the Barmore Foundation for Research in Parkinson’s disease.