Copyright: © 2016 Dell’Edera D, et al. This is an open-access article distributed under the terms of the Creative Commons Attribution License, which permits unrestricted use, distribution, and reproduction in any medium, provided the original author and source are credited.

Background and Objective: Lactose is a disaccharide sugar and is found in mammals milk and derivatives. Lactose intolerance is the inability to metabolize lactose, because of a lack of the required enzyme lactase in the digestive system. Genetically the physiological hypolactasia (primary LM) is associated with the LCT-13910 C/T and LCT-22018 G/A polymorphisms. The aim of this study focused on the diagnosis and treatment intolerance or malabsorption of lactose in a cohort of 983 patients for the appearance of non-specific symptoms suggestive of a lactose intolerance.

Methods: The work was divided into the following phases: diagnosis of lactose intolerance or malabsorption; Check the incidence of primary lactase deficiency in the population Lucana (Italy); Evaluate the improvement of post-diagnosis symptoms and impact on quality of life (Q.O.L: Quality Of Life) as a result of enzymatic and/or food therapy in intolerant subjects. Evaluate the correlation genotype/phenotype studying variants -13910 C>T and -22018 A>G in LPH gene.

Conclusions: The lactose malabsorption is a condition widespread in Italy, but much less frequently is the syndrome of intolerance. Embarking on a diet that a priori excludes milk and derivatives, in the absence of a definitive diagnosis, it can have a negative impact on the welfare of the organism The genetic test is really simple and noninvasive, confirms or excludes a malabsorption and in particular circumstances provides a predictive test to detect primary hypolactasia long before of her clinical manifestation.

Lactose is a disaccharide sugar and is found in mammals milk and derivatives. The intestinal villi secrete the enzyme called Lactase phlorizin hydrolase (LPH) to digest it. This enzyme cleaves the lactose molecule into its two subunits, the simple sugars glucose and galactose, which can be absorbed and be available in the blood. The LPH is present predominantly along the brush border membrane of the differentiated enterocytes lining the villi of the small intestine. In humans, the lactase gene (LPH ) is encoded by the LCT gene. The LCT gene is 49.3 kb in length and located on the long (q) arm of chromosome 2 at position 21. It contains 17 exons and is translated into a 6 kb transcript [1].

There is growing awareness that the profound changes in diet occurred from prehistory to recently, on an evolutionary time scale, adjusted the human genome. In particular, during the Neolithic, humans showed low LPH activity due to a diet poor of lactose. At a later stage, the change in eating patterns and milk consumption resulted in a genetic mutation that overexpressed the LPH enzyme [2].

Recently, an analysis of linkage disequilibrium and haplotype construction [3] revealed, in the European population, a strong association of the two single associated SNPs with “Human Lactase Persistence”, located 14 kb (-13910 C>T) and 22 kb (-22018 A>G) upstream from the start codon of the LPH gene, in the introns 9 and 13, respectively of the adjacent gene Mini Chromosome Maintenance 6 (MCM6), enhancer of LPH promoter.

In order to get insight these genotypes, an LCT gene investigation of eight Neolithic people DNA found in bones (from 5500 to 5000 AC) revealed no mutation of gene accountable of Human Lactase Persistence [4]. From these data, the hypothesis of selection of individuals able to digest milk started only in the Neolithic with the pastoralism. This selection process determined two different phenotypes: the former lactase persistent and the latter with no lactase persistence.

The primary deficit consists of a physiological decrease in the enzymatic activity, especially in post weaning, depending on race and genetic factors. Until 2 years old, all children produce lactase in order to intake breast milk; progressively, the enzyme productions partially decreases and the lactose intolerance occurred and widely varied. The secondary deficit is a transient condition likely due to a pathological state that damages the intestinal villi and thus interfering with lactase absorption (i.e. acute gastroenteritis, celiac disease, inflammatory bowel disease, chemotherapy etc.); nevertheless after the epithelial healing, the lactase recovers its proper function. The aim of the present study was the diagnosis and treatment of lactose intolerance and malabsorption by observing a cohort of 983 patients with symptoms correlated to this disorder. This study is important because it represents the first research conducted in a region of southern Italy.

This study was conducted at “Unit of Cytogenetic and Molecular Genetics, Madonna delle Grazie Hospital, Matera, Italy”. 983 patients were observed after the lactose intolerance symptoms onset. The study was developed in the following moments:

A) Lactose intolerance and malabsorption diagnosis;

B) Analysis of the overall incidence of primary lactase deficit in the population from Basilicata Region (Italy);

C) Evaluation of the enzymatic and/or alimentary treatment impact on symptoms control and quality of life (Q.O.L) response in the intolerant subjects.

The study included 2 cohorts of patients:

i) With lactose intolerance to be genetically evaluated for the hypolactasia disease; after the diagnosis, the patients were trained to follow a proper diet and to exogenously intake supplemental lactase (7500 UI beta-galactosidase from Aspergillus oryzae ), kaolin (antidiarrheal) and fennel essential oils (antispasmodic);

ii) With lactose malabsorption for which it was not required to adjust their food intake. After several months from the diagnosis (2-18 months), the included patients were contacted (by phone or email) and invited to answer to a specific questionnaire concerning a post diagnosis symptoms and nutritional assessment.

Polymerase chain reaction (PCR) and reverse-hybridization. The procedure includes two steps: PCR amplification using biotinylated primers and hybridization of amplification products to a test strip containing allele-specific oligonucleotide probes immobilized as an array of parallel lines. Bound biotinylated sequences are detected using streptavidin-alkaline phosphatase and color substrates. The amplification and the reverse hybridization on a strip have been obtained with the use of commercial kits produced by Nuclear Laser Medicine (code AC079).

In Table 2 the observed phenotypes were reported by indicating with “lct” the mutated allele and with “LCT” the wild type allele. By measuring the allelic frequency in the 983 participants (1966 alleles evaluated), the analysis reveals that 1650 alleles (83,88%) showed -13910C SNPs associated to hypolactasia and 316 alleles (16,12%) showed -13910T SNPs associated to lactase persistent. The results revealed the presence, in single or double copy, of the “lct” allele (-13910C) associated to hypolactasia in the most of participants; this result agrees with the theory by Cavalli Sforza [5]: the hypolactasia is proper of the “wild type” individuals whereas the capability to digest the lactose derives from the “LCT” allele (-13910T) and represents a favorable mutation during the human evolution from the first pastoralism activities (10000 years ago).

Primary hypolactasia is a disease affecting a large number of subjects and is primary influenced by the ethnicity; in fact this condition is largely diffused in Asia, Africa and Australia [6] whereas the North-European population is immune to the disease. In Italy about 40-50% of the population deficits of lactase, especially in the southern regions (70% in Campania and Sicily) [7,8]. The present work reveals a 67.95% of participant with a positive homozygous mutation (-13910CC).

From the study findings, it is clear to us a significant improvement, after the diagnosis, of symptoms and Q.O.L. impact by adding an enzymatic and/or alimentary treatment in individuals with lactose intolerance: 82% of intolerant individuals experienced an improvement of symptoms and only 18% of subjects reported an unmodified symptomatology (Figure 1); the Q.O.L. improved in the 62% of individuals while 38% excluded a significant enhancement of their life conditions (Figure 2). 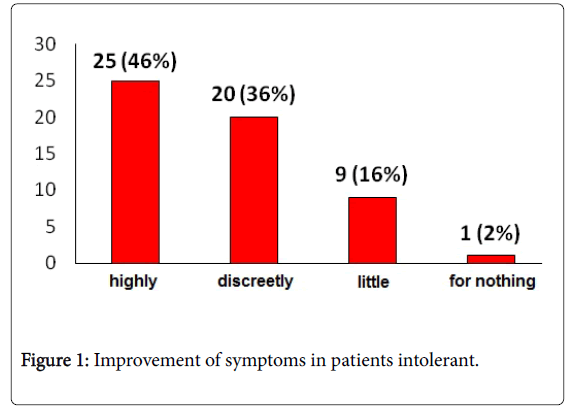 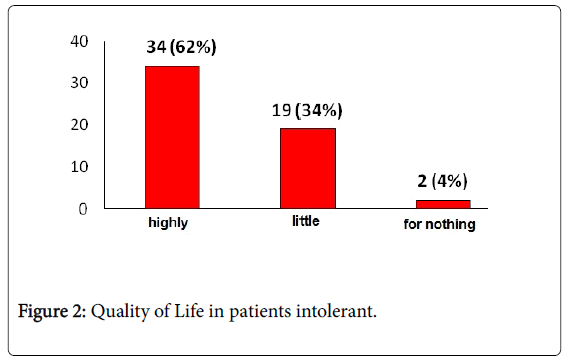 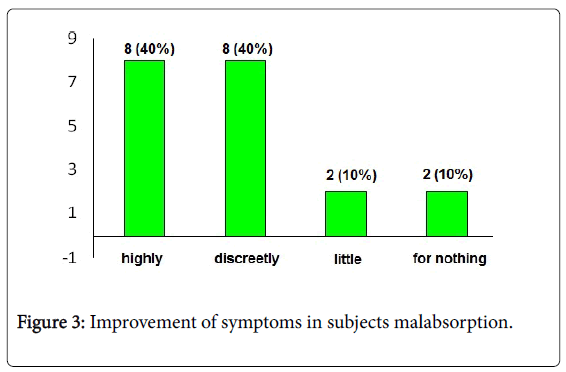 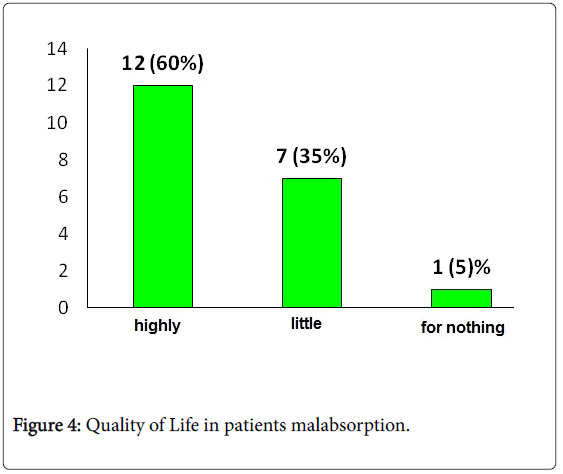 Surely it is less clear the reasons of that; we can only assert that the main factor may be due to the residual amount of lactase expressed in the small bowel. Nevertheless other parameters have not to be ruled out:

A) In individuals with lactose malabsorption, an increase of lactose assumption triggers the symptomatology.

B) The composition of the diet since it impacts on the gastric emptying: fatty acid decrease that time followed by proteins, fibers, and carbohydrates; iii) the bowel transit time since it influences the contact between lactase and lactose and thus its digestion: an inversely proportion correlates the 2 parameters.

Recently, other factors have been evaluated in order to investigate the intolerance onset in individuals with lactose malabsorption [9-11]. One for all is the quality/quantitative composition of bacterial flora in colon; the metabolic processes likely depends on these components. Finally, the placebo effect may influence the symptoms and have to be strongly considered in the patient’s diagnosis.

Lactose malabsorption is widely diffuse in Italy on the contrary of intolerance that for sure affects only a small percentage of population. Unfortunately several individuals reduced or even removed milk and derivatives from diet although not affected by the intolerance. For this reason, in cooperation with the medical staff, the biologist-nutritionist plays a fundamental role in the diagnosis of a real correlation between lactose and gastro-enteric symptomatology. This strategy may prevent improper diet and false diagnosis of lactose intolerance; indeed without a correct diagnosis, removing milk product from diet impacts on the well-being of subjects. These concerns were confirmed in this study that revealed 32% of interviewed individuals modified their diet before a molecular test and even 29% excluded milk products. As a whole, the genetic test is really simple and noninvasive, confirms or excludes a malabsorption and in particular circumstances may reveal an intolerance disease. This approach will be useful for diet management and finally for controlling the symptomatology of the disturb.

Written informed consent was obtained from all of the patients (including legal guardians of the children) for publication of this case report and accompanying images. A copy of the written consent is available for review by the Editor-in-Chief of this journal. Our local institutional ethics committee approved this study.

The authors have declared that no competing interests exist.