Rice is the most important food grain crop with regard to human nutrition and caloric intake. It is a staple food for more than half of the world population providing one fifth of calorie and 15% protein consumption [1,2]. In Ethiopia, the second populous nation in sub Saharan Africa, rice is the target commodity that has received a due emphasis in promotion of agricultural production. It is considered as alternative technology for farmers for efficient utilization of marginal resources [3]. Ethiopia has considerably vast suitable ecologies for rice production which is unsuitable for production of other food crops [4]. From this, the country has a potential of 3.7 million ha land for irrigated low land rice production [4]. Although the country has a high potential for production rice in irrigated areas, lack of adaptable varieties is one of the major problem. Until now only nine irrigated varieties had been released for irrigated environment [5]. The generation of adaptable varieties largely depends on the availability of desirable genetic variability for important traits [6].

Variability refers to the presence of differences among the individuals of plant population due to their genetic composition and the environment in which they are raised [7,8]. Genetic variability is the basis of plant breeding because any crop improvement depends on the amount and direction of genetic association of the traits in the base population [9,10]. It provides a wide range of genotypes that can be selected to develop new varieties [11]. Development of high yielding varieties requires the existence of genetic variability and genetic variability of agronomic traits is the key component of breeding programs for broadening the gene pool [10,12]. Selection will be effective when there is a significant amount of variability among the breeding materials [7]. The available variability can be measured using genotypic and phenotypic coefficient of variation which used to partition genetic and environmental variance [6,13]. Heritability used to assess the amount genetic improvement that will be transferred to next generation [14]. However, heritability coupled with genetic advance will be more powerful in predicting genetic gain than heritability alone [15,16]. In addition, knowledge about the association of traits with themselves and grain yield is also important for direct and indirect selection of traits which contributes to yield [10,16].

Therefore, the present study was conducted with the objective of assessing the genetic variability, heritability, genetic advance and association between yield and yield components of 64 rice genotypes.

The study was conducted in main Season (June to November) of 2016 at Werer Agricultural Research Center (WARC) experimental field. Werer is located 9°27’ N and 40°15’ E in northeastern part of Ethiopia which is about 280 km away from Addis Ababa. The altitude of Werer is 740 m.a.s.l. Fourteen years climatic data on monthly bases showed that the average maximum and minimum temperature in the region is 34°C and 19°C, respectively, and the annual total rainfall in the area is about 571 mm annually. The soil in the region is predominantly vertisol with the porosity and bulk density (0-25 cm depth) of 49.06% and 1.35 gm/cm2, respectively [17].

The experimental design was simple lattice design consisted of 64 (8 × 8) rice genotypes sown in two replications. The seeds (100 kg/ha) were directly drilled in the field in two rows of 30 cm spacing and 3 m row length. Phosphorus fertilizer was applied at sowing in the form of DAP (109 kg/ha). Nitrogen, in the form of Urea (219 kg/ha) was applied in two splits (half at tillering and the remaining panicle initiation). Irrigation water was applied every 4 days interval using furrow irrigation until the crop reached to physiological maturity. All other agronomic management practices were applied as per recommendation. The evaluated genotypes are listed below (Table 1).

Data for 7 agronomic and phonological traits were taken according to the standard evaluation system for rice. Data were collected for days to emergence (DTE), days to heading (DHE), days to maturity (DMA), plant height (PLH), number of effective tillers (ET), panicle length (Pl) and grain yield (GY). Observations were recorded on the plot basis for DTE, DHE, DMA and GY. For GY the yield harvested on plot basis and adjusted to 14% moisture content before weighting. All the remaining traits were recorded on the plant basis by randomly taking 5 plants in each plot.

The analysis of variance showed there was a very highly significant difference among the genotypes evaluated for all traits except for panicle length (Table 2). Similar results were obtained in studies of Sumanth et al. [7], Oniya et al. [13], Jambhulkar and Bose [20] and Mural, Sasalawad and Hittalmani [21]. This indicates the genotypes are highly variable especially those traits which showed significant difference. Thus, the possibility genetic improvement through selection is highly promising. The study by Idris and Mohammed [12] and Bekele et al. [22] reported similar results. High variability of breeding materials will increase the probability of producing desirable recombinants in successive generations.

According to Siva Subramanian and Menon [23] GCV and PCV more than 20% considered as high, whereas values less than 10% are considered to be low and values between 10% and 20% being considered to be moderate. According to this, most the traits have high to intermediate GCV and PCV (Table 3). This indicated that these traits could be improved for breeding high yielding rice varieties through selection and hybridization [7]. Grain yield had the highest environmental variance. However, the environmental variance in plant height (PLH) and days to heading (DHE) was very low. Similar findings were obtained by Rashid et al. [1], Pratap et al. [6] and Idris and Mohammed [12] who studied the genetic variability of different rice genotypes for yield and yield components.

The genetic variation result showed that phenotypic coefficient of variation (PCV) was relatively higher than genotypic efficient of variation (GCV). This result revealed that the influence of environment on phenotypic expression of each trait [12]. But the difference between genotypic and phenotypic coefficient of variation is very little for all studied trait except for days to emergence (DTE) which was relatively higher (Table 3). This shows the influence of environment in expression most of the traits is very small [9,10]. A little higher difference between PCV and GCV for days to emergence (DTE) indicates the influence of environment on DTE was relatively higher than other traits. This result was similar to studies of Rashid et al. [1], Sumanth et al. [7], Oniya et al. [13] and Tefera, Sentayehu and Leta [24].

According to Chalal and Gosal [30] characters with larger absolute value closer to unity with the first principal components influence clustering more than those with lower absolute value closer to zero. In the present study, the total variability in the genotypes is due to cumulative effect of a number of traits rather than the small contribution of each character. The positive and negative sign loading shows the presence of positive and negative correlation between the variable and the component [28].

In the present study sixty-four genotypes are grouped in six clusters based of the data taken (Table 7). Among the clusters, cluster IV comprised the largest genotypes (14 genotypes) followed by cluster II with 13 genotypes and cluster I with 12 genotypes. Cluster III, V and VI consisted of 10, 8 and 7 genotypes respectively (Figure 1). Days to emergence is almost similar across all clusters but Cluster VI, III and II are the latest in terms of days to heading and maturity (Table 6). Relatively the late maturing genotypes were found in cluster IV. The longest one among the six clusters was cluster IV. Effective tiller was a bit higher in cluster II but panicle length was almost similar across the clusters. Clear difference in grain yield was observed in the six clusters. Genotypes found in cluster VI was the highest yielder (5304 kg/ha) followed by cluster IV (4189 kg/ha) and Cluster III (3278 kg/ha). Crossing between promising genotypes of cluster VI and II may provide superior desirable segregates for developing high yielding genotypes. Also considering genotypes in cluster IV will provide genotypes with better height for breeding in addition to high yield.

Table 7: Clustering Pattern of 64 rice genotypes based on 7 yield and yield related traits. 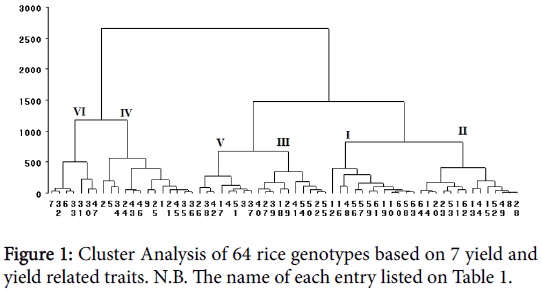 Figure 1: Cluster Analysis of 64 rice genotypes based on 7 yield and yield related traits. N.B. The name of each entry listed on Table 1.

The overall result showed the presence of adequate variability in the genotypes studied. This variation could be effectively manipulated using appropriate breeding techniques and program to develop improved varieties. High estimate of heritability and genetic advance were observed in most of the traits, indicating the predominance of additive gene action and the possibility of direct selection through these traits. The phenotypic correlation and principal component analysis showed most of the traits evaluated are important for selection of high yielding genotypes and contributing their share for the wider genetic variability of the genotypes. Although some of the results did not agree with the previous findings. Therefore, it is advisable to repeat the experiment by adding more important traits in representative irrigated areas of the country, especially in irrigated low lands.

We acknowledge the national rice research program for funding the experiment. We also acknowledge cereal breeding caste team research technicians for data collection and other supports.

Copyright: © 2018 Girma BT, et al. This is an open-access article distributed under the terms of the Creative Commons Attribution License, which permits unrestricted use, distribution, and reproduction in any medium, provided the original author and source are credited.