Giant Localized Pseudopolyp of the Colon as the First Manifestation of Inflamatory Bowel Disease: A Case Report and Literature Review

Copyright: © 2014 Filip R, et al. This is an open-access article distributed under the terms of the Creative Commons Attribution License, which permits unrestricted use, distribution, and reproduction in any medium, provided the original author and source are credited.

Pseudo polyps are very common in the course of ulcerative colitis and Crohn’s disease. Patients with long history of inflammatory bowel disease are known to be at higher risk of malignancy. Giant colonic psedopolyps are sometimes mistaken for carcinoma which may potentially lead to unnecessary surgery. We describe a case of a 62- year-old man with a large localized inflammatory lesion of the sigmoid colon. The clinical presentation of this rare tumor-like lesion, which can be considered as a localized giant pseudo polyp of the colon, mimicked malignancy or polypoid cavernous hemangioma. What is also unique in this case, is that no definite past history of inflammatory bowel disease could be demonstrated.

Pseudopolyps are very common in the course of ulcerative colitis (UC) and Crohn’s disease (CD), it may also be incidentally detected in the case of colonic ischeamia or infections. They usually originate from parts of the bowel which previously passed non-specific mucosal or/and submucosal inflammatory processes. Due to the fact, that they are formed during the regenerative and healing phases during chronic inflammatory bowel diseases (IBD), the alternative term used is ‘postinflamatory’ polyps [1-4].

Although psedopolyps can be found throughout the entire large intestine they are mostly seen in the descending and transverse colon. Some of the post-inflamatory polypes form circumferential, rarely obstructing lesions which have a filiform surface. Giant pseudopolyps, defined by a diameter or height N15 mm, are relatively rare [4]. They may present a variety of clinical symptoms, including bleeding; however, they can even more frequently be asymptomatic and an incidental endoscopic finding. What is of importance here, is that in a population of patients with a long history of IBD, who are known to be at higher risk of malignancy, giant colonic psedopolyps are sometimes mistaken for carcinoma, which may potentially lead to unnecessary surgery.

A 62-year-old forestry worker, was referred to a local clinic due to musculoskeletal pain with the suspicion of Lyme disease. He had no medical history of IBD or lower gastrointestinal symptoms except rectal bleeding lasting for a couple of weeks, which was not accompanied by diarrhea. He also had no noteworthy medical or family history, including IBD, tuberculosis and GIT malignancy. There were no abnormalities in the physical examination and the vital signs were normal. In the general peripheral blood tests, the leucocytes were 7,250/µL, hemoglobin was 13.9 g/dL and platelets 179,000/µL, and ESR 7 mm/h. Other clinical tests, including the Lyme disease serology (ELISA and Western blot), were also normal. Abdominal ultrasound examination, as well as enhanced computerized tomography (CT), showed no abnormalities. Endoscopic examination of the large bowel showed a hyperemic and multilobulated mass in the sigmoid colon that mimicked polypoid adenocarcinoma and villous adenoma. Moreover, due to its atypical, intensive purple color, a polypoid cavernous hemangioma was also considered. Nevertheless, the observed lesion was not amenable to endoscopic resection (Figure 1). Pathology revealed chronic colitis within the lesion with the signs of active chronic colitis. Moreover, micro extravasations and pseudiomelanosis within the lamina propia were also visible (Figure 2). There was no evidence of malignancy or dysplasia. Distally from the lesion, an approx. 7 cm long fragment of the colon with inflammatory changes with less active disease (Mayo UC score: 1) was visible, but with microscopical evidence of chronic colitis. There were no features of Crohns disease (CD) within the whole colon. 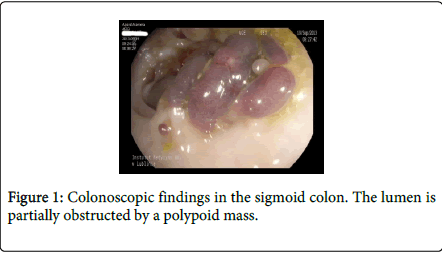 Figure 1: Colonoscopic findings in the sigmoid colon. The lumen is partially obstructed by a polypoid mass.

The patient was then referred to the surgery department with the intention of performing radical treatment. However, after the colonoscopy combined with the partial resection of the lesion, the patient was discharged home with the recommendation of surveillance colonoscopy in a year’s time. Histological examination of the specimens confirmed the previously diagnosed inflammatory pseudopolyp.

Pseudopolyps occur in 12.5-74% of patients with UC, and about twice as often in these patients as compared to patients with CD [5]. The most common localizations are both the transverse and descending colon. According to Maggs et al., who reviewed 81 reports of giant pseudopolyps in patients with IBD, there exists a strong link between the incidence of giant pseudopolyps and the extend of IBD [6]. On the other hand, the interplay between the occurrence of pseudopolypes and the time and course of the disease has not yet been elucidated. However, some of the data suggest they may occur at the early stage of the UC, irrespective of whether it is the quiescent or active phase of the disease. Moreover, based on the study describing the 48% incidence of pseudopolyps in UC patients who required proctocolectomy, one could conclude that there exists a strong association with the severity of the disease [7]. Localized giant pseudopolyps usually remain asymptomatic until they cause rectal bleeding, diarrhea, luminal obstructions and intussusceptions which, in fact, are very rare. Generally, in both UC and CD patients, the endoscopic picture of pseudopolyps is characteristic, although adenomatous polyps, cap polyposis, neoplasms, as well as an infectious background, e.g. cytomegalovirus (CMV), should be also taken into consideration. Therefore, superficial mucosal biopsies are crucial in the differential diagnosis, since in psedopolyps with a IBD background, the results are normal, usually reflecting re-epithelialisation of the mucosa. What is of importance is that in patients with a long history of UC, the existence of a dysplasia associated lesion or mass (DALM) is very probable, and only precise, multiple biopsies can distinguish between DALM’s and ‘normal’ pseudopolyps. However, based on over 70 reported cases in the literature where no dysplastic changes and only one adenocarcinoma associaded with pseudopolyps was found, the possibility of DALM or/and malignancy is relatively low [1,4,8-24]. Although pseudopolyps themselves are benign, the existence of pseudopolyps is known to be an independent marker of increased risk of colorectal carcinoma in UC. Moreover, the possibility of tissue sampling errors is higher in the case with large lesions that can be incompletely visualized [25-27]. On the other hand, in patients without a reliable former history of IBD, pseudopolyps may also be cofounded with polyp-like adenocarcinomas, which may lead to clinical pitfalls and delays in necessary surgery.

To the best of our knowledge, this case represents a very rare example of localized giant pseudopolyp in a patient without a previous history of IBD. Although data about the clinical course and any medical therapy of IBD in this particular patient are lacking, on the basis of two independent histology reports and the endoscopic picture of the inflammatory changes within the mucosa found in sigmoid colon distally from the lesion, we conclude that the described lesion was probably the first manifestation of the UC. It remains unclear whether specific factors, such as the patient age, size of the lesion, or the duration or activity of the patient’s disease, could determine whether a localized giant pseudopolyp is more likely to become displastic. There exists only one reported example of self-regression of the giant pseudopolyp; therefore, the natural history of these lesions, as well as their optimal management, has not been elucidated to date [5]. Surgical resection is still the only option when giant pseudopolyps present with obstructive symptoms, or when they cannot be removed by polypectomy, or when they cannot be fully visualized during endosopy. Therefore, in the presented case, given the patient’s age (older than 60 years), with no previous history of IBD, the endoscopical features of the polyp are consistent with a villous tumour, giving that surgical treatment could be questionable. Neveretheless, in most cases, the proper diagnosis can be made by colonoscopy and multiple biopsies, and the follow-up colonoscopic evaluation of giant pseudopolyps for surveillance should be always considered due to a relatively higher risk of malignancy in the course of IBD.

We descrcibed a case of a 62-year-old man with a large localized inflammatory lesion of the sigmoid colon. The clinical presentation of this rare tumor-like lesion, which can be considered as a localized giant pseudopolyp of the colon, mimicks malignancy or polypoid cavernous hemangioma. Contrary to similar reports in the literature, no definite past history of IBD could be demonstrated.

The authors wish to express their thanks to Dr Krzysztof Sikora from the Department of Pathology, ALAB plus, Warsaw, Poland, in the field of pathology and for sharing Figure 2. 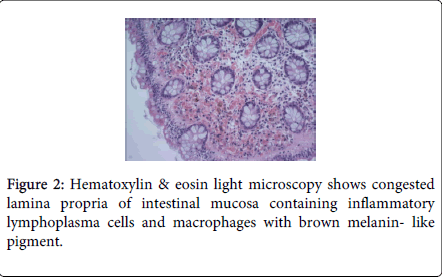