Copyright: © 2014 Liu T, et al. This is an open-access article distributed under the terms of the Creative Commons Attribution License, which permits unrestricted use, distribution, and reproduction in any medium, provided the original author and source are credited.

Autism spectrum disorder (ASD) is the fastest growing developmental disorder in America with an estimated 1.148 % growth rate [1,2]. As reported by the DSM-5, ASD is characterized by a range of social and communicative impairments as well as repetitive behaviors [3]. Although language, social, and cognitive differences are characteristics of ASD, motor difficulties have also been noted [4,5].

Motor impairment is not a part of the diagnostic criteria for children with ASD. However, the abundance of research literature reporting motor delays in children with autism is significant [6-16]. Early diagnosis is critical to early educational interventions which have been found to be an effective treatment for mitigating symptoms of ASD in children and even present a promising possibility for prevention [5,17,18]. Thus, researchers are increasingly considering the importance of motor function regarding issues in ASD diagnosis due to the observable motor impairment trend [19-25].

Gross motor skills are fundamental skills necessary for movement competence and considered the basic building blocks for more complex motor skill development [26,27]. Gross motor skills refer to goal directed movement patterns that allow children to move through space and respond in a suitable way to a variety of stimuli using larger musculatures [20,28]. Mastery of these skills is prerequisite to successful introduction of specific sports and games [28,29].

To our knowledge only three studies have been reported measuring gross motor performance of children with ASD using the TGMD- 2 compared to standardized normative data or typically developing children; yet, these studies have some methodological limitations and inconsistencies. For example, Berkley, et al. studied the locomotor and object control skills on 15 children (10 boys and 5 girls) with high functioning autism (HFA) (aged 6-8) [6]. It was reported that 80% of children with HFA (all girls and 7 boys) were placed in the poor and very poor categories.

In contrast, Pan et al. [13] compared locomotor and object control skills of children with HFA (aged 6-10), children with attention deficit hyperactivity disorder (ADHD), and age matched typically developing children. The authors reported that 5% of children with HFA and ADHD had a mean locomotor subtest score that was equal to or more than 1.5 standard deviations below the mean. These scores placed 16% of the participants with ASD and ADHD in the very poor and poor performance categories. However, only boys with HFA were included in the study which was not a true representation of autism spectrum and therefore limited the findings to be generalized to the ASD population.

Based on the few studies that have compared children with ASD to their typically developed peers, it is clear more research is needed to reconcile the inconsistencies and fill the gaps in the literature. Therefore, the purpose of this study was to compare the gross motor skills of children with and without ASD (aged 5- 10) using the TGMD- 2. It was hypothesized that children with ASD would show motor delays in overall gross motor quotient scores, and locomotor and object control standard scores when compared to their age matched typically developing children as measured with TGMD-2.

A total of 21 children with ASD (aged 5-10, M=7.57 years) and 21 age matched typically developing children (M=7.38 years) participated in this study. The children were recruited through advertisements and personal contacts from local schools. All children with ASD were originally diagnosed by their psychiatrists or a licensed psychologist using DSM-IV [3]. Eight children had a diagnosis of Asperger Syndrome, seven had a diagnosis of autistic disorder, and six had a diagnosis of pervasive developmental disorder-not otherwise specified. Typically developing children attended the same schools as the children with ASD. Participants’ demographic information is presented in Table 1. Participating parents were informed of their rights and the nature of the task, and were asked to sign a consent form prior to their child’s participation. The study was approved by the local University Institutional Review Board. Children with ASD were included in the study if they had (a) been diagnosed with ASD, (b) ability to follow directions, and (c) ability to perform the requested gross motor skills (Table 1).

Table 1: Demographic Information of the Participants on Age and Gender.

Test of Gross Motor Development-2 (TGMD-2): The TGMD-2 is a norm and criterion-referenced test that assesses the gross motor ability of children aged 3-10 years. TGMD-2 measures performance of 12 gross motor skills [30]. There are two subtests, locomotor subtest (run, gallop, hop, leap, jump, and slide) and object-control subtest (strike, dribble, catch, kick, throw, and roll). The TGMD-2 has shown evidence of validity and reliability among children [30]. Raw scores from each subtest can be converted to standard scores from the standardized norms and overall gross motor quotient scores (combination of all 12 gross motor skills)are convertedfrom the sum of the standard scores. The standard scores and quotient scores are described as very superior, superior, above average, average, below average, poor, and very poor [30].

The TGMD-2 was administered for all children at a local elementary school gym by the investigators. To ensure the accuracy of the assessments, sessions were videotaped. Each child received verbal descriptions and demonstrations prior to the gross motor skill performance. Participants were also provided additional directions if they did not seem to understand the first time. Children were asked to perform each gross motor skill twice. Parents were given the opportunity to provide written consent form and children signed assent form if they were eight years or older. All children completed TMGD-2 motor assessments.

Descriptive statistical analyses were used to describe the TGMD- 2 data. Performance raw scores were recorded for two testing trials. Children were given a “1” if they met the performance criteria. Otherwise, they received a zero. TGMD-2 locomotor and object control raw scores were then converted to standard scoresfor each subtest and the overall gross motor quotient scores using the TGMD-2 conversion tables in the manual. A MANOVA was conducted on TGMD-2 two subtests’ standard scores and overall gross motor quotient scores to compare motor performance of children with ASD and their age matched typically developing children. Results were considered significant if p values were less than.05 and effect sizes (ES) were determined for practical significance using Cohen’s d [31].

For the locomotor subtest, about 67% children with ASD were given poor standard scores of ≤ 5 and 40% of scores were classified very poor (≤ 3).There were 60% of the participants with ASD that had poor standard scores of ≤ 5 and 33% of scores were very poor (≤ 3) on object control skills, as described in the TGMD-2 manual. For overall gross motor quotient scores, about 81% of children with ASD w`ere below 79 and classified as poor and about 76% children scored below 70 and received very poor rating. In addition, children scored at or below the 30th percentile were considered developmentally delayed as indicated in the Individuals with Disabilities Education Act [32]. Therefore, 91% of children with ASD in the current study were considered developmental delayed for their gross motor skill performance and in need of early supportive interventions. The majority of typically developing children’s standard scores (96%) falling the average or higher ratings. 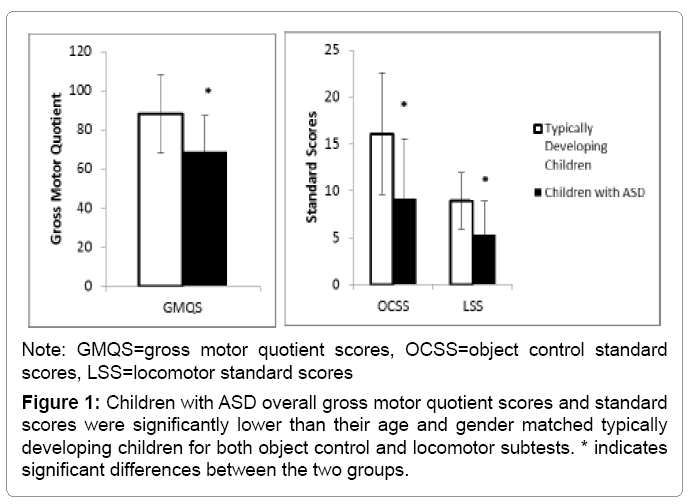 The effect sizes (ES) describing motor delays of the study participants between the two groups were large on locomotor subtest (ES=1.12), object control subtest (ES=1.07), and overall gross motor quotient scores (ES=1.00). The large ES (>.80) results were in agreement with the statistically significant findings indicating that the true effect of the performance differences in two populations might be large.

This study has several important implications. First, the results of this study are valuable for educators, therapists, and practitioners with an interest in children with ASD. The participating children with ASD, regardless of how they were classified, demonstrated delays in gross motor skill performance. This information is critical to the design of appropriate intervention programs that can effectively address the delayed object and locomotor skill performance.

Secondly, although there is a plethora of research in ASD, there remains a lack of studies in the area of motor skills research. Scientific studies and empirical evidence is necessary to help educators and practitioners to design effective early intervention programs for children with ASD. In addition, studies to inform evidence-based practices for intervention are also necessary to move the field forward.

Thirdly, it is important not to underestimate the influence of motor development on other areas of development. In fact, well developed gross motor capacities may facilitate children’s cognitive functioning, language development, social communicative skills, and contribute positively to daily life skills [19,21,33,34]. Therefore, it is paramount that we understand the gross motor performance of children with ASD.

Finally, the significance of motor proficiency for children with ASD should not be overlooked. From an ecological systems perspective, locomotion and object control skills are the basic fundamental motor skills in which children interact with their environment and other children. Providing a therapeutic intervention program includes those gross motor skills that may positively impact children with ASD’s movement competence and social skills.