Copyright: © 2017 Hoogar P, et al. This is an open-access article distributed under the terms of the Creative Commons Attribution License, which permits unrestricted use, distribution, and reproduction in any medium, provided the original author and source are credited.

The current article has produced as a part of Ph. D. thesis entitled “A study on Health Seeking Behaviour among Halakki Vokkalu Community of Uttara Kannada District, Karnataka.” In this article the term tribe has been used invariably and instead of the term Community. Health is a prime priority in every tribe/community and every part of the globe. Every society has a patterns to deal with situations followed by many socio, religious and geographical factors. Multiple medical streams are serving simultaneously through their own mode of methods. Every medical system is and should work as complementary to other. The availability, accessibility, and affordability of any treatment or medicine plays very important role in the selection of treatment and medicine from. The main objectives of this paper are: 1) Briefly making an academic account of the Halakki Vokkalu tribe of Karnataka; and 2) To briefly explain about Health Seeking Pattern of Halakki Vokkalu Tribe.

The current article has produced as a part of Ph. D. thesis entitled “A study on Health Seeking Behaviour among Halakki Vokkalu community of Uttara Kannada District, Karnataka.” In this article the term tribe has used invariably and instead of the term Community.

Health is a common theme in most of the cultures; in fact, all communities have their own concepts of health and illness as part of their culture. Based on their earlier experiences with illness, various training on symptoms, different people of different societies has different conception of health. What is considering as being healthy in one society might not be consider so healthy in another. In the same ways the pattern of seeking health will also be change among different tribes or communities Illness perception on the one hand and treatment choice on the other are interdependent (Rake 1961:205). Health behaviours are a set of actions that the elderly perform to ensure they eat and keep well, and protect, promote and maintain health [1,2].

‘Halakki Vokkalu’ is a small group in Karnataka and is settled down in four taluks of Uttara Kannada district namely Karwar, Ankola, Kumta and Honnavar. They are thickly populated in and around Ankola and Kumta taluks.

Halakki Vokkalu is mild, sober and economically poor people. In Karnataka they are considered as very backward community and placed in the category I group (Government Order No. SKE 225 BCA 2000, dated 30-03-2002) [3]. In the 2001 census Halakki Vokkalu are mixed with the other backward communities. Hence, it is very difficult to authentically about their total population.

Derivation of the Name

According to Bhat, the name ‘Halakki’ probably because, these people are asked to sprinkle milk and rice at the marriage procession of Having Brahmin to prevent evil eye on the newlywed couple. According to the people, acquisition of the name may be due to their occupations like agriculture and dairy work. There is no unanimous opinion regarding the origin of the term [5].

As mentioned in beginning itself this has produced as a part of Ph. D. research. That was a mixed research method study, but observations, interactions with respondents at the field and critical observation of data has used for this article. This is more of explanatory note of observed situations and mostly very general pattern found among the studied community.

Health seeking behaviour is preceded by a decision-making process that is further governed by individual and/or household behaviour, community norms and expectations. For this reason, the nature of care seeking is varied depending on cognitive and non-cognitive factors that call for a contextual analysis of care seeking action. This context may include factors such as cognition or awareness, as well as socio-cultural and economic factors.

The health seeking pattern directly dependent on health seeking behavior. In the present paper authors just wish to provide the pattern generally followed by the Halakki Vokkalu tribe. How they respond to an illness episode, how and what decision they take to address that illness, what is their preference of taking treatment for those are the concerns of this article. If there is an illness episode they directly don’t go to the any Medical Specialist, they decide the treatment sources on the bases of illness, intensity of illness, severity of illness then they try to get cured from different modes [6-10]. If one is not effectively resulted gradually shift to another to resolve that particular illness. Observations and interactions with respondents were put together and tried to understand with anthropological perspectives, then the pattern which has presented below appears. It is a commonly existing pattern among Halakki Vokkalu. These are the some cues observed at field were motivated authors to write this article.

The following diagram shows health seeking pattern of Halakki Vokkalu tribe. The diagram says that In case of any illness Halakkis do not directly go for any kind of treatments. They leave that to be cured by it. They wait for some time if they get result Yes just lead routine life then there is no question of taking further treatment. If the result is No, then they move to the step of Mane maddu (Homemade) or Kai maddu (Handmade) medicines.

In this stage try to medicate them at home by using some techniques of Patthe means avoid some food stuffs during illness episode or taking some foods and beverages. After this if result is No, they opt for medicine from counter.

Halakkis collect medicine from counters. The counters were General Shops and Medical Shops (Chemist). The observation from field acknowledges the fact that availability of medical shops is comparatively less than any other general shops. If here also they do not get cured, they will be going for popular practitioner sector. Popular practitioner means the lay, non-professional, nonspecialist domain of the society which is treating for many illnesses since a long back. Halakkis go to these people because they live among and nearby, especially at rural areas where majority of the professional or trained doctors do not prefer to be there and serve in these places. It is purely an issue of availability, accessibility and affordability of a specialist of a treatment. Hence the preference for specialist treatment is at last they try to get out from the illness episode through their prior preferences of treatment gradually shift from one to other [11].

Halakkis sought treatment for their illness from one of the sector mentioned above then they lead routine life. Along this pattern of health seeking they follow one more practice that is magico-religious treatment or healing. Every treatment travel along with this parallel practice of healing. It means whichever treatment they opt till homemade medicine practice to treatment from professional doctors the magico-religious practices will be performed and it will be a fixed element (Figure 1). 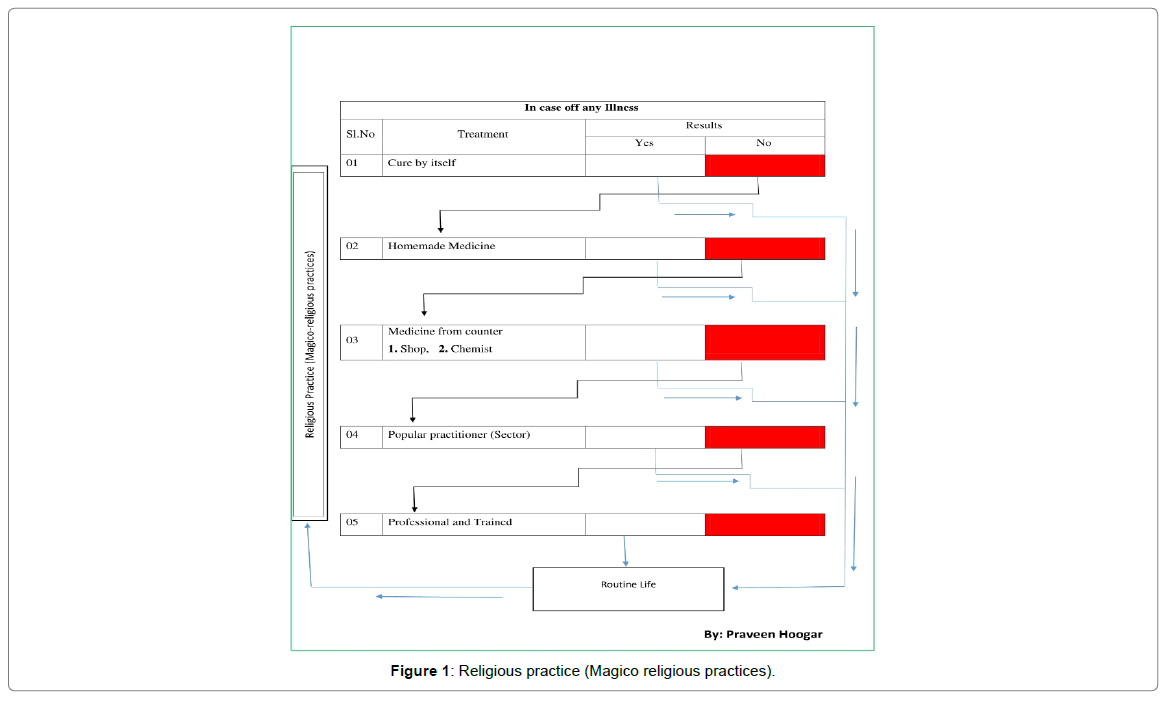 This is the pattern found among the Halakki Vokkalu tribe’s seeking health. This shows that they have their own style of identifying, diagnosing and treating an illness. The parallel system of seeking health is continuing with very strong beliefs and practices, according to a respondent because, it provides a moral and psychological strength and support to both patient and family. By this patient’s belief in treatment and medicine get stronger and stronger. Once patient gets enough belief in treatment and medicine his mind starts reacting positively to the treatment and it results with cure. The respondent’s statement denotes that the importance of psychological consideration for any treatment and medicine leads to proper responding from the patients. Wish to conclude this article with all sort of treatments have got their own set of pros and cons, they must work in complimenting to each other instead of any contradictions. Of course it is true that each type of sectors have very different style of diagnosing, treating and following-up the cases but the motto behind those is and must be one that is the betterment of mankind. We don’t support any ill practices in the name traditional or indigenous medicine, but the concern is many of illnesses/disease are successfully treated by traditional or indigenous medicine. It has to be recognized and used in public health sector by which more numbers of people get benefited in terms of health and finance.

Authors acknowledge the each and every member of the community Halakki Vokkalu for their cooperation and constant support during the research work.