Copyright: © 2016 Shetty A, et al. This is an open-access article distributed under the terms of the Creative Commons Attribution License, which permits unrestricted use, distribution, and reproduction in any medium, provided the original author and source are credited.

According to the Center for Disease Control (CDC), Type II Diabetes Mellitus (DMII) currently accounts for 90-95% of all diagnosed adult cases of diabetes in the United States [1]. African Americans, Hispanics, American Indians, some Asians, and Pacific Islanders are all at an increased risk for developing diabetes. In addition to race, it has been documented that other factors such as obesity, physical inactivity, insulin resistance, and genetic factors all increase the risk of developing DMII [2]. The frequency of the disease is on the rise in the US, which is of concern considering the CDC estimates that complications related to DMII leads to $245 billion in direct and indirect medical costs annually [1].

The CDC estimates that 13.2% of the cases of DMII diagnosed in the United States from 2010-2012 were African Americans while only 7.6% were Caucasians. Currently the magnitude of the disparity between the incidence of DMII among African Americans and Caucasians is of debate among researchers, although the majority does agree that a disparity does exist. A detailed literature review was also performed in order to identify behavioral, socioeconomic, educational, and managerial disparities among Caucasians and African Americans in order to participate in the discussion of the impact of these factors on populations.

According to Brancati et al. [4] approximately 50% of the excess risk among the female African American population may be attributed to modifiable risk factors that include higher BMI, higher daily caloric intake, higher systolic and diastolic blood pressure, and decreased physical activity in African Americans than their Caucasian counterparts [4]. Reduction of these modifiable risk factors may reduce the risk of development of DMII by 50% among African American women. Another study conducted by Kokkinos et al., [5] assesses the association between exercise capacity and mortality in African Americans and Caucasians with DMII [5]. Results showed that reduced exercise capacity was a strong indicator of increased mortality risk among African Americans. These studies suggest that early intervention by primary care providers and physiotherapists may reduce not only the morbidity and mortality associated with DMII among the African American population but also the incidence of the condition itself.

Currently there are a multitude of studies concerning the factors associated with the development of diabetes among African Americans. Based on the current literature, it is quite evident that there is not enough research on the disparity in health care utilization between Caucasians and African American patients with DMII. Therefore, the purpose of our study is to identify differences between utilization of health care services including primary care, physical therapy, and inpatient services among Caucasians and African- Americans.

Additionally, this study investigated lower extremity amputation rates among Caucasians and African Americans as this is a direct indication of improper management of the condition and the possibility that primary care and physical therapy services were not successfully utilized. It is hypothesized that there is a difference between health care utilization among African-Americans and caucasians in the United States which leads to inadequate management of the condition and complications related to the condition.

The research design was a retrospective demographic study. Data was obtained from the Medicare database via the Center for Medicare and Medicaid Services (CMS). The first sample consisted of subjects with DMII who were randomly collected from the 2006-2008 databases. This sample consisted of both males and females, and included 181,857 Caucasians with a mean age of 69.4 ± 2.85, and 29,527 African Americans with a mean age of 69.1 ± 2.83.

The second sample included men and women from 2009-2011 from 187,127 Caucasians with a mean age of 69.26 ± 2.87, and 31,063 African Americans with a mean age of 69.13 ± 2.86. T-tests with a 0.05 level of significance were used to assess the differences between those two sample sets for the number of hospital visits, the length of stay, the number of physician visits, and the number of outpatient physical therapy visits. Chi-Square test was used to assess the frequency of amputations at a 0.05 level of significance.

Table 1: Disparity in health care utilization among caucasians and african americans from 2006-2008.

Table 2: Disparity in health care utilization among caucasians and african americans from 2009-2011.

Diabetes Mellitus is an ever growing threat to the medical health of at risk individuals across the globe. This disease has been documented to be affected by factors such as obesity, physical inactivity, insulin resistance, and genetic factors. In addition to these factors (Figures 1-5), disparities have been identified in DMII between African Americans and Caucasians that increase the severity of DMII among African Americans. The results of this study show that Caucasians utilized outpatient primary care and physical therapy services more frequently than their African American counterparts. On the other hand, African Americans experienced more hospital stays, more lengthy hospital stays, and higher rates of lower limb amputations when compared to Caucasians. 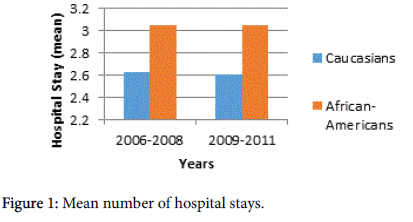 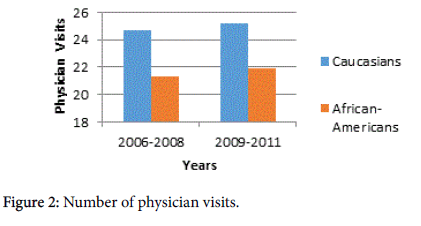 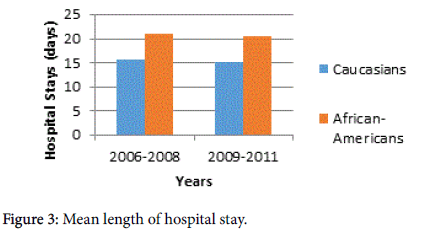 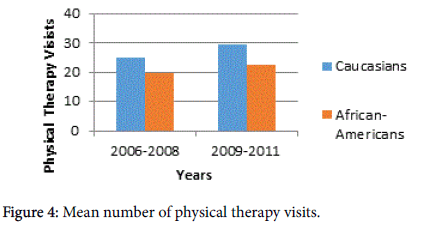 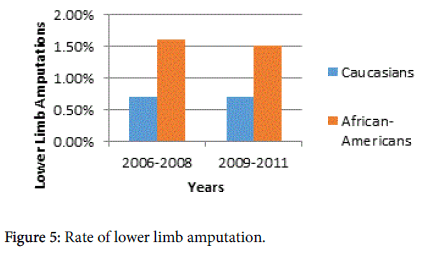 These findings could suggest that Caucasians are more likely to follow up with physicians and physical therapists more frequently, potentially preventing secondary complications. According to a study conducted by Armstrong and colleagues in 2013, African Americans had higher levels of health care system distrust than their Caucasian counterparts, which could contribute to the decreased follow-up rate [6]. This distrust included self-reported experiences of discrimination outside of the health care system, as well as, within it and distrust regarding the honesty and motives of the health care provider. All of these self-reported factors were associated with lower rates of suggested disease prevention and treatment of acute and chronic illnesses.

In combination with disparities in physical therapy and physician visits among caucasians and African Americans, other factors including genetics can lead to increased lower limb amputations and increased hospital stays among the groups. Based on research conducted by Brancati et al. [4] African Americans are predisposed to obesity leading to greater complications from DMII [4]. According to the U.S. Department of Health and Human Resources in 2014, African Americans were 1.5 times as likely to be obese as Non-Hispanic Whites [7].

This genetic variance was beneficial to fight against starvation during periods of famine, however in environments with excessive sources of food this gene becomes disadvantageous. Since African Americans are genetically predisposed to obesity, the population is consequently at greater risk for advanced DMII complications leading to increased hospital stays and lower limb amputations. Along with genetics, physical activity has been shown to be an important factor that influences the advancement of DMII. A recent study reviewed the BMI mortality paradox and fitness in African American and Caucasian men with DMII [8]. They looked at BMI, fitness, and mortality in men with DMII in order to explore the racial differences between them.

There was a greater reduction in mortality in the two highest BMI groups with increasing fitness. Meaning, even if you had additional risk factors in combination with a high BMI you were more likely to have reduced mortality versus others with additional risk factors but increased fitness habits. This study indicates that if African Americans increased their physical activity then they could potentially reduce comorbidities that are leading to faster advancement of DMII. Brancati et al. [4] reports that African American women were found to have higher BMI, higher dietary caloric intake, higher systolic and diastolic blood pressure, and reported less physical activity than Caucasian women [4]. These disparities in genetics and activity level could explain the greater maintenance and faster advancement of DMII among African Americans.

Health insurance coverage could also deter African Americans from following-up on health care appointments and seek preventative care measures. The National Center for Health Statistics collaborated with public and private health partners in 2013, to ascertain the disparity in race and insurance coverage [9]. The interview showed that African Americans had a higher percentage of individuals without health insurance at the time of the interview compared to Caucasians, with 18.9% and 10.6% respectively. Another study conduct by Hu et al., investigated the rates of diabetes care in different racial and ethnic groups, as well as socioeconomic groups. Caucasians were shown to have the highest rates amongst all racial groups in having their hemoglobin A1C measured, their cholesterol checked within the past year, and yearly retinal eye examinations [10]. Also, the study exhibited that individuals with higher socioeconomic status had the highest rates in all categories, including foot examinations in the past year, and the results were significant in regard to having hemoglobin A1C measurements taken and blood cholesterol checks performed. Clearly lower rates of utilization of these preventive services among African Americans could accelerate the rate of progression of DMII leading to greater rates of hospital admissions, increased length of stay, and increased lower extremity amputation rates.

A clear disparity exists in the utilization of health care between Caucasians and African Americans for DMII. Caucasians are more likely to utilize their physicians and physical therapists, while African Americans are more likely to visit hospitals, stay longer in hospitals, and have lower limb amputations. There are various proposed explanations for the differences in the prevalence and management of DMII including genetics, SES, and other modifiable factors. More research is required to assess the exact contribution of these factors to the disparities. Additionally, since the passage of The Patient Protection and Affordable Care Act (PPACA), more commonly known as Obamacare, future research should examine whether the health discrepancies will decrease due to changes in patient coverage.