Objective: The aim of study was to evaluate the heart rate variability (HRV) changes in children operated on for congenital heart disease (CHD), and specifically in those who had an atriotomy, comparing them to a control group.
Methods and results: HRV was measured in 54 young children (28 male/26 female) who underwent surgery for CHD, as well as in 51 children in a control group. The low-/high-frequency ratio was the only significantly increased parameter (1.8 +/– 1.39 versus 1.25 +/– 0.88; p=0.01) in the group of children operated on. We also studied the effect of an atriotomy on HRV. There was no statistically significant difference in this group.
Conclusion: HRV is decreased in children after surgery for CHD compared to the control group, but atriotomy does not seem to play a direct role in this modification.

We can predict that autonomic nervous system (ANS) activity will be modified in patients who have undergone surgery for CHD. Numerous studies have consistently shown that heart surgery, especially after repair of a tetralogy of Fallot [4-7] and Fontan surgeries [8-10] leads to a significant reduction in heart rate variability. A decrease in parasympathetic tone or increase in sympathetic tone predisposes to the development of arrhythmias and leads to a higher risk of sudden death in CHD [11,12].

Moreover, it is well demonstrated that a decrease in HRV eventually may appear not only as a consequence of decreased activities of sympathetic and parasympathetic branches of ANS, but also as independent metabolic phenomen, related to possible impairment of cardiomyocytes, especially cells of sinoatrial node (SAN) that may be less responsive to the neural and humoral impacts [13].

In this single centre, retrospective study we report heart rate parameters on 54 patients with CHD who had undergone surgery and a control group of 51 young patients with structural normal hearts (Figure 1). Patients with factors that could influence the modulation of the HRV were excluded from the study, this included patients with left ventricular dysfunction and treatment with antiarrhythmic dugs and beta-blockers. 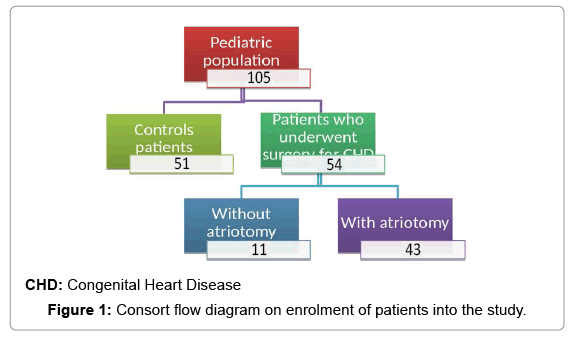 Figure 1: Consort flow diagram on enrolment of patients into the study.

Electrocardiography, echocardiography and 24 h Holter monitoring were analysed. In the group of patients with heart disease who underwent surgery, there were 28 males and 26 females. Mean age at surgery was 2.57 +/– 3.3 years (median 0.72, minimum 0.01, maximum 15.34). Twenty patients underwent surgery for a left-to-right shunt, 11 for a single ventricle, 9 for right ventricular outflow tract obstruction, 5 for left ventricular outflow tract obstruction, 6 for transposition of the great vessels, 1 for Ebstein’s anomaly and 2 for double discordance (Figure 2). These patients were divided into two groups: the first had surgery with atriotomy and the second had surgery without atriotomy. 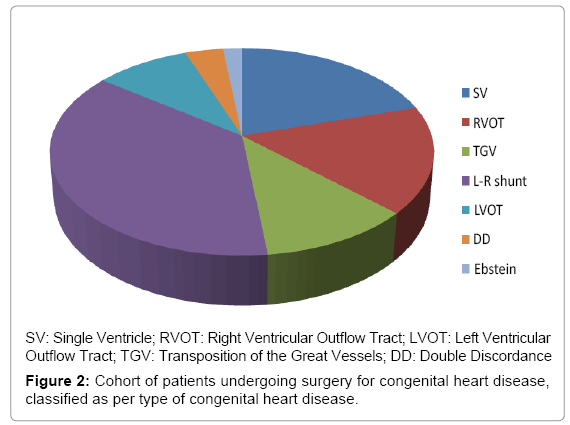 All the patients were in sinus rhythm at the initial evaluation. Patients on anti-arrhythmic agents and those with a rhythmic anomaly on Holter monitoring were excluded. Echocardiography showed good systolic function in all patients, with an ejection fraction of greater than 60% and no significant valvular anomalies.

Structural heart disease and underlying arrhythmias were ruled out in the control group by clinical examination, electrocardiography and echocardiography.

Data are expressed in frequencies for the nominal variables and in mean +/– standard deviation or median +/– interquartile for the continuous variables.

A multivariate regression analysis was used to compare the two groups undergoing surgery and the control group. A non-parametric Mann-Whitney test was used to compare the two surgical groups, with and without atriotomy. A p value of less than 0.05 was considered to be statistically significant. The statistical analysis was performed using SPSS software (SPSS Inc., Chicago, IL, USA).

24 h Holter monitoring was used to analyse the HRV. The assessment included a frequency-domain analysis and a time-domain analysis, as recommended by the Task Force of the European Society of Pacing and Electrophysiology [14]. The frequency-domain analysis includes the low frequency component (LF), the high frequency component (HF), the total power (TP) and the low/high frequency ratio (LF/HF). Time-domain analysis parameters include the average duration of the RR intervals (RR), the standard deviation of totality of RR intervals (SDNN), the standard deviation of the RR intervals in 5 min segments analysed over 24 h (SDANN), the number of intervals in which the difference between successive RR intervals was greater than 50 ms divided by the total number of RRs (pNN50), and the root mean square of successive differences (RMSSD), all measured in milliseconds (Table 1). The pNN50, the RMSSD and the HF reflect parasympathetic activity. The TP expresses global variability [15]. There is disagreement about the significance of the LF; some authors believe it to be a marker of sympathetic activity, while others consider it to be influenced by both sympathetic and vagal activity.

Table 1: Indicators of heart rate variability in the surgical group: comparison between patients with atriotomy vs. non-atriotomy surgery.

Patient’s clinical and electrocardiographic features are shown in Table 2. There was no significant difference in terms of age, sex, average heart rate and PR interval. QRS and QT intervals were longer in the children who underwent surgery in comparison with the control group (p<0.01).

The different parameters of HRV were compared (Table 3). The only parameter that showed a significant statistical difference was the low/high frequency ratio (LF/HF), which reflects the sympathetic– parasympathetic balance; this was higher in patients who had had surgery for CHD in comparison with the control group (1.8 +/– 1.39 versus 1.25 +/– 0.88; p=0.01).

Table 3: Indicators of heart rate variability in the patients with and without operated congenital heart disease.

In the group of children who had undergone surgery, there was no significant difference between those whose surgery included an atriotomy and the group without atriotomy.

This study shows that there is a reduction in HRV after surgery for CHD in young children, but it was unable to demonstrate that surgical atrial incision had an effect on this reduction.

Following heart surgery, the main factors responsible for postoperatory arrhythmias include surgical scars, haemodynamic status and the action of the autonomic nervous system. Butera et al. [4] demonstrated significant reduction in HRV in the setting of a decrease vagal tone in a study including 39 patients after Fontan procedure. Davos et al. [16] showed that autonomic nervous system dysfunction persisted for a long time after a Fontan procedure.

Previous studies evaluating the topography of the cardiac ganglia in the adult heart, have demonstrated the presence of sympathetic ganglia at the junction of the superior vena cava and the right atrium, at the level of the sinoatrial and atrioventricular nodes. Other ganglia are present at the junction of the atrium and appendage and on the anterosuperior wall of the right atrium. Extensive manipulation of atrial tissue during heart surgery, as is the case in Fontan procedures, can damage the intracardiac ganglia or the postganglionic nerve endings innervating the sinus node and the atrioventricular node.

Different factors have been found responsible for the decrease in HRV in the postoperative period. Some of them are related to the administration of medications in the post-operative time, such as betablockers, flecainide and propafenone. Others are related to structural and functional changes, in particular the presence of post-operatory myocardial dysfunction [14]. Extracorporeal circulation may also cause an imbalance in the ANS, either due to the secretion of catecholamines, to partial vagal denervation by surgical damage or to ischaemia, as demonstrated by Bronner et al. [17].

Shusterman et al. [18] showed that the pattern of changes in the RR intervals, rather than the absolute value of the indices, contributes to arrhythmogenesis in the adult population. Because of this, the LF/HF ratio is considered to be a strong predictor of arrhythmias [19].

There is limited literature on the effects of open heart surgery in HRV in the young age. Our study focuses on the evaluation of the heart rate changes in a population of children after congenital heart disease repair. It demonstrates that there is a significant difference in the LF/ HF ratio after surgery for CHD in children when compared to a control group. This change in the sympathetic – parasympathetic balance seems to be independent of the presence of an atrial incision during the surgical procedure.

Unlike complex heart surgery – in particular Fontan-type operations, which necessarily involve extensive atrial manipulation – most of our surgical population was represented by non-complex procedures without extensive atrial scars. Moreover, the acute effect of extracorporeal circulation was not evaluated since the Holter analysis was carried out an average of 6 years after operation. not demonstrate a direct effect of atriotomy on this reduction. The effect of atriotomy remains to be proven by other studies.

Copyright: © 2017 Hami K, et al. This is an open-access article distributed under the terms of the Creative Commons Attribution License, which permits unrestricted use, distribution, and reproduction in any medium, provided the original author and source are credited.